Christmas is fast approaching, and around this time each year I like to grab some bits and put together a tree decoration, just for the fun of building something different. 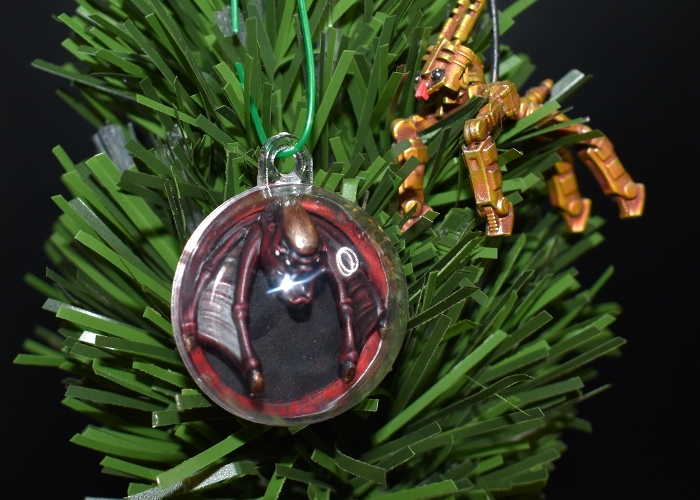 This year's decoration uses half of a plastic DIY bauble, an iris hatch from Terrain Sprue #2, and a Karist Minnow. 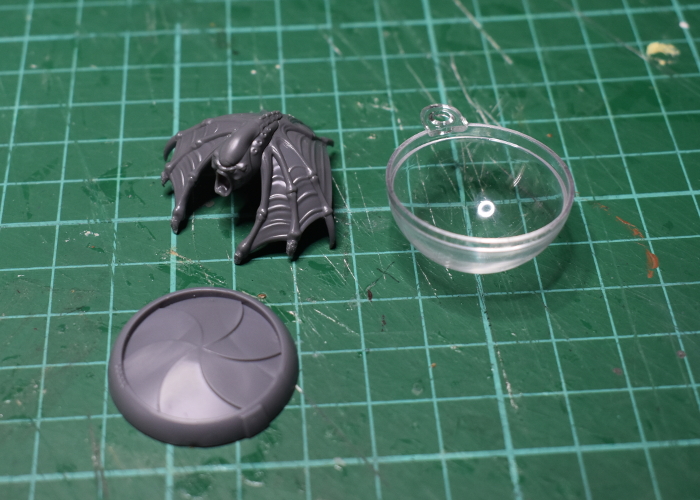 To get the minnow to fit inside the bauble half, I needed to remove a chunk of the body and wings. After trimming down the claws a little, I sat the front of the minnow inside the bauble and used a black paint pen to mark around the outside edge. Then I cut through the minnow along that line using a razor saw. 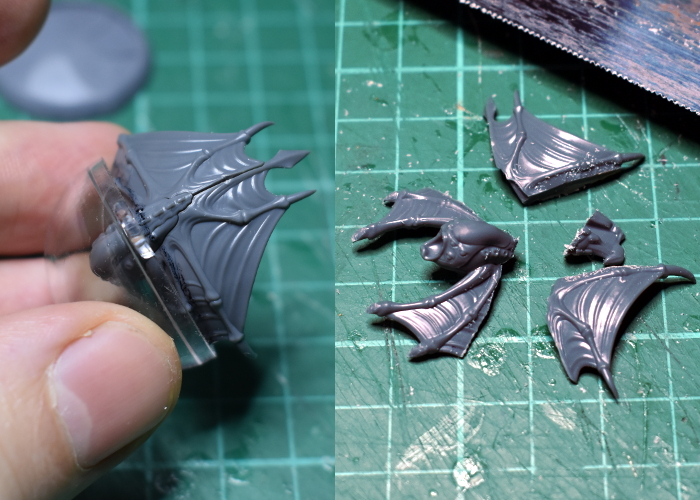 After a light sand to smooth down the cut, I glued the minnow onto the back of the iris.

For painting, I went with a suitably Christmassy red and gold, rather than the usual black and purple for the minnow. The whole thing (less the bauble half) was sprayed with Army Painter Dragon Red, and then the Minnow given several generous coats of Dark Tone. The back of the iris piece was painted black, and the isis petals with Plate Mail Metal and washed with Dark Tone. The red parts of the iris were sponge weathered using Vallejo Heavy Charcoal, and the gold painted with Coat D'Arms Bright Gold and washed with Army Painter Mid Brown. Once everything was painted, I glued the bauble half in place, and the decoration was ready to go. 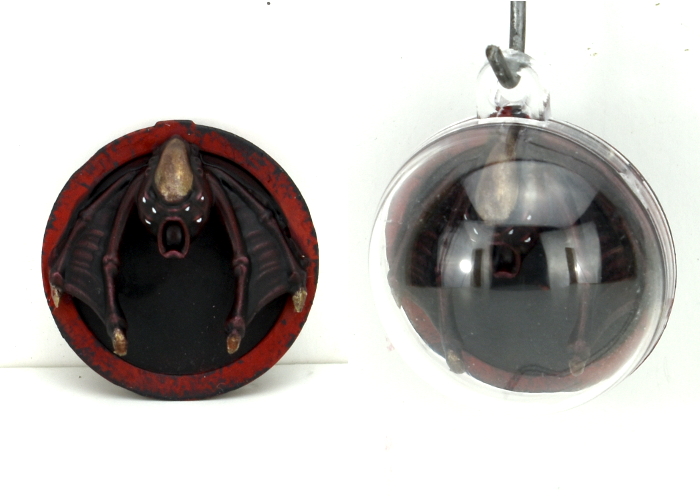 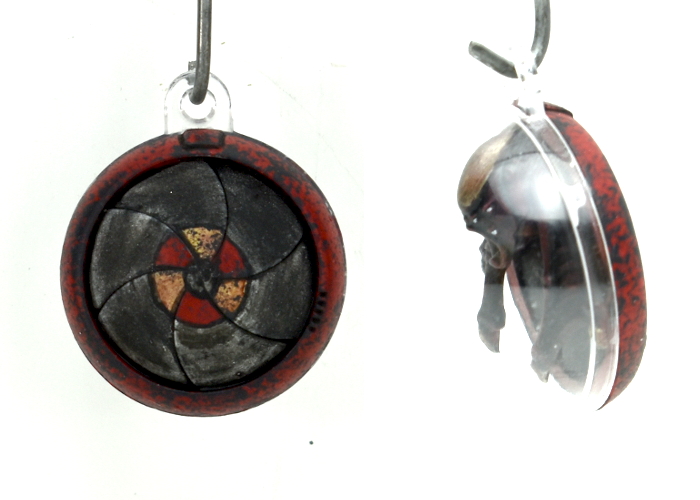 Put together your own Christmas Bauble of Doom by picking up any of our plastic or resin kits from the Maelstrom's Edge webstore here.

You can also find the previous Christmas kitbashes here, here, and here.

Wishing you all a Merry Christmas, and health and happiness for whichever holidays you observe at this time of year!

With Christmas fast approaching, I took a break this week from my ongoing underhive building project to put together my now traditional, annual Christmas ornament build. In previous years, I've built a bauble and a hanging star, and so this time around I thought I'd try something a little different, and build a robot reindeer! 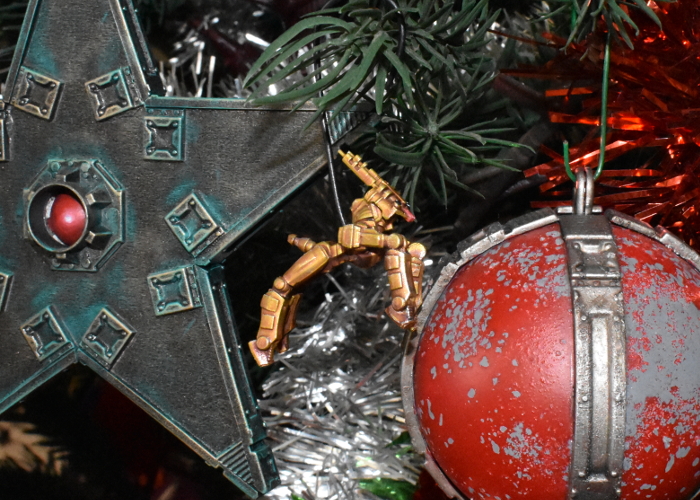 This construct used most of an Epirian Scarecrow, including both head pieces, and the lower legs and feet from a second. 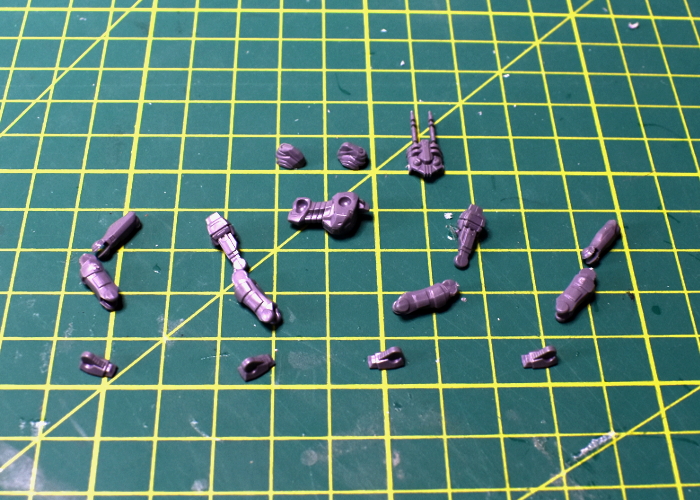 I trimmed the toes off the feet to give them a stubbier look. I wasn't aiming for a direct representation of a reindeer here, just something that gave the general impression. 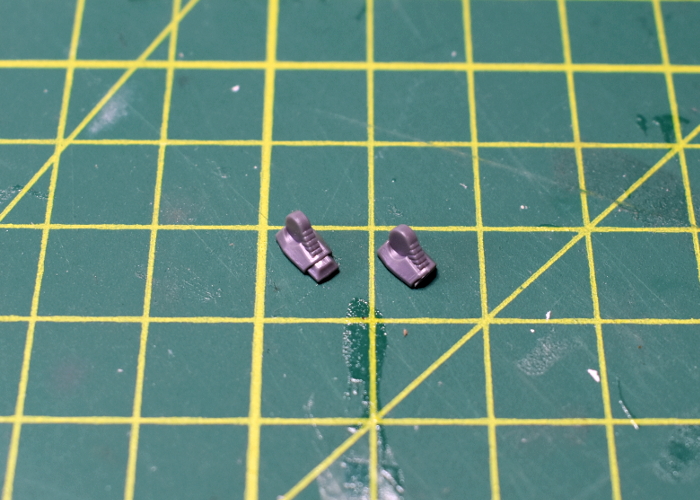 The torso, oriented horizontally, needed a suitably bulky neck to mount the head on, so I trimmed the tank mounting ridge off the Sacrecrow's back and glued both heads on as below. 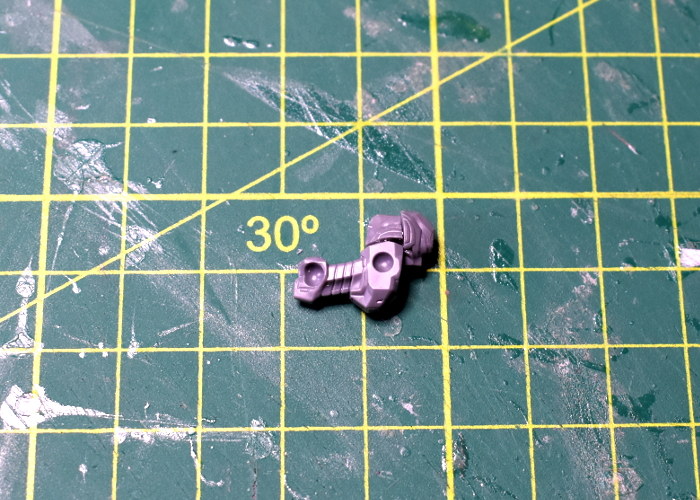 I then assembled the legs. For the forelegs, I used the Scarecrow's upper arms, and attached the knee disks from the second set of shin pieces onto the insides of the elbow disks. I also drilled a 1mm hole in the back of the torso and glued in a piece of wire for hanging the ornament. 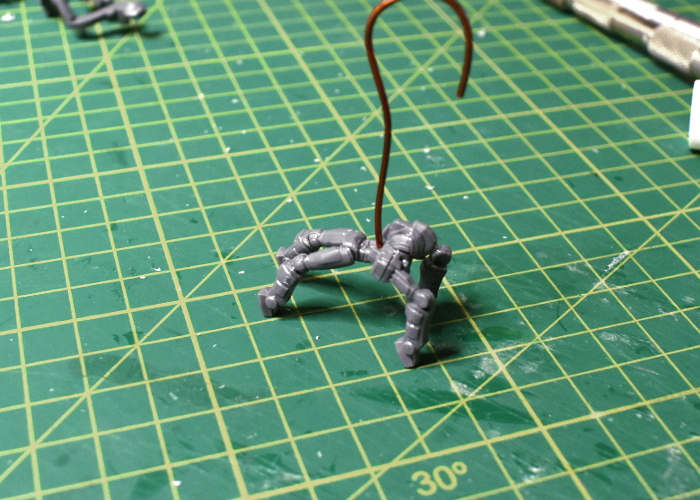 I then glued the command array onto the new neck for a head, and added a tail cut from the muzzle of a chemtech sprayer. 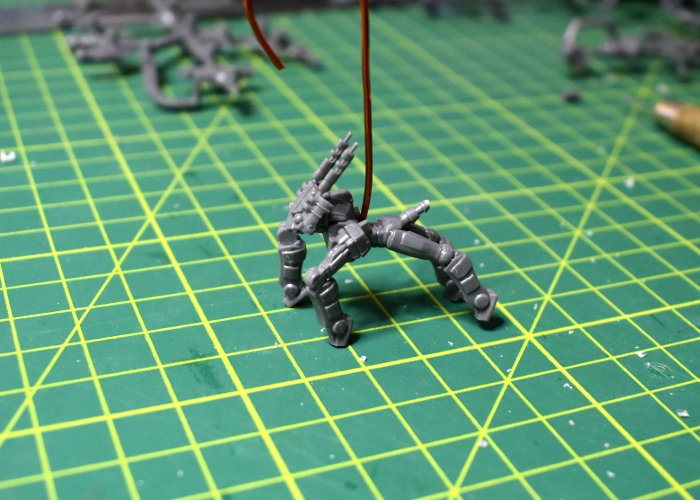 To paint, I gave it a base spray with Army Painter Plate Metal. I followed this up with a coat of Citadel Iyanden Yellow Contrast paint, and then a layer of Army Painter Light Tone. When this was dry, I finished up with a light drybrush of Vallejo Silver and then painted in the eyes and nose with black and red. I also gave the wire a couple of coats of black, to keep it looking neat.

With that, it was ready to join the previous years' decorations on the tree. It's a little goofy looking, but was a lot of fun to put together! 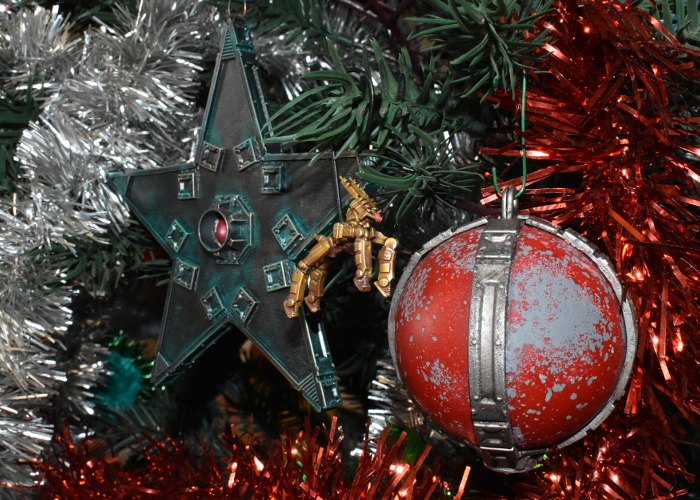 Merry Christmas from all of the team here at Spiral Arm studios, and have a safe and happy time with whichever celebrations you happen to find yourself a part of at this time of year!

To build your own Scarecrowdeer, you can pick up the Epirian Scarecrow kit, along with the rest of the Maelstrom's Edge range, from the webstore here.

Last year, just for something different, I made a Christmas ornament out of a plastic bauble and some components from the Maelstrom's Edge terrain sprue. I thought it might be fun to continue this each year, and so with that time of year upon us once more, I broke out the sprues and some foamed PVC, and came up with this: 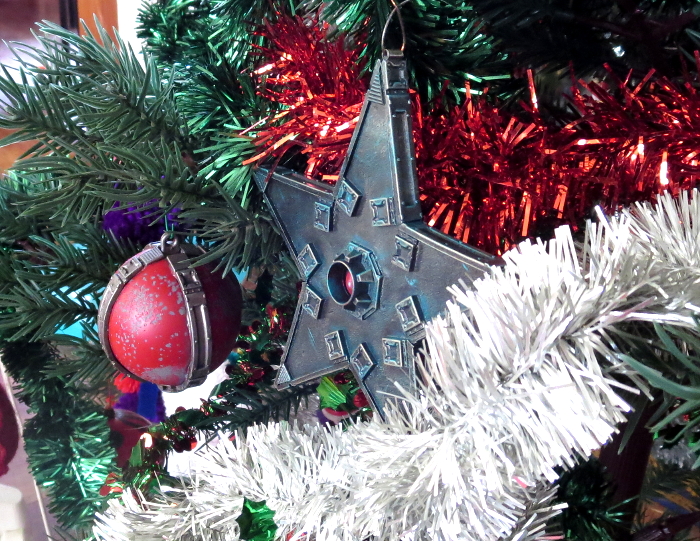 For the main part of the star, I cut two stars out of 3mm foamed PVC - a single 6mm star would have been easier, but the 3mm was what I had to hand. 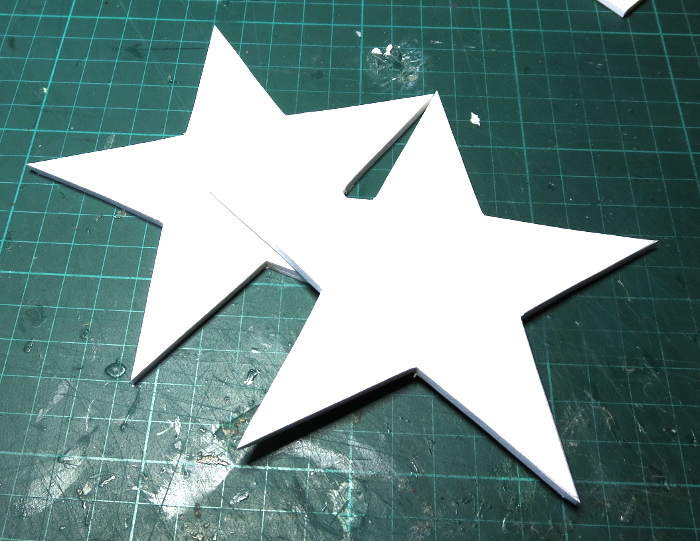 I glued the two stars together with superglue, and trimmed around the edges to make sure they lined up. 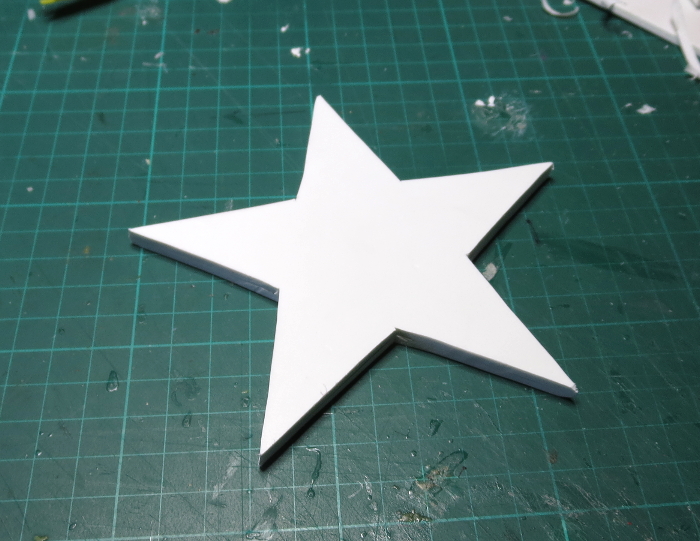 In the middle of the star I drilled a 13mm hole, and glued a marble in the middle. 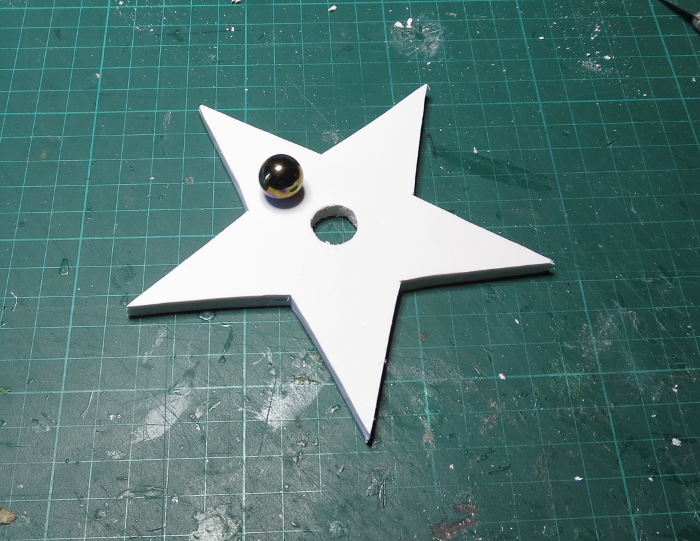 To run around the outside of the star I took ten support struts from the terrain sprue and cut them down into segments. 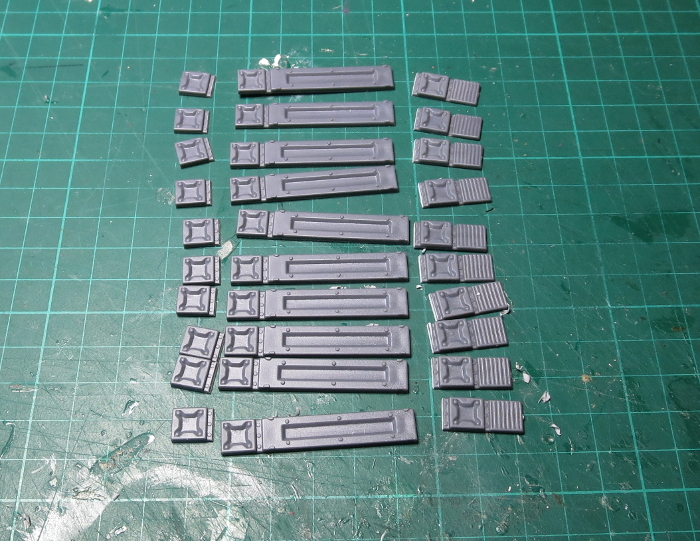 The long segments were trimmed up to fit and then glued around the outside. I used the short segments to add internal bracing, and cut the vents into wedge pieces to fit into the points of the star. Finally, I added a large pipe fitting on either side to bracket the marble. 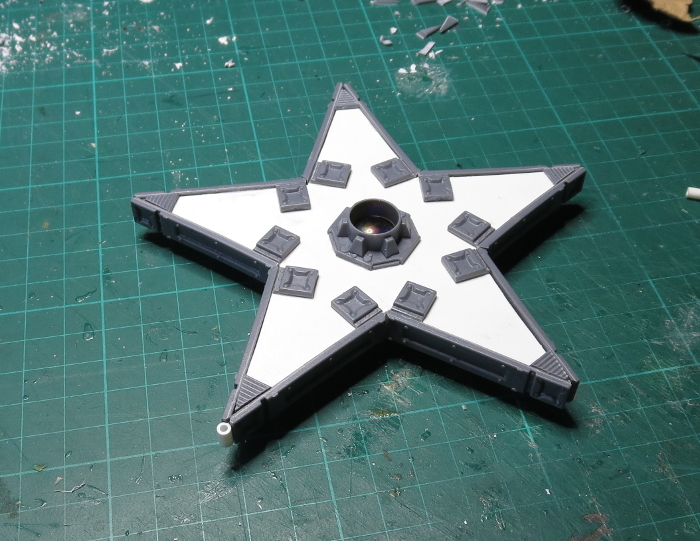 To paint, I started out with some Rustoleum Oiled Bronze spray. 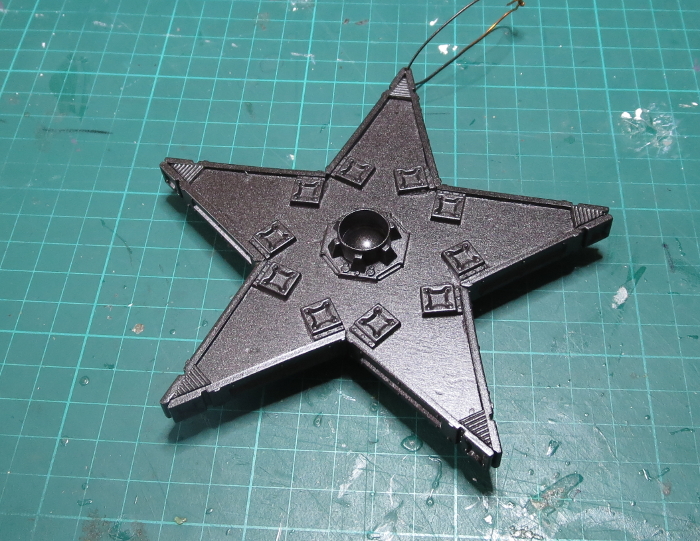 Over that, I added a heavy drybrush of Coat D'Arms Bright Gold.

I used a drybrush of Vallejo Emerald to add verdigris wherever it looked appropriate. 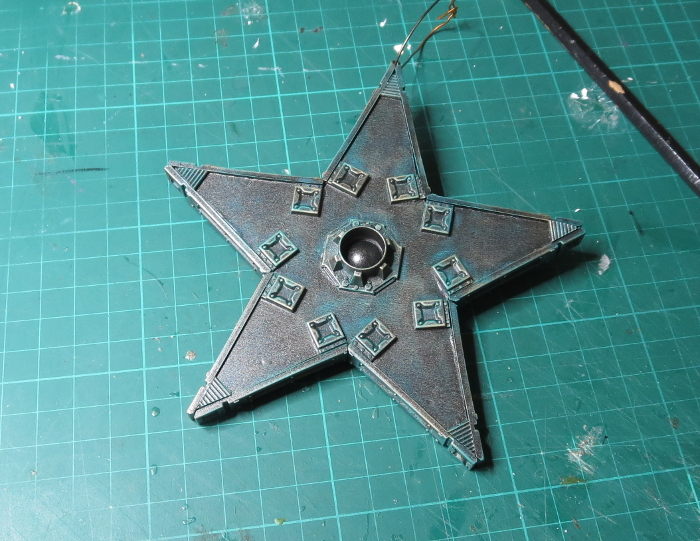 The final step was to paint the marble. I went with red to keep the Christmas vibe going. I used a blend of Vallejo Red and Army Painter Pure Red, with a highlight of white and a little Army Painter Purple Tone to shade around the outside. 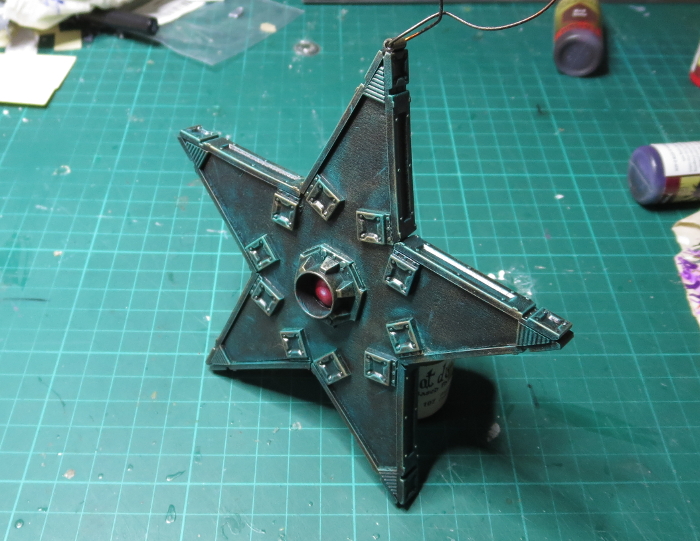 To build your own festive constructs of doom joy, you can pick up the terrain sprue along with the rest of the Maelstrom's Edge model range from the webstore here.