Last week, I shared part 1 of an Epirian Bot army that I've been putting together, which you can find here. This week, I'm fleshing it out with a second detachment, to bring the force up to the 120 point mark, suitable for small games. 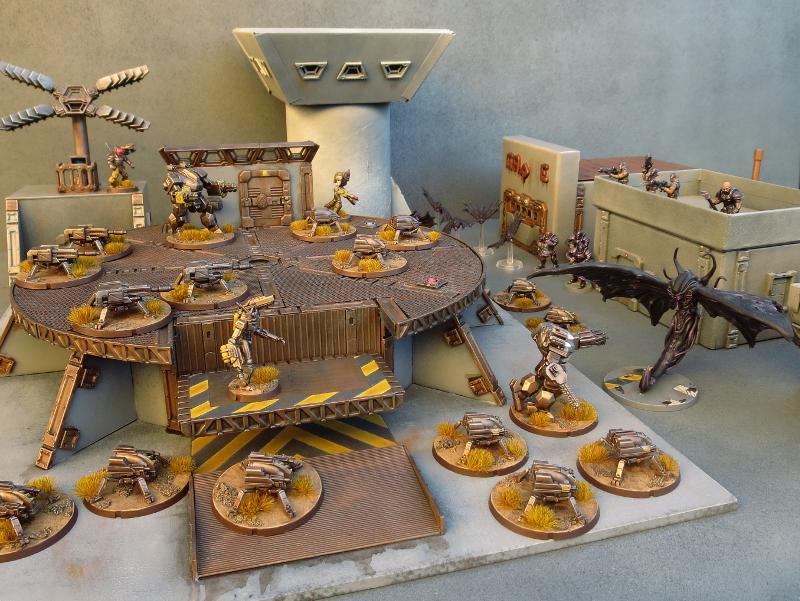 Unsurprisingly in a bot-themed force, the second detachment is comprosed of a whole bunch of extra robots! 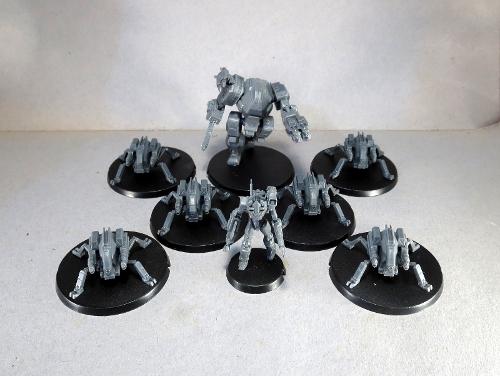 To keep with the bot theme, I wanted the second Command unit to be a Scarecrow rather than another Bot Handler. 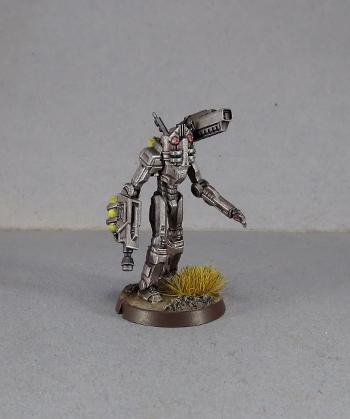 Scarecrows are shifted to a Command slot if you give them a Command Array. That's slightly problematic, since I've been using the Command Array part to put masks on my Scarecrows. I got around this by taking one of the aerials that had been cut off the array and gluing it onto the side of the Scarecrow's head, behind the mask. 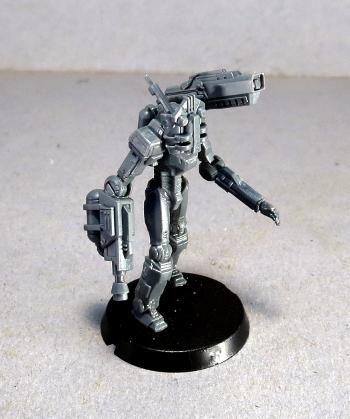 The Scarecrow commander is required to take at least two Core units, so I needed another two units of Spider drones. This time around, I went with Flakk Guns instead of the Cutters, for a bit of close-range supporting fire. 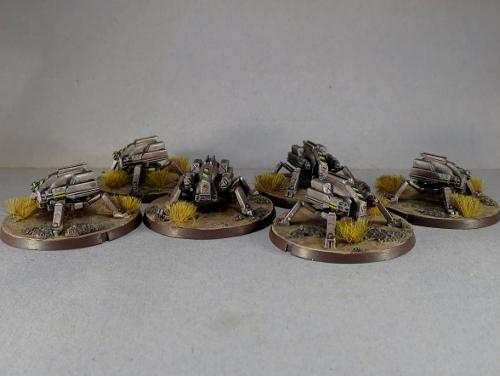 To round out the detachment, I selected another Hunter for my force. 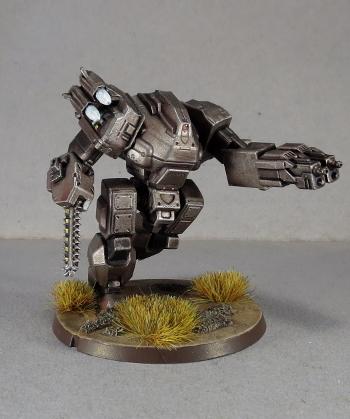 I had built this bot a while back, just to find out how the Hunter would look with a chainsaw in place of the Hydraulic Fist. The saw blade is taken from a Games Workshop Space Wolf kit. Rules-wise, it will still count as the fist. 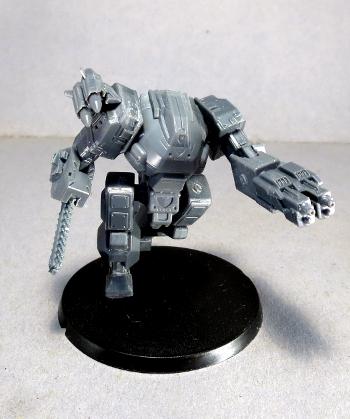 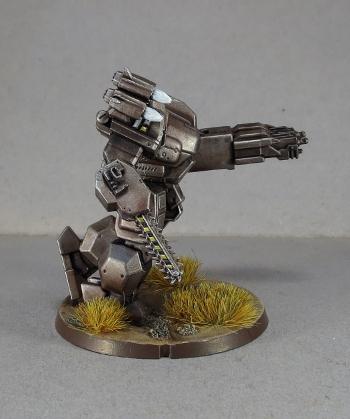 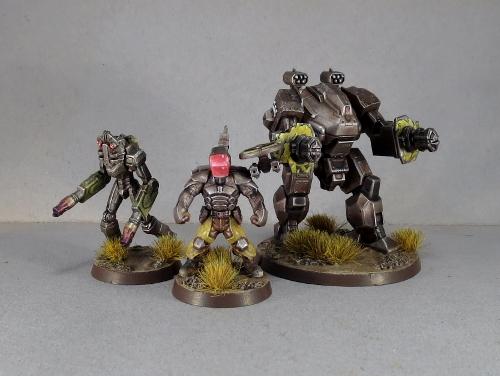 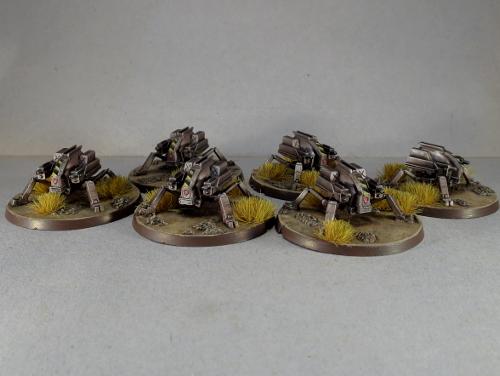 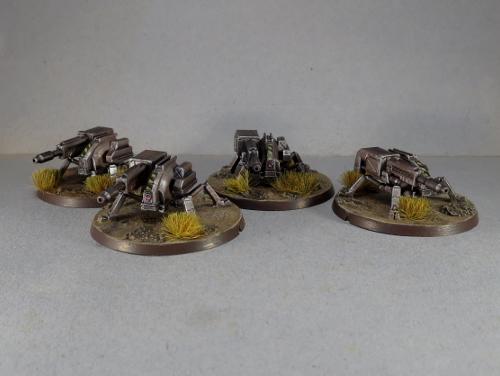 And so, the full force combined: 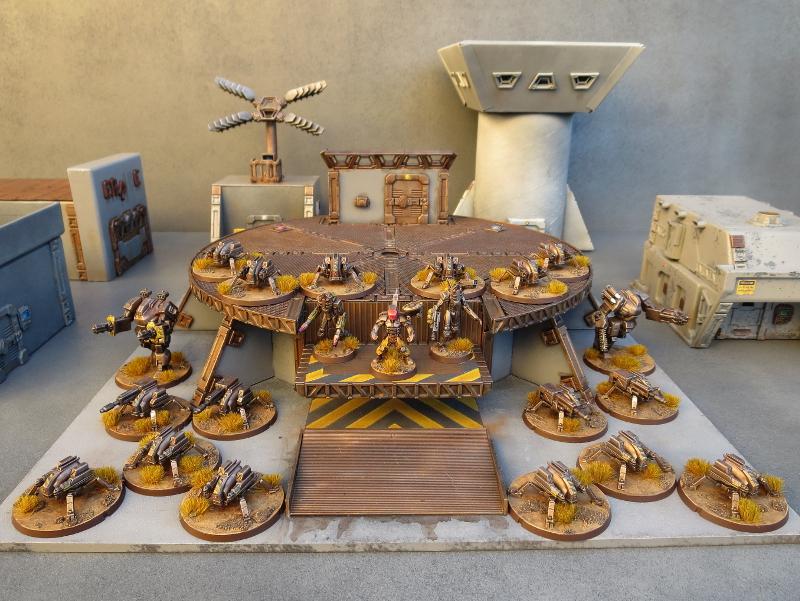 So, what's next for this force?

The obvious choice is to add some Fireflies, and I'll definitely be doing that as soon as I can. I'm also playing with some more homebrew rules, to create a spotter drone that would work in concert with heavy weapon-equipped robot units, possibly by being able to allocate a Command point to a friendly heavy unit within a certain radius that shares LOS to a selected target. 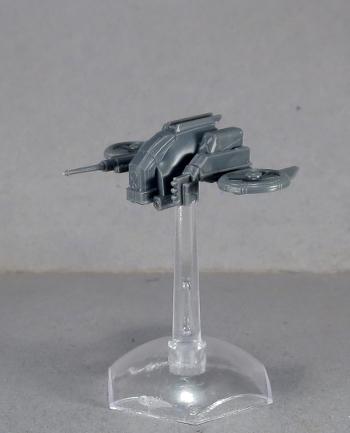 I also built a prototype for a Scarecrow spotlight article a while back, of a Scarecrow that replaces its legs with turbines from the Firefly kit. This was equipped with twin Clingfire sprayers, but I'm thinking that a unit of these equipped with twin Maglock Assault Rifles might be a fun option for encouraging enemy units to keep their heads down. 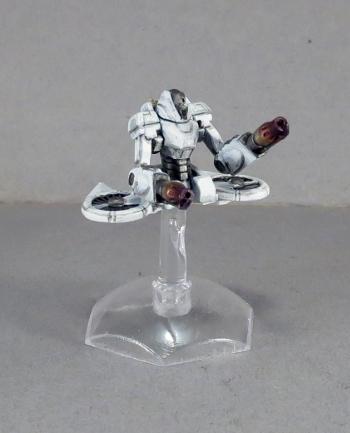 I'm picturing these guys as being able to move freely over obstacles, but being fairly slow moving and not particularly robust, due to the delicate balance required to keep such unwieldy creations airborne.

Stay tuned - I'll post another update on this force when I get these finished off!


If all of these robots are leaving you feeling inspired, you can pick up the full range of Maelstrom's Edge models from the webstore here. As always, feel free to share your creations on the Comm Guild Facebook page!

The Epirian Foundation utilises a wide array of different bots on the battlefield, and the Maelstrom's Edge roster system allows you to create a force that makes the most use of them in place of human troops. And really, why wouldn't you? Robots!

I had a few assorted bots put together in a weathered metal colour scheme for a few previous articles, and so I decided this week that it would be fun to flesh them out into a usable force. 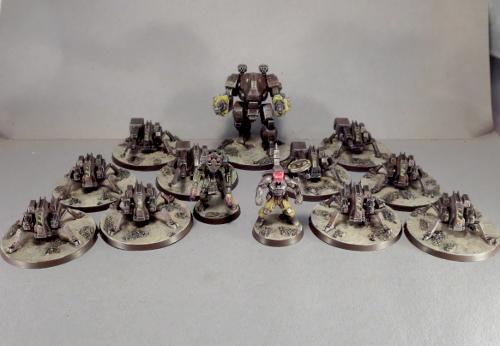 An army, of course, needs a leader. There are a couple of HQ options currently for Epirian forces, but I already had a Journeyman Bot Handler that I put together a while back and then never did anything with, so decided he would have the somewhat dubious honour of being the lone human in the force. 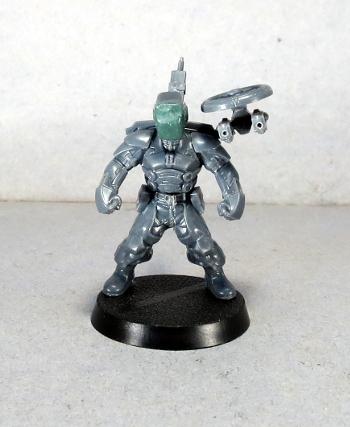 This guy was built from the Bot Handler sprue, with a few modifications. 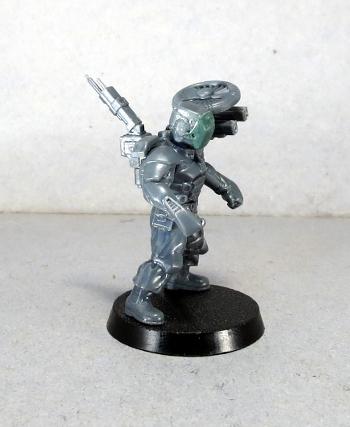 The head was taken from the Contractor sprue with a face shield added with some 'green stuff' putty. 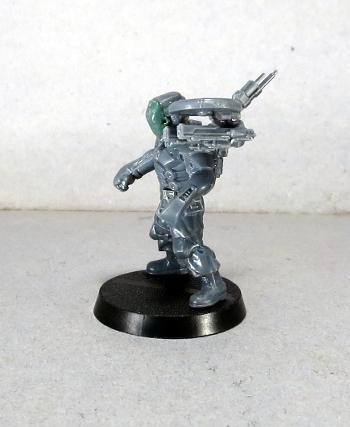 I gave him the spread-leg pose by taking both sets of legs from the handler sprue and cutting them apart vertically through the groin, and gluing the opposing halves with the matching straight legs together. 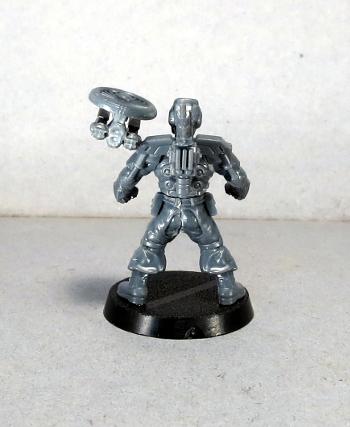 Rather than having him holding his pistols, I thought a mini gun-drone would be fun, so I mounted two pistols under a single turbine taken from a Firefly drone. This little drone is pinned to the Journeyman's shoulder, to give it the appearance of flight without needing a flight stand.

Painting was kept fairly simple, to match the bots that I had already built, and so used the weathered metal process that I've shown in several articles now - red undercoat, followed by a coat of brown, then a metal layer, and then a wash with Army Painter Strong Tone. 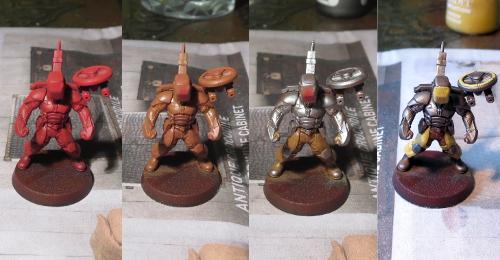 Yellow chaps and a shiny red faceplate tie in with the more subdued highlights used on the rest of the force while letting him stand out a little from the crowd of bots. 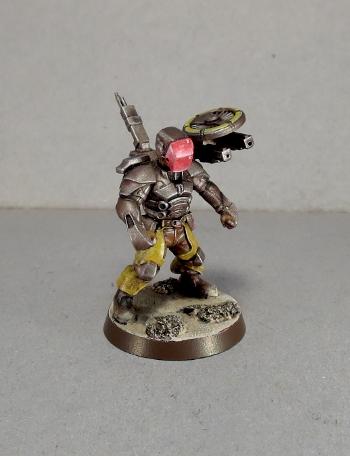 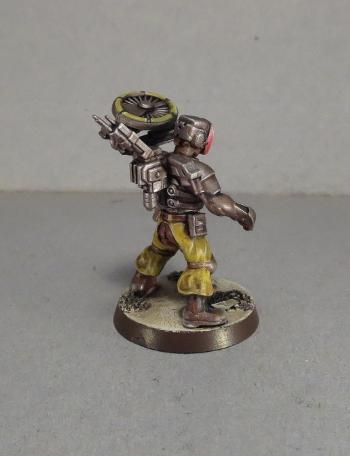 With paint in place, the Journeyman joins the Hunter mech that I originally painted up for the weathered metal tutorial, and a slightly modified Scarecrow that I built for a spotlight article on the lanky, elite units. 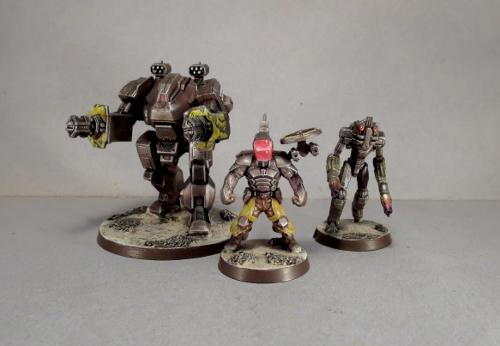 The army wasn't going to get far without troops, and so I grabbed a few Drone sprues and put together two units of Spider drones. To stick with the bot-theme, I made use of the upgrade option to replace the Apprentice handler who normally accompanies units of Spiders with a third drone instead. 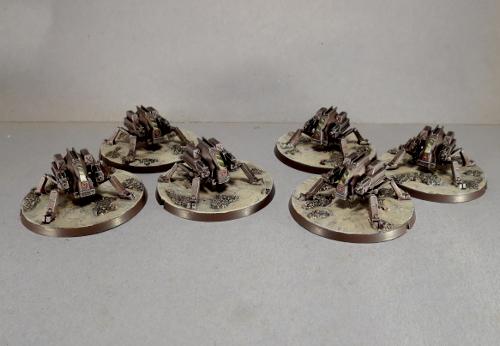 To round out this first detachment, I added some fire support from two units of Scorpion Drones. These are a home-brew unit that I created for an article a while back, rather than a standard Maelstrom's Edge unit - You can find their rules card and a tutorial for building them here. 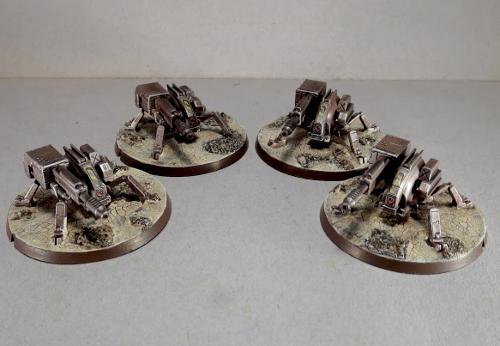 That rounds out the first detachment, which comprises around half of the planned force. Roster-wise, it looks like this: 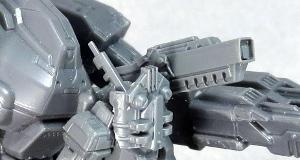 Spoiler: There will be robots!

If you would like to build your own robot army of doom, you can pick up the various Maelstrom's Edge kits from the webstore here. As always, feel free to share your creations on the Comm Guild Facebook page!