Big, burly, slow to anger but nigh on unstoppable when they get rolling, the Gnolti is an impressive sight on the table, and is one of my favourite models. A while back, I got to thinking about the different ways that the ongoing battles around the Maelstrom's Edge would affect these massive, generally peaceful aliens, and started exploring this with my 'Longhorn' conversion. At the other end of the scale from the implacable veteran, I thought it would be an interesting contrast to have a much younger Gnolti who handles the constant call to arms in a much more direct fashion - and so the Gnolti Berserker was born: 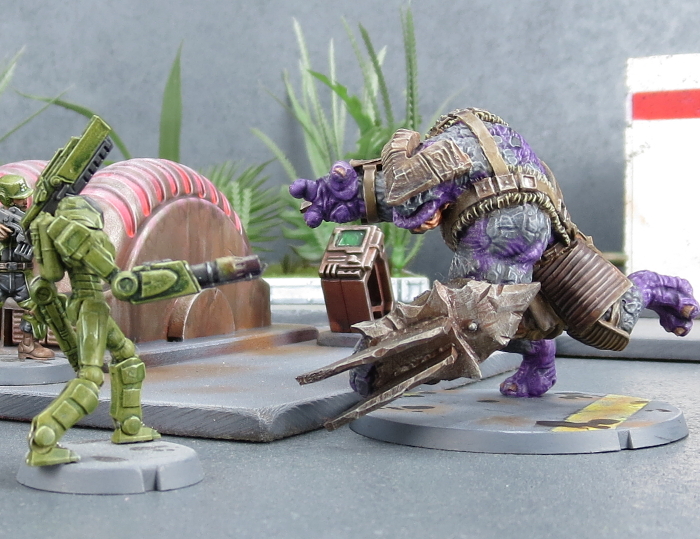 As with my previous Gnolti conversions, this was built from the standard Gnolti model. 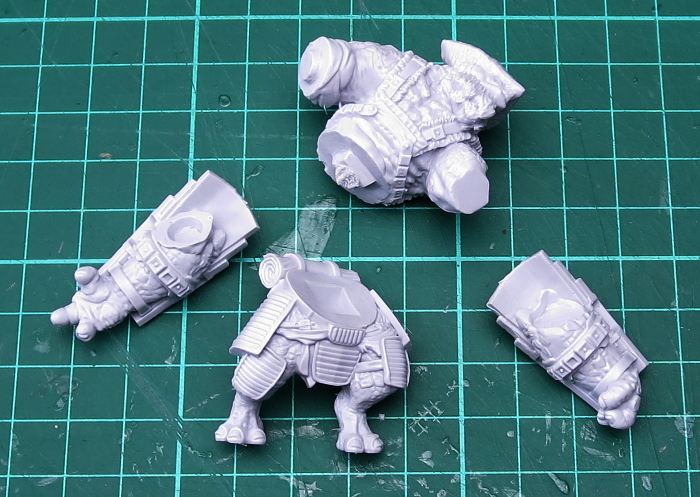 I wanted to give him a charging pose, as this guy was definitely not the 'sit back and take a breather' type of fighter! So I started by cutting the left leg off with a razor saw, and then reattaching it with the leg pivoted to the rear. 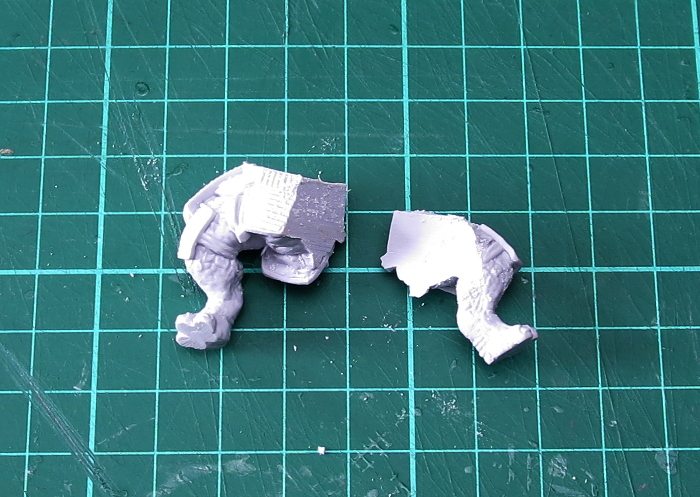 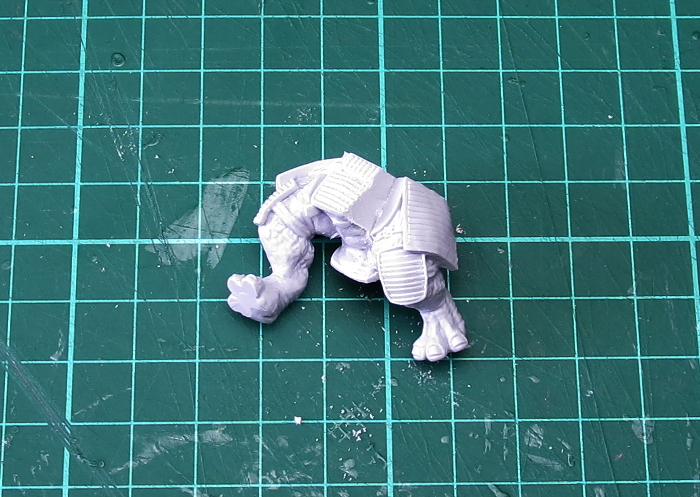 In place of the Gnolti's normal field generating bucklers, I thought it would be fun to give the berserker an array of scavenged blades to fight with. Using a sharp exacto knife, I cut off the existing detail from the shields, added some cracks and dents, and glued on some blades cut from the resin casting tab that the parts came on. (Waste not, want not!) As the left hand's fingers are slightly flattened on the bottom where they normally sit on the base, I also reshaped these by carefully rounding them off with the knife and adding in some knuckle lines. 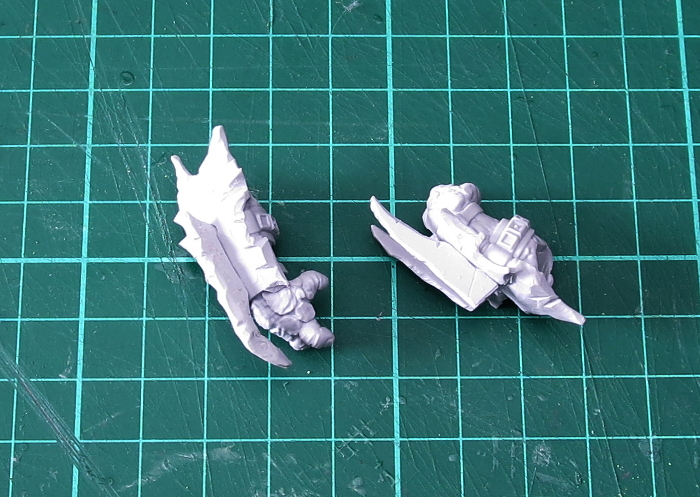 For my Longhorn, I had gone with the idea that the Gnolti's horns would grow as they age. Running that idea backwards, a younger Gnolti would therefore need shorter horns. I figured that reducing his beard would also be fitting, and so I cut away the back couple of sections of the horns, removed all of his beard, and also sliced open the mouth with a razor saw and, holding it under some hot water, carefully bent it open. 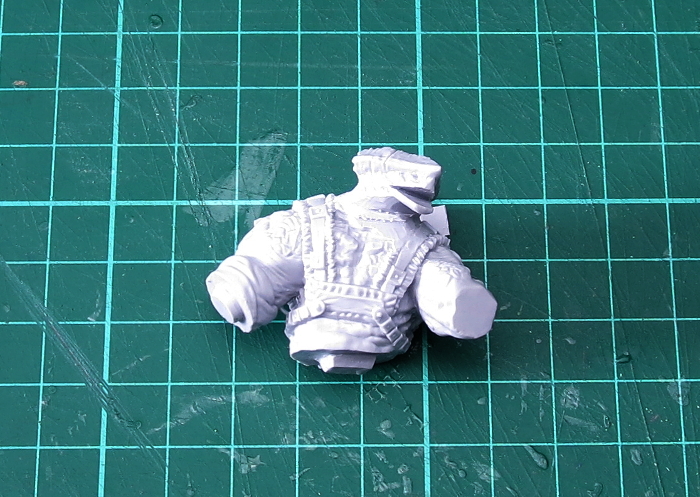 I used 'Green Stuff' putty to replace the missing detail around his neck where the horns and beard were originally, resculpted a smaller beard and added a layer over the lower lip to reshape it. 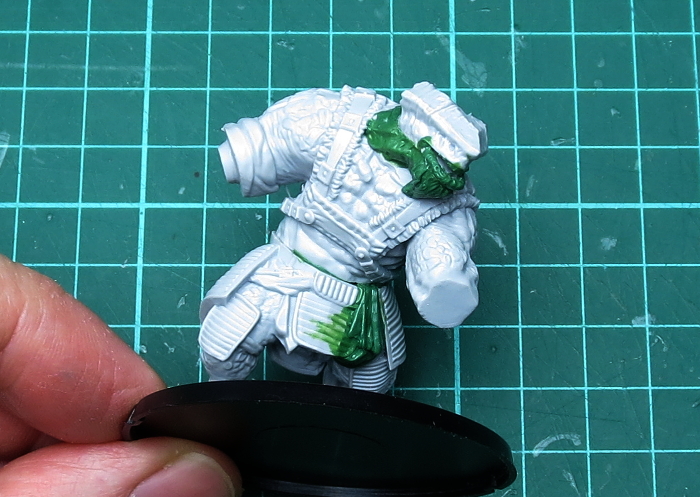 Similarly, I filled in the gap created by re-posing the leg, and also removed the blanket roll from the Gnolti's back just to create a little visual difference from the others, and sculpted in new draped cloth in its place. 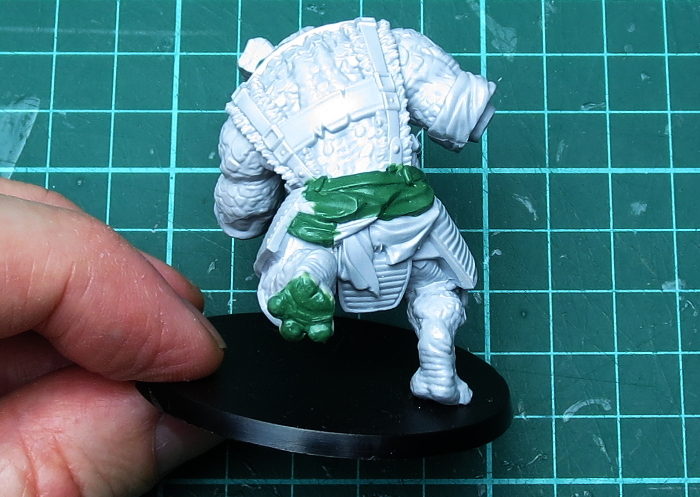 Finally, I glued on the arms and did a little final gap-filling where the reposing of the arms caused them to not fit flush at the elbow joints. 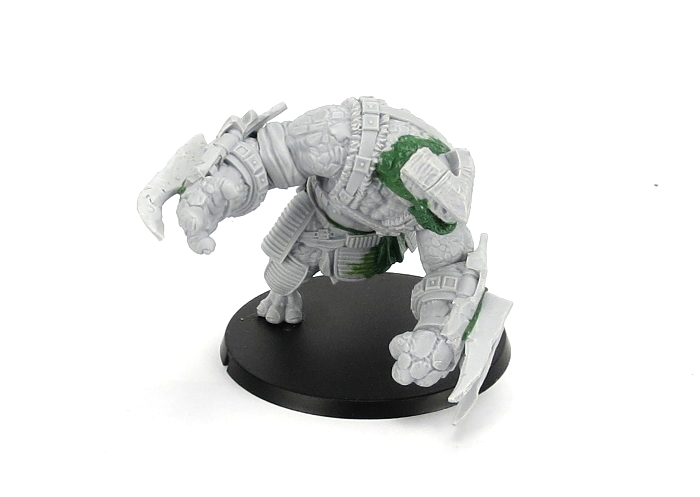 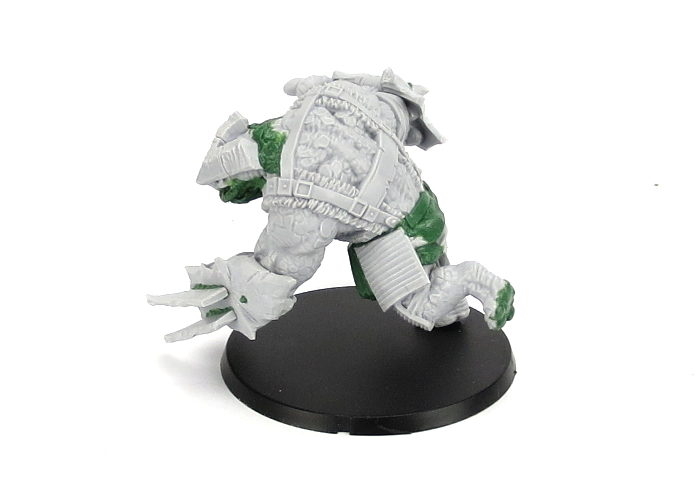 Painting was largely the same as my original Gnolti conversion, although I used a very slightly darker grey on the scales and made his beard a brighter orange. 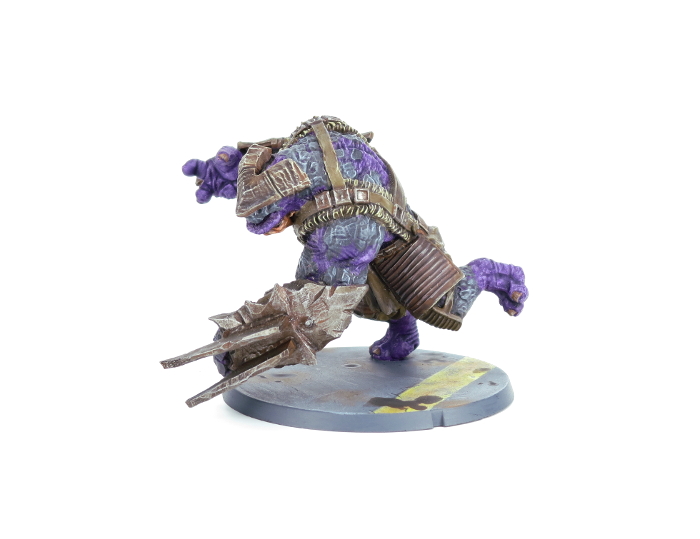 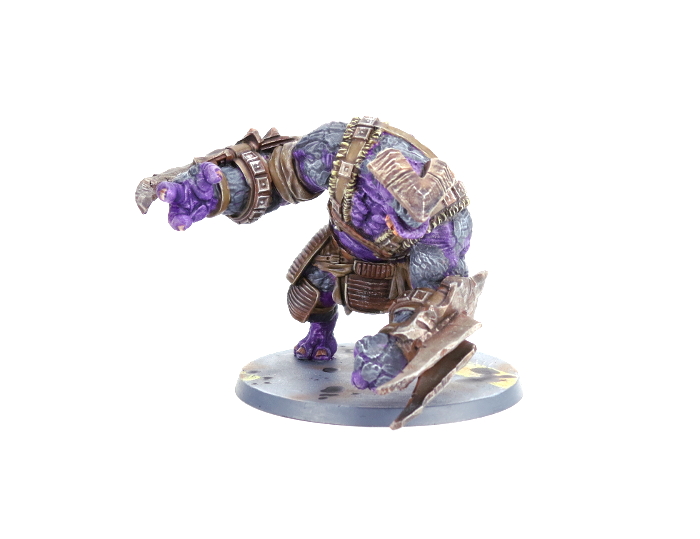 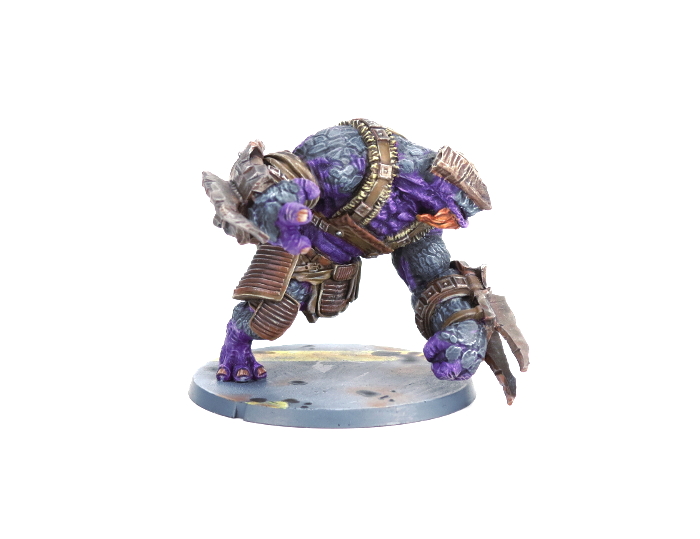 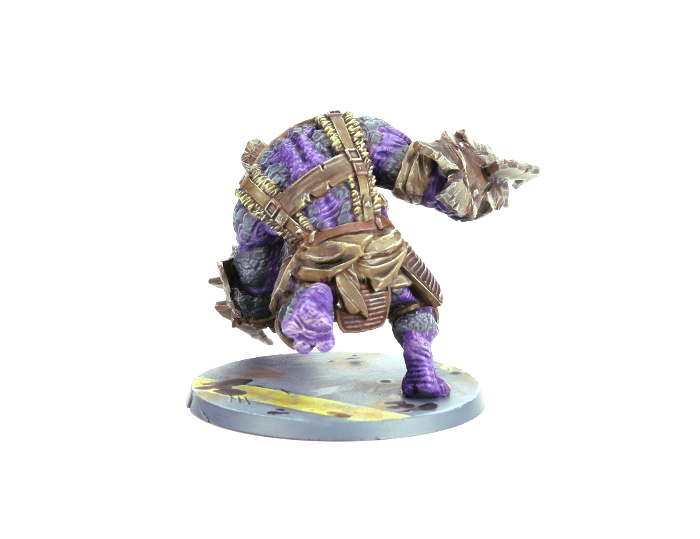 Conversions are only part of the fun, of course - What about getting the models on the table? You can find unofficial rules cards for the Gnolti Longhorn and Gnolti Berserker in the Force List section of the Maelstrom's Edge website here, or download a printable version in the 'Unofficial Cards' PDF compilation here.

If you want to give them a try but aren't as confident in your converting, you can very easily use the standard Gnolti model as a fill-in - for the Berserker, paint him without the light on the shields and maybe make him a bit dirtier, and for the Longhorn just glue on an appropriate gun in the right hand, and you're good to go! 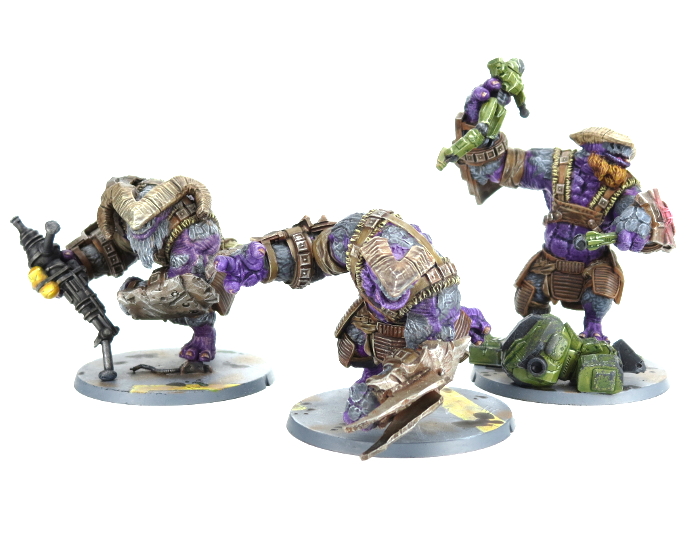 
To put together your own mountain of xenos rage, you can pick up the Gnolti kit along with the rest of the Maelstrom's Edge model range from the webstore here.

You're viewing a weblog entry titled Conversion Spotlight & Rules: Gnolti Berserker!. If you like this entry you might want to: