Slow to anger, but difficult to put down once roused, Gnolti form an implacable, craggy backbone of the Broken forces. As awesome as a regular Gnotli is, I thought it might be interesting to explore the different ways that being forced into warfare might affect different Gnolti. I thought it might be likely that younger, more headstrong Gnolti would be more ready to turn to anger, while older, experienced veterans would be more prone to careful consideration and strategy. With the seeds planted, I grabbed some putty and a few extra bits and pieces, and the Gnolti Longhorn was born! 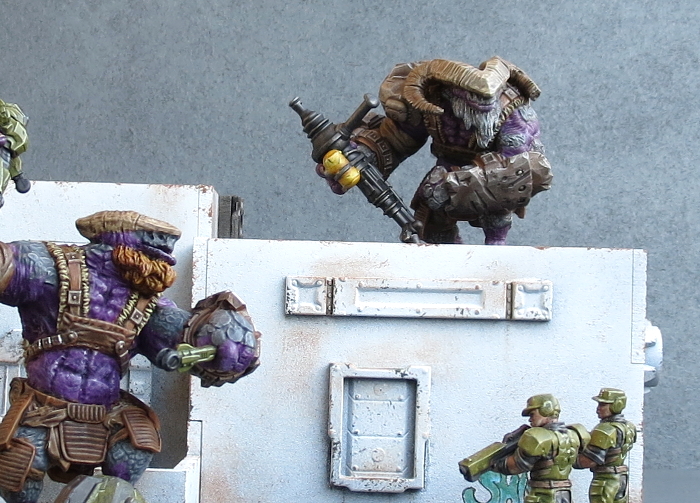 Obviously, the core of this model is the fantastic, resin Gnolti model. 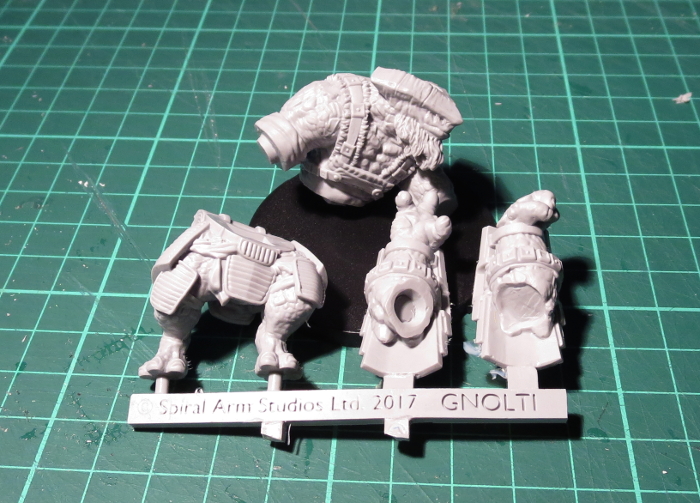 To make him stand out a little, I wanted some suitably scavenged-looking armour, although this would be more for decoration than anything, given the Gnolti's craggy hide. So I grabbed the front half of an Epirian Hunter Mech torso and removed the lower section. 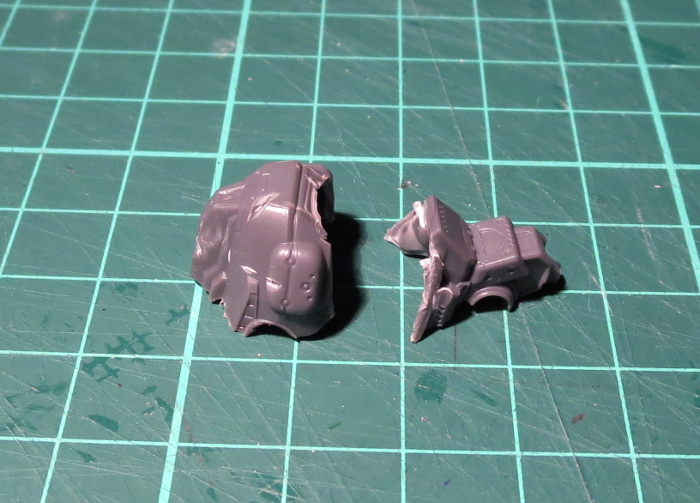 With some battle damage and careful trimming added with a hobby knife, the torso front fit nicely on over the right shoulder.

To create the eponymous 'longhorns', I drilled into the ends of the horns, and glued in some curled lengths of steel wire. 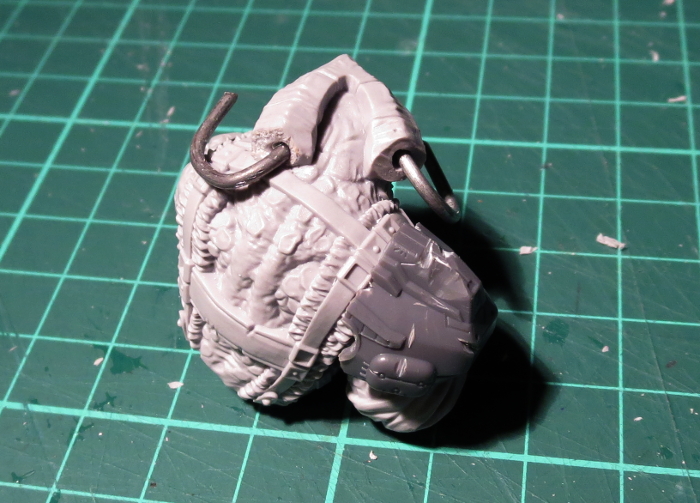 I reshaped the locator pin on the bottom of the torso a little so that I could twist the torso slightly to the side. Then I heated the right leg in hot water and bent back slightly, allowing the legs to be posed on a low piece of rubble. 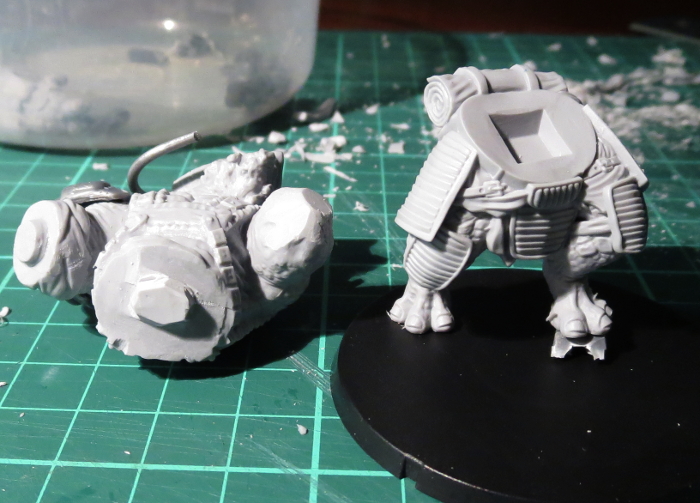 The Longhorn was going to lack the shield generators worn by regular Gnolti, but removing the forearm shields completely would have required considerable resculpting of the arms, so instead I removed all of the tech details and added a bunch of battle damage, turning them into ordinary, garden variety bracers. 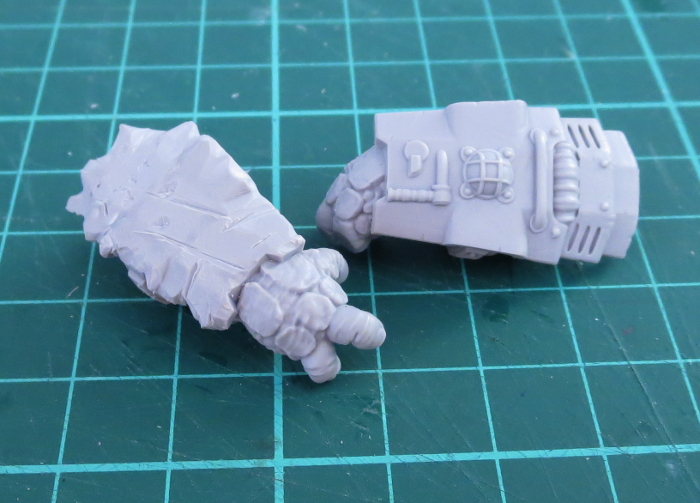 To allow the left arm to be angled closer in to the torso to rest it on the left knee, I hollowed out the elbow joint with a hobby knife, and slightly reshaped the elbow end of the upper arm. 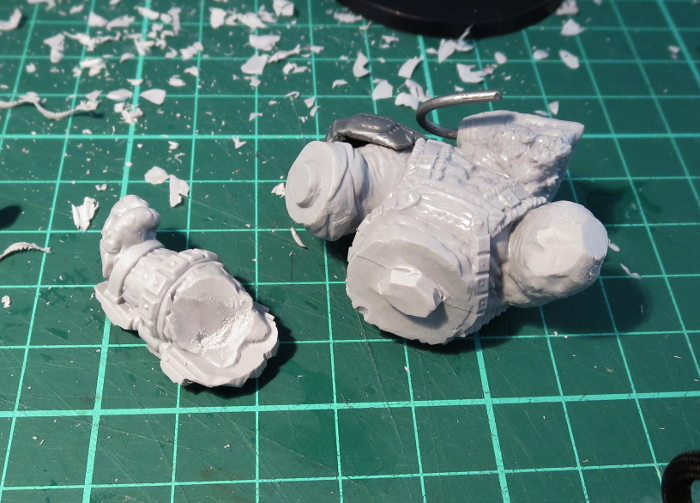 At this point, it was time to break out the putty. The horns received an initial bulking-out layer. 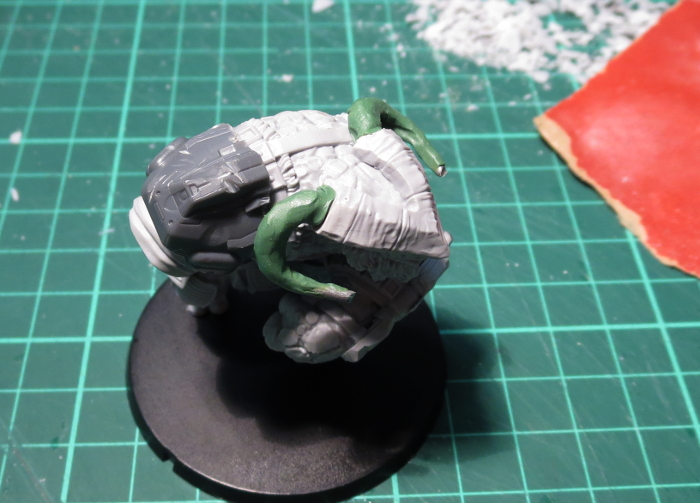 Once this was set, I added additional putty and smoothed it into the horn shape, and then added striations to match the existing horn sections using a silicon clay shaper. 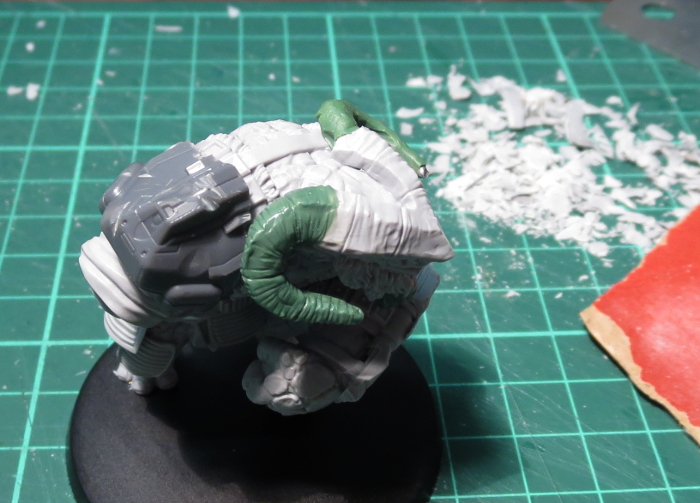 Rather than worrying too much about getting the horns identical lengths, I made one shorter and squared off the end, to make it look like it had been broken off. 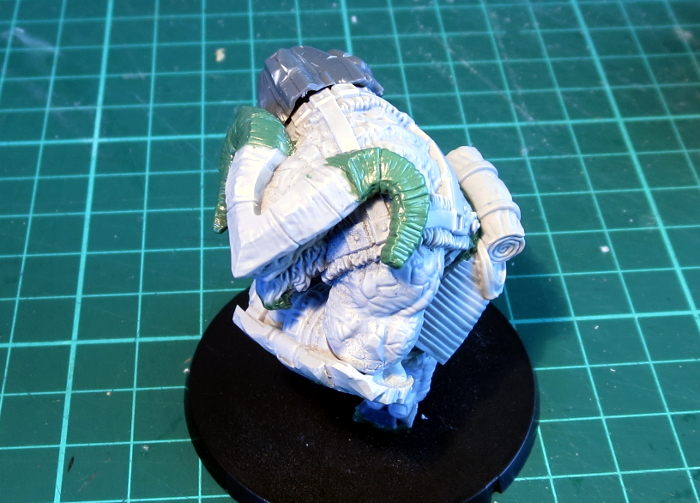 The right hand needed repositioning to hold the gun properly, so I sliced through the wrist with a razor saw, and reattached it at a better angle. The gun itself was borrowed from a Mantic Veer-min Nightmare, with some grips added from plastic tube. I'm picturing this as a Chem Cannon, but haven't fully settled on rules yet. 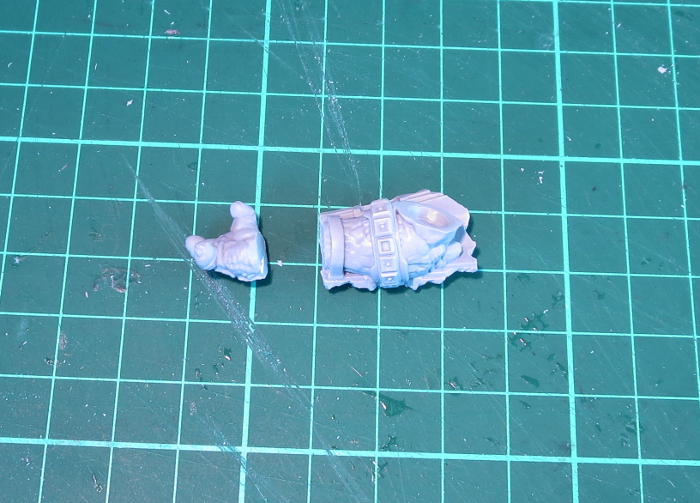 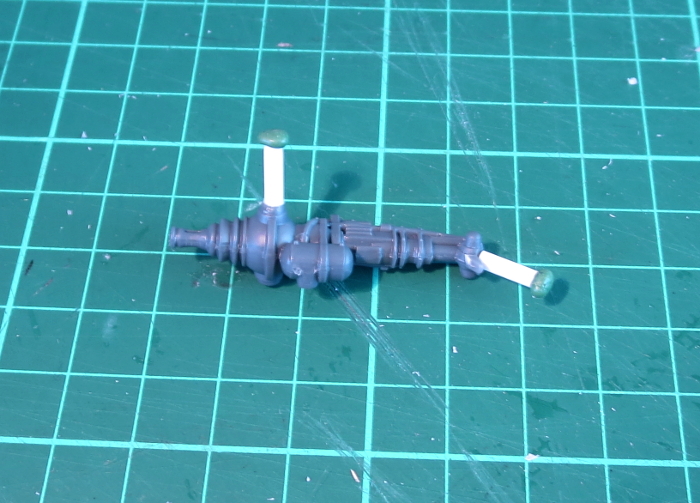 After final assembly and some minor gap-filling here and there, the Longhorn looked something like this: 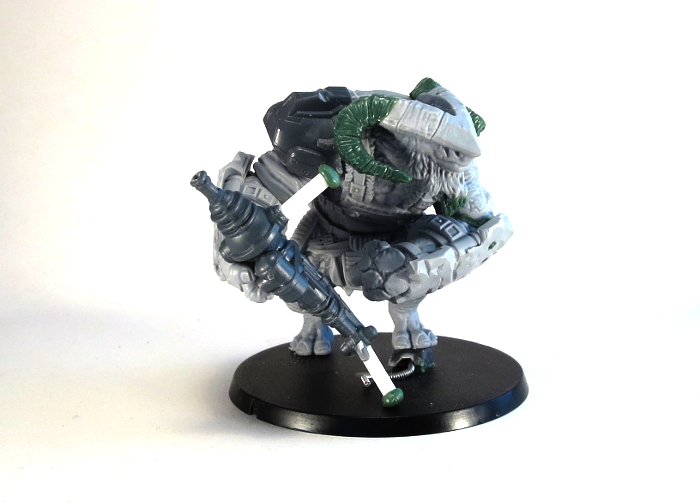 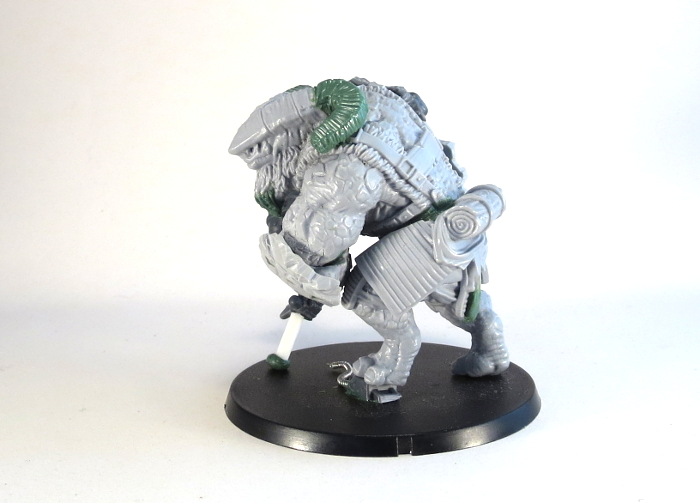 Painting was very similar to my previous Gnolti conversion, although I went for a slightly more stark highlight on the scales and a white/grey beard to help convey his veteran status. 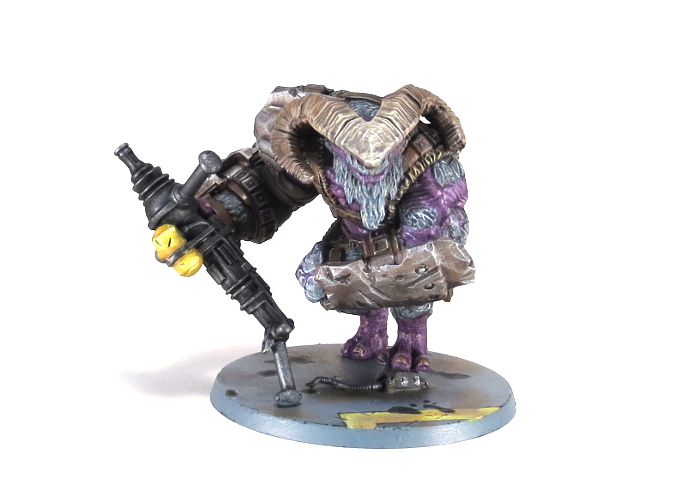 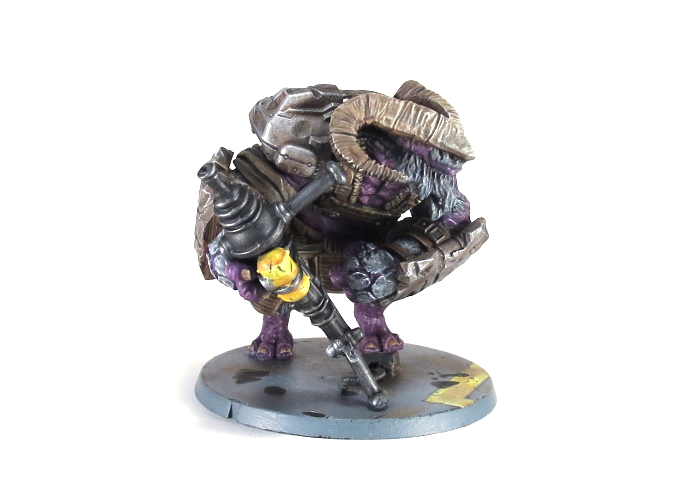 The harness, cloth and leather armour plates were painted with various shades of brown and washed with Army Painter Strong Tone, and the metal armour was painted with Vallejo Beasty Brown, drybrushed with P3 Pig Iron, washed with Strong Tone and then given a drybrush of Army Painter silver. The darker tone on the weapon was from a black basecoat, a heavy drybrush of Pig Iron and then two coats of Dark Tone. 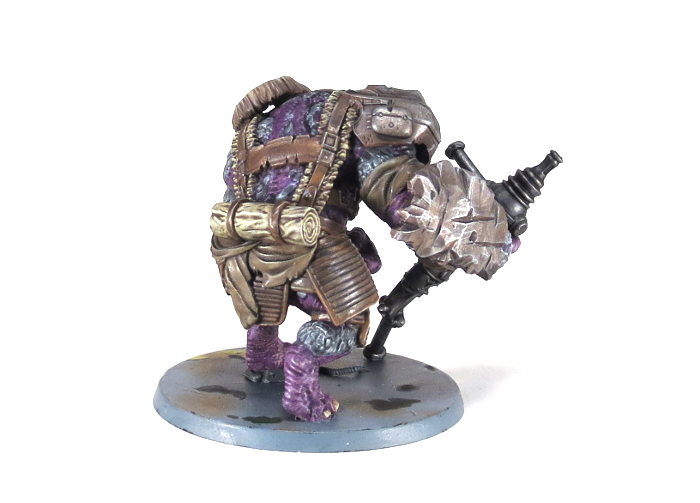 With basing in my standard Urban theme, Grampa Gnolti was ready for the table. 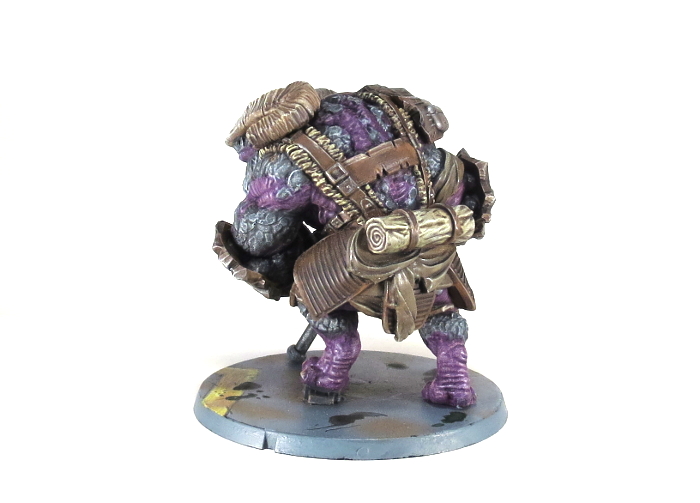 The other end of the spectrum is, of course, the young, impetuous (relatively speaking) Gnolti. Stay tuned!

What have you done with your Gnolti? We would love to see your creations on the Comm Guild Facebook page!

To pick up the Gnolti kit, or any of the rest of the Maelstrom's Edge model range, visit the webstore here.

You're viewing a weblog entry titled Modeling Spotlight: Converted Gnolti Longhorn. If you like this entry you might want to: