Back in the barn!

I recently shared the first part of this build, combining a Plast Craft Games warehouse with parts from the Maelstrom's Edge terrain sprues to build the shell of a sci fi barn (part one is here). This week, I broke out some more terrain sprues and set to work on the interior! 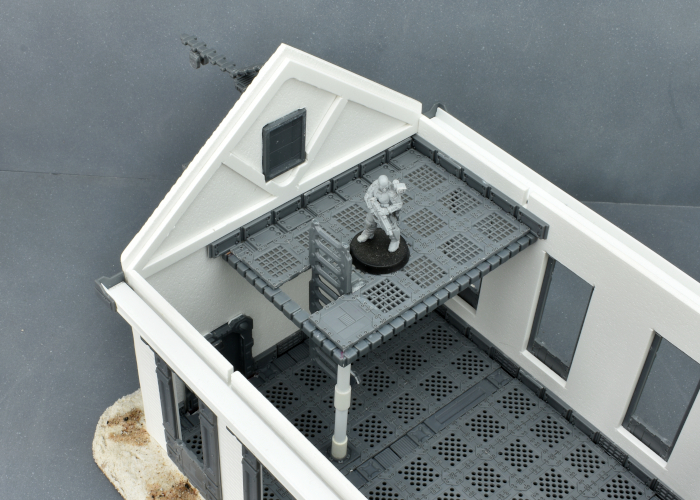 When I built the outside, I left the floor unglued, to get easier access for fitting parts. So I started by taking the floor piece back out and spraying it matte black, so that it wouldn't show underneath the grating pieces I was planning to use for a new floor layer on top. After measuring out the width of the floor against the floor grate pieces from the terrain sprue, I found there was going to be a slight gap around the edges, so I added some skirting using the reinforcing struts from terrain sprue #2. 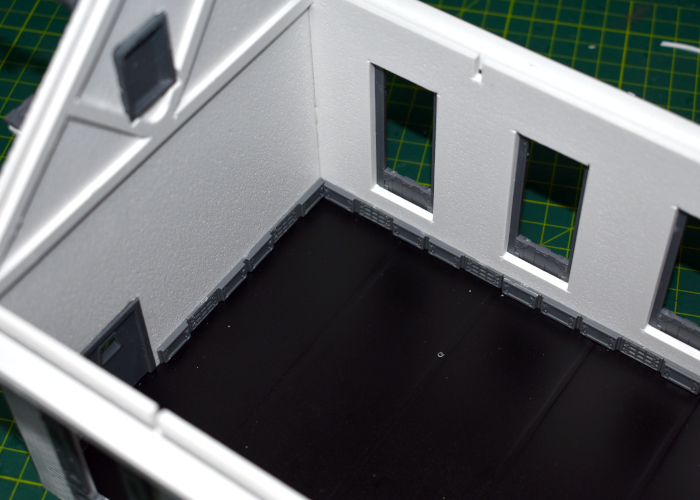 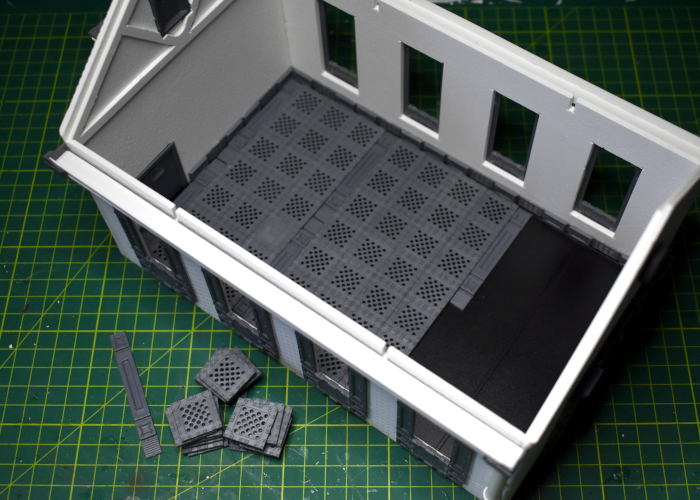 I wanted a small balcony on the end with the smaller door, which would provide access to the platform and crane on the outside of the wall. I used another of the floor grate pieces with some more reinforcing struts and lintel pieces top build the balcony, and some plastic tube with two of the small pipe fittings from terrain sprue #1 to hold it up on the protruding corner. Finally, a ladder from terrain sprue #1 provides access up to the balcony. 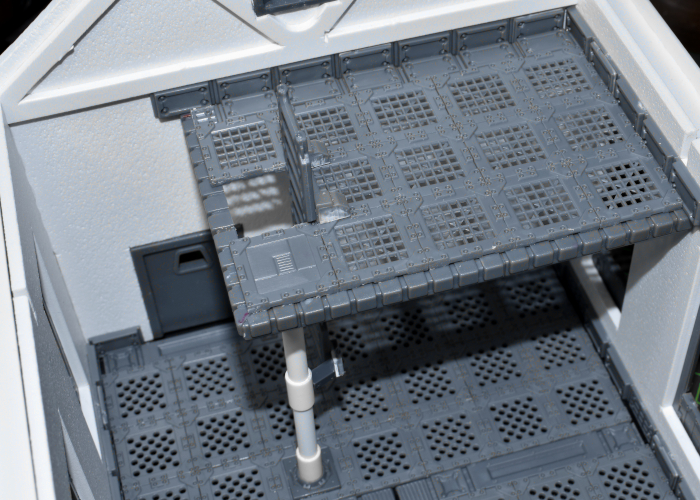 To add some detail to the inside of the doors, I grabbed some extra doors and cut the frames off the outside using a razor saw and scalpel. 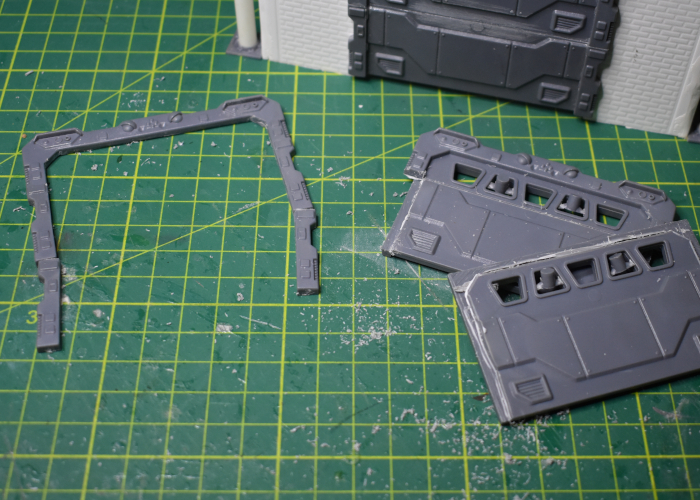 The rectangular inside frame of the existing doors protrudes through the wall about a millimetre, so I cut some 1mm plasticard to form a spacer behind the new interior frames, trimming it up to match the contours of the outside of the frames and then gluing it all into place. I also added the outside ring from a porthole from terrain sprue #2 to finish off the hole for the exhaust fan on the outside wall. 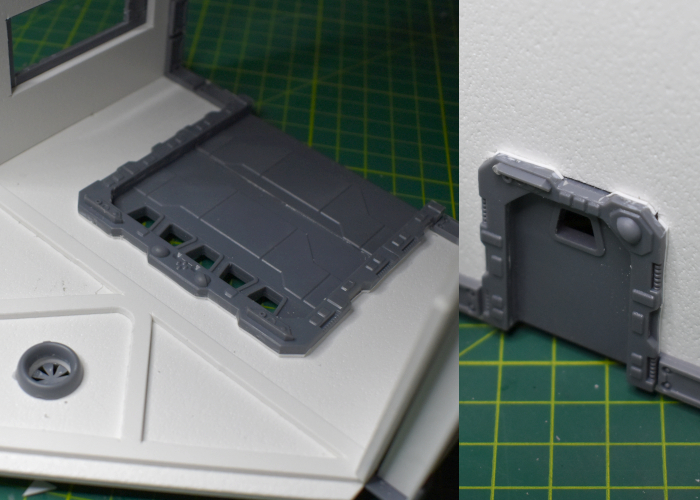 I considered adding some interior detail around the windows, but this would complicate painting as I needed to get the clear plastic panes in at the end. I also thought about building some animal enclosures, but decided to keep the floor space open so that, in the event the building is being used with the interior accessible, I can just drop in a vehicle or some crates and other obstacles to suit the situation.

So that just left putting the barn onto a base. I cut a piece of 5mm hardboard to size, sanding down the edges to bevel them off and then glued the floor piece of the barn into the middle of it. When I went to glue the rest of the barn over the top, it immediately became apparent that I hadn't accounted for the raised floor tiles when I added the interior door frames, so I had to cut out some inserts for them to slot into. 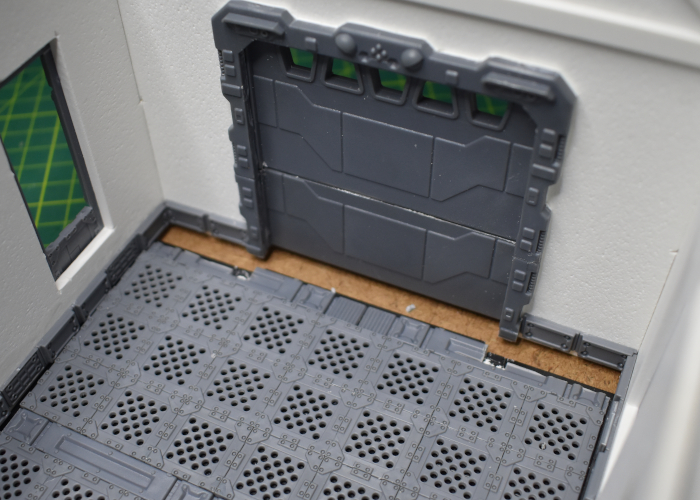 Finally, I mixed up a batch of filling plaster with some PVA glue and fine sand for texture, and slathered it around the outside of the building to cover up the hardboard. This mixture didn't immediately stick particularly well to the hardboard, although it would once the glue dries, so this process involved poking it into place with fingers and an old paintbrush, and a certain amount of cursing. In the end, though, I got the plaster laid down all around the exterior, with a smoother ramp of pure filling plaster leading up to the larger door. Then I finished up by adding some small patches of sand and gravel mix here and there, glued into place with some more PVA glue. 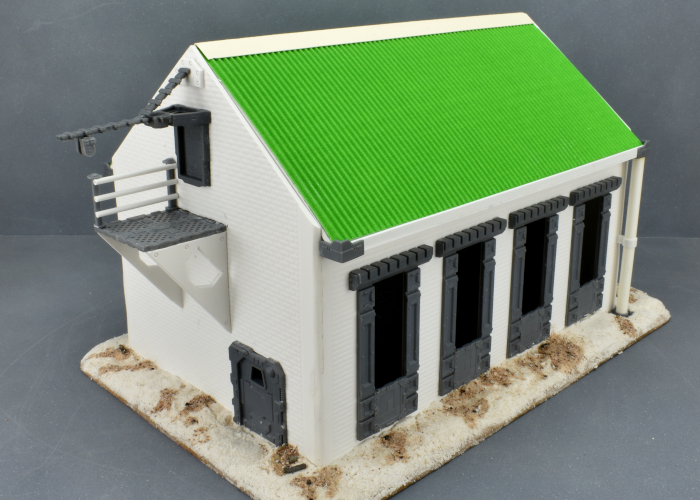 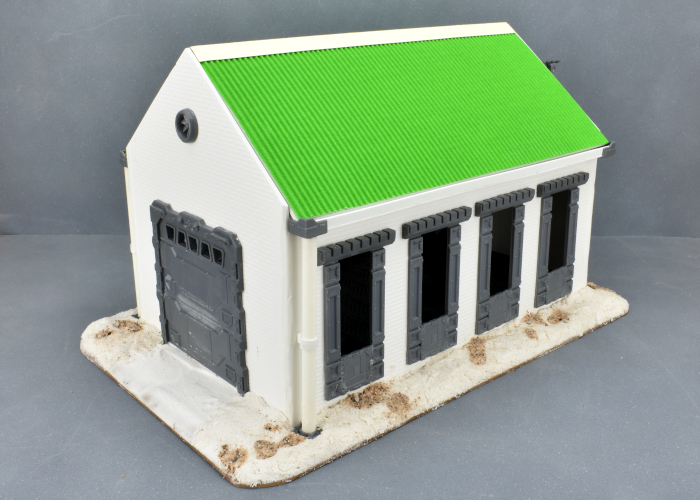 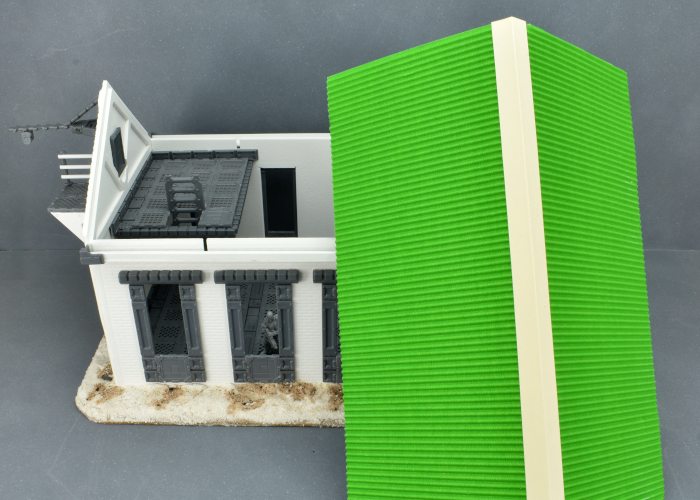 You're viewing a weblog entry titled Terrain Kitbash: Sci-Fi Barn pt2. If you like this entry you might want to: