Terrain Spotlight: Building made from foamed PVC and the Maelstrom's Edge Terrain Sprue

I've showcased a couple of customised Plast Craft Games buildings in the past - a scifi-d up pagoda, and a similarly modified western building. These kits are made out of a foamed PVC board which was really fantastic to work with, so I decided to track down some similar board to have a crack at putting together some of my own designs with it, with the below result: 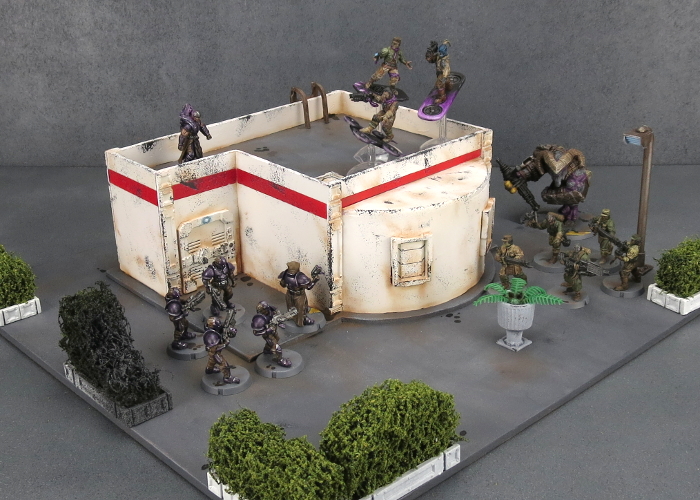 Slightly unusually for my projects, I started this one by sketching out a plan to see how everything would fit together. This was partly due to my desire to take advantage of the flexibility of the PVC by adding a curved front wall to the building, so I wanted to make sure that I had my dimensions correct before I started cutting. 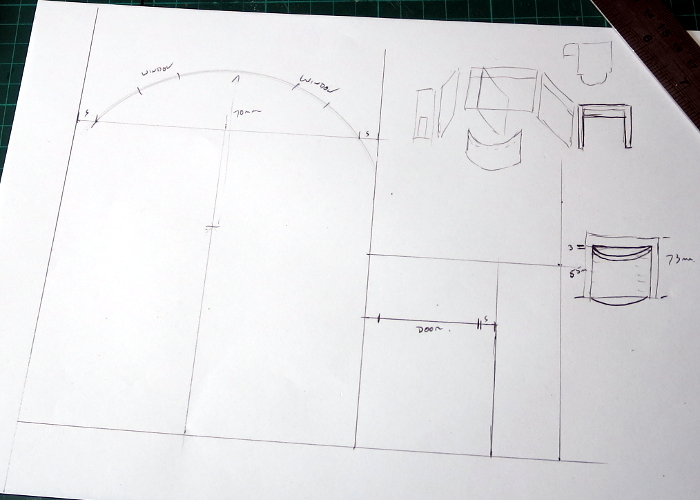 Once I was confident that I had it all worked out, I pencilled up the various panels that made up the building onto the sheet of PVC, and then used a steel ruler and hobby knife to cut it all out. The foamed PVC cuts really easily with a knife, and also sands well. It feels almost like something halfway between cardboard and foamcore*, without the inherent frailties, like the risk of damage from moisture or spraypaint.

*For the uninitiated, Foamcore, also sometimes called Foam Board, is a material made up of a thin sheet of expanded polystyrene sandwiched between layers of paper or thin card, and is a common building material for wargaming terrain and scale building construction. 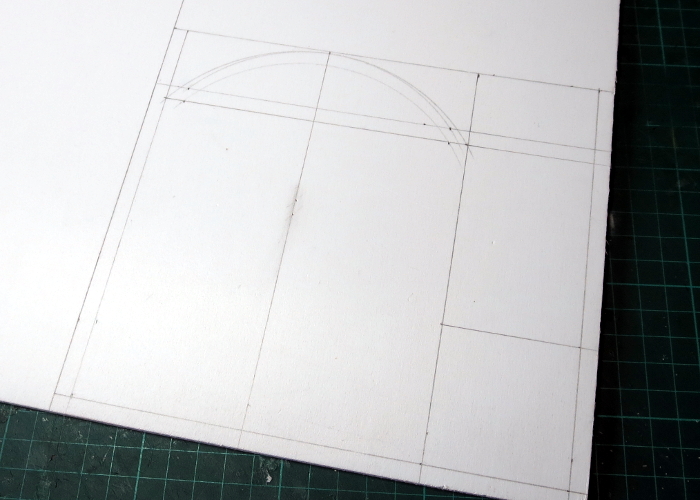 Once everything was cut out, I did a quick dry-fit to check that everything slotted in where it should. 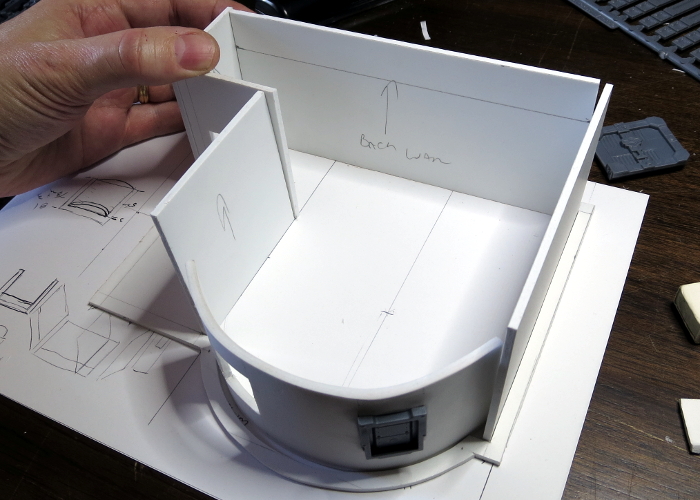 The curved panel on the front was made by cutting the piece to the right size and then laying it over an old baby formula tin while heating it with a hair dryer. This achieved the desired curve, but I suspect the hair dryer was a little too hot for the material as it caused it to swell on some of the cut edges. Next time around, I'll try just immersing it in hot water for a minute instead. 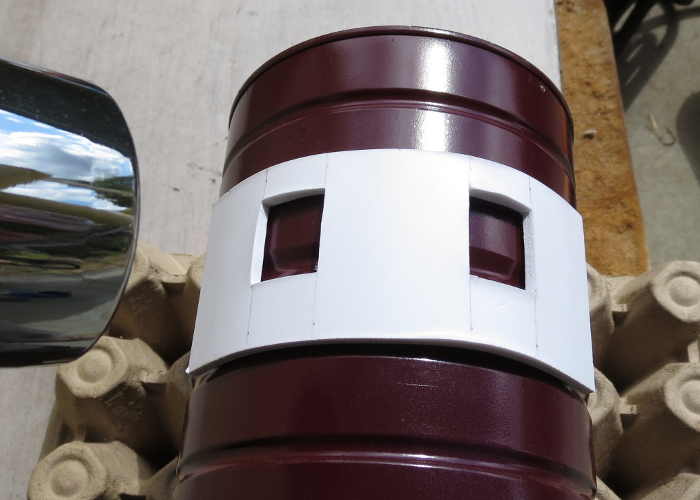 The door and windows are taken from the Maelstrom's Edge terrain sprue. I cut the holes in the wall panels for those by sitting them in place, drawing around them with a pencil, and then cutting the resultant rectangles out with a hobby knife. 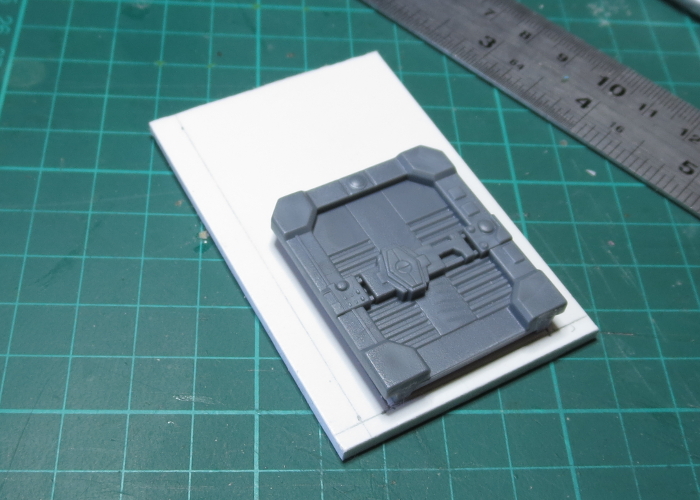 I wanted a walled roof area for troops to take cover on, so marked down 20mm inside each wall and glued in some strips of leftover PVC to act as support. 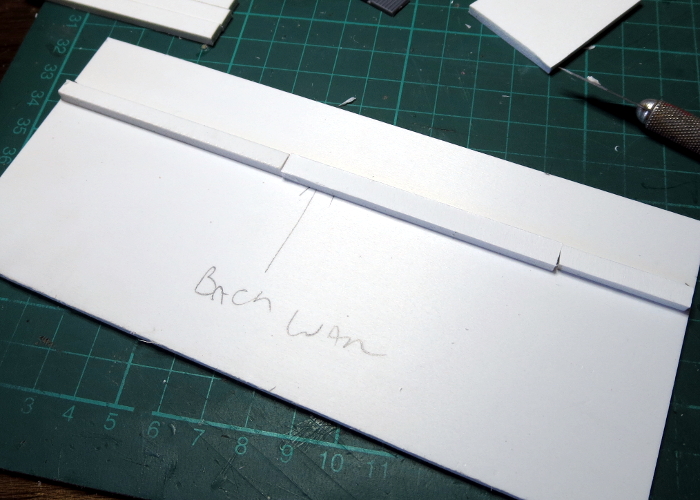 The walls, door and windows were all glued into place, and the roof dropped into place with a little more glue. I used superglue for assembly - this grabs really well, and quite quickly, on the foamed PVC. 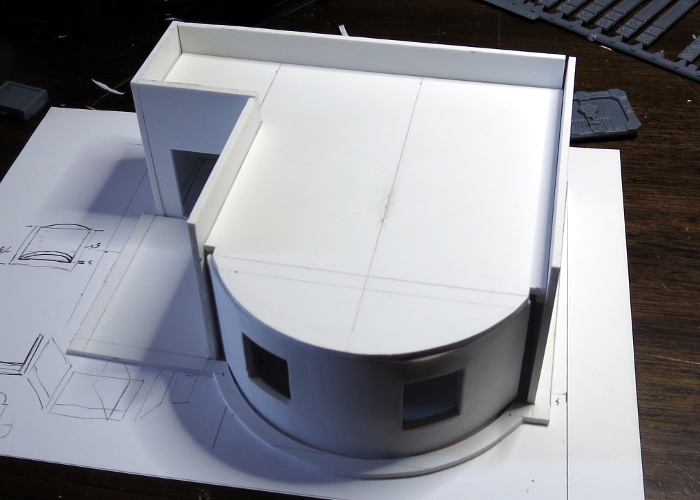 As the last step before painting, I took support struts from the terrain sprue and glued them over the exposed joints on the walls. 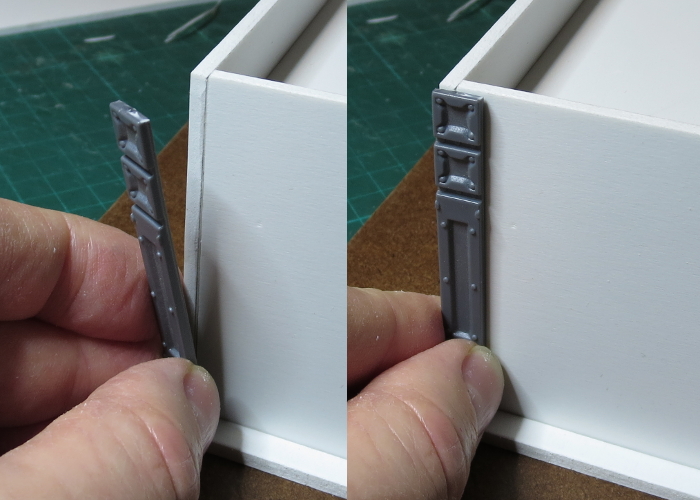 That left me with the building itself assembled, and a few details to add on once the walls were painted. For some added sturdiness, I glued the building down to a square of 5mm masonite. 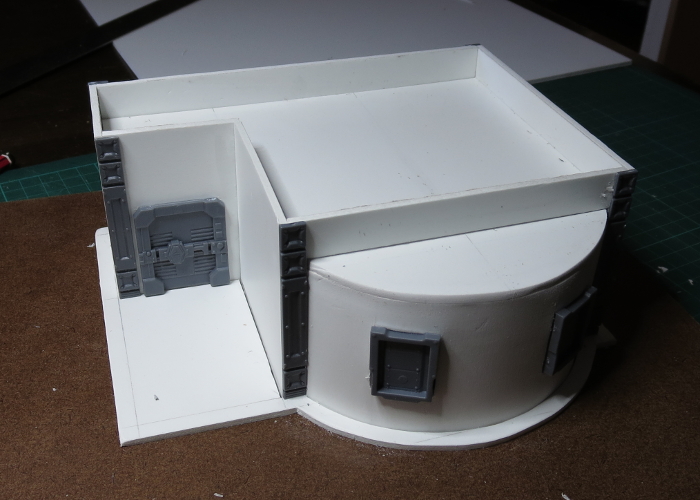 To kick off the painting, I sprayed with red right around the top of the walls. 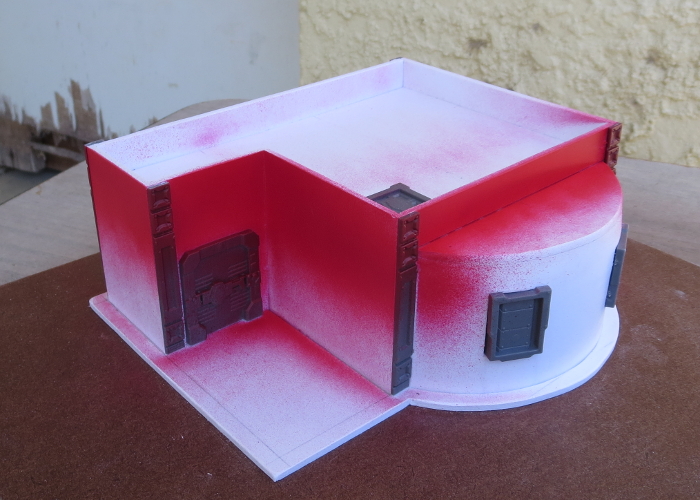 I then applied a line of masking tape over the red paint, just below the tops of the walls. I lined this up with one of the panels on the support struts, to make it look neater. 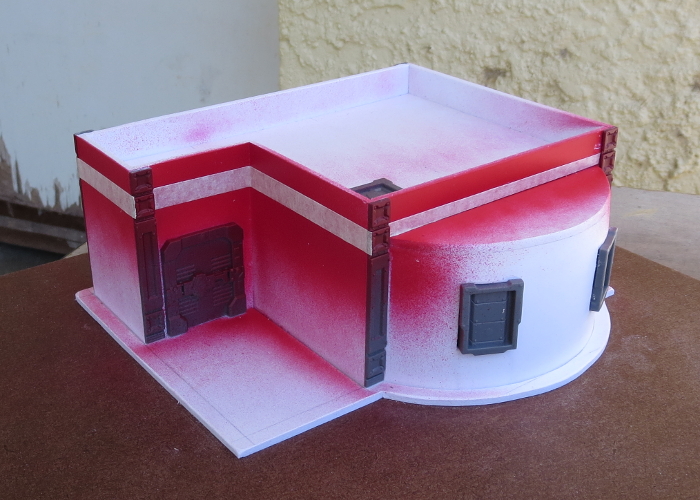 The whole building received a coat of a nice, sandy brown colour. 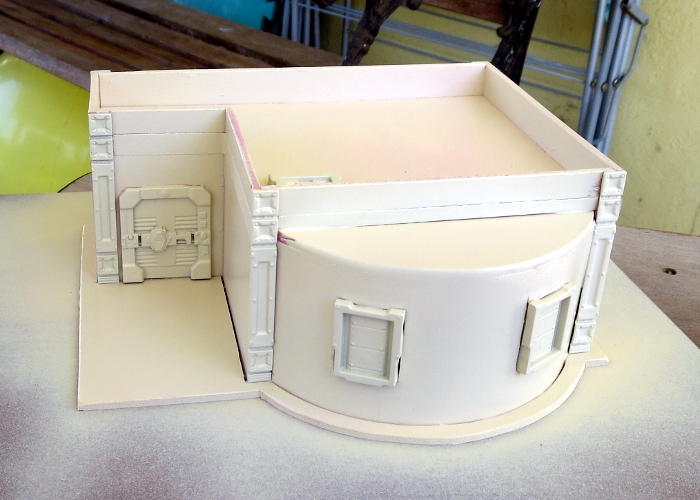 This was followed up with a spray of white from above, leaving the sandy brown in the crevasses and undersides of the detail. 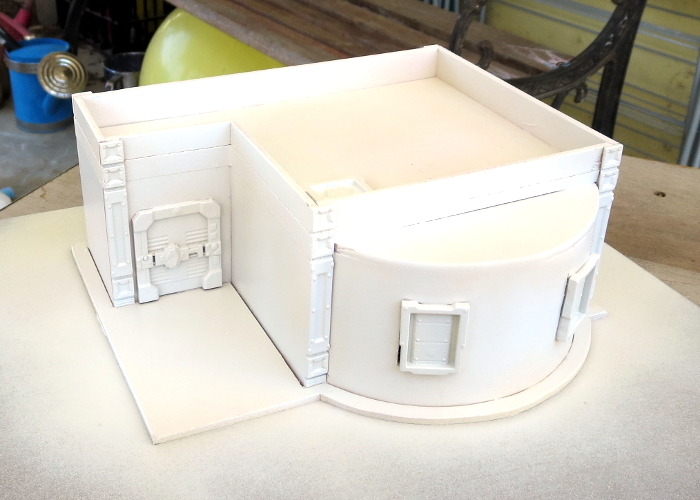 
Once the spray was dry, I peeled off the masking tape, and painted the base and the roof with Vallejo Basalt Grey. 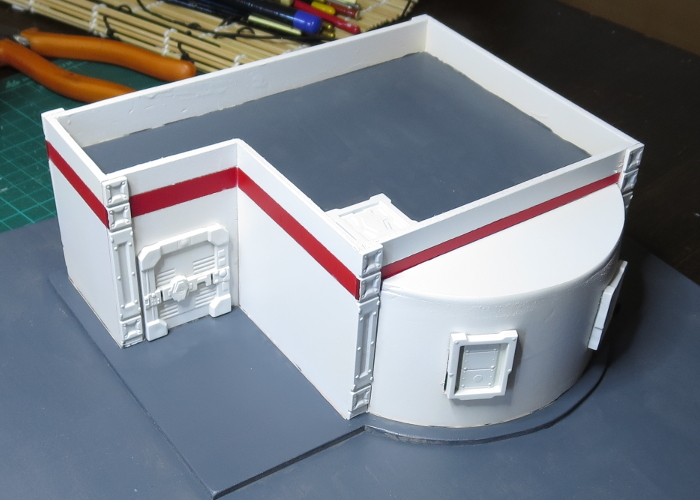 Everything was weathered with a sponge and some Vallejo Heavy Charcoal (for a how-to on sponge weathering, check out the article here!), and the base and roof were drybrushed with Vallejo Light Grey and a little white. 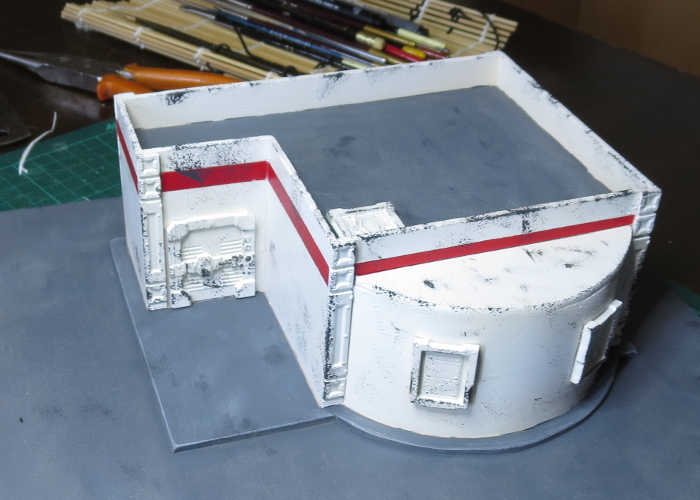 I dirtied everything up with a generous drybrush here and there with Vallejo Beasty Brown. 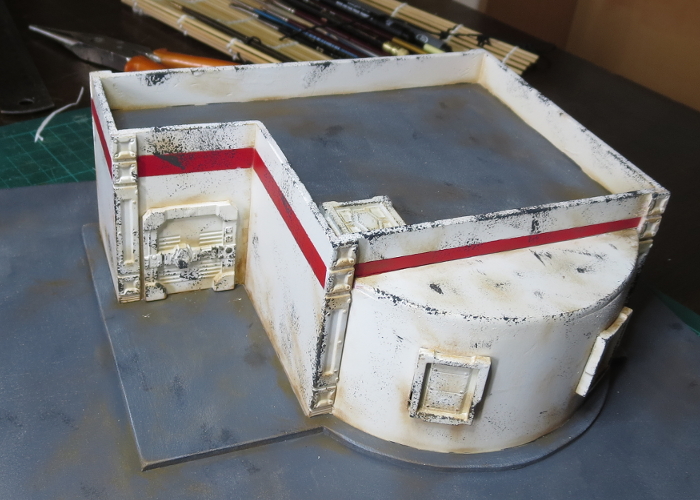 The lower edges of the weathering on the red strips was highlighted with a little Citadel Tentacle Pink and Army Painter Pure Red, and I blacklined some of the deeper detail lines on the terrain sprue components. The 'puddle' stains were added with Army Painter Strong Tone and Dark Tone, by dripping small drops onto the board and leaving it to dry. 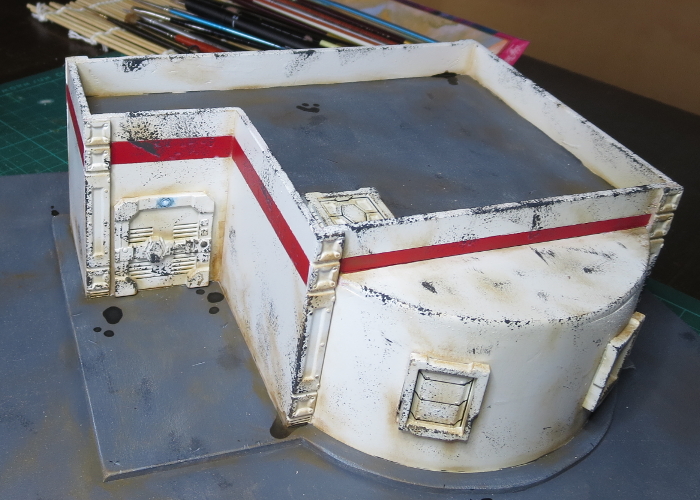 For the finishing steps, I added a fan on one wall using the large pipe fitting from the terrain sprue some plasticard, built a small pipe coming out of the back wall using some more terrain sprue pipe fittings, a couple of short pieces of plastic tube and a piece of sprue cut from the terrain sprue, and hung a ladder on the back wall. To add handrails to the top of the ladder, I trimmed away the top rung, and cut a couple of pieces of sprue that looked about right, added a ninety-degree bend with by bending carefully with pliers, and then gluing it all in place. The ladder was painted using my normal weathered metal technique. 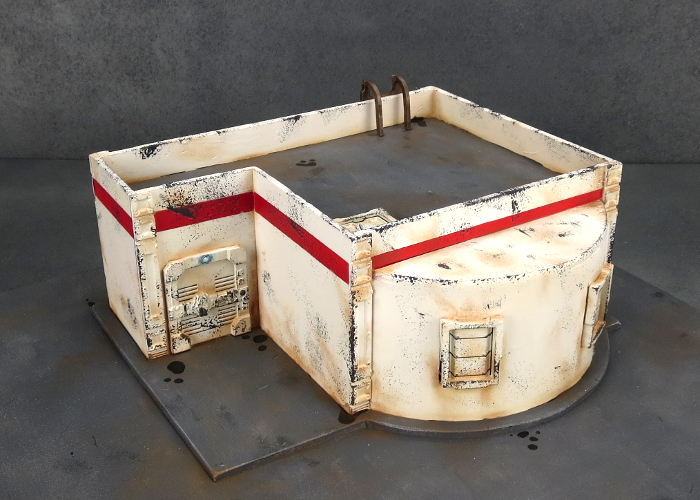 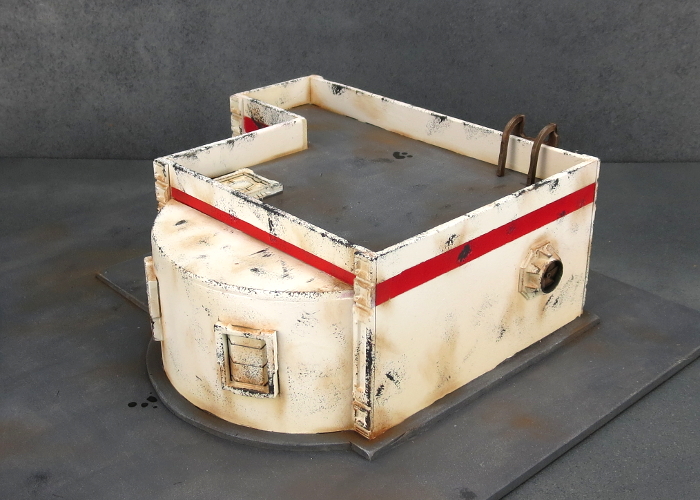 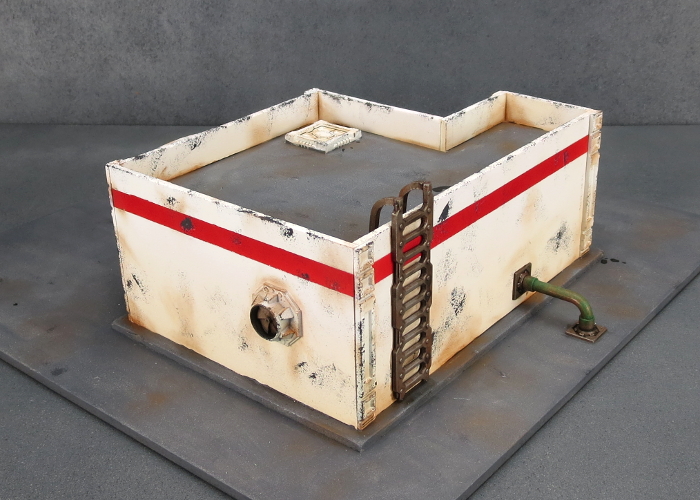 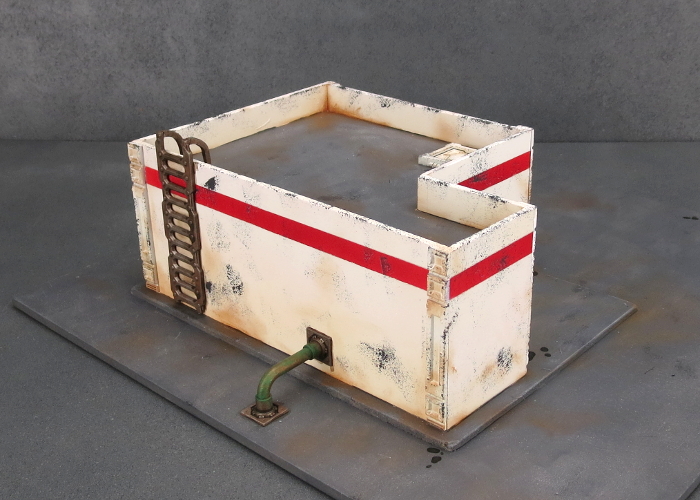 You're viewing a weblog entry titled Terrain Spotlight: Building made from foamed PVC and the Maelstrom's Edge Terrain Sprue. If you like this entry you might want to:

Terrain Spotlight: Building made from foamed PVC and the Maelstrom's Edge Terrain Sprue