A few weeks back, I built an Epirian Stockyard, just to get an idea of how some more rustic styling would fit into the Maelstrom's Edge universe. So it was with a fairly large amount of delight that I stumbled this week upon some fantastic, inexpensive, western-styled building kits from a company called Plast Craft Games. These are made from die-cut PVC sheets, and make a perfect base for customisation - in this case, with the addition of some parts from the Maelstrom's Edge Terrain Sprue to make a scifi frontier-town building. 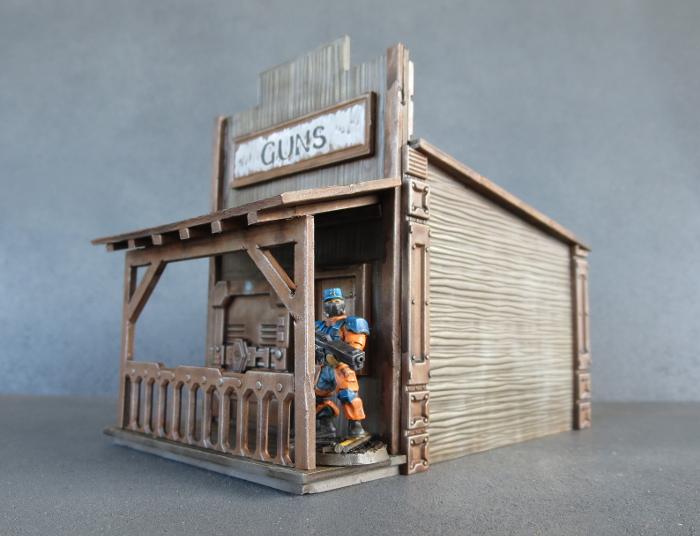 The original kit comes as a single PVC sheet, with the cut panels attached with a few lugs. The PVC is soft enough to cut easily, and while there was some warping of some of the panels (I'm assuming from the pressure of the cutting process) they bend back into shape readily enough. The fact that the woodgrain shown in the store pics of the kit was actually embossed onto the parts was a nice surprise - I had been assuming that was just painted detail. 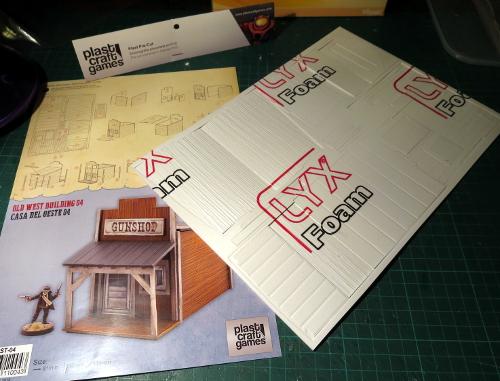 So, the first step was to remove all of the panels from the sheet and clean off the attachment lugs. I was a little surprised to find printing on the outer facings of the building pieces - as I inadvertently discovered three-quarters of the way through assembly, this is actually a sheet of protective film that peels off, once you know about it... It's not mentioned in the mostly-pictorial assembly instructions. 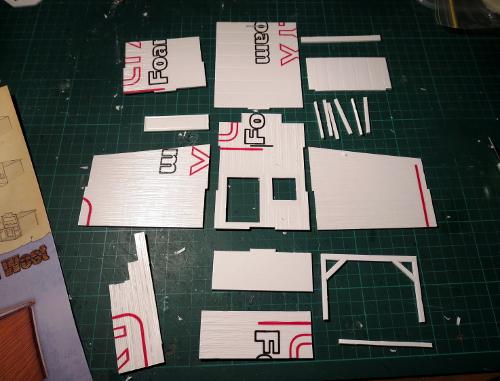 The opening for the door on the front wall turned out to be exactly the right height for the terrain sprue door, although I had to widen it a little. This was the work of a moment with a steel ruler and an exacto knife, and then I did the same for the window, which needed to be widened just a fraction and lengthened a bit. These parts could then be glued in with superglue. 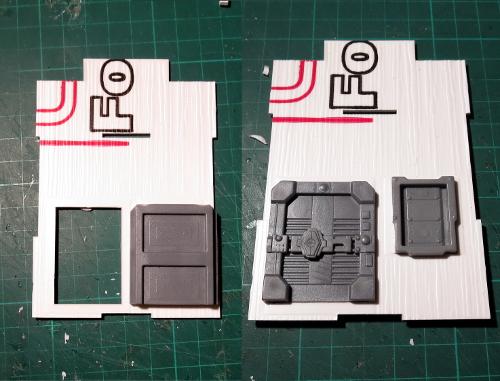 The back wall of the building doesn't have any openings, but I decided to add a second door for in-game versatility. This was done by tracing around the door frame and cutting out a hole for it with the exacto knife and ruler again. 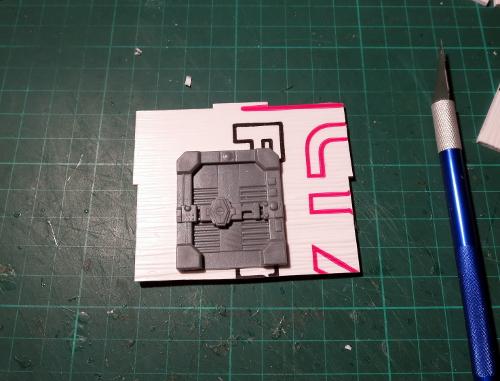 From there, the rest of the building could be assembled. There are some timber braces that run vertically up the edges of each all to disguise the panel joins. I left these on the front and back wall, but flipped them over to hide the woodgrain so that they could be painted as metal to match the terrain sprue parts. Then I added the terrain sprue reinforcing pieces on the side walls and roof, and added a railing to the front porch using a trimmed-down ladder. 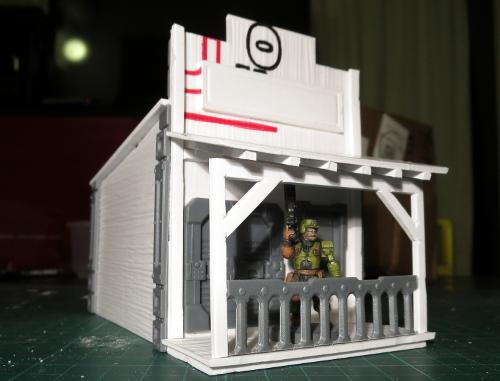 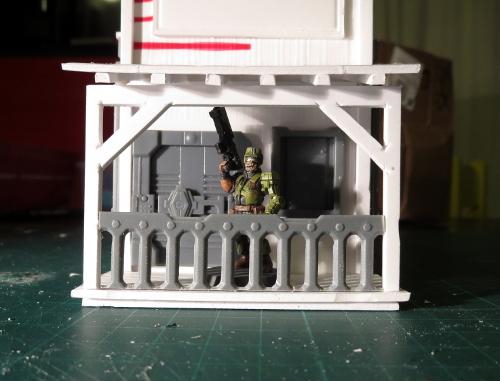 (The porch roof and rails are still unglued at this point, to make painting the front of the building easier.)

I started with a spray of grey undercoat all over. 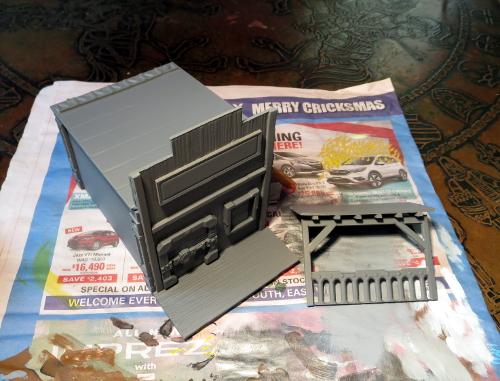 Parts that I wanted to be metal were then given a coat of Vallejo Beasty Brown. 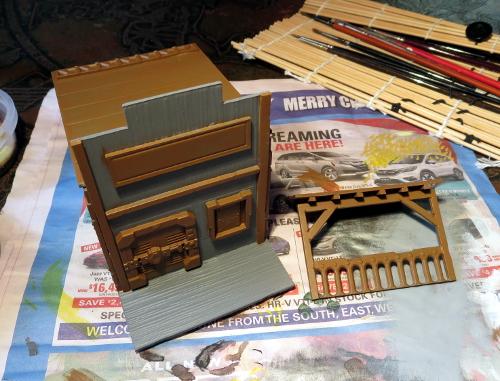 This was followed with a light drybrush of Citadel Boltgun Metal (Leadbelcher, for the newcomers) 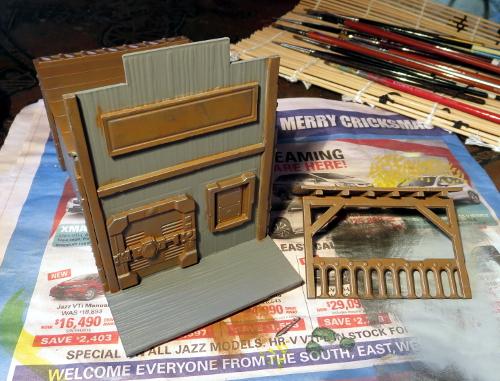 Then the whole building was given a generous wash with Army Painter Strong Tone. 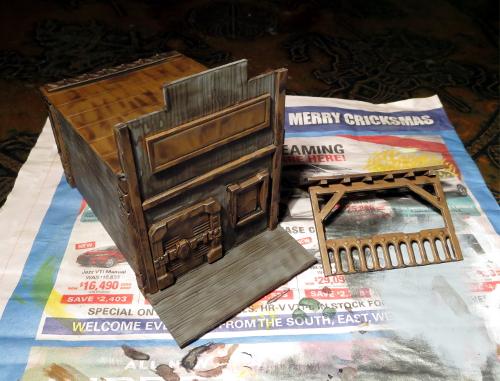 Once dry, the wash was cleaned up a little in a few places where it hadn't covered quite right, and then the wood areas were drybrushed with P3 Jack Bone, with some white mixed in for some lighter areas - this was intended to give the wood an uneven, weathered appearance. The metal parts were also given a light drybrush with the Boltgun Metal again. 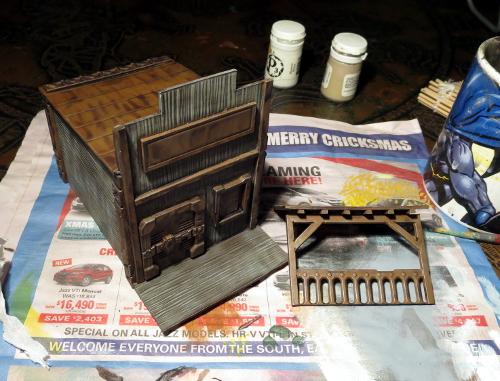 At that point, all that was left was to paint up the lights on top of the doors (Citadel Ice Blue with a drybrush of white) and the green-orange-red lights on the door lock panels, give the moving parts of the door locks a coat of Boltgun Metal to make them stand out from the rest of the weathered metal parts, and to paint the sign on the front wall. 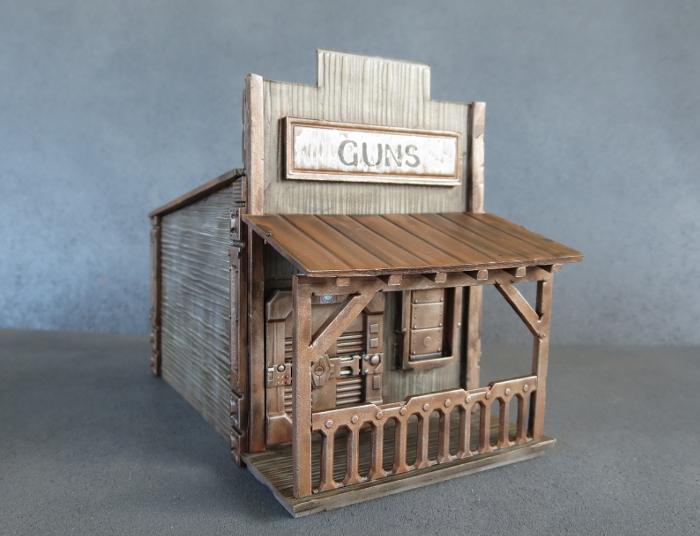 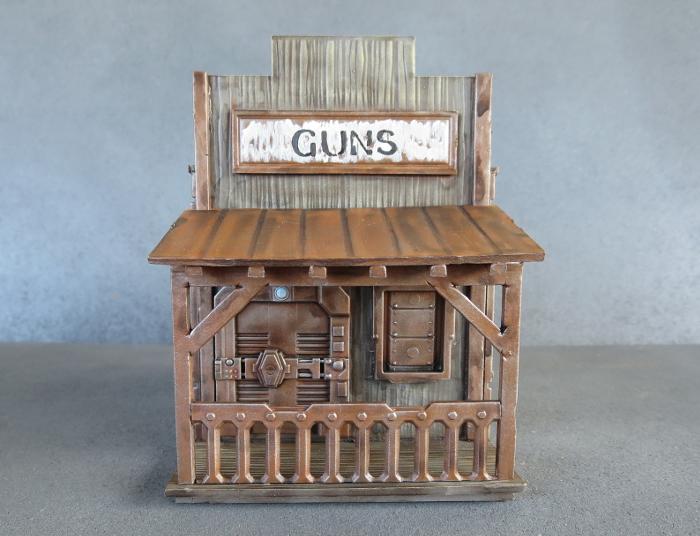 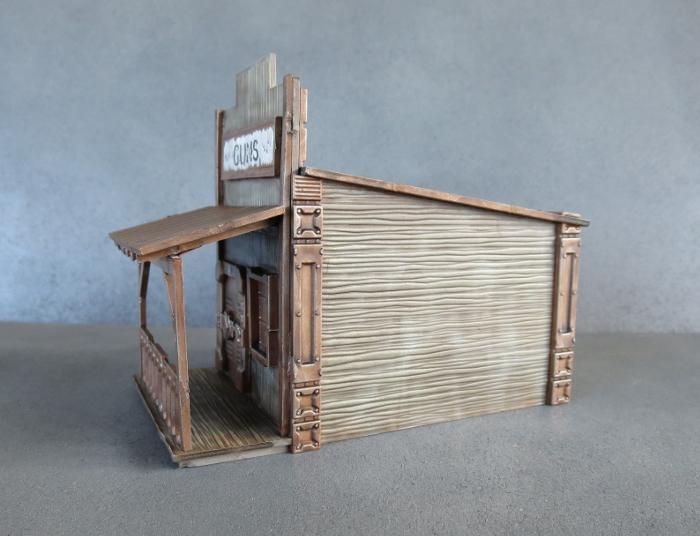 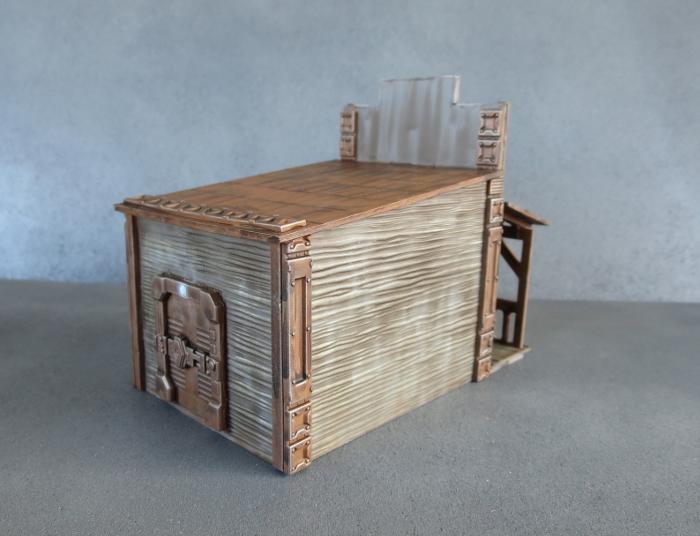 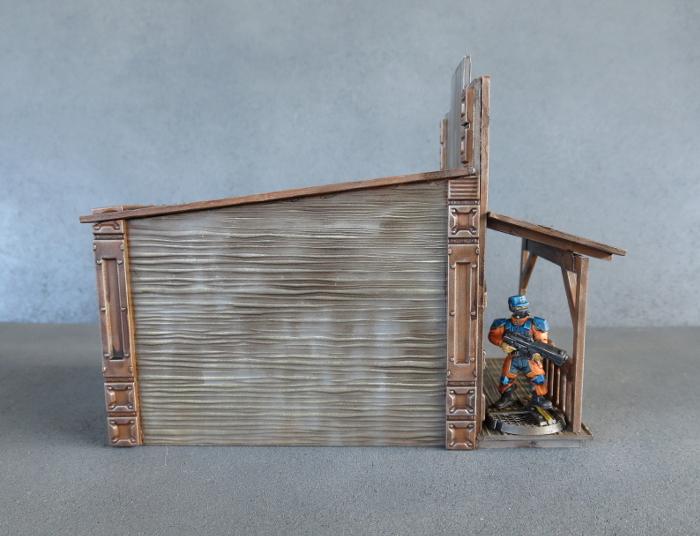 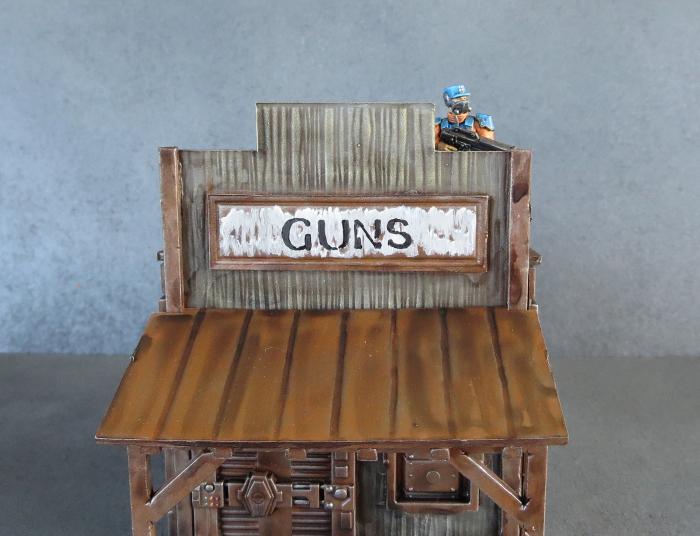 So while Lieutenant Bob there takes up his sniping position on the roof, and I go off to make up a town's-worth of these and track down some models for the Serenity crew, we mosey off into the sunset once more.

As always, we'd love to see what you come up with, so feel free to share your creations on the Comm Guild Facebook page!

You're viewing a weblog entry titled Terrain Walkthrough: Western-themed SciFi Building. If you like this entry you might want to: