On many frontier worlds, terraforming is still underway when colonists move in and start trying to install some sort of civilisation on everything. Where conditions are less favourable, this can require mean that non-native vegetation can need a little help getting established.

One of my very early ideas when the Maelstrom's Edge Terrain Sprue was first released into my eager little hands was for a small bio-dome-style structure where food or other useful plants would be grown during the process of making the planet fully habitable. It's taken a while to get back to it, but this is what I eventually came up with: 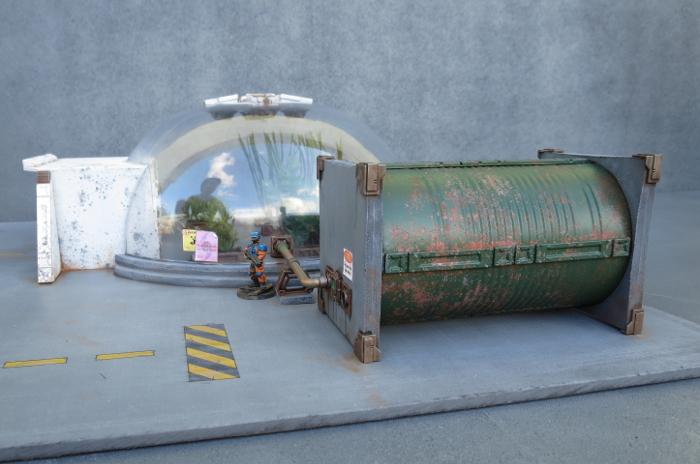 The foundation for this building was a plastic salad bowl, found at a local discount store. 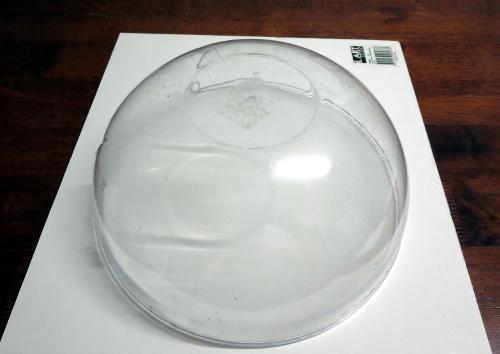 I built a 'gateway' building, to be installed into the side of the dome. This would form a sort of airlock, to allow for environment control inside the dome, and also function as a storeroom for whatever tools or drones were used to maintain the plantlife inside. 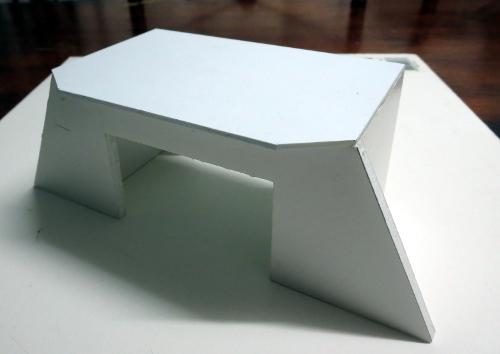 To install the airlock, I carefully cut a square hole into the side of the bowl. Apparently I wasn't quite careful enough, as the fairly brittle plastic cracked just as I was almost finished cutting. (Note for next time - use a razor saw rather than trying to get clever with an exacto knife!) I decided to go with it anyway, as a little damage on battlefield terrain obviously isn't the end of the world. 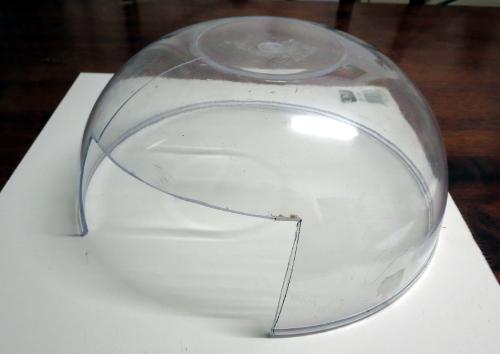 The gateway building was prettied up with doors, control panels and some reinforcing from the terrain sprue. 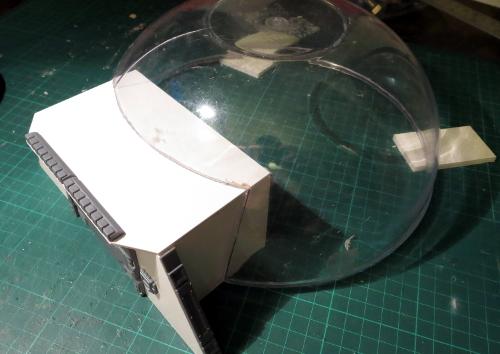 The hole in the side of the bowl is 5mm too short for the gateway. That allows me to add a foamcore rim around the base of the dome, with another ring of foamcore running on top, sealing in the edge of the bowl. 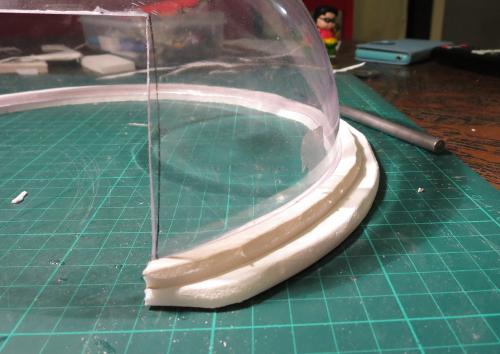 I wanted some detail for the top of the dome, to disguise the bowl's flat bottom. So I took some shutter windows and used a razor saw to cut the backs of the frames so that the windows sit on an angle. 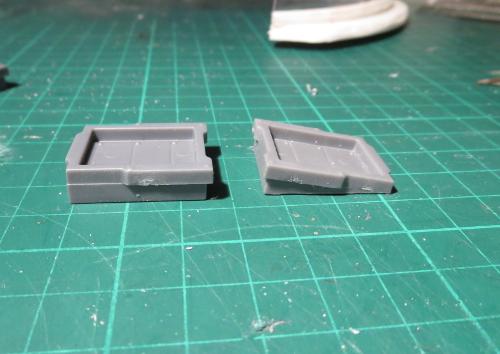 These were then glued to a circle of plasticard cut slightly smaller than the base of the bowl. A square hatch in the middle forms a hub, where I imagine the machinery that controls the shutters would be located. 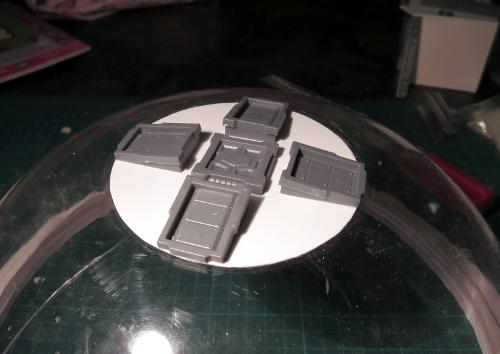 On the inside of the bowl, I added some large pipe fittings, positioned to sit directly underneath each of the shutter windows. This forms a venting system, to allow the atmosphere inside the dome to be vented in an emergency, or to allow controlled amounts of the outside air into the dome. 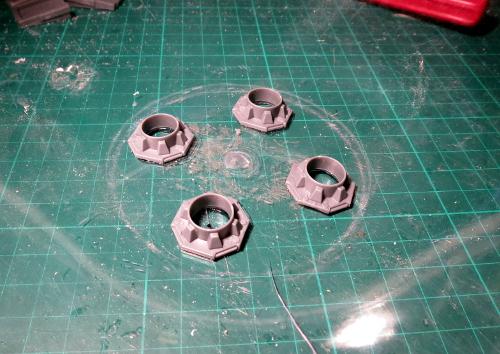 A bunch of reinforcing strips from the terrain sprue were hacked up and glued into planter boxes to go inside the dome. 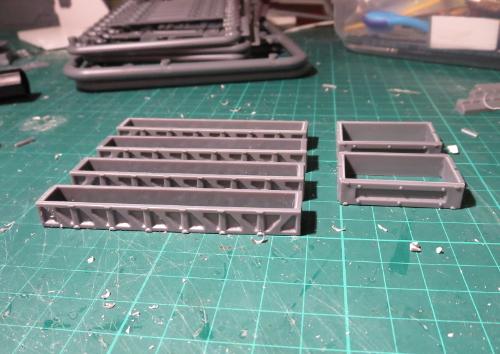 To these, I added a control unit using a control panel and two trapezoid windows glued together with a small piece of foamcore sandwiched between them. This would control the environment inside the dome, administer fertilisers or other chemicals to the plants, or activate the dome's resident drones. 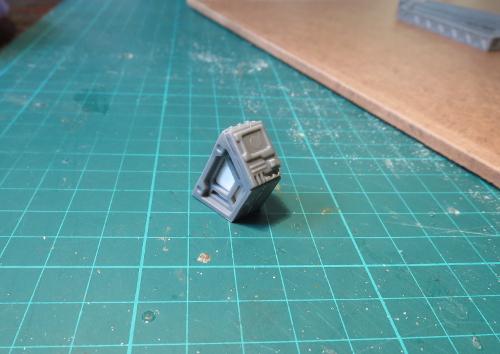 After marking out the inside circumference of the dome on a sheet of masonite, the planters and control unit were glued in place. 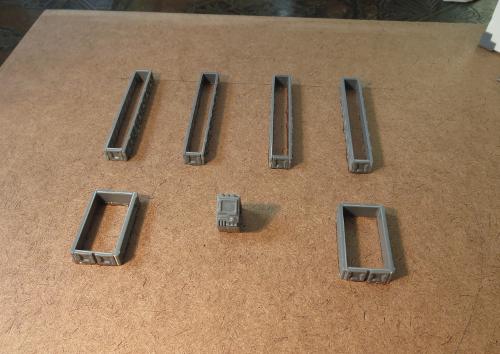 For the plants themselves, I cut appropriately-sized pieces from a few different aquarium plants. These were lightly sprayed with a matt green paint to dull them down a little and make them look slightly less plastic. These would be glued into the planter boxes and the boxes then half-filled with clear craft glue (water effects would be better, but I was in a hurry and craft glue was what I had to hand). 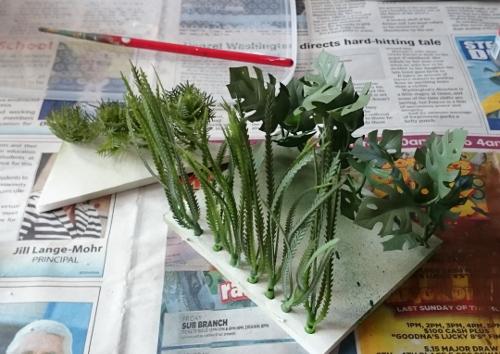 To add a little extra detail to the overall terrain piece, I built a water tank from some foamcore and a beverage mix tin. The ends of the tin are nested into circles cut into the inner sheets of foamcore, for extra strength. 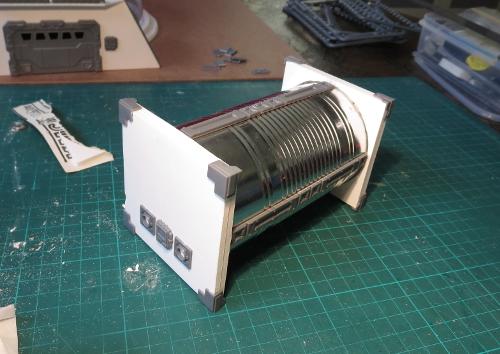 A pipe made from a piece of sprue cut from the terrain sprue and some plastic tube joins the water tank to the dome. I built a support for the pipe from a trapezoid window and another piece of tube, and added small pipe fittings from the terrain sprue to the inside and outside of the dome. The drone tasked with watering the plants would connect to the interior fitting and syphon off as much water as required. 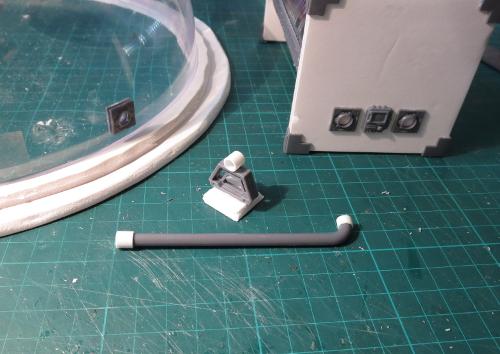 The last thing to do then before painting and assembling everything was to paint any exposed edges of the foamcore with some PVA glue, to protect it from the spraypaint. 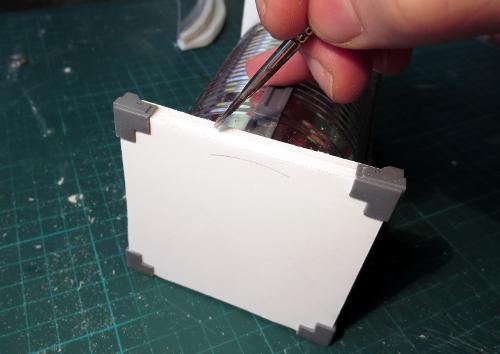 My original batch of buildings for Maelstrom's Edge were painted white with green detailing, and since the gateway building for this one was constructed in a similar style, I went with a matching colour scheme. 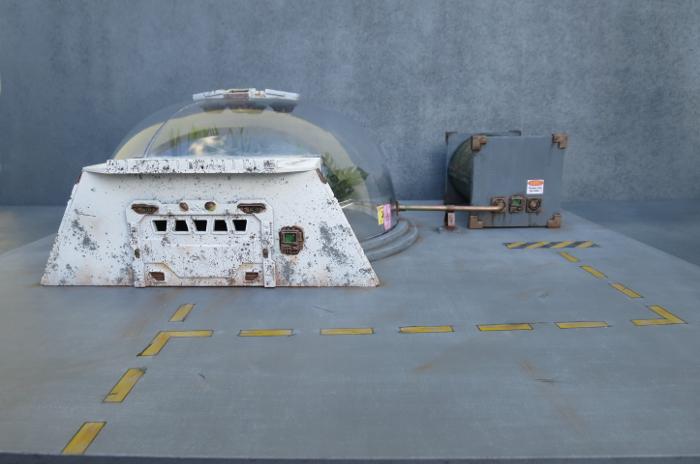 The gateway was sprayed with a grey undercoat, and then a spray of matt white, with salt weathering to give it a nicely aged appearance. 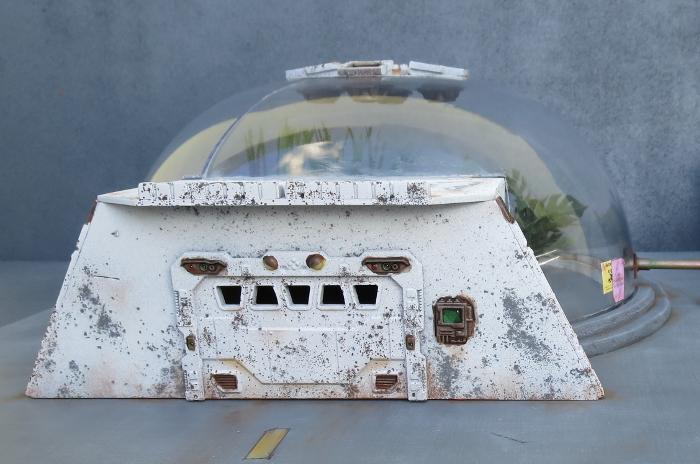 The water tank was painted brown, drybrushed with Citadel Boltgun Metal and washed with Army Painter Strong Tone before being sprayed with a coat of green. 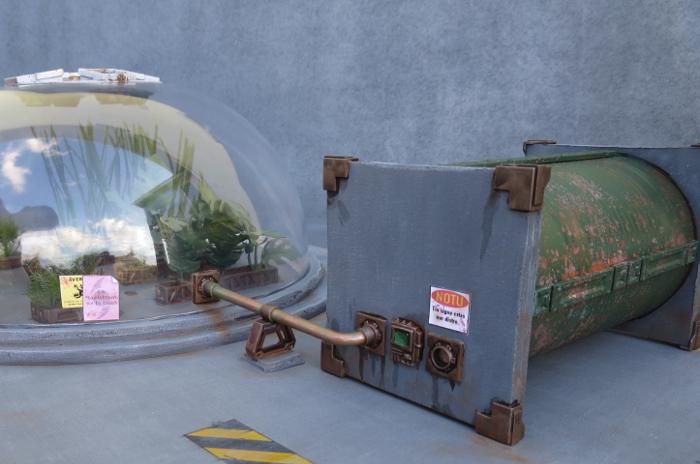 Again, salt weathering adds some age and experience. The end pieces, along with the base board and the dome rim, were painted with Vallejo Basalt Grey and then drybrushed with Vallejo Light Grey. 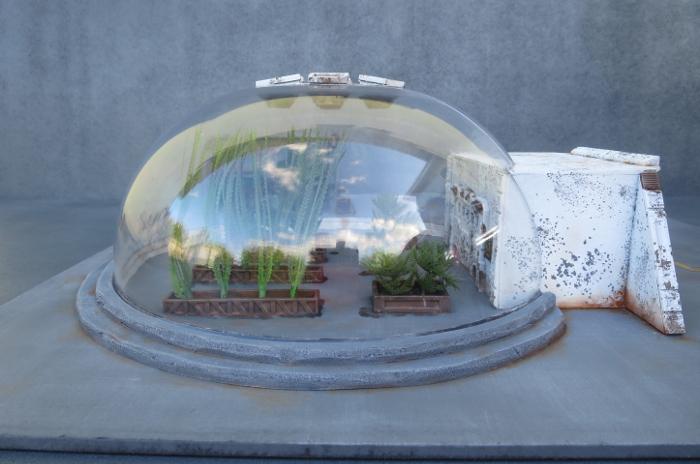 A few touches of Vallejo Beasty Brown add some dirt around the place, and some signs created in Gimp, printed out and glued in place add some character touches. 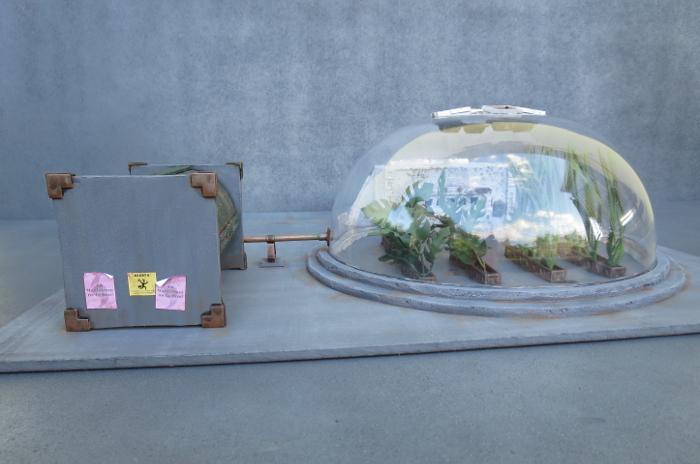 The interior needed to be all painted and the plants glued in place before the dome could be glued down. 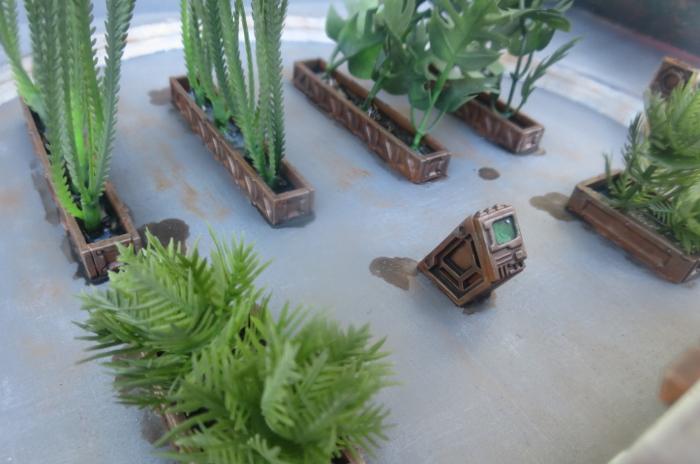 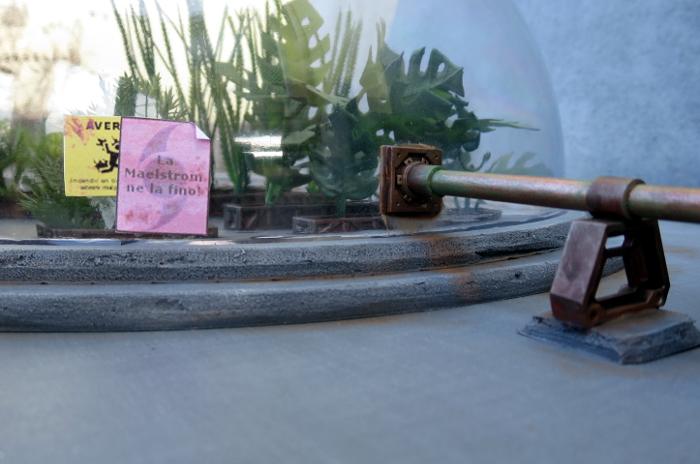 I considered leaving the gateway unglued, so that it could be pulled out to put models inside the dome, but figured that as cool as that might look, there was little actual point in being able to do so in-game, so for a gaming terrain piece that was an unnecessary bit of fiddliness. 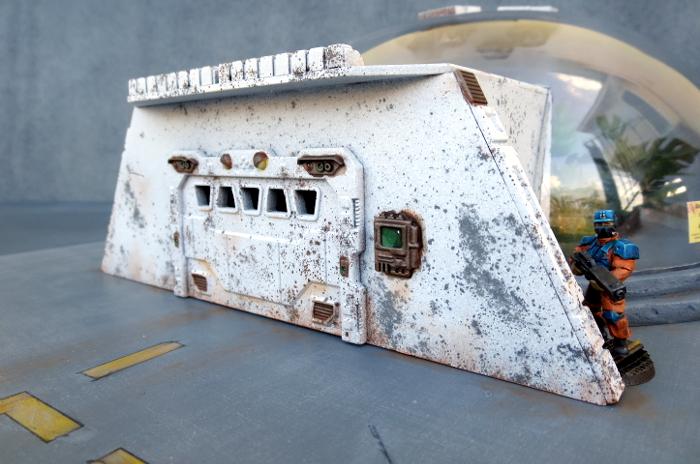 A yellow guideline adds a little extra detail to the broad expance of base. The base was deliberately large - the dome and water tank make for a fairly hefty line of sight blocker, so I wanted to leave plenty of free space around it. Where a little more cover is required, scatter terrain (barriers, crates, industrial bins, and the like) can easily be added to the open front corner. 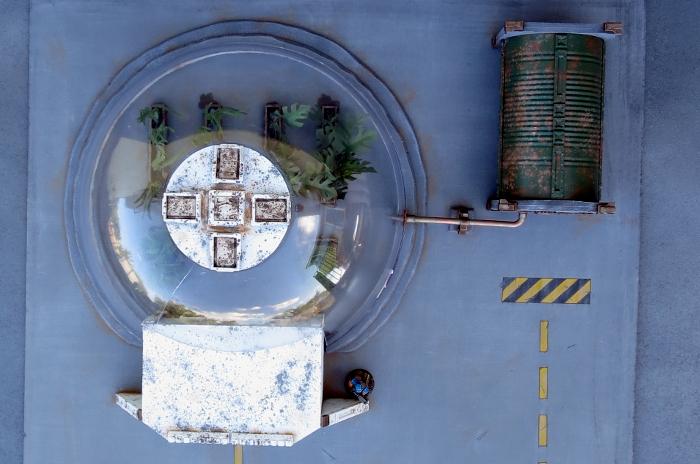 And that's it - another terrain piece just waiting for a battle to spring up around it.

To build your own plantation dome, or a transport hub, or whatever other round thing strikes your fancy, you can pick up the Maelstrom's Edge terrain sprue from the online store (in a handy 2-pack!) here.

Unbelievably cool. You should charge admission for the privilege of playing at your gaming table.

Great looking model. I have got to get me some of the scenery sprues:0)

You're viewing a weblog entry titled Terrain Walkthrough: Plantation Dome. If you like this entry you might want to: