Following on from my improbably-mobile Pa'ku conversion, I'm continuing the jetpack theme this week with a bit of a closer look at the Epirian SecDef Boostpack Infantry models released last month. 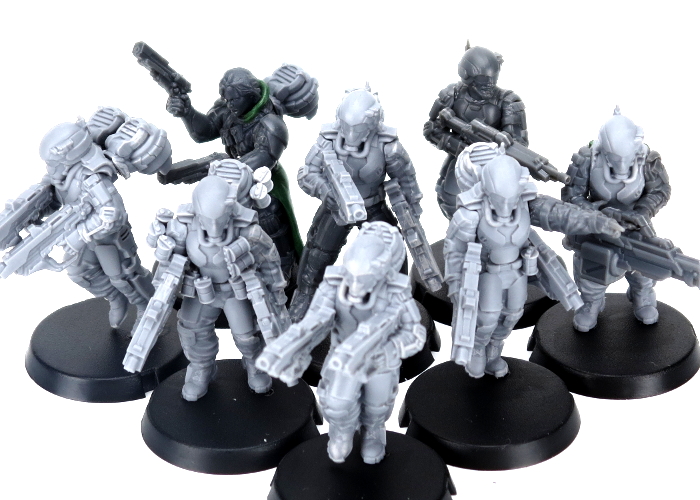 Released in a pack of three models, Boostpack Infantry take to the table as a SecDef Rapid Intervention Team, where their boostpacks and twin carbines allow them to get in close to the enemy and lay down a withering hail of fire. 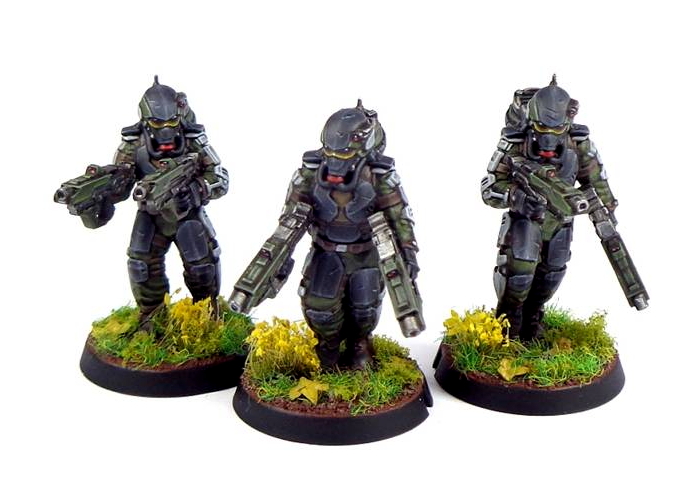 The high quality resin kit comes with the body and head as a single piece, with separate weapon arms, boostpacks and grenades. The unit's rules card also gives them access to a couple of special weapon options - these will be coming in a separate release very soon! 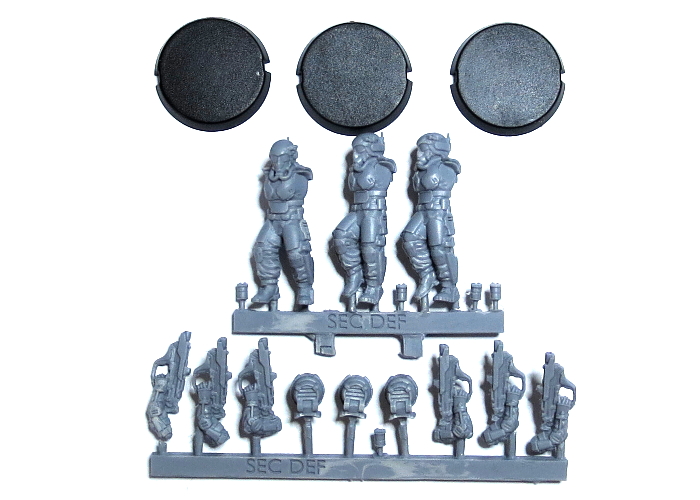 Assembly is really straightforward - the boostpack goes on the back, with a handy locator pin slotting into the model's backplate, and the arms go where you would expect, and are fully interchangeable between the three models. 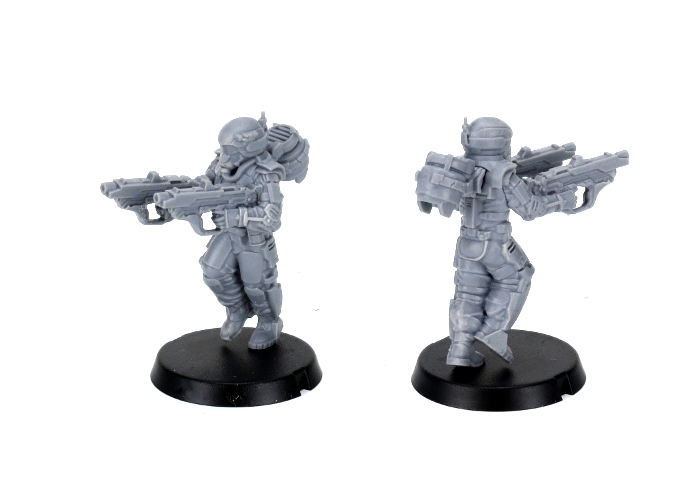 There is no specific mounting point for the clingfire grenades - you can glue them to the belt, chestplate, thighs, or wherever else seems appropriate. 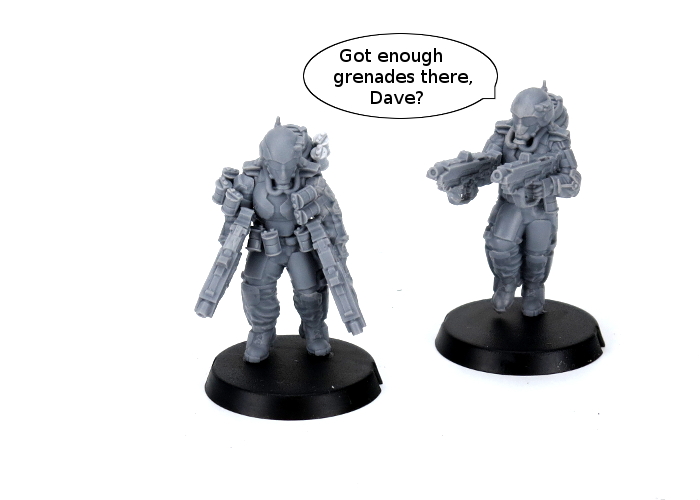 While the armour is the same as the regular plastic SecDef models (aside from the head!), the shoulders are slightly different to allow for the boostpack mounting plate extending up over them. You can sub in arms from the plastic sprue though by removing the small shoulder pad piece shown below in red. 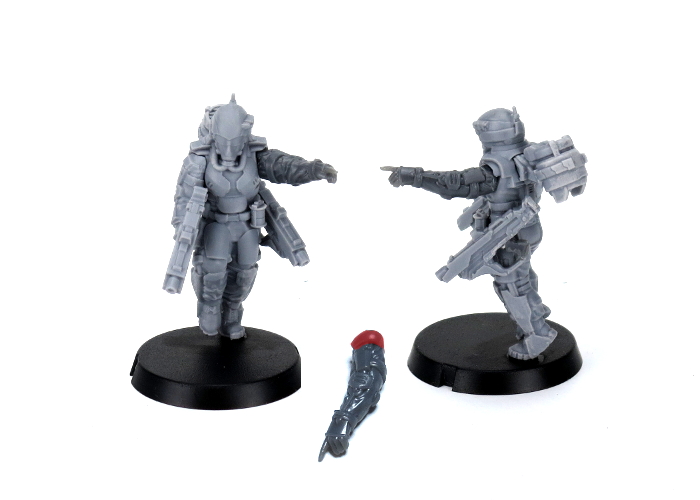 With a little more work, you can create gasmask-equipped SecDef Tactical Teams, by using the plastic arms and filling in the boostpack mounting point with a little green stuff putty. 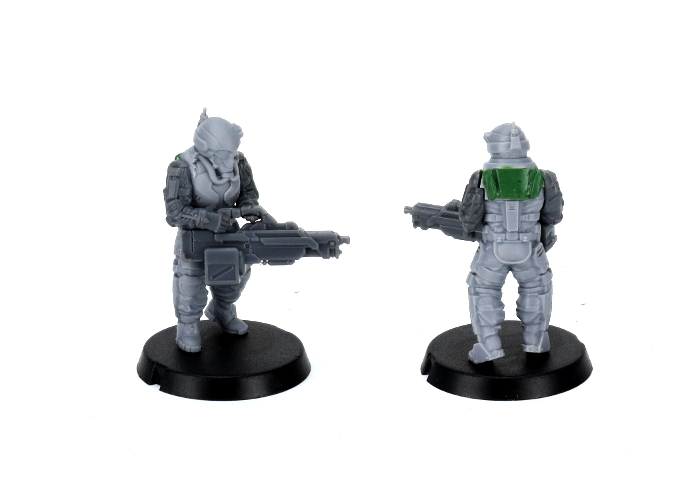 For a little more leg variety, you can use a sharp hobby knife or razor saw to cut through the bodies just below the belt. This allows you to glue on legs from the plastic SecDef to mix up your boostpack models, or use the resin legs on your regular SecDef teams to add some running models. 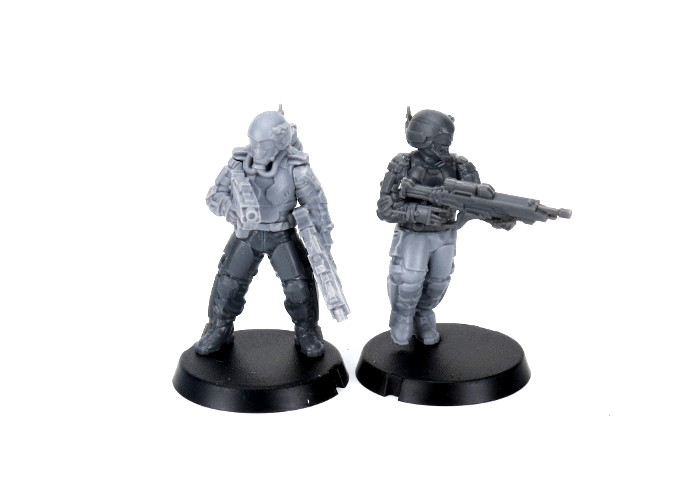 SecDef Sergeants have, from time to time, been known to requisition the best gear for themselves. This sergeant has given himself a bit of a boost with a twin-turbine boostpack, made by trimming off the locator pin on the pack and gluing two boostpacks side by side to the model's back. 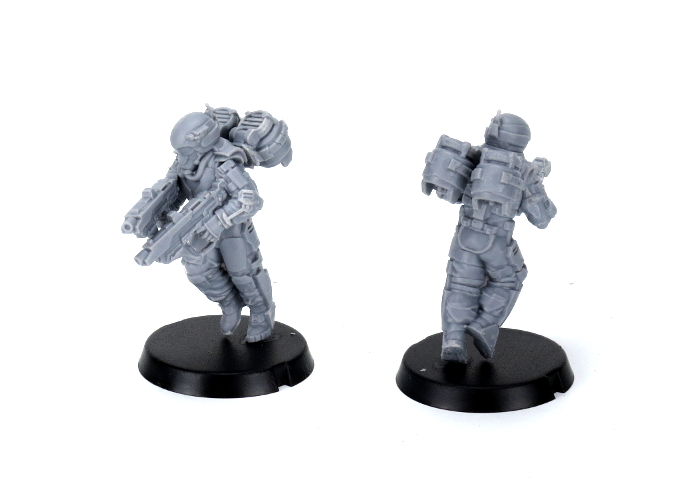 Finally, why should SecDef have all of the fun? While boostpacks are notoriously unreliable and difficult to keep operational, it seems likely that some Broken chieftains or techs with the right technical knowledge would be unable to resist the lure of the extra speed afforded by a scavenged unit! 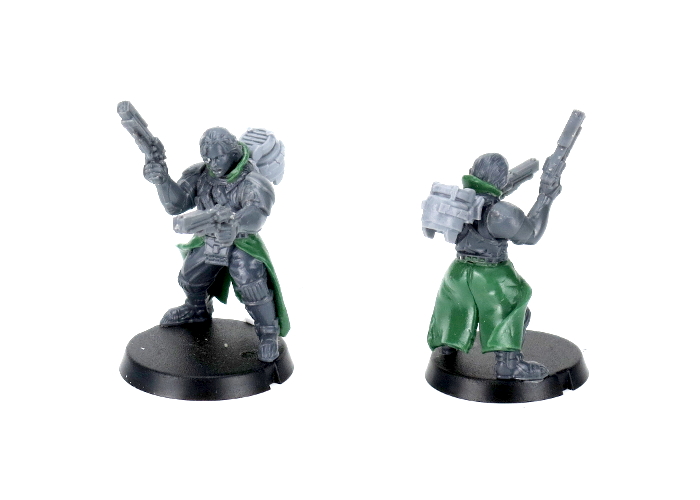 To add a Rapid Intervention Team to your Epirian force, you can pick them up along with the rest of the Maelstrom's Edge model range from the webstore here.

You're viewing a weblog entry titled Modeling Spotlight: Epirian Boostpack Infantry. If you like this entry you might want to: