This week, I'm kicking off something a little different for the new year. It's a bigger project than normal, so I'll be spacing it out over a couple of articles, with the aim being to build a detailed display board to use as a backdrop for photographing miniatures. I wanted something that would have plenty of open areas for placing miniatures, and a few different contrasting areas to allow some variety in backdrops with just the one piece. And so 'Landing Pad 16' was born:


Normally when I'm building terrain, I have a rough idea in my head of what I'm going to build, and I just wing it from that. Because this one was a little more complicated, I started by sketching out a rough design, and then translated that into a 1:1 plan on a sheet of cardboard. 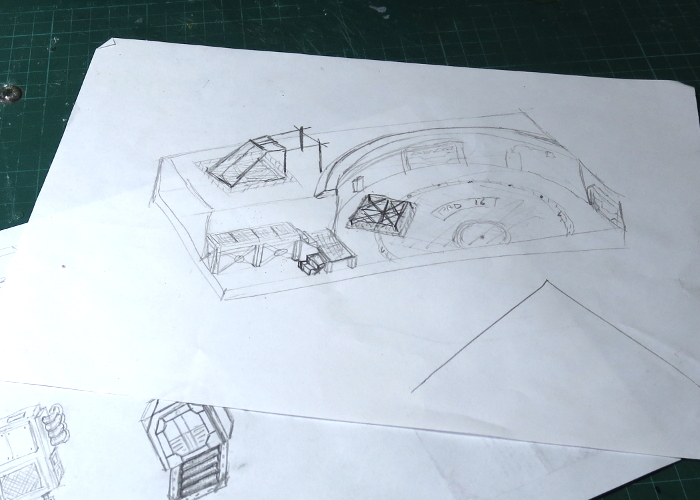 For the bulk of the structure, I chose to use foamed PVC sheet. This is a lightweight, but strong plastic material that is easy to cut and shape, and takes extremely well to superglue, which allows it to be used to build solid, detailed structures.

I took my plan and drew up a neater version on the PVC, and then used an exacto knife and steel ruler to cut it out. 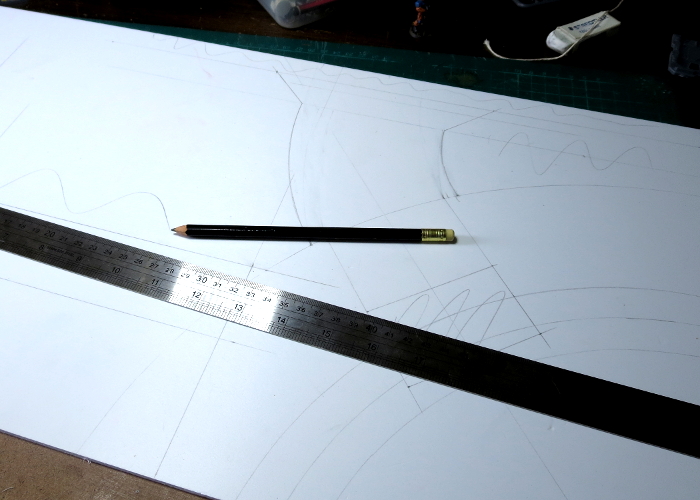 I had a slight measuring mishap when scribing some panel lines on the floor piece. Rather than starting over, I just flipped the floor over, making the build a mirror image of my original design. The floor was layered, to allow for some depth in the detailing. With the floor marking out the basic shape for the structure, I could start adding the walls, shaping the PVC to the outline of the building. 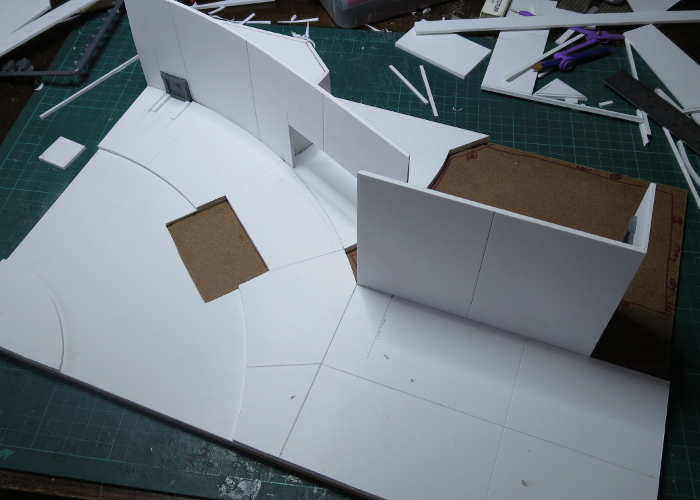 The foamed PVC is quite flexible, but I added a curve to the landing pad wall by heating the PVC in boiling water, curving it around a biscuit tin and letting it cool. This wasn't super-effective, but gave it enough of a lasting curve to let it bend more easily to the required shape. Having the natural bend in there means that the PVC isn't trying to spring back as hard against the glue line, giving a more solid joint. 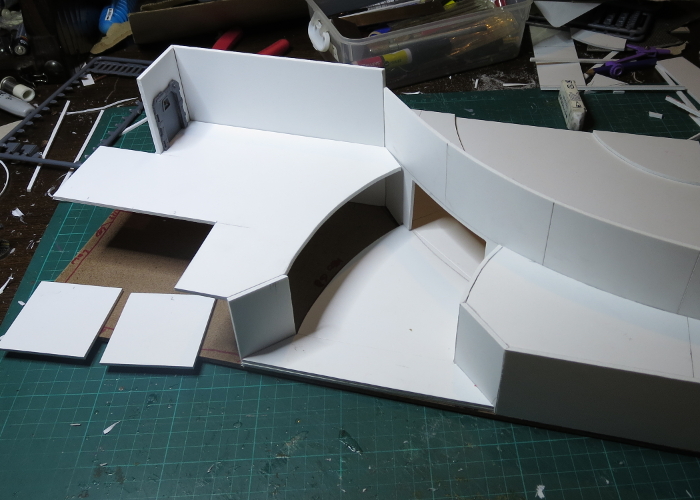 As with all of my Maelstrom's Edge buildings so far, detailing on this one is added courtesy of the Maelstrom's Edge terrain sprue. I created two hexagonal windows for the landing bay freight access corridor by gluing together pairs of trapezoid windows along their long edges. 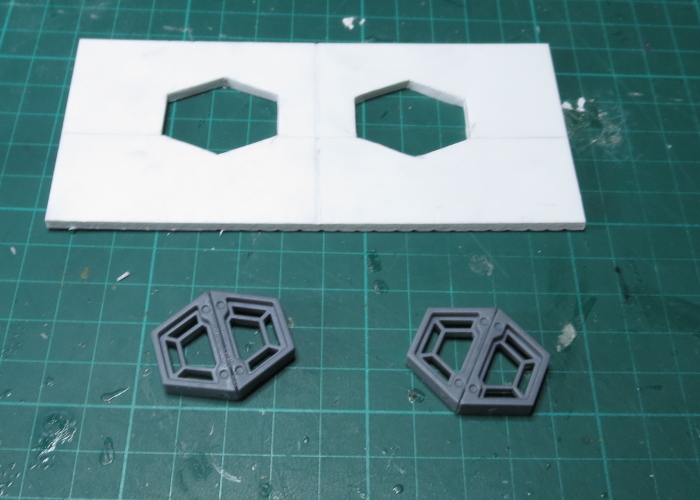 As I built up the structure, the plan changed a little from the original sketch. I added extra access between the two sides of the board, and brought the detail on the 'reverse' side down from the roof to a first-level courtyard. 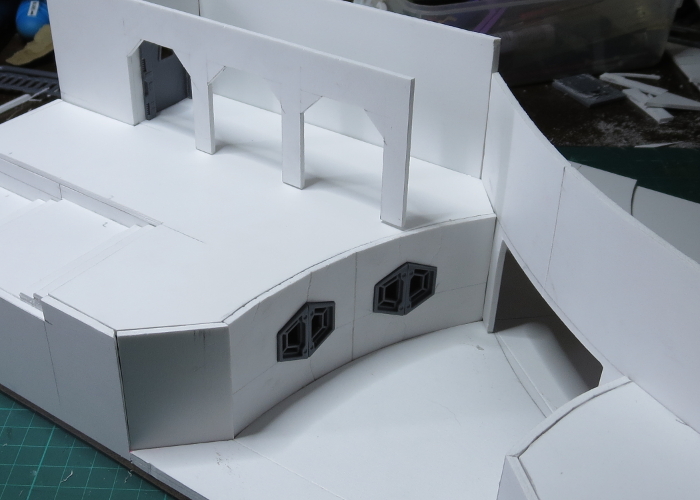 The courtyard needed some depth to allow for some staggered model positioning, so I added a couple of descending platforms on the rear, using layers of PVC to create the steps between levels. 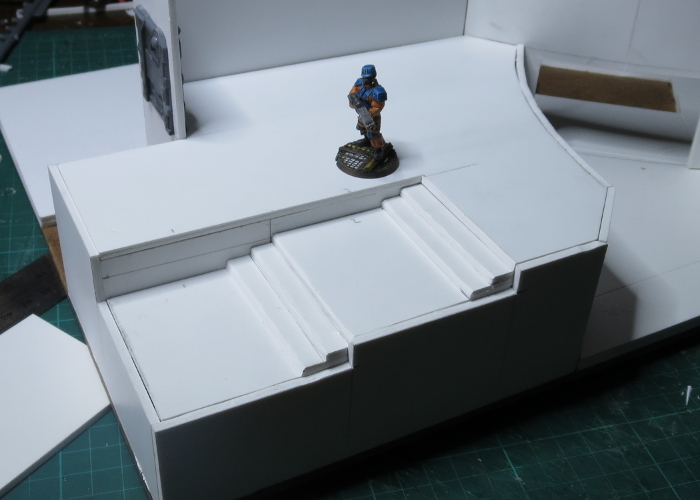 I had planned for a groove to run around the top of the landing pad wall, which would theoretically serve as a runner for a retractable roof - I'm not building the roof, but wanted it to be implied for completeness. For the roof groove to have depth, this needed to protrude into the back facing of the wall, so I built up a box structure using layers of PVC. 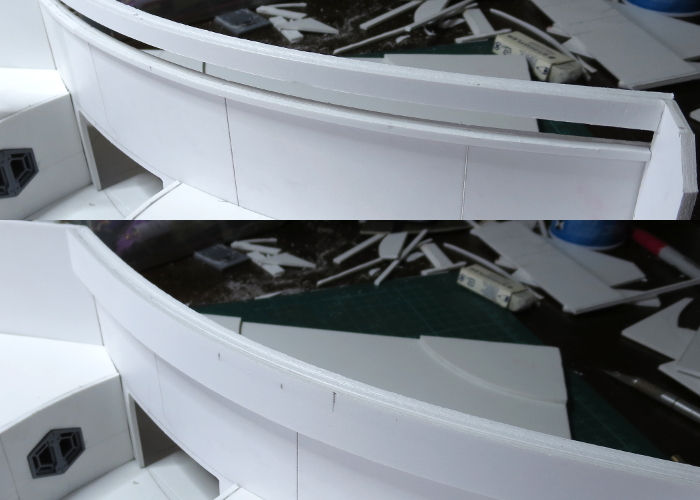 The doors on the terrain sprue have detail on both sides, but as they're intended to be used on external structures they only have the framework on the one side. I created a double sided doorway by removing the frame from the rest of the door using a razor saw. On a second door, I cut the door itself out leaving the frame intact, so I could have an open doorway for the freight access. 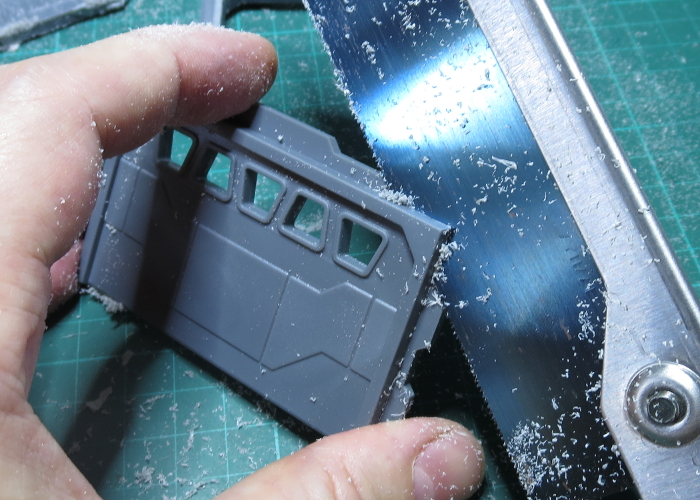 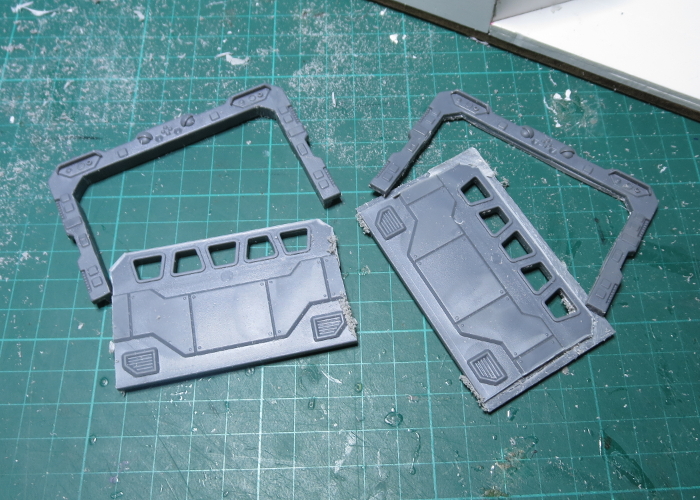 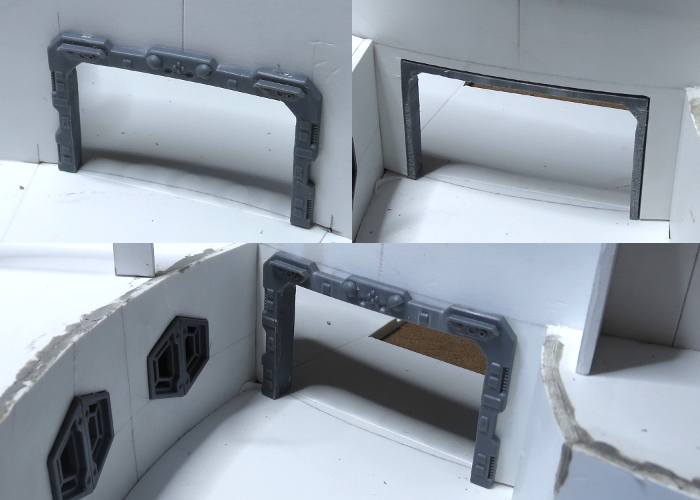 However carefully you cut and glue, you wind up with some gaps and rough edges. I used some putty to fill in wherever necessary, and once set used some fine sandpaper to smooth it down. 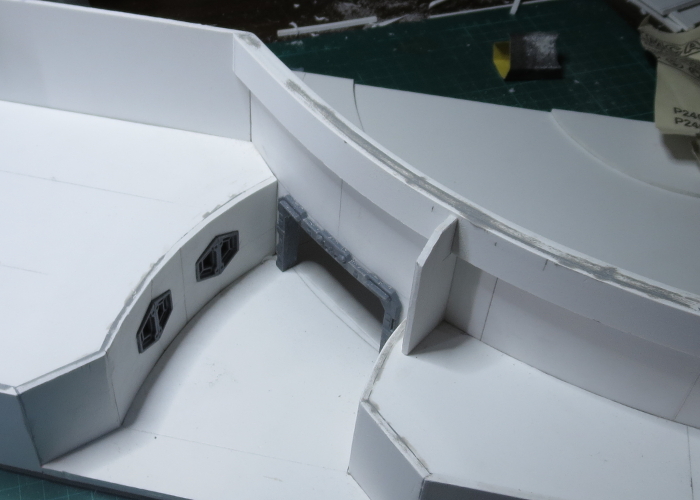 To give the walls some structural detail, I built up a recurring pattern using the support struts from the terrain sprue, and glued this on along the top and bottom of each wall. For curved walls, I carefully bent the strut to shape before gluing it in place. 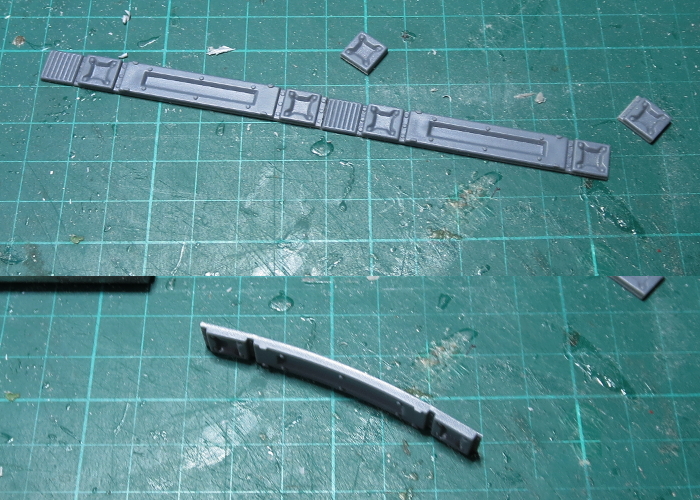 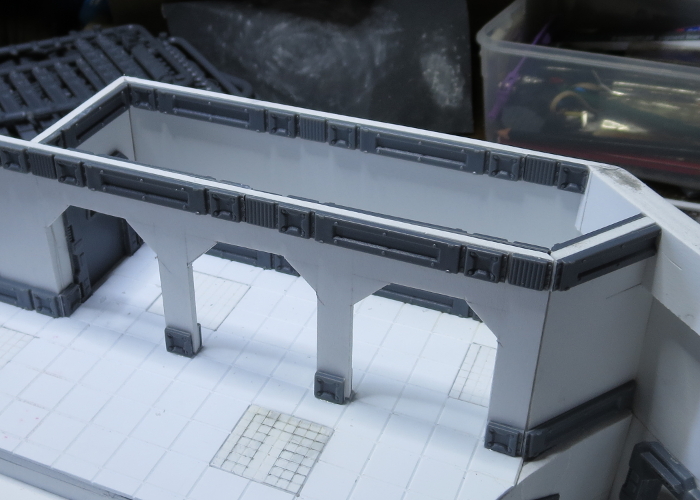 Rather than having bare cement floors everywhere, I added tiles to the courtyard area using textured plasticard. By cutting out squares of tiles in a regular pattern, I inserted some decorative areas of smaller tiles - these will be painted up with the Epirian Foundation logo. 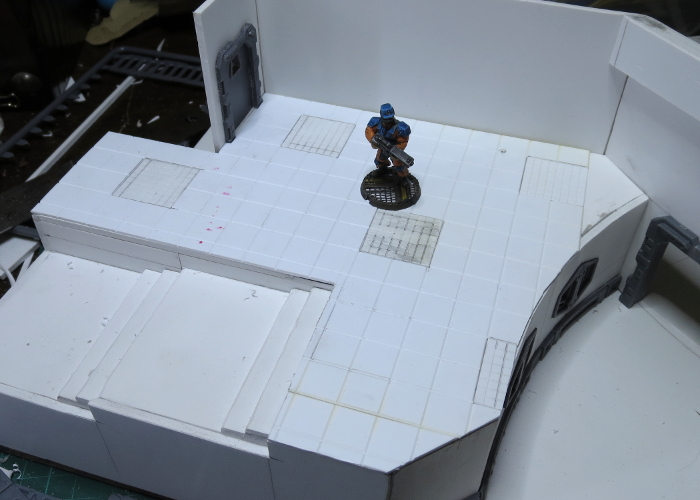 Using ladders from the terrain sprue, and posts cut from sections of the sprue itself, I added a handrail around the courtyard. 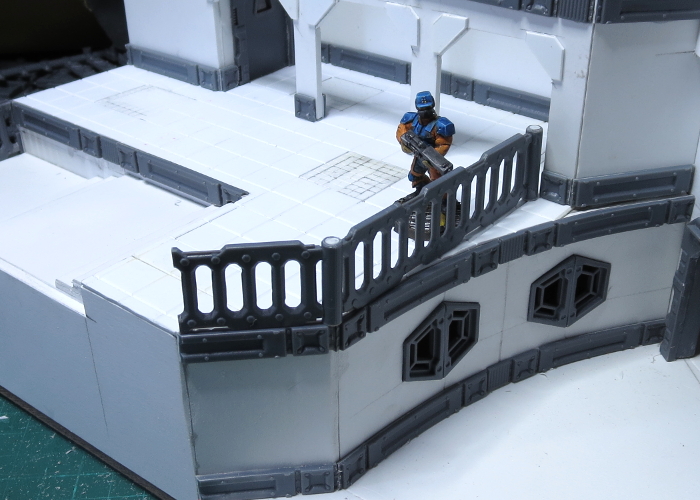 I left the handrail open in a couple of places, to allow some avenues for displaying models and show where the terrain would theoretically continue past the confines of the display board. I did extend the rail part of the way down the stairs, by cutting a piece of 2mm plasticard in a pattern matching the rungs of the ladder. 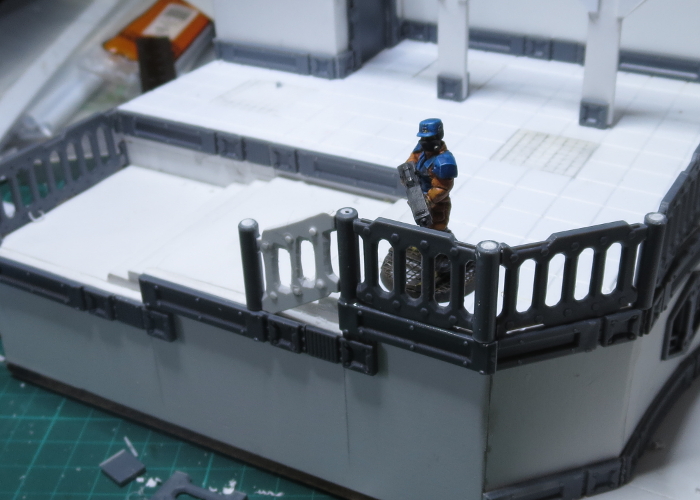 Down the other end of the board, behind the landing pad, I built some nice, hefty pipes using the large pipe fitting from the terrain sprue and some 13mm garden drip irrigation fittings. 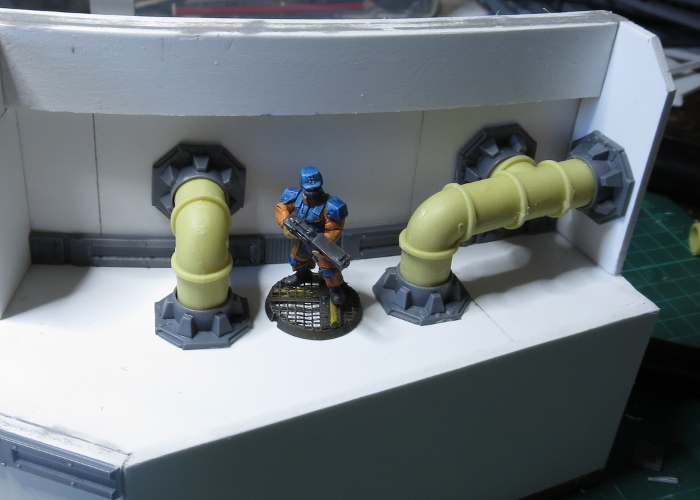 I scattered some smaller pipes around the place using the small pipe fitting, some plastic tubing, and some more scrap sprue from the terrain sprue. 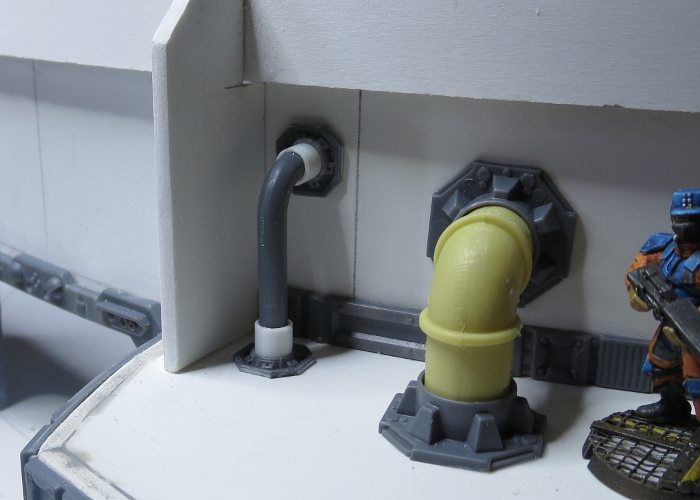 With all of that done, this side of the board is more or less done. There is still a little more gap filling and sanding to be done, and probably some more small details to add here and there. I'll need to add some sort of trim around the bottom edge to neaten everything up, but that will wait until the other side is finished so I can make it consistent. 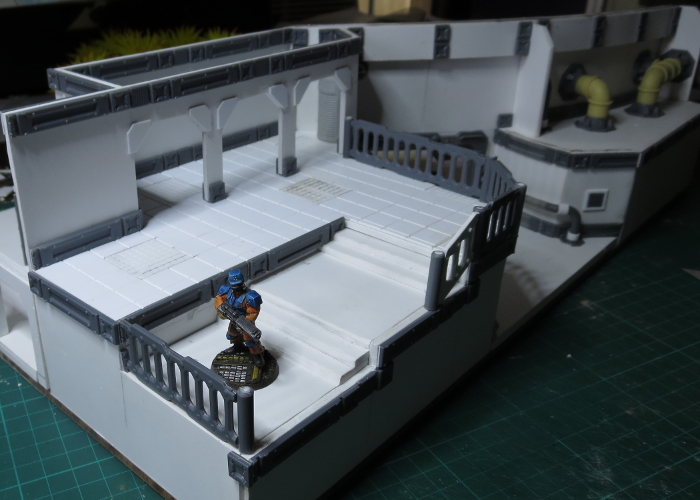 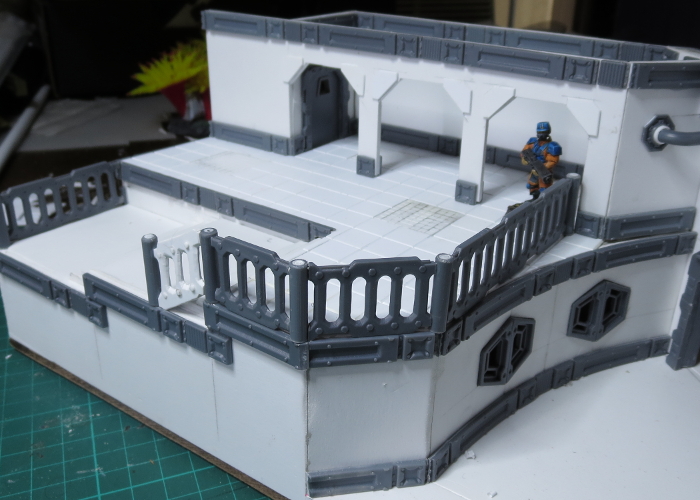 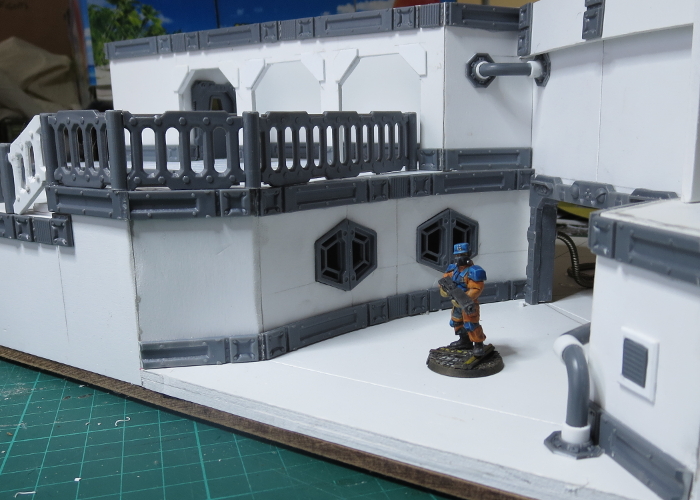 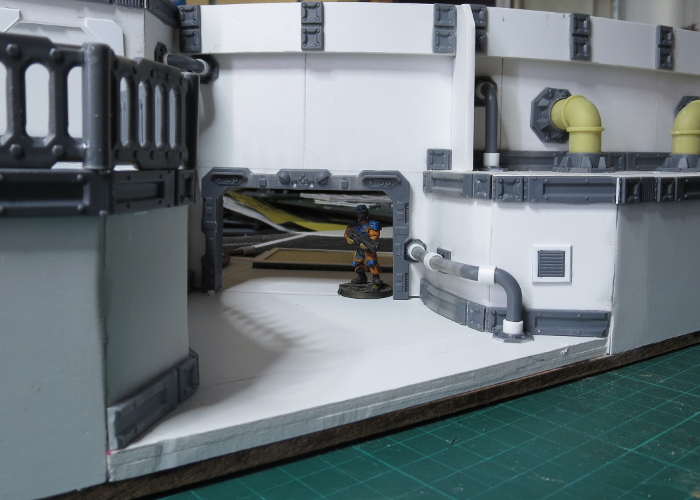 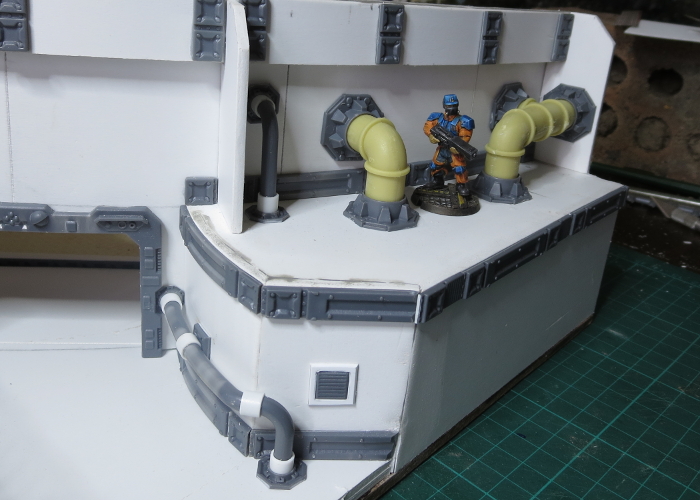 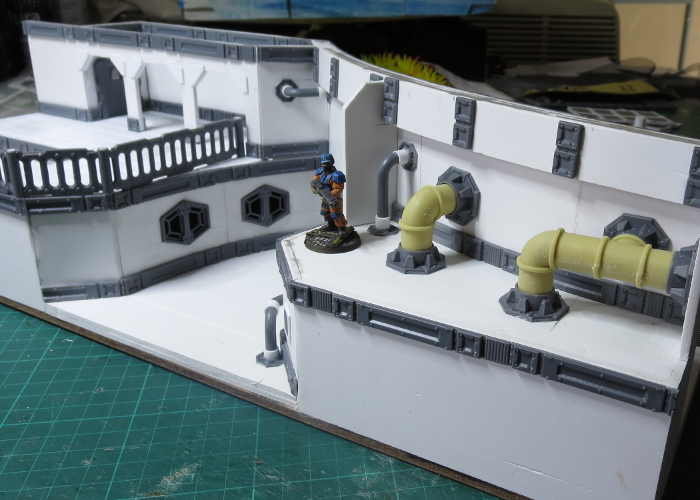 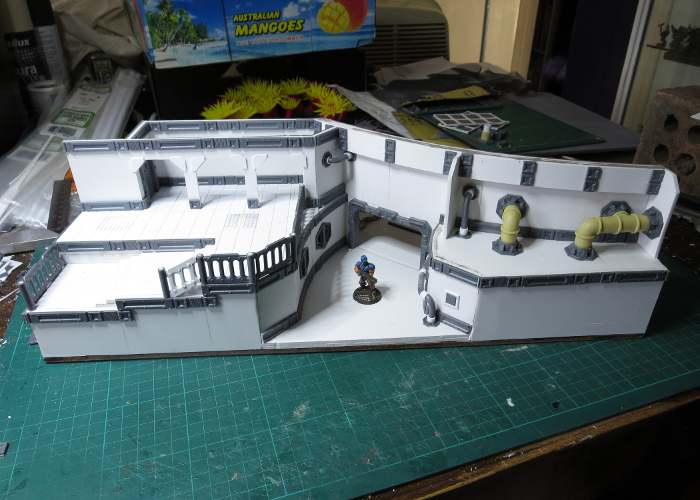 Stay tuned for part two, detailing the landing pad side of the board!

You're viewing a weblog entry titled Terrain Spotlight: Landing Pad 16, part 1. If you like this entry you might want to: