Time to check back in on my landing pad display board build! (If you missed part one, you can find it here)

In the first instalment, I ran through the construction of the 'back' side of the display, so this time around I'm working on the landing pad area. 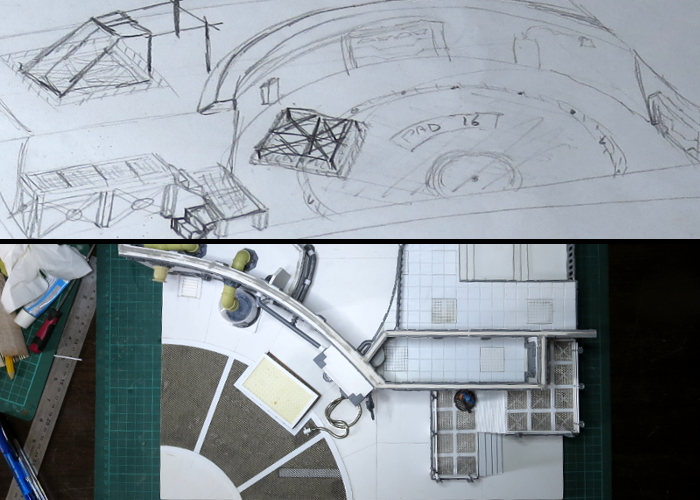 When I cut the foamed PVC for the floor, I left out a curved area that would form the main section of the actual landing pad itself. To fill this in, I cut a piece of 2mm thick cardboard. 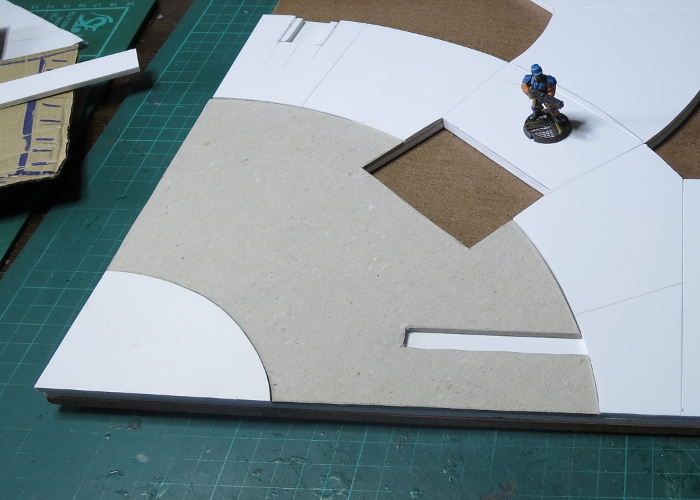 On the top surface of the card, I painted a layer of superglue, and then laid a piece of fibreglass flyscreen flat over the card. Once the glue set, I trimmed the screen around the edges. 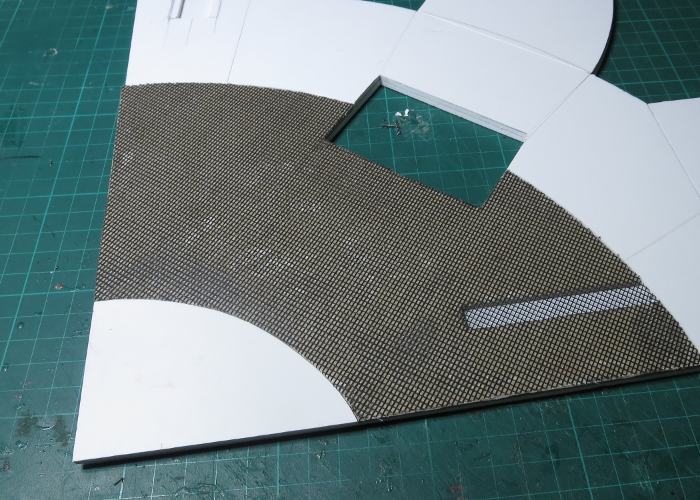 I wanted a section of the pad to have visible pipes under the mesh, and had cut a cavity into the cardboard for this purpose. Painting this with everything glued in place would be problematic, so I cut the screen neatly down one edge of the cavity so that it can be lifted up out of the way to paint the pipes. The pipes were made from sections of an assortment of plastic rods. Once the pipes and the rest of the pad are painted, I'll glue the screen back down and add a little trim over the top to disguise the joint. 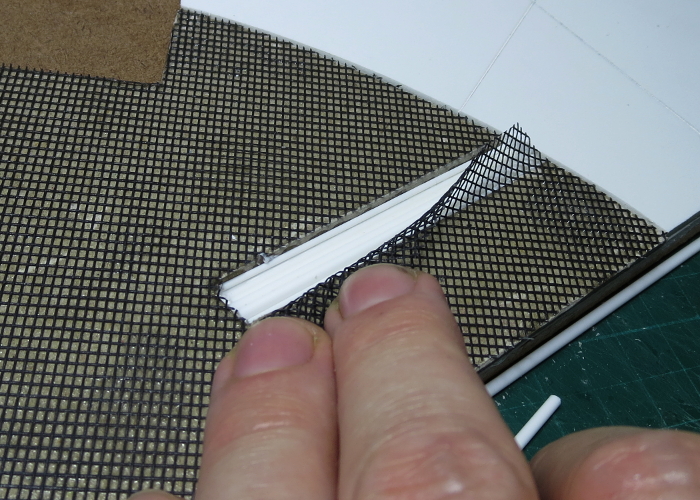 As detailed last week, I built up the walls using foamed PVC. I left a recess around the top of the landing pad wall, along with the pad's retractable roof would slide. 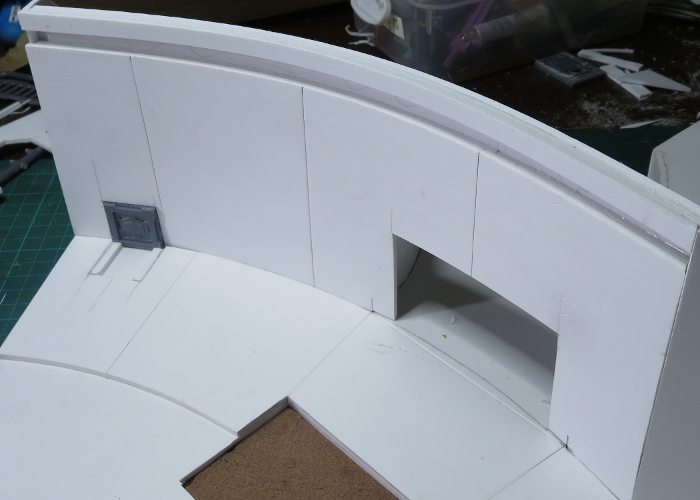 I added support struts from the Maelstrom's Edge terrain sprue along the top and bottom of the walls, with an extra row of reinforcing 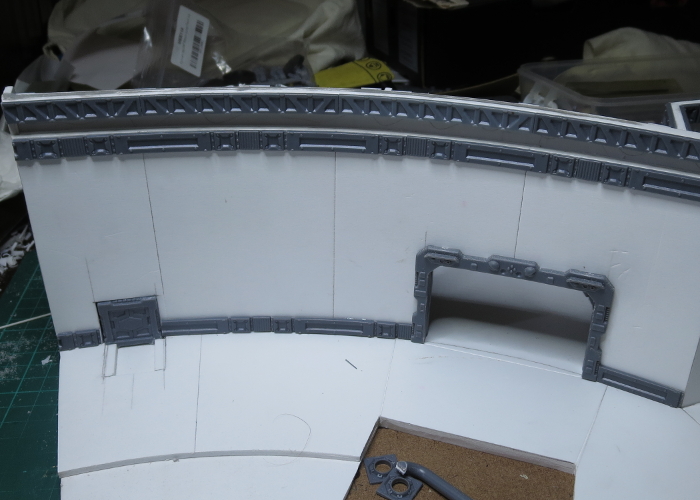 As I had pipes running into the wall from the back side of the board, I needed something on the pad side to match up to them. The first became a heat vent, using a trimmed down large pipe fitting from the terrain sprue and a pipe end from a 13mm drip irrigation setup. I shortened the pipe fitting by cutting across it with a razor saw.

For the second large pipe, I built a fuel storage tank using another drip irrigation piece, a piece of plastic packaging that I think came from a laser printer component, and a clear plastic cap - I don't recall exactly where this piece came from, but I think it was some piece of toddler-feeding paraphernalia. I added some connection ports to the front using the small pipe fitting from the terrain sprue and some plasticard. 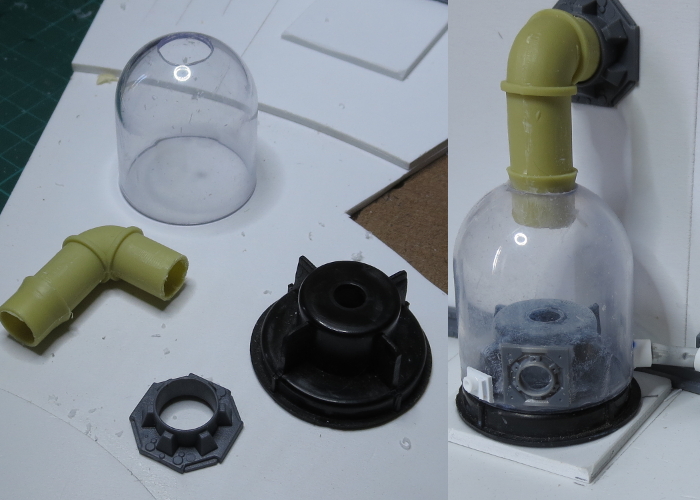 For the smaller pipe, I ran a matching piece of pipe cut from the side of the terrain sprue, and fed this into an air conditioning unit built from foamed PVC and an assortment of gubbinz from the terrain sprue. 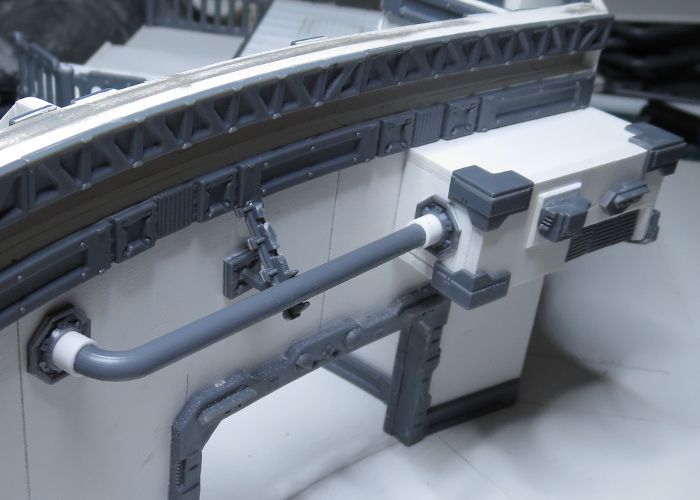 To the left of the pipe I had added a square hatch, just for a little detail, with the intention of this turning into a conveyor feeding into the pad area from elsewhere. For the conveyor belt, I glued in a bunch of plastic tubes to create rollers. 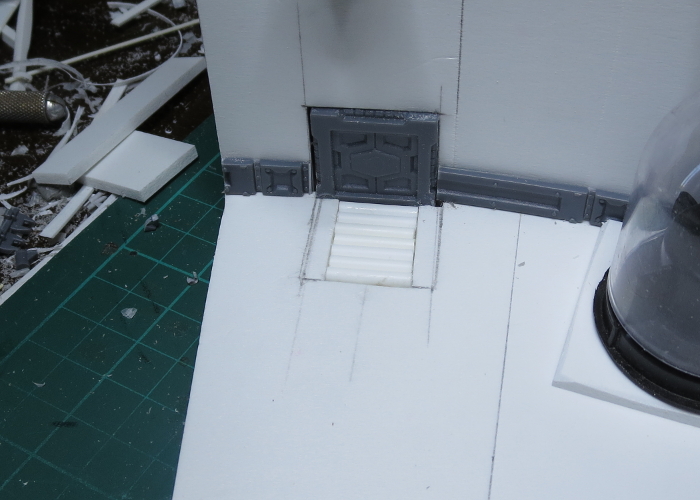 I broke up the vast expanse of flyscreen on the pad with a couple of strips of plasticard, and added a curved strip around the edges to conceal the join between the screen section and the solid floor. 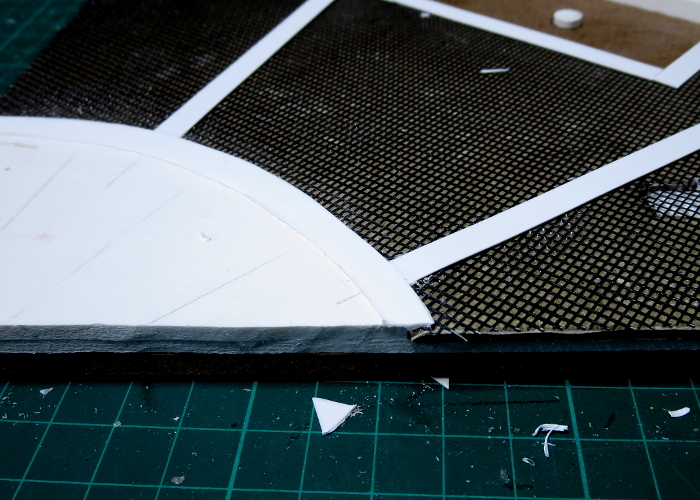 The rectangle cut into the pad floor was intended to turn into a cargo lift. I built the lift platform using a piece of PVC, some support struts from the terrain sprue and a piece of chequer plate plasticard. 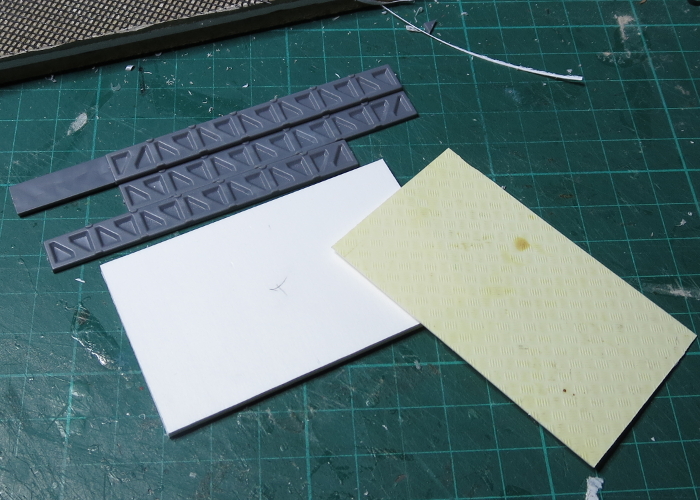 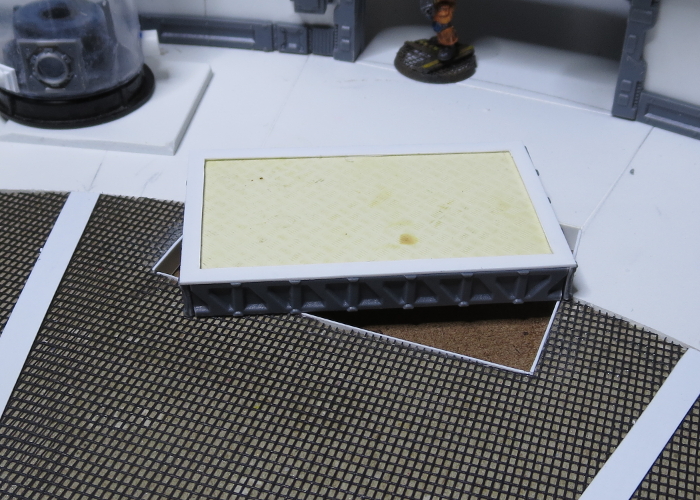 To allow for some variation in the display, I wanted to be able to reposition the lift. To this end, I built a hydraulic lift to go under the middle of the platform using some pieces of plastic tube and a couple of pipe fittings. Thanks to the magic of magnets, this all slots together when needed. Alternatively it can be left out, allowing the lift to sit on the floor. 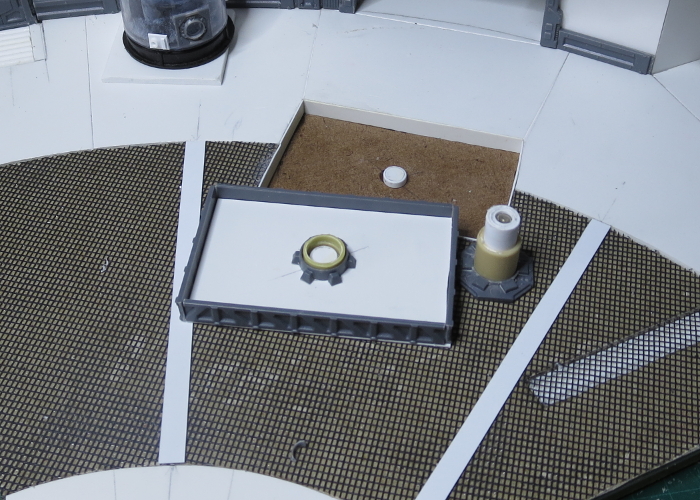 Ships need to recharge as well as refuel. I built a charging port using a shutter window with most of the shutters cut out. Into the resultant opening, I glued a piece of plasticard and some assorted bits and pieces. The charging cable was made from a couple of pieces of plastic tube and the chain from a fob watch I had sitting in my bits box. 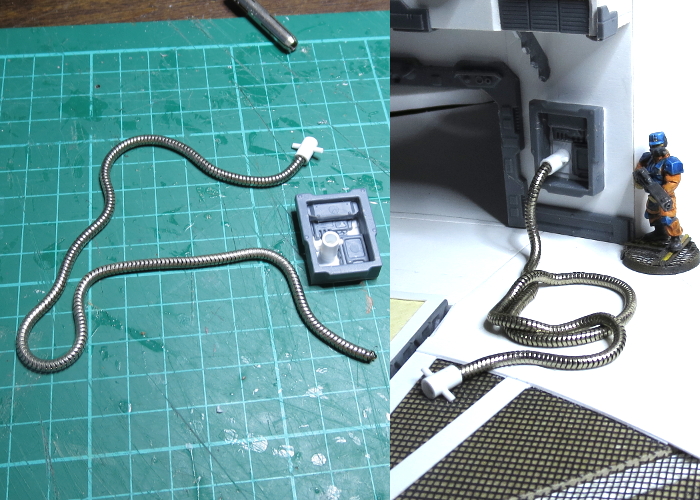 At the other end of the board, I wanted some stairs and decking platforms to create some vertical detail. I cut the shape of the platforms out of 1mm plasticard, and glued on some aluminium mesh cut to the same size. 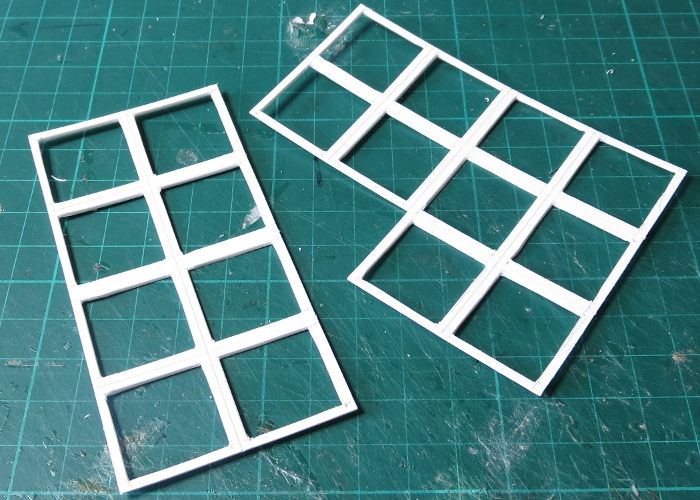 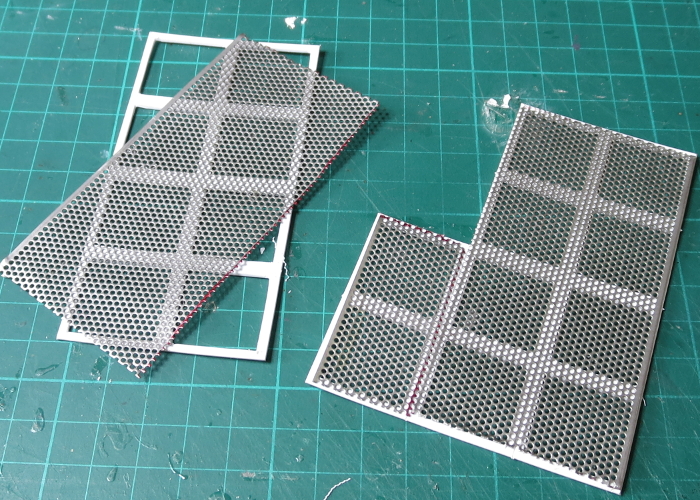 On the bottom of the mesh, I glued matching pieces of plasticard, and then added some diagonal supports using I-beam plastic rod. 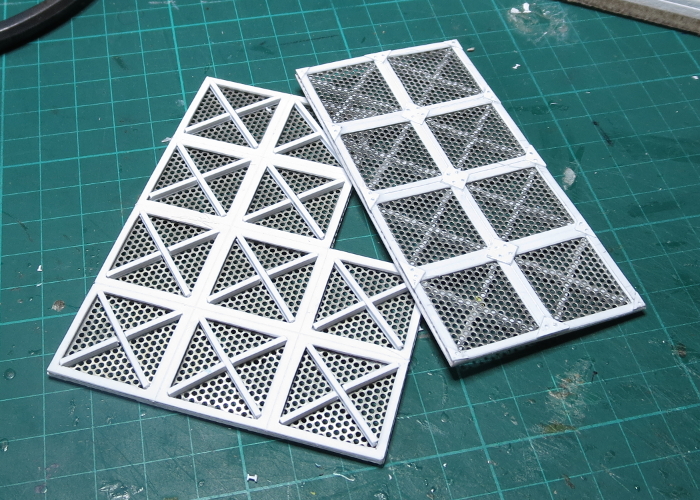 The supports for the platforms we made from foamed PVC, doubled-up to give it some extra thickness. 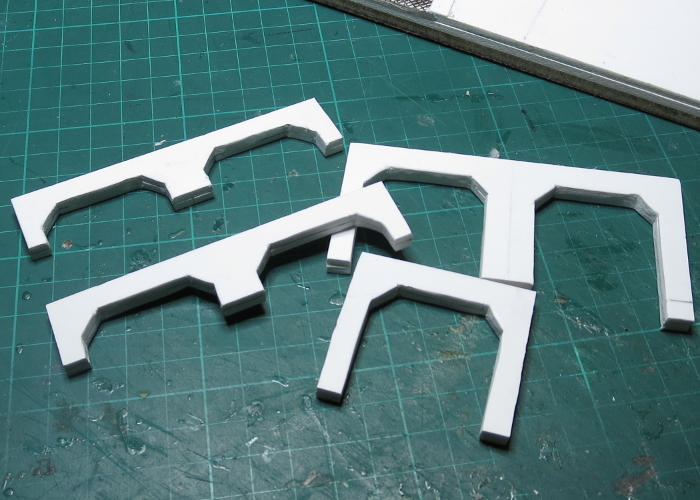 With the legs in place, I added some extra supports for staircases, cut from more PVC. I used strips of textured plasticard for the stair treads. For the moment, I left the platforms and the treads on the lower staircase unglued, to make it a little easier to paint underneath them. 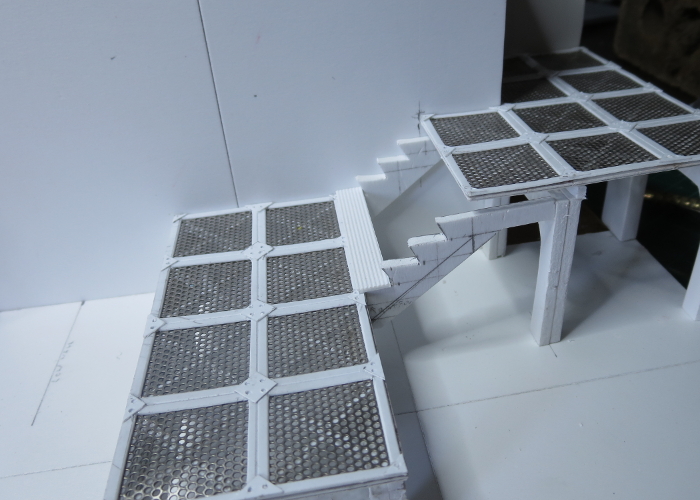 I added some more support struts around the edges of the platforms and on the ends of the legs. I also glued on some posts for handrails, cut from the energy fence piece on the terrain sprue. 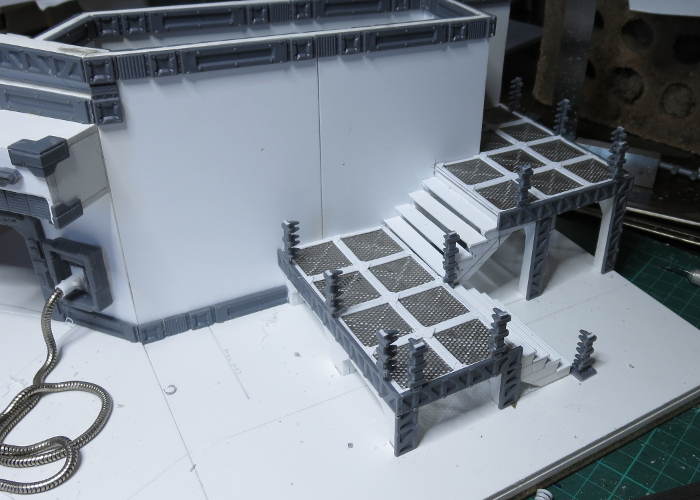 Some final small details:
- I added a spray gun (for vermin control) onto the wall using a chemtech sprayer from the Epirian Scarecrow kit with a pistol grip from a Guardian pistol added. For the mounting clips, I used a couple of leftover sections from the energy fence posts.
- I pillaged a clingfire sprayer and a leg from the Scarecrow kit, and a trimmed down Spider Drone head to create a security remote.
- And I made a billboard screen using sections cut from a garage door. 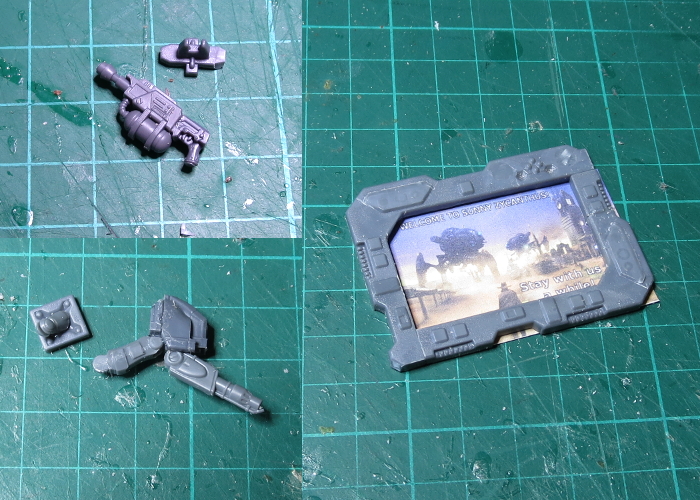 And with that, assembly is more or less complete! 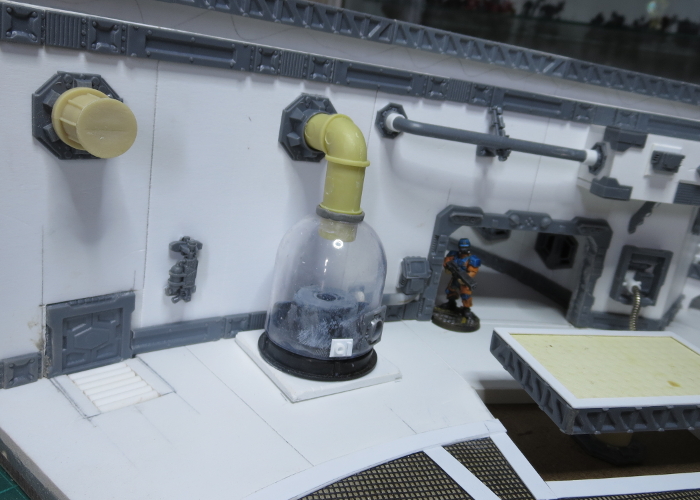 The handrails are just a placeholder for the moment - I'm planning on using 1.6mm aluminium rods for these, so that they can be bent to shape to go down the stairs, but these won't be glued in until the platforms are painted. 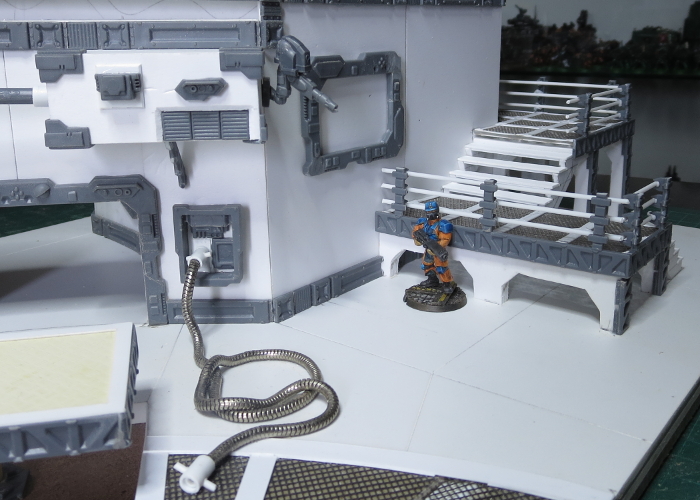 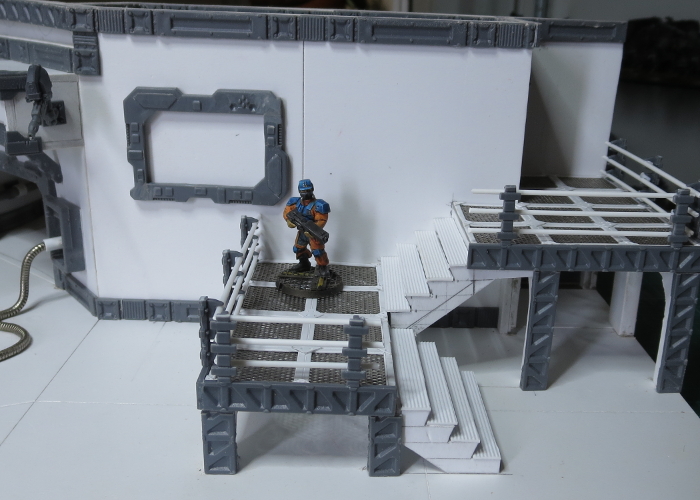 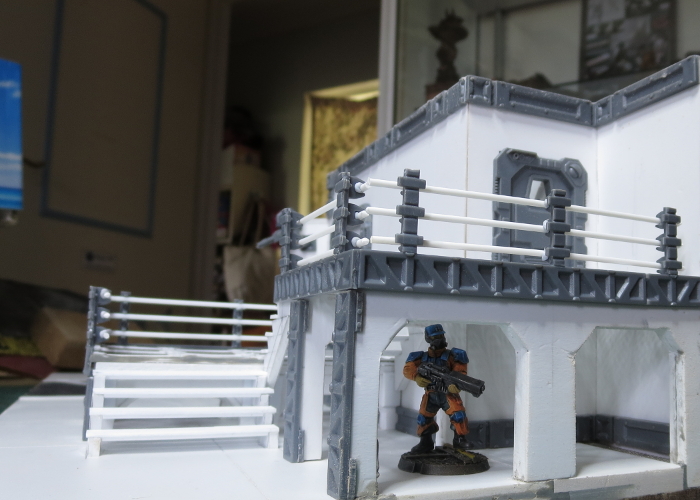 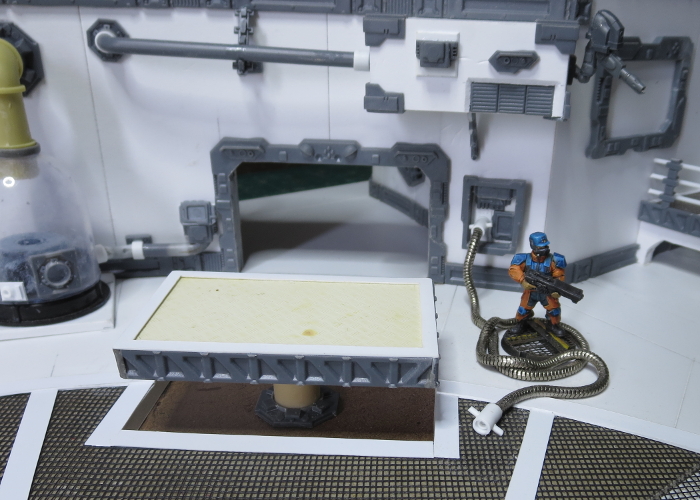 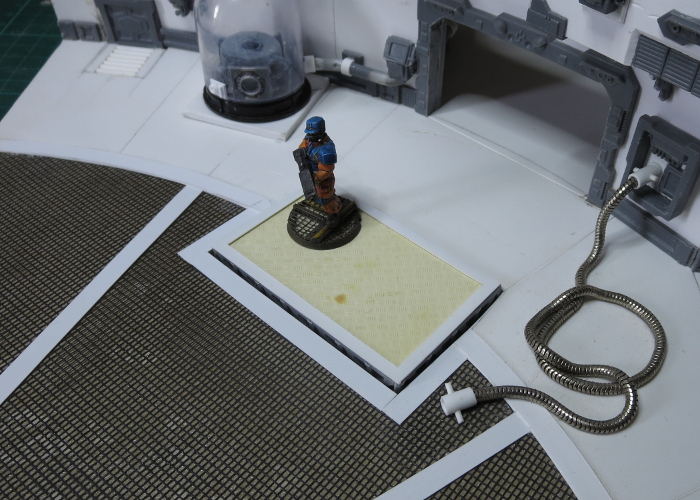 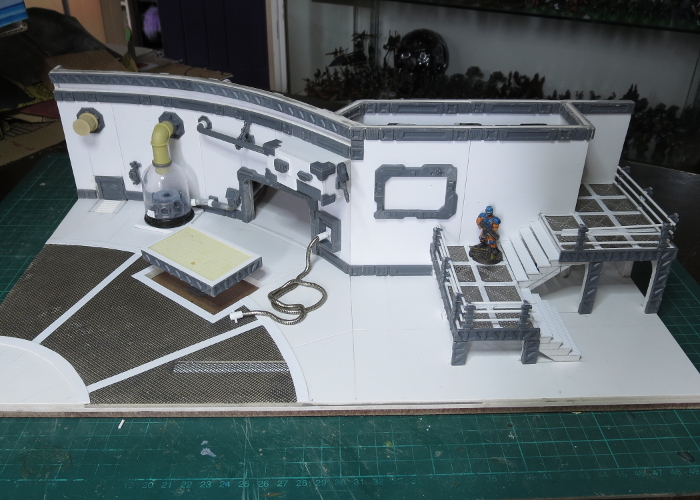 Stay tuned for part three, where we get some paint on this little construction!

You're viewing a weblog entry titled Terrain Spotlight: Landing Pad 16, part 2. If you like this entry you might want to: