Hakoyu Grand Masters are masters of close quarters fighting, lending the experience of decades of training in combat skills and their exquisitely-crafted energy weapons to the Broken Federation's cause. This week, I'm taking a closer look at the model for this fearsome melee veteran. 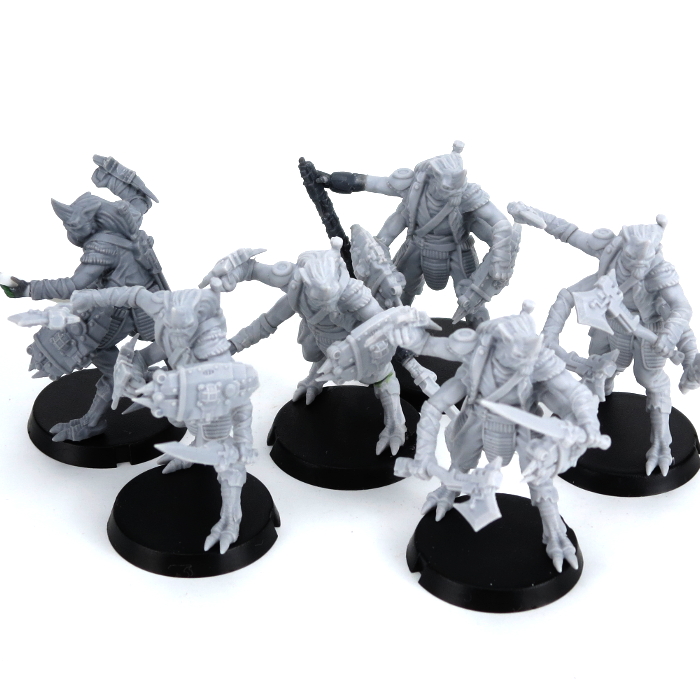 The Hakoyu Grand Master is a multi-part resin model, with the body cast in one piece and all four arms joining at the elbows. Two of the forearms are equipped with the Hakoyu's shields, while the other two hold the Phase Weapons - a sword and an axe. 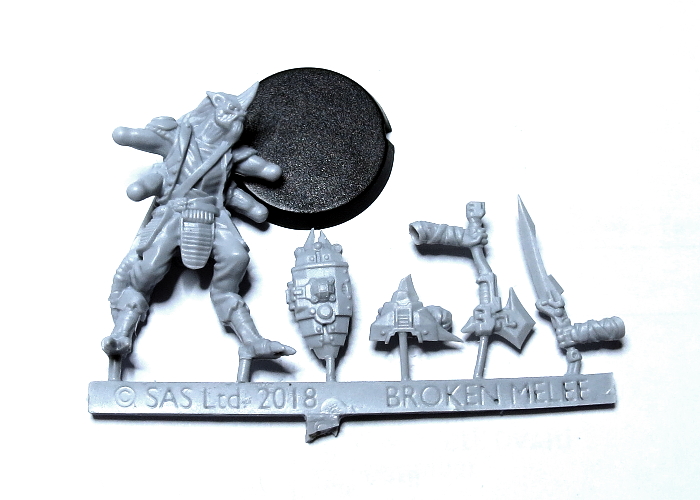 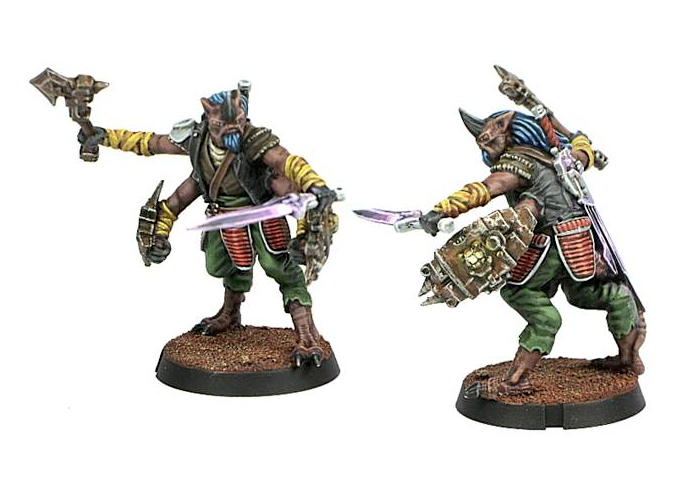 The elbow joint is a ball-and-socket affair, which allows for a decent range of posing, and also allows you to choose where to put each forearm. 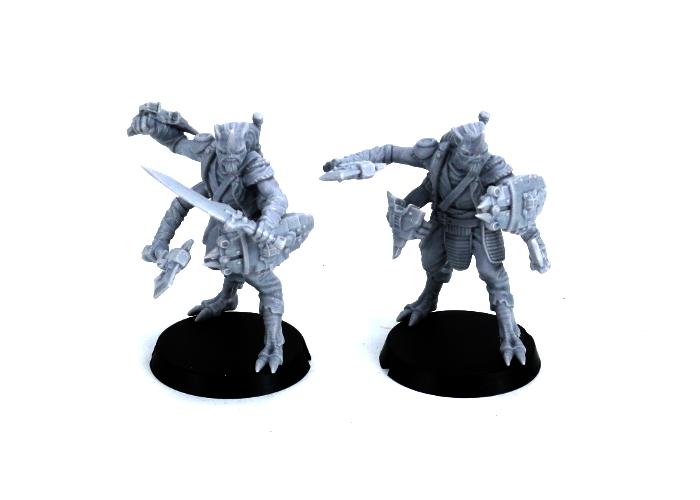 Of course, that also means that you can mix and match arms between models - for the below model, I swapped out the shields in favour of doubling up the weapons. The second axe and sword were switched to the opposite side simply by slicking them off just above the hand and switching them, gluing each weapon onto the hand the other had been removed from. 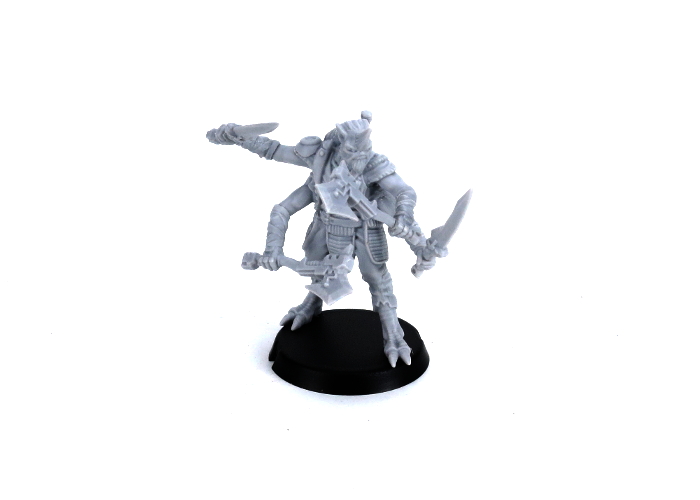 Phase weapons take many forms, at the preference of the individual Grand Master. For this model, I replaced the sword and axe with a double-ended polearm - presumably this Grand Master would be skilled enough with this weapon for it to have the same effect as fighting with two separate blades! The hands were swapped out with plastic hands from the Broken Infantry sprue - as the Hakoyu only has three fingers, I resculpted the fingers on the left hand with a little 'green stuff' putty. The right hand is bionic, so I left it as is - ill-fitting bionics would be just one of the difficulties faced by alien races amongst the often poorly-equipped Broken. 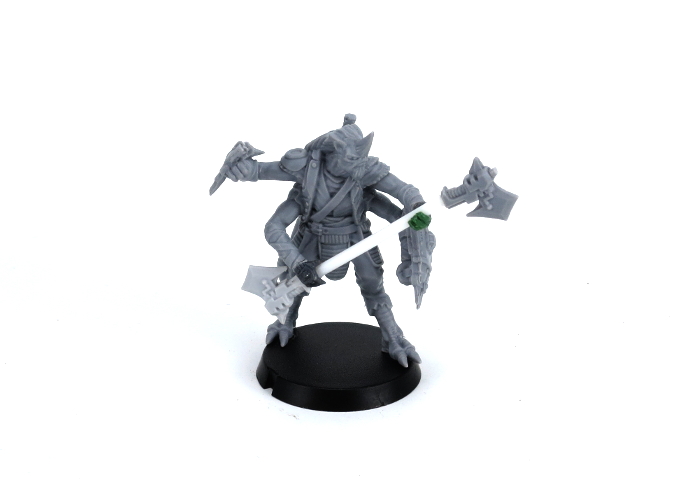 Life on the Edge is hard, and emergency surgery and appropriate bionics are not always available when needed. It would be expected that this might take a toll on veteran Grand Masters, who spend so much of their time in the thick of the fighting. This Grand Master has at some point lost two of his hands, and rather than replacing them with bionics has had his Phase blades strapped directly to his wrists. I also put this model into a slightly more crouched pose, but cutting through the lower knee joint, bending the legs and then filling in the remaining gap with some putty. 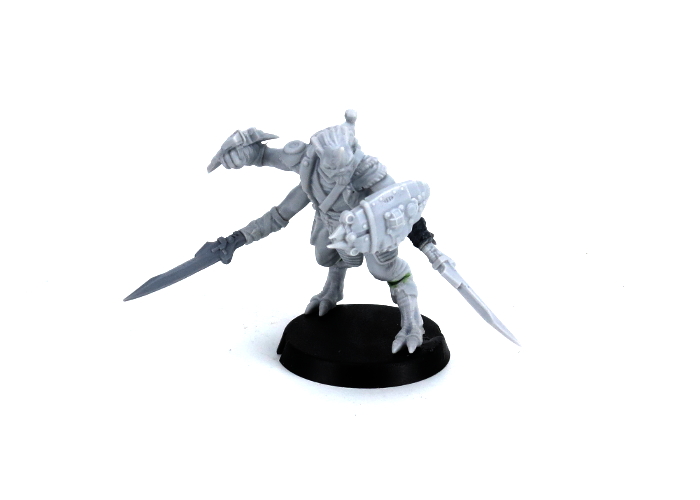 Finally, while known primarily for their fearsome skills in melee, I would expect some Grand Masters to take pride in mastering all aspect of warfare. This Grand Master has eschewed the usual Phase weapons (aside from the one still strapped to his back - you can't turn away completely from tradition, after all!) in favour of a long rifle converted from two slug rifles from the Broken Infantry sprue. The forearm (another bionic) is also taken from the Infantry sprue. I also doubled up the larger of the two shields, but cutting the small shield off the right forearm, and the arm off the large shield, and then gluing them together. 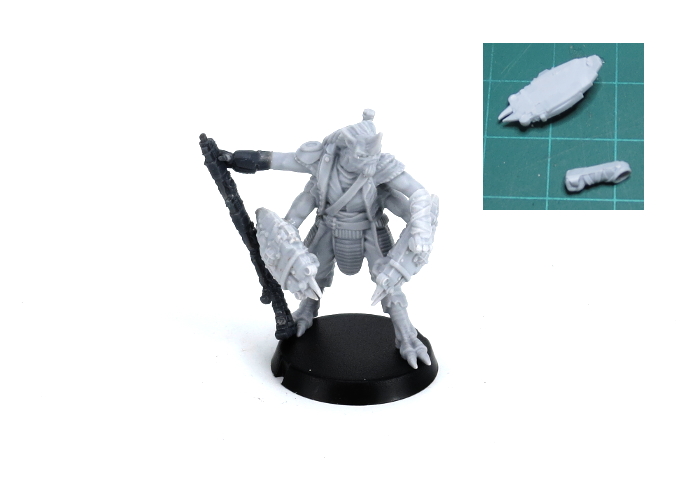 What have you done with your Grand Master? Feel free to pop along and share your work, or ask any Maelstrom's Edge- or hobby-related questions on the Comm Guild Facebook page!

You can pick up the Hakoyu Grand Master along with the rest of the Maelstrom's Edge model range from the webstore here.

You're viewing a weblog entry titled Modeling Spotlight: Hakoyu Grand Masters. If you like this entry you might want to: