Running around is all well and good, but sometimes it's preferable to travel in style. So with that in mind this week I decided to add some extra mobility to my Epirian force in the form of a contractor truck, built from a somewhat neatened-up Games Workshop Ork Squigbuggy. 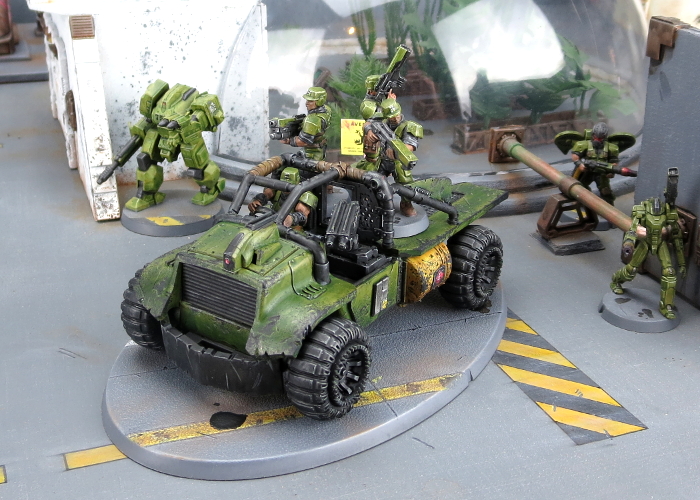 The basic truck chassis was perfect for the look that I wanted, with the main challenge being to remove anything overtly 'orky'. The ramshackle look is great, but not really in keeping with the Epirian aesthetic. And obviously, the ork crew themselves had to go. The only problem there was that the driver's feet are moulded to the pedals. So job number one was to remove those feet with a chisel-blade hobby knife. 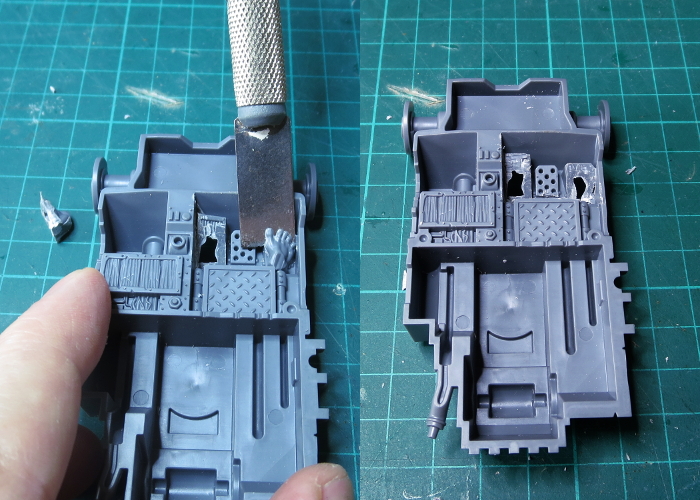 Removing the metal 'teeth' on the front grill was more problematic, so I replaced the grill piece entirely with a new one cut from textured plasticard. 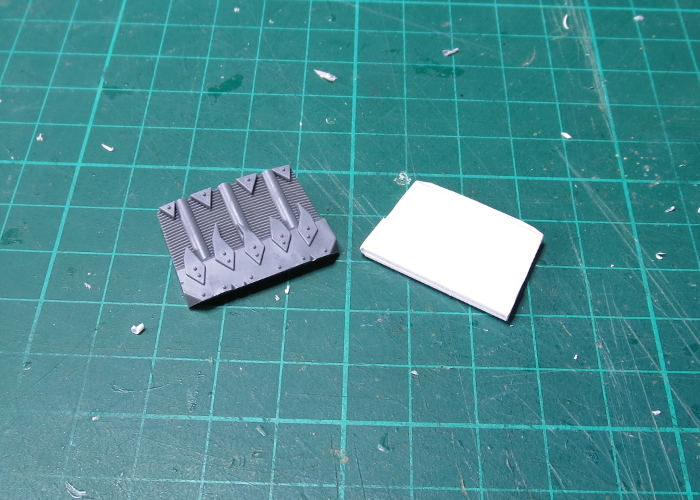 Likewise, there was just too much detail on the rear tray to be easily removed, so I built a new tray out of layered 1mm plasticard, with a centre detail piece cut from plastic mesh. 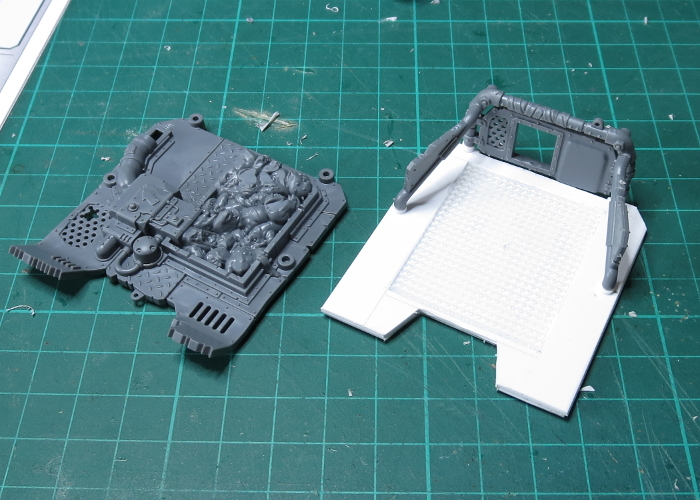 I considered trimming up the doors, but was on a roll with the plasticard by this point, so quickly knocked up two new door panels and added some Epirian badges using tile-texture plasticard. 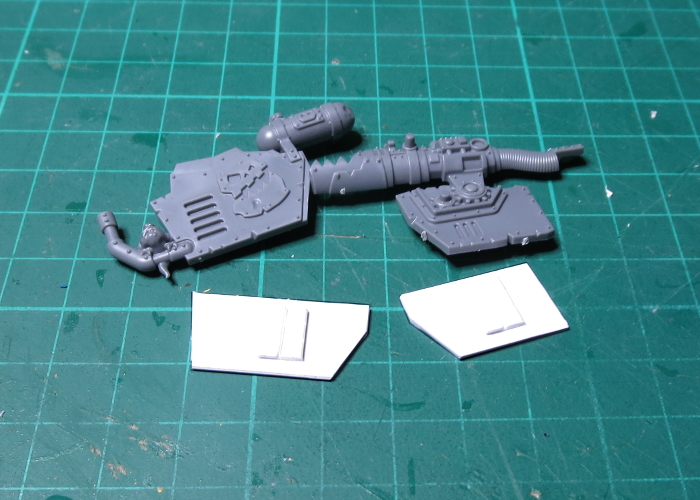 The extra plating on the sides of the front cowling was considerably easier. I cut away anything that didn't belong, and gave the trimmed surfaces a light sand to make sure they were smooth. 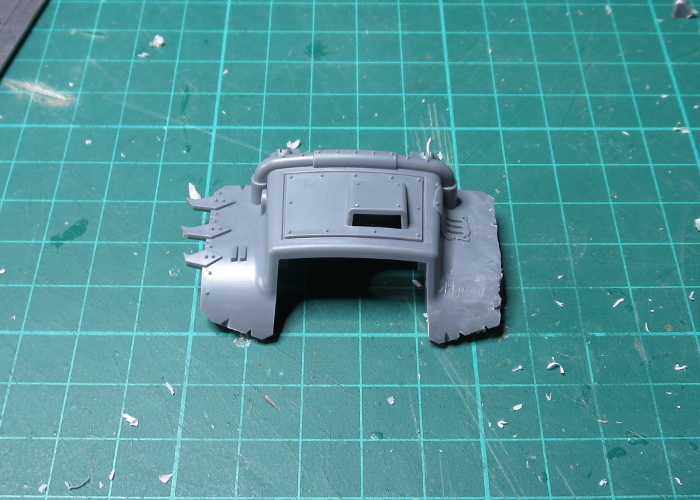 Humans being somewhat smaller than orks, the driver needed a seat added to fit in properly, so I assembled one out of 1mm plasticard and some more of the tile. For the driver himself, I used an Epirian contractor with the legs cut and repositioned. 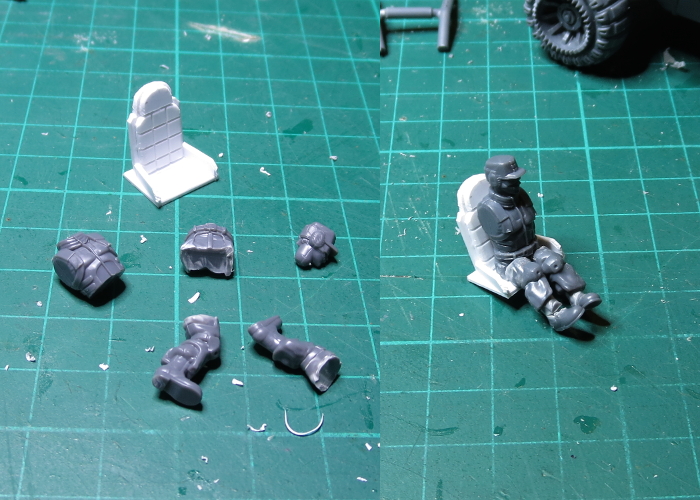 The proportions had worked out all wrong to use the original pedals, so the driver's feet both wound up resting on the middle pedal. I added some pieces of plasticard over the other two to cover up the holes left from cutting off the original driver's feet. 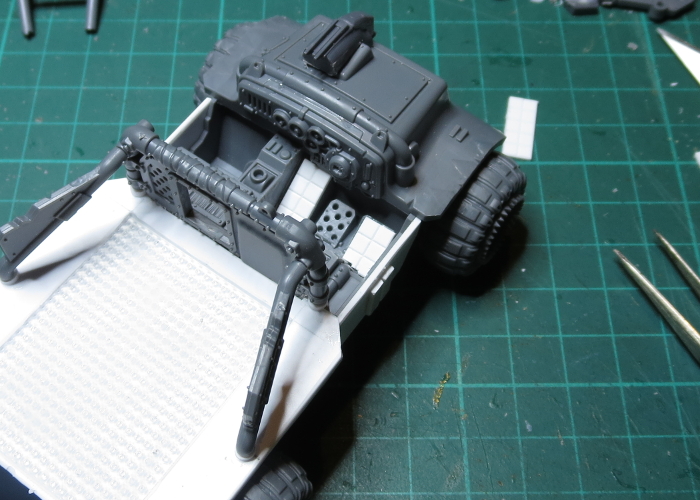 I've been making it a feature of my Epirian conversions to include a drone head, and the intake on the hood seemed like an obvious spot to put one, with a little trimming to make it sit as flush as possible. 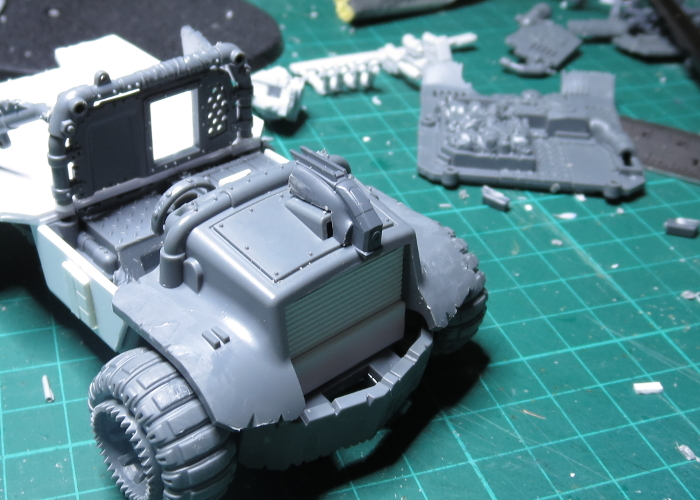 Rather than trying to wedge a second seat into the asymmetrical cabin, I decided to make it a single-seater and add a drone-controlled weapon in the (ahem) shotgun spot. I built this using a few pieces pilfered from the Master Bot Handler and Scarecrow kits, with a base from a Spider Drone leg piece with the actual legs removed. 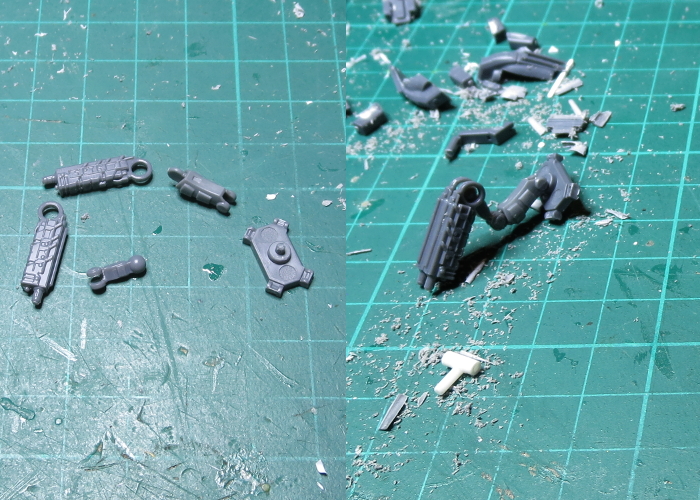 To give the weapon a clear fire arc, I cut apart the roll cage and shortened the crossbar so that it would only extend over the driver's seat. 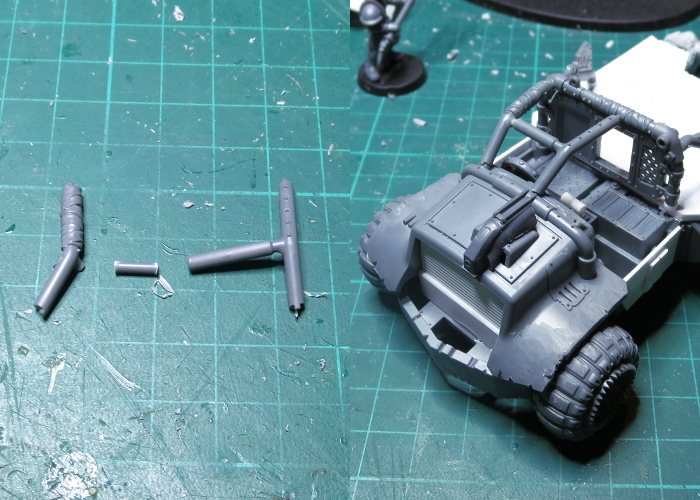 At this point, it was time to putty up any gaps, notably around the base of the drone and the driver's repositioned legs. The roll cage was left unglued for now, and there would be a little more putty filling required once I was ready to put it in place, but this couldn't happen until after I had painted the driver and cabin. (In hindsight, I also should have left the driver separate, as it proved rather difficult to paint him in place!) 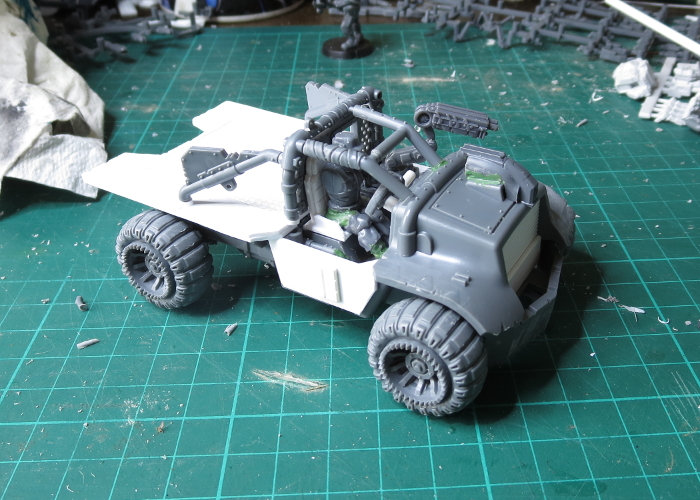 The final step was to add some arms for the driver - I needed some outstretched arms, so wound up using Master Handler arms with Contractor shoulder pads added, and the hands replaced with open contractor hands to grip the steering wheel. And with that, the truck was all set for painting. 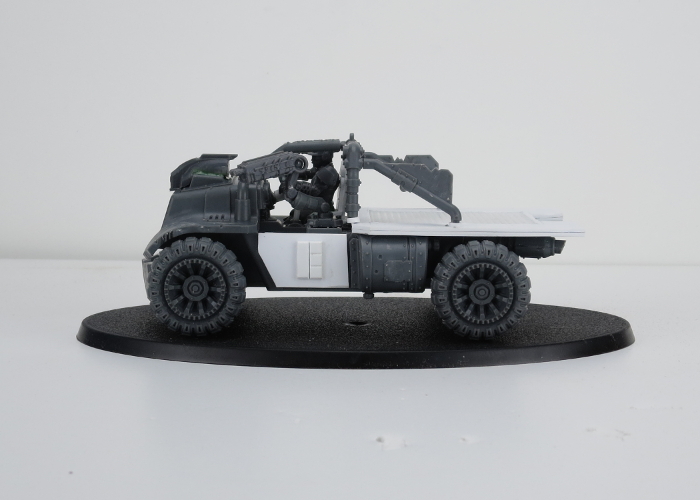 Painting used the same scheme as I have used on my previous green Epirians - Vallejo Yellow Green washed with Army Painter Green Tone, although in this case I spent a little more time layering the ink to create neater shading and highlights. 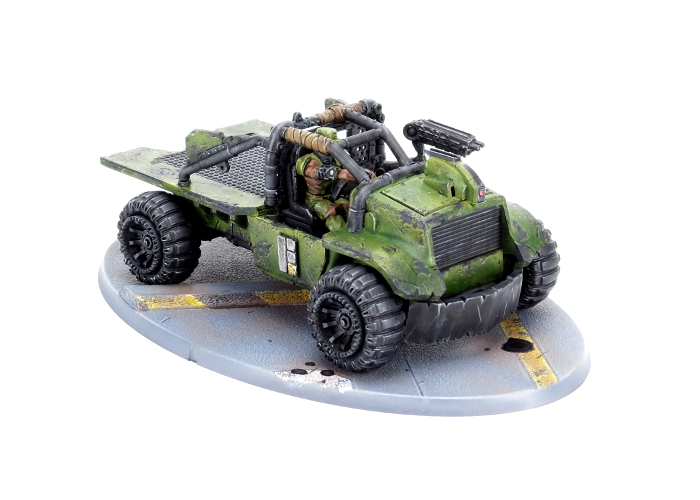 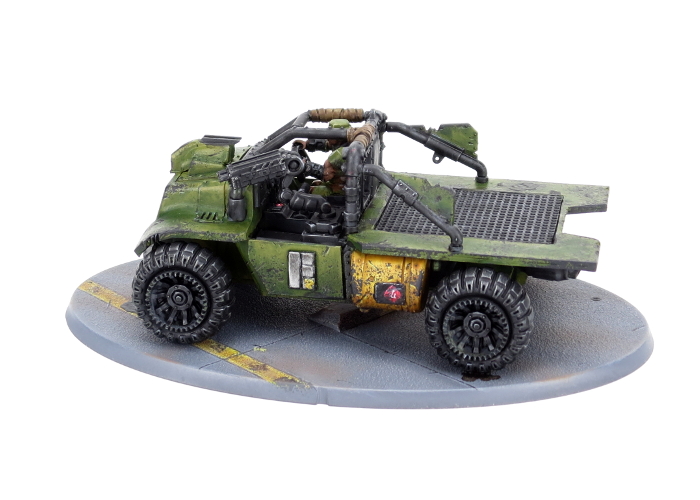 I added damage to the paintwork by sponging with Vallejo Heavy Charcoal and then highlighting the lower edges of the paint chips with yellow green. 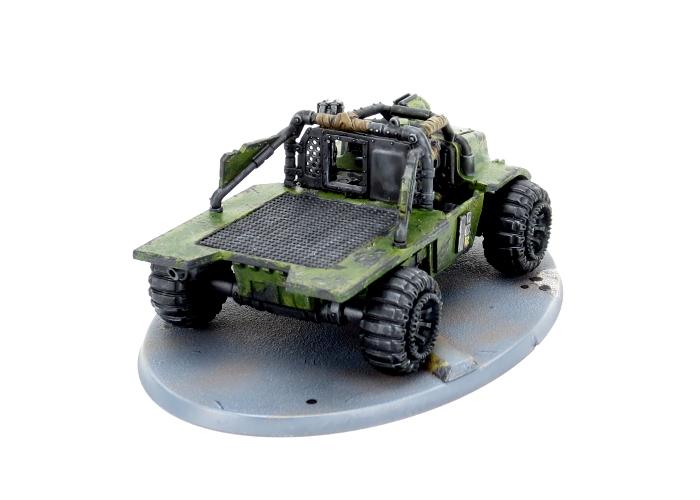 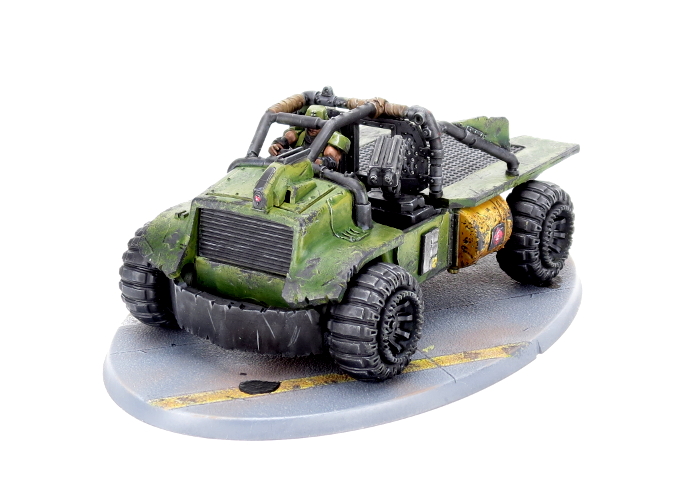 The metal parts were painted with Vallejo Basalt Grey, washed with a coat of Secret Weapon Soft Body Black, and then drybrushed with Vallejo Light Grey. I followed this up with a final wash of Army Painter Dark Tone. 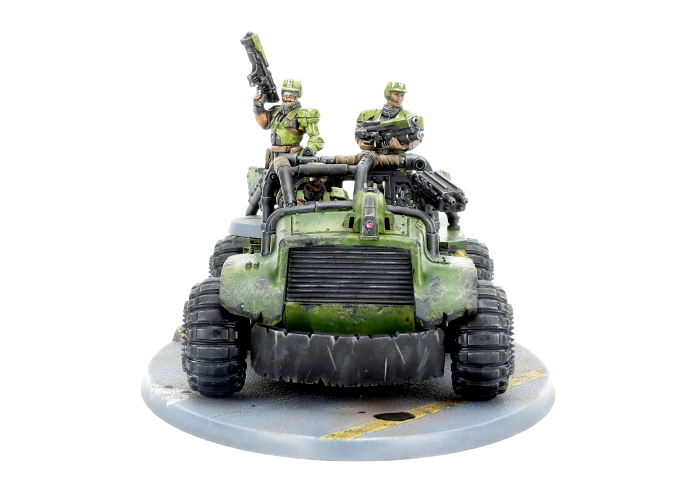 The next step will be to work up a rules card for this thing, probably with some homebrew rules for transporting units to make use of that trayback!

What have you done to personalise your forces? As always feel free to pop along and share your work, or ask any Maelstrom's Edge- or hobby-related questions on the Comm Guild Facebook page!

You can pick them up the Epirian models used here, along with the rest of the Maelstrom's Edge model range from the webstore here.

You're viewing a weblog entry titled Modeling Spotlight: Kitbashed Epirian Contractor Truck. If you like this entry you might want to: