A lot of Epirian tech was originally developed for industrial or agricultural purposes and later modified and adapted for a military role. The Hunter warmech, however, was specifically designed for warfare. I thought it would be fun to see what might happen if the Hunter chassis was retrofitted back to more benign uses, and from that the Mule cargo drone was born. 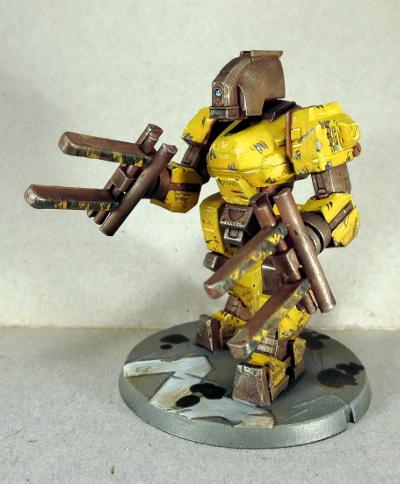 One of the obvious changes is the removal of the integrated processor unit and replacement with a head formed from the core unit of a standard drone. This was intended to reflect the civilian adaptation of the robot, with the more advanced processor unit swapped out for a less robust, less advanced (and likely much cheaper) alternative. I envisage the Mule as being much less autonomous than the Hunter and more limited in function.

Adding a head ran the risk of making the rest of the robot look a little stumpy by comparison to the regular Hunter, and so I started out by bulking up the feet to give the legs the appearance of extra length.

This was done by adding some platforms under the heel and toe of each foot, and adding a kickplate on the front to help tie these into the shape of the foot. I also added some spikes to the heels, which I imagine being rammed into the ground and used to stabilise the robot when it is lifting something tricky. 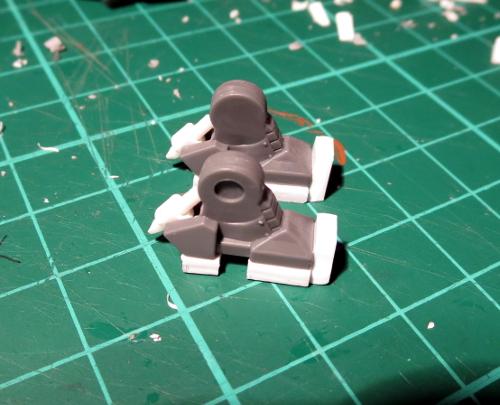 For the head, I carefully removed the Hunter's original head unit with an exacto knife. 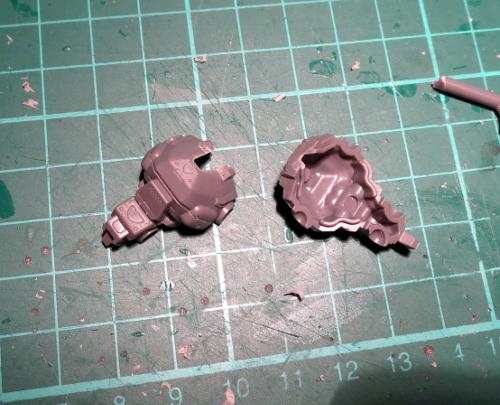 I then trimmed up a T-shaped piece cut from one of the Hunter's sprues to form the neck. This sits nicely inside the front of the torso. 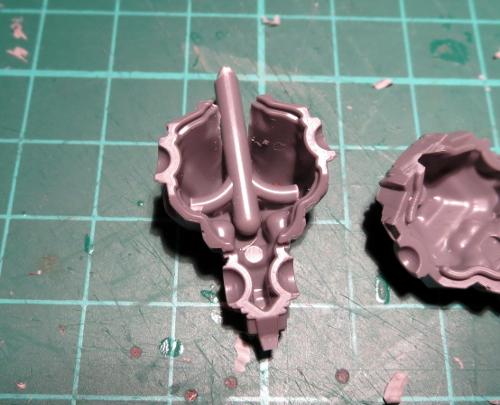 Taking a drone, I cut off all of the extraneous bits, leaving just the central unit. The hole in the bottom for the Firefly flight stem was widened to the width of the neck shaft, and this was then glued in place. 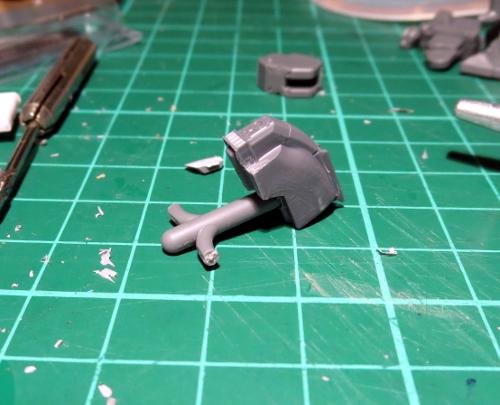 At this point, the legs and torso were all assembled as normal. 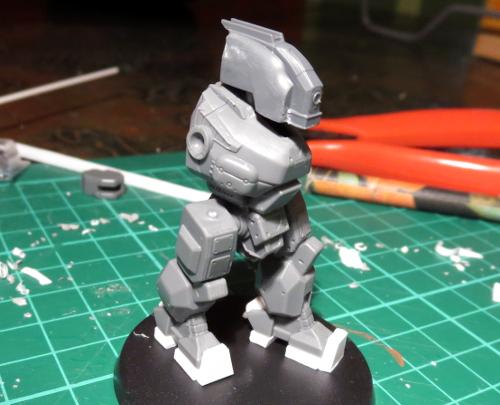 A cargo drone needs lifty arms (yes, that's the offical terminology), and so I took two forearm pieces and cut them off flat on the 'wrist' ends. 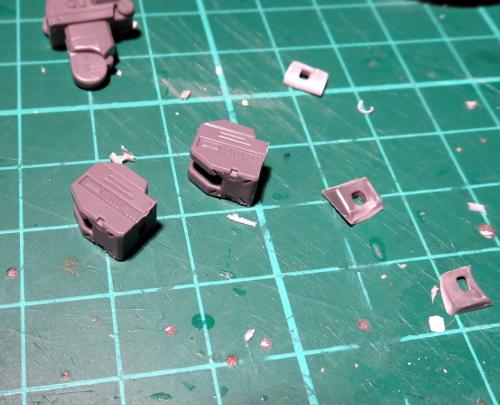 Note: You only get one of these forearm pieces on the Hunter sprue. If you have built another Hunter with a ranged weapon on the left arm instead of the hand, you'll have a forearm piece left over just waiting to be used for something like this.

The parts for the forks were then cut from plasticard and glued together. 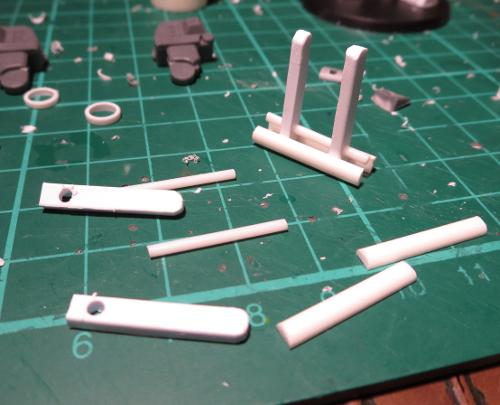 Once the glue on the forks was set they were attached to the forearms with plastic tubing, to create an assembly that looks capable of rotating, for fine control when toting those bales. 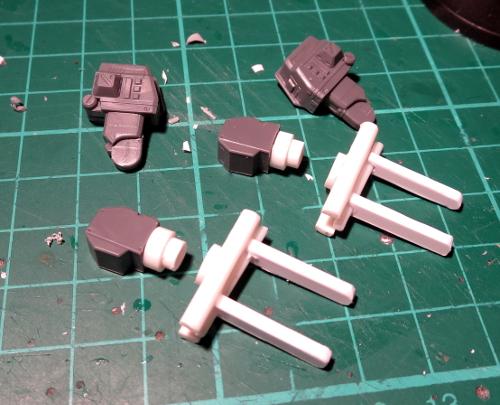 With the arms then glued in place, the Mule looks something like this: 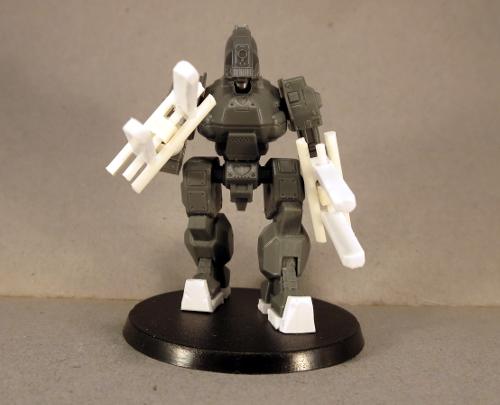 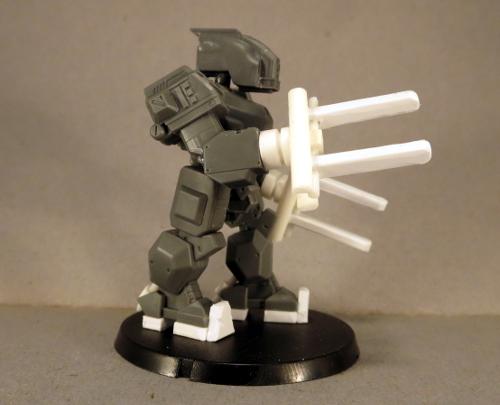 All that's left to do then, of course, is to paint it.

A nice, bright, construction-site yellow was the only possible choice for painting my walking forklift. Metal parts were painted to be battered and weathered, and I added generous amounts of chipping and scratches to the yellow to show that this is a piece of hard-working machinery. 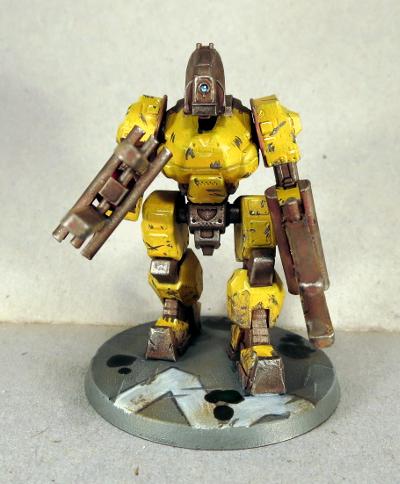 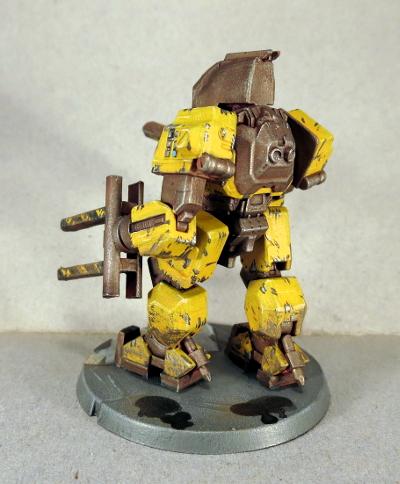 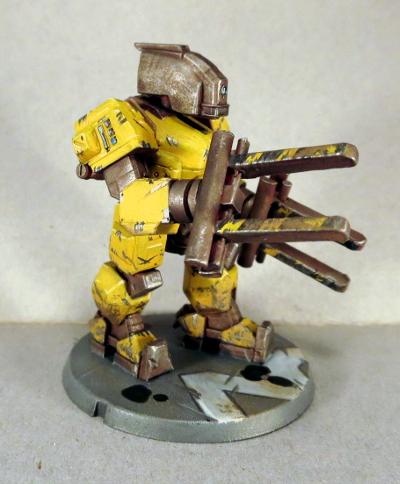 Game-wise, I picture this robot as an upgrade to a Spider drone unit, with minimal combat functionality but the ability to strip Victory Points from objectives at a more rapid rate than normal. It would also be fun to develop the design further and come up with other variants - perhaps a mining drone, an emergency response drone, or a construction unit.

Do you have ideas for your own drone variants? Grab some robot sprues from the Maelstrom's Edge webstore and see what you can come up with! And as always, feel free to share your creations on the Comm Guild Facebook page!

You're viewing a weblog entry titled Conversion Spotlight: Epirian Mule Cargo Drone. If you like this entry you might want to: