The underhive continues to come to life! Previously, I have painted up the watch tower, generator tower, and junction tower. That left me with the trash processing unit and the lift tower to do, and while I'm excited to get some paint on both of these, the lift tower won out this week! 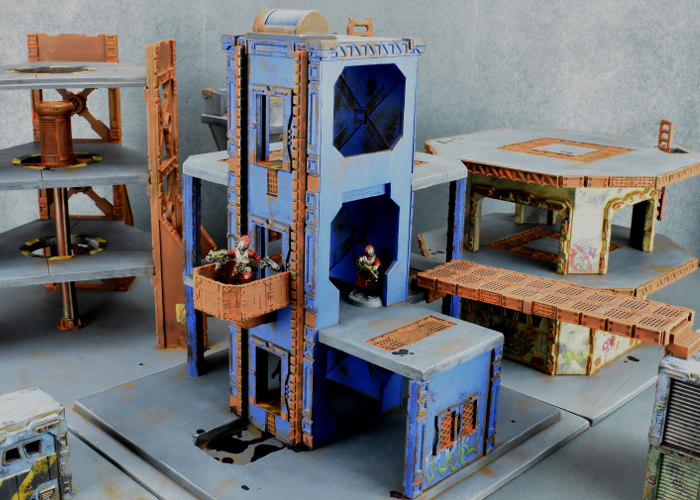 This structure was initially base coated with Army Painter Ultramarine Bluw spray. From there, the process is more or less the same as on the previous structures, and so I started by going back over the exposed metal areas with my brown rust base (a mix of Vallejo Charred Brown and AK Red Brown Leather). Over the blue, vertical surfaces, I applied light streaking using very watered down light grey. There's a little bit of a trick to getting this the perfect consistency, as if it's not watered down quite enough it can either go on too heavy or bead up on the base layer. 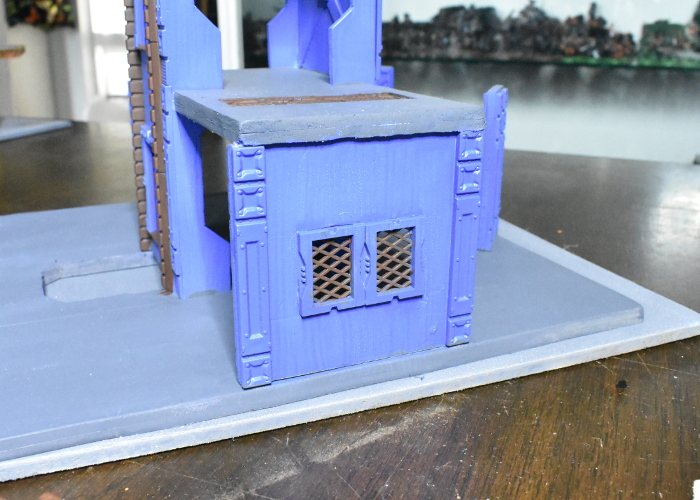 I'm carrying my heavy graffiti theme across to all of the structures wherever possible, and this building was no exception. As before, I sketched in the designs with a fineliner pen, and then coloured them in with assorted paints and inks. I haven't been getting too carried away with hazard striping so far, but thought this building warranted some on the lift doors. I printed out some appropriately sized strips and glued them into place on the bottoms of the door frames. Time for weathering! I sponged Vallejo Basalt Grey over the wall panels, and dark brown over the blue-painted metal sections. The grey is much more subtle against the blue than on the previous structure, but it still does the job - if nothing else, it helps to fade the blue down a bit so it's not so eye-catchingly bright. I also drybrushed light grey over the floor sections, and light orange over the rusted metal parts. From there, I pulled out the Beasty Brown to drybrush some dirt into the nooks and crannies and raised sections. I stopped at this point to grab some pics of the graffiti, with weathering in place. Then it was on to the final rust layer. I applied a generous layer of Army Painter Dry Rust to the rusted metal areas by dabbing it on roughly with an old brush. From there, I just had to glue the floors in place and apply a few final details like the generator coils and the lift control panels, and the job was done. Next week: The Trash Processing Unit!

You're viewing a weblog entry titled Terrain Spotlight: Painting the Underhive, part 4. If you like this entry you might want to: