Apparently even when I'm looking for something else completely, the terrain bug is difficult to avoid. On a completely unrelated trip through the hardware store for a change, I came across a rack of plastic air conditioner ducting that included a bunch of pieces that immediately jumped out as potential building fodder. Before you could say 'Get to the bunker!' I was on my way home with fingers just itching to break out the tools. The end result was a brand new ground-level access for a bunker complex! 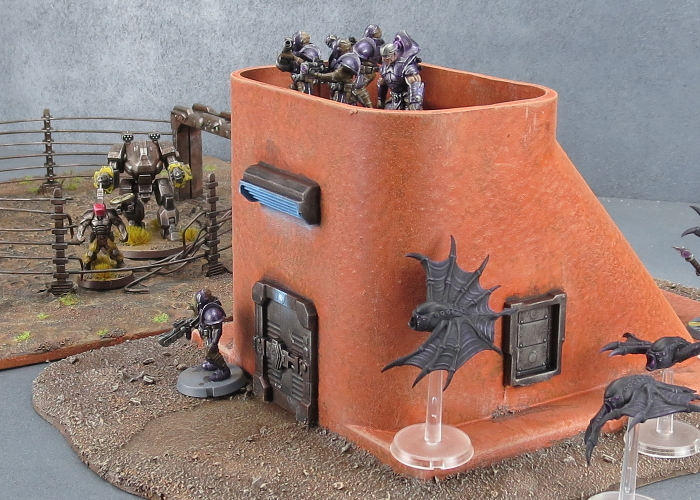 The piece that I chose started out life as a 100mm ceiling cap, which is apparently something to do with air conditioners - I'm taking the word of the label for that! I love the idea of buildings that serve as an entryway to larger complexes below ground, and the shape of this fitting looked perfect for an atrium bunker leading to a staircase or angled lift shaft. 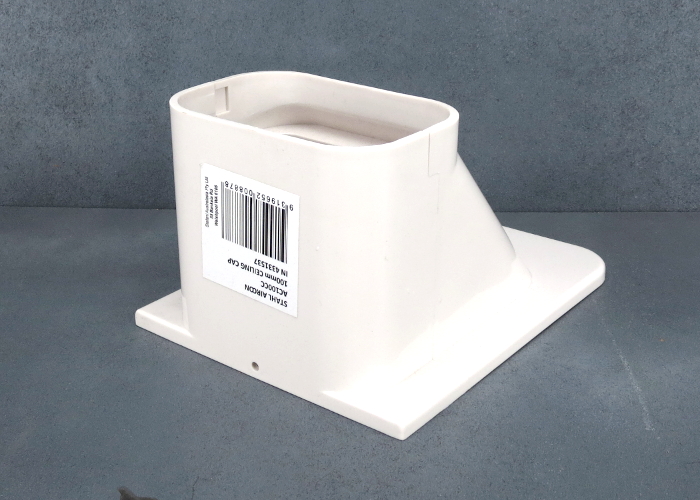 As the type of plastic used was shiny and of indeterminate pedigree, I started out by removing the label and giving the whole thing a light sand with fine grade sandpaper to remove the glossy outer layer. This helps the glue and paint to stick later. 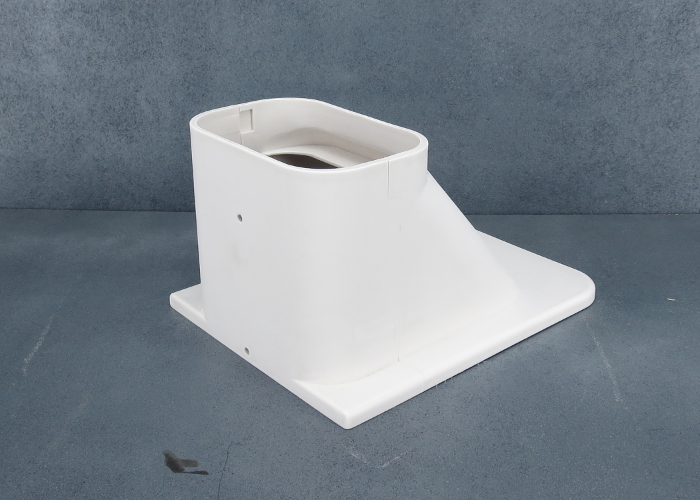 The fitting is made of two separate pieces that clip together along the sides, which made cutting window holes a little easier - I popped the pieces apart, and used a shutter window from the Maelstrom's Edge terrain sprue to trace around for the hole, with one vertical edge running along the seam. Then I cut along the top and bottom of the marked hole with a razor saw, and scored the other vertical side and snapped the resultant scrap piece out of the hole. This was repeated on the other side, and again on the front for a door hole, using the armoured door from the terrain sprue as a guide. 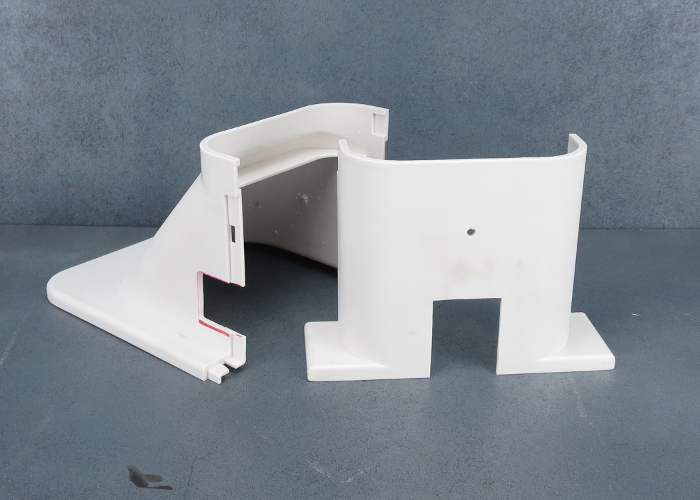 I glued the windows and door in place using an 'all plastic' glue combo (a two-part setup that includes a tube of superglue and a 'primer' pen that is used first to help the glue stick to unusual plastics). I also added a strip light above the door for a little extra visual detail, and to cover over the screw hole that was there. 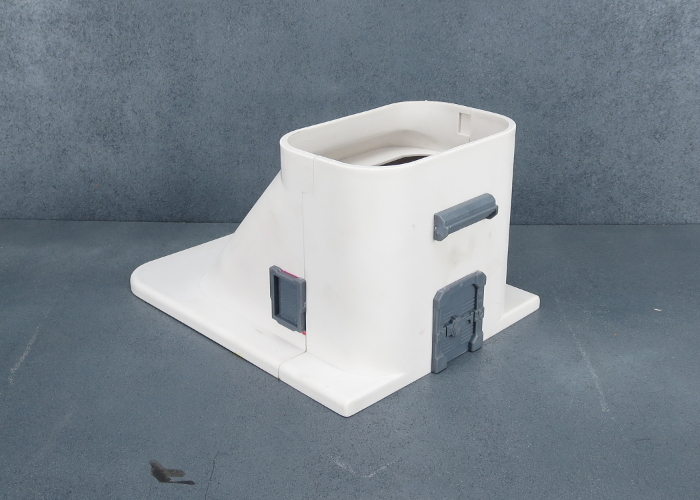 To fill in the roof, I cut two pieces of 2mm foamed PVC to the right shape to fit in the cavity. In one of these I cut a square hole for the hatch from the terrain sprue. The two pieces of PVC were then superglued together, and the hatch glued into the hole. 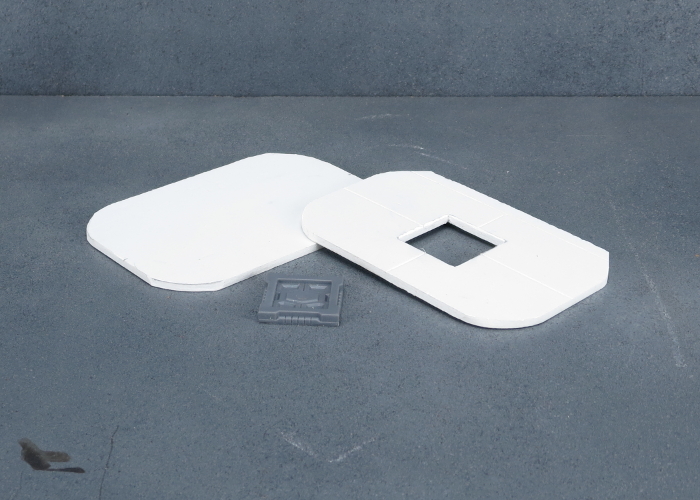 The fitting has a couple of handy ridges running around in the top cavity at a perfect height to form a balcony once the PVC section was glued and dropped in to sit on them. At this point I also glued the structure down onto a piece of masonite cut to an appropriate size and shape, and filled in the seam on the fitting with a little putty. 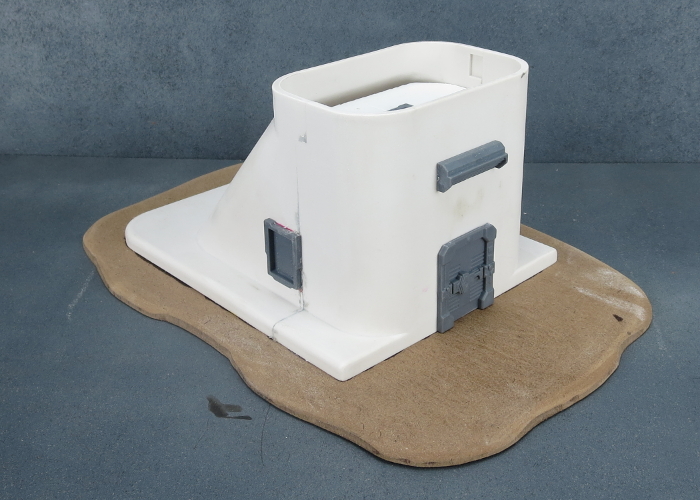 To paint, I started out with a coat of Rustoleum brown primer. 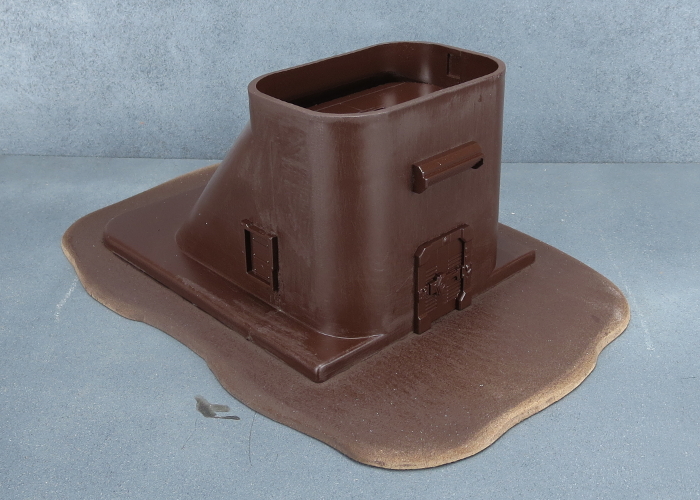 I wanted some light texture over the non-metal parts of the bunker. For this, I used a terracotta paint found in the paint section at my hardware store. This is generally used on plastic plant pots to make them look like they're made of terracotta, and has a really fine grit mixed through it to give it a sandy feel. I used a large brush and dabbed this on rather than brushing, to avoid brushstrokes showing up when I drybrushed over it. 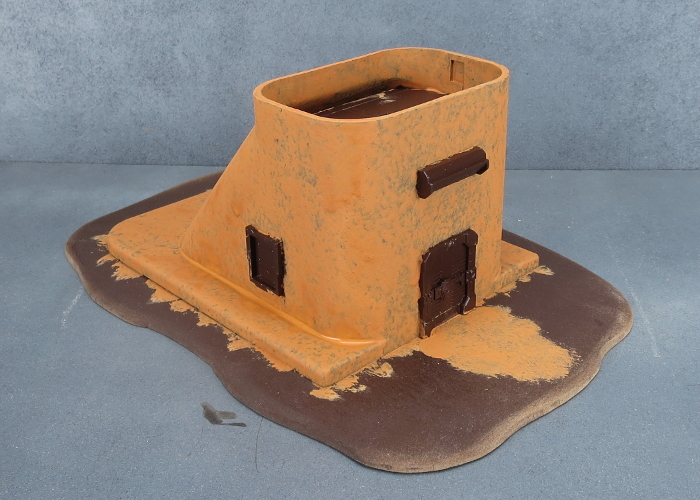 The terracotta coat was a little patchy when it dried, with the dark brown basecoat showing through a bit darker than I wanted, so I went over it with a coat of Burnt Sienna craft paint. While that was drying, I also went over the base with a generous layer of PVA glue and sprinkled on a coarse sand and gravel mix. 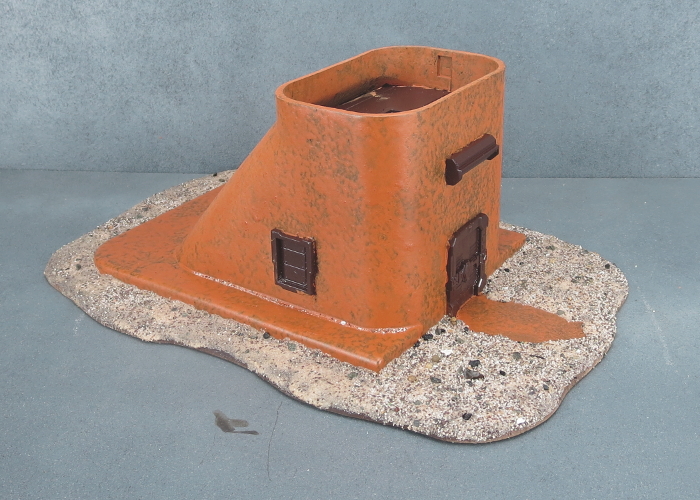 The bunker was then drybrushed with a mix of Burnt Sienna and a taupe colour (actually called 'Fawn' on the bottle). The metal parts were given a heavy drybrush with P3 Pig Iron and then a generous wash with Army Painter Dark Tone, and the base was painted with a dark brown (Burnt Umber) craft paint. 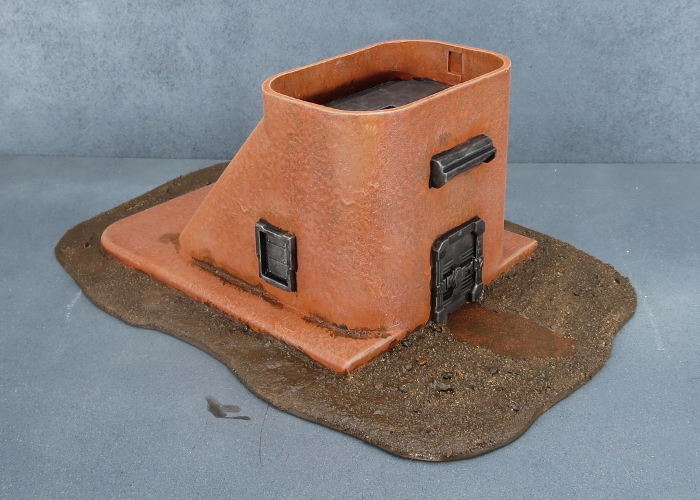 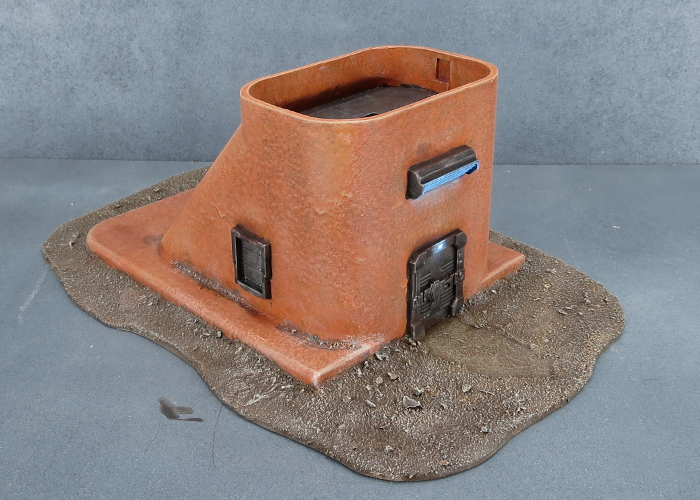 I also added a building number on the back slope, using a stencil printed out on paper and cut out with a hobby knife. I dabbed on Vallejo Light Grey with a large brush, and then a layer of white, trying not to make it too neat so that it would look a little weather-worn. 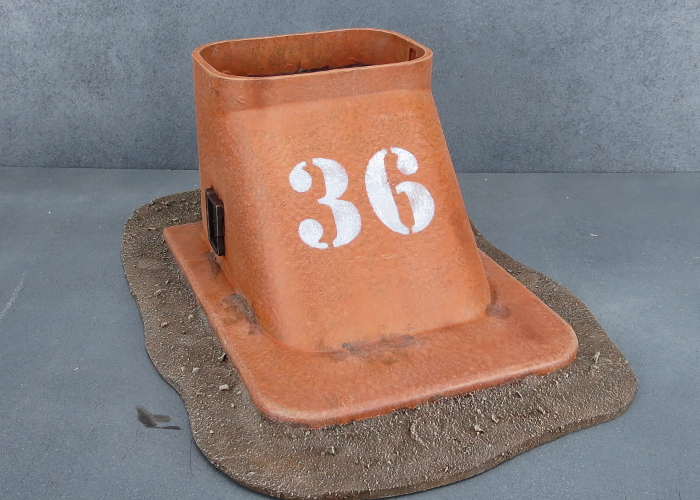 A shot of the roof: 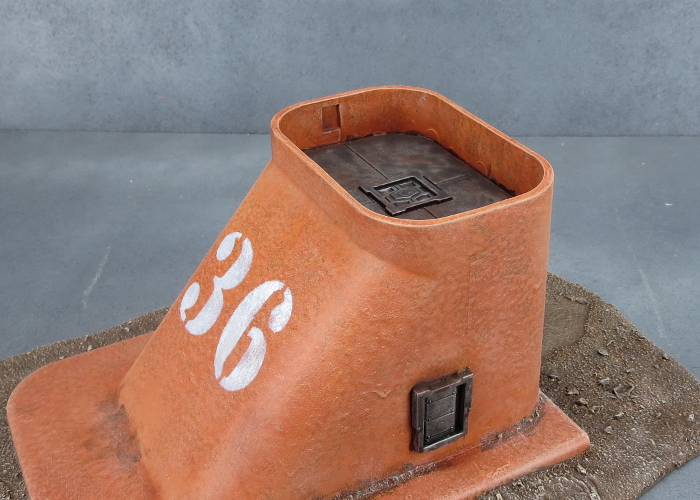 And that's it - ready for the table!

You're viewing a weblog entry titled Terrain Spotlight: Bunker from an Air Conditioner Fitting. If you like this entry you might want to: