If you've been following my articles for any length of time, you may have noticed that I like using lots of ink washes in my painting. Washes are a great way of quickly adding shading to a model, and so are an invaluable tool if you want to get your models painted speedily and easily. So when the new Citadel Contrast paints came out this month, I couldn't resist taking them for a spin to see what they could do. I specifically wanted to try out a bright red and a yellow, as these are shades that weren't already covered well by my existing collection of washes, and so dug out a Militus Battlesuit from the to-be-painted pile that seemed like a good candidate for the experiment. 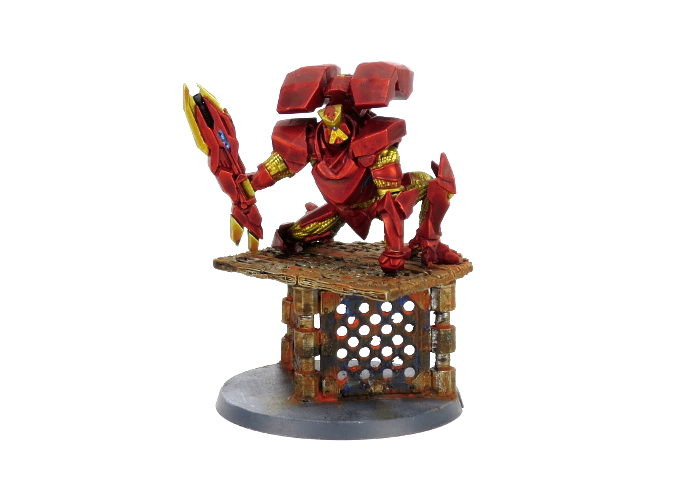 The model I chose to paint up was one of the conversions featured in the Militus conversion spotlight article from back in April. This is a mostly-stock model, with a little trimming on the leg joints to allow more of a crouched pose than is otherwise available to the kit. 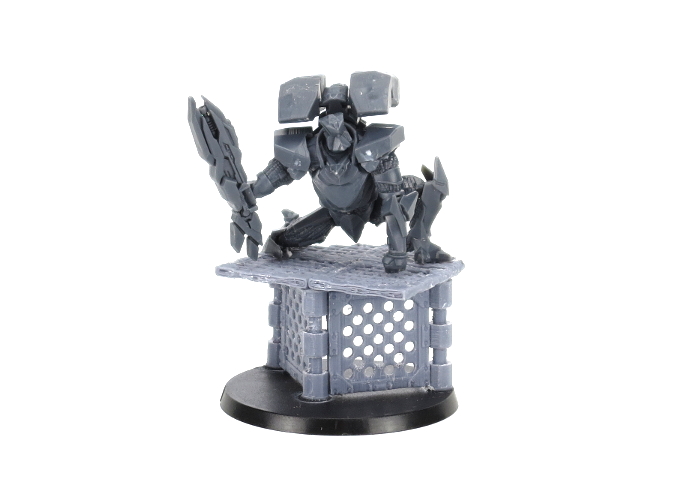 There are a range of specific basecoat sprays available for the Contrast range, but working on the assumption that following instructions never got anyone anywhere interesting, I chose to use Army Painter Plate Metal spray as a base instead. 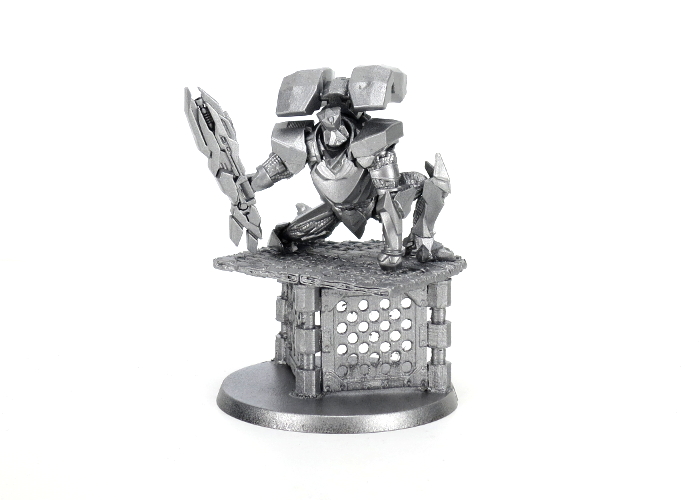 Red inks tend to give a richer colour over gold than silver, but that worked into the overall plan. I started out by giving the whole model a generous coat of Iyanden Yellow. 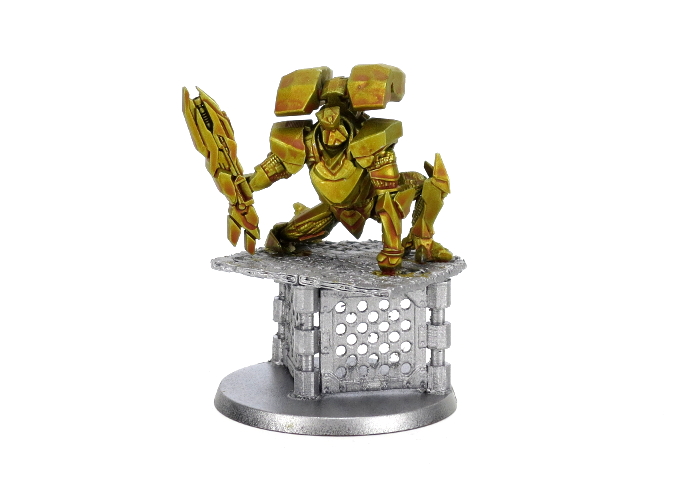 After leaving that to fully dry, I went back over the armour plating with Blood Angels Red, leaving the yellow on the suit's mechanical underlayer and a few other strategic spots. 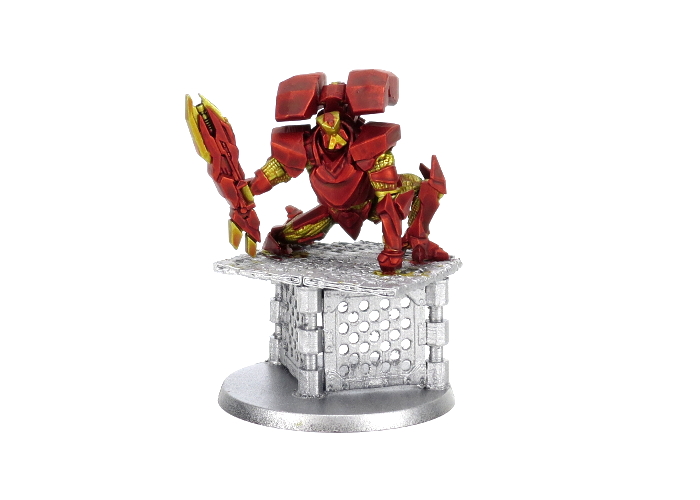 And just like that, the model was 90% finished. I finished up by adding in some blue detailing on the weapon, chest, boostpack exhaust and helmet eye-lens, and some dark grey on the incursion rifle barrel. I also painted up the metal grating base structure with some Macragge Blue on the vertical panels, and then some Army Painter Strong Tone and Dry Rust over the whole thing. Finally, the base itself was painted with Vallejo Basalt Grey, drybrushed with Vallejo Light Grey and Beasy Brown, and given a few nicks and scratches with black and some more light grey. 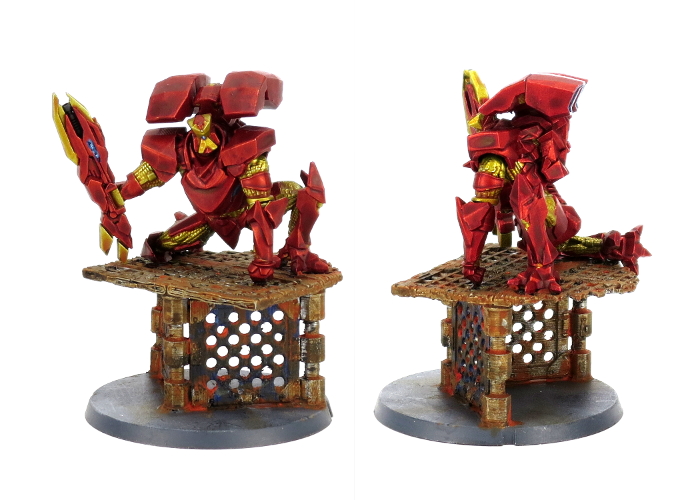 As with any ink-painting technique, the end result is not perfectly neat, but what it lacks in accuracy it makes up for in speed. Although if you wanted to spend some more time on it, it should be possible to get neater shading by applying multiple, light coats - This won't be as subtle, or as suitable for paler colours as when done with Army Painter Quickshades, due to the Contrast paints being so much more heavily pigmented, but it should still work ok for darker shades. I'll be testing that theory in a later article. 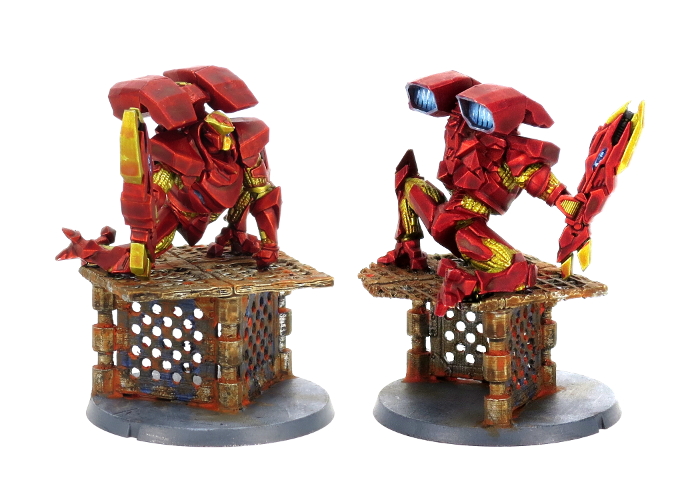 If you're feeling inspired, you can pick up the Militus kit, along with the rest of the Maelstrom's Edge model range in the webstore here.

You're viewing a weblog entry titled Painting Spotlight: Remnant Militus Suit with Contrast Paints. If you like this entry you might want to: