I picked up three of the new Citadel Contrast paints to have a play with when they were released - a yellow, orange and red. This was partly just from curiosity as to how they worked, and partly hoping to plug the colour gaps not filled by the other washes (mostly Army Painter) in my current paint collection. I showed off my initial dabblings a few weeks back, with a metallic red and yellow Militus battlesuit (here, if you missed it), using the Contrast as intended, but with the orange I wanted to see of these paints could be used for a thinner, layering style instead of just glopping it on and hoping for the best. So I broke out another Militus suit, and wound up with this: 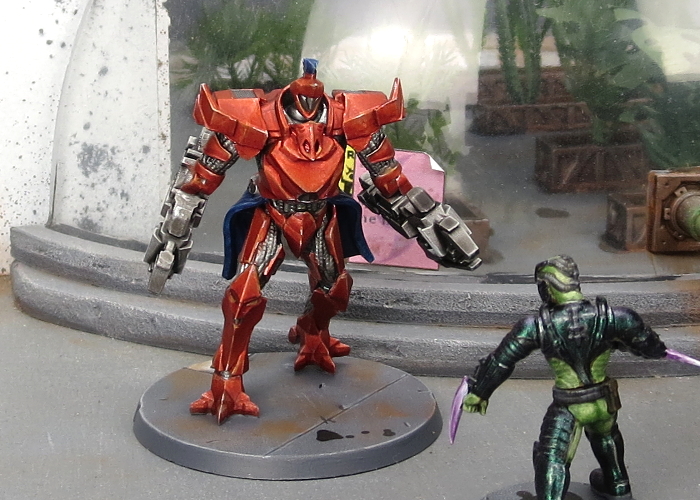 The model I started with was a Militus suit that I had slightly converted by adding some spare knee wings to the shoulder pads and a flappy cape sort of thing hanging from his belt that was taken from the Karist Kaddar Nova kit. 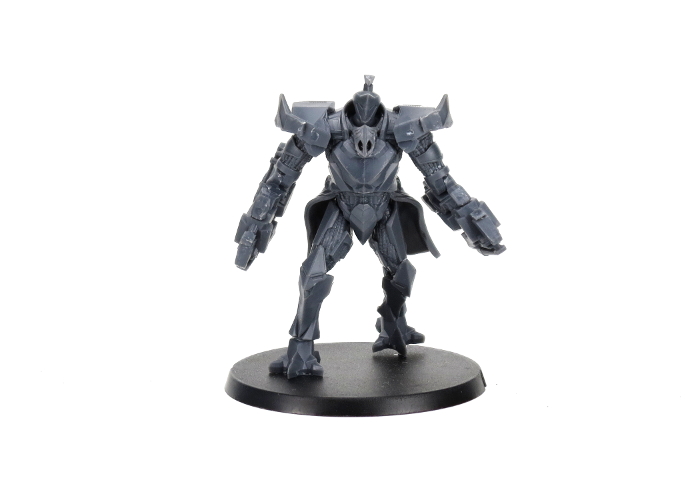 As with the previous suit, I started out with a basecoat of Army Painter Plate Metal spray. 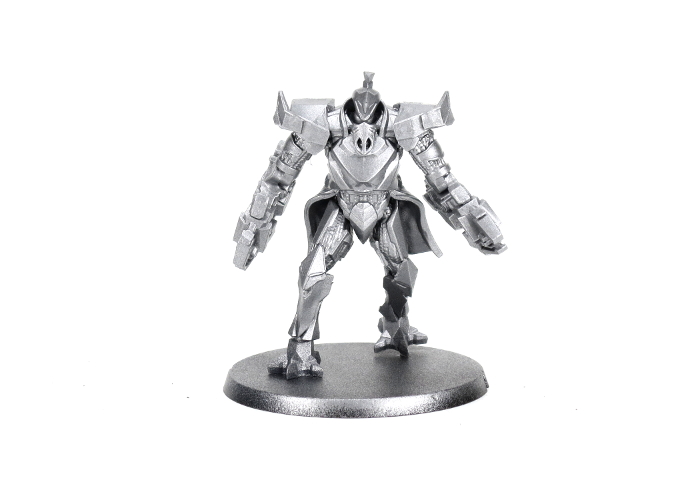 Over the mechanical undersuit parts and the arm-mounted conflagration launchers, I painted a layer of Army Painter Dark Tone. 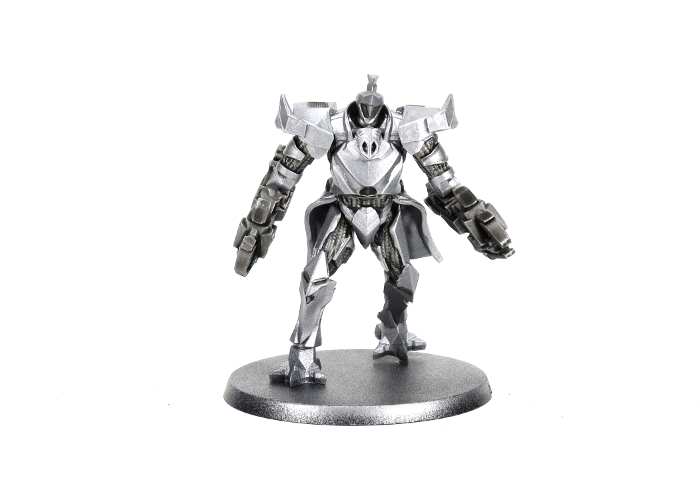 When that was dry, I gave the rest of the armour a light coat of Gryph-Hound Orange, keeping it thin enough that it didn't pool. This looked a bit scrappy, but that's ok for now. 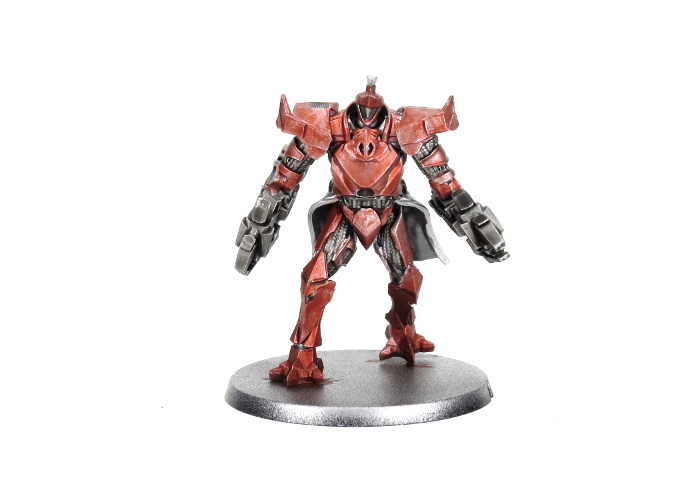 I then started building up the orange with successive, light layers. These layers slowly work back from raised edge, building up heavier colour in creases, lower edges of plates and other shaded areas. Once the orange was about as dark as I thought it was going to get, I used a little Blood Angels Red to add some extra shading. 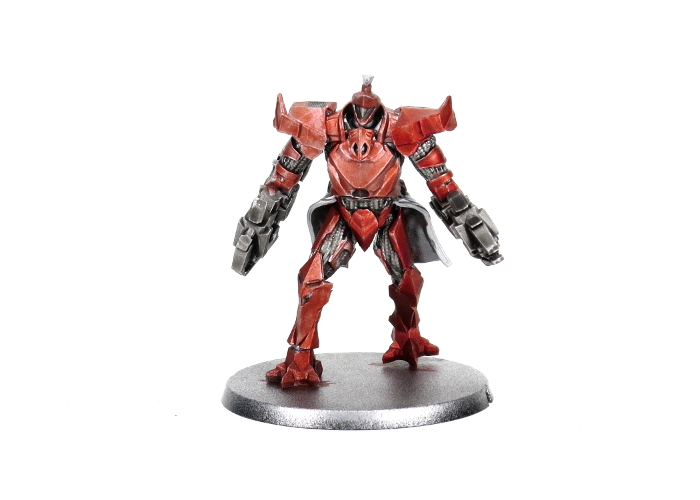 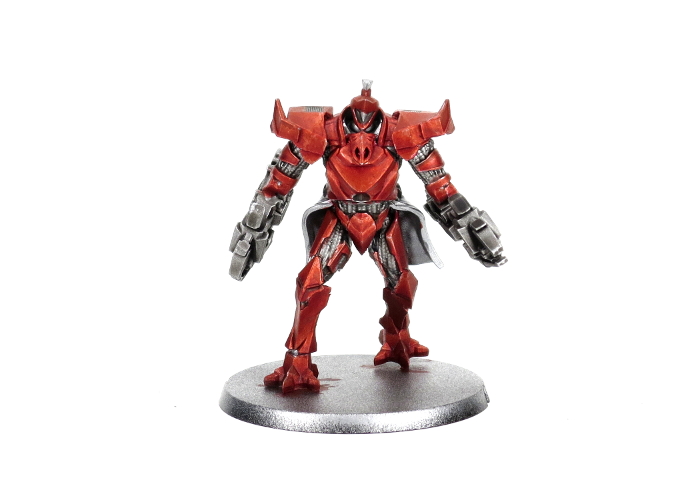 Once I was finished with the Contrast layers, I painted the helmet crest and the cape with Citadel Macragge Blue, and the eyes, inner strip details on the cape and some detail on the sides of the guns with Army Painter Ash Grey. I also basecoated the base with Vallejo Basalt Grey. 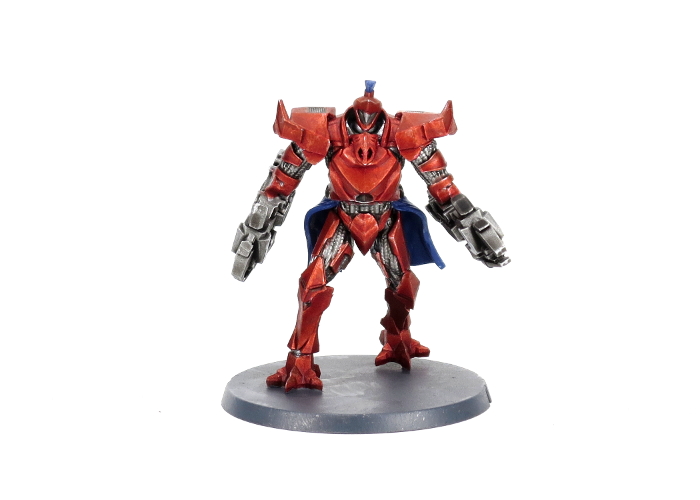 To finish up, I gave the blue a light drybrush with some old Citadel Ice Blue to pick up the detail and then washed it with a generous coat of Army Painter Blue Tone. Over the Ash Grey I added a highlight of white, and then I went over the raised edges of the armour with some Coat D'Arms Fiery Orange, with a final spot highlight of white wherever it seemed appropriate. The base was finished off with a drybrush of Vallejo Light Grey and my usual 'urban' detailing. 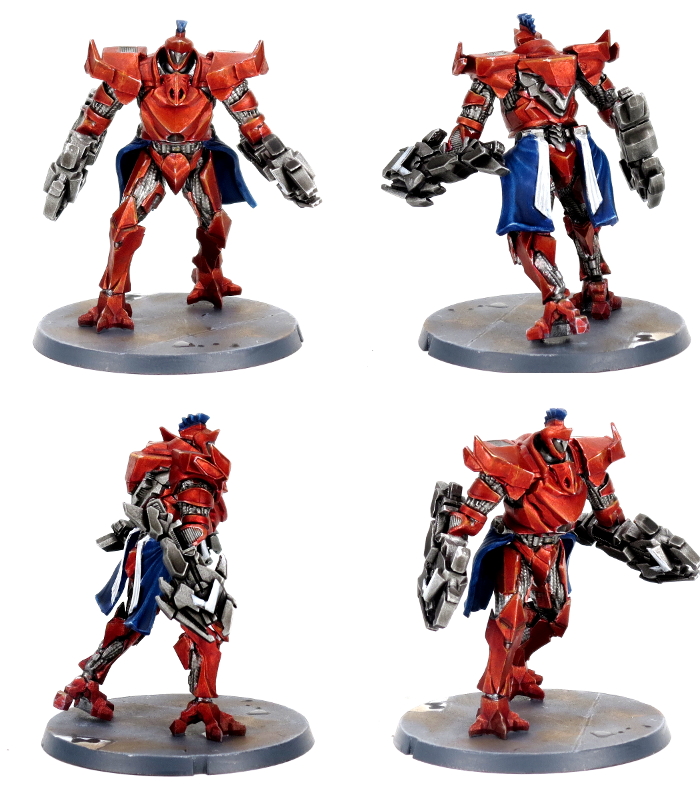 Some final thoughts: Over the Plate Metal basecoat, the orange wound up more of a coppery brown. I don't dislike the colour, but a white or cream base would be needed for more of an 'orange' orange. I also found that the red faded considerably as it dried, so the final level of contrast on the armour plates isn't as high as I had intended. Some over-compensation would clearly be required when shading this way with the Contrast paints in this way.

Another minor issue is that the Contrast rubbed off on raised edges really easily with handling during painting. I had heard that the Contrast paints were a little more fragile than regular acrylics, and are best sealed for handling, and this would seem to be made worse by the thinner coats used here. A light coat of sealer between layers now and then would probably be a good idea for keeping the paint intact while working, although I'm not sure how the Contrast goes over sealer.

Overall, though, the process seems to work, it just needs some refining as the Contrast behaves quite differently to the Army Painter Quickshades that I usually use for this sort of method. 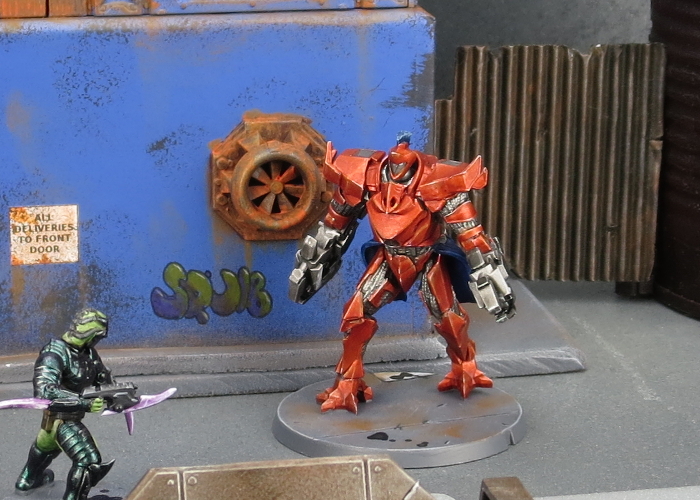 You can pick up the Militus battlesuit, along with the rest of the Maelstrom's Edge model range in the webstore here.

You're viewing a weblog entry titled Painting Spotlight: Militus Battlesuit painted with layered Contrast paint.. If you like this entry you might want to: