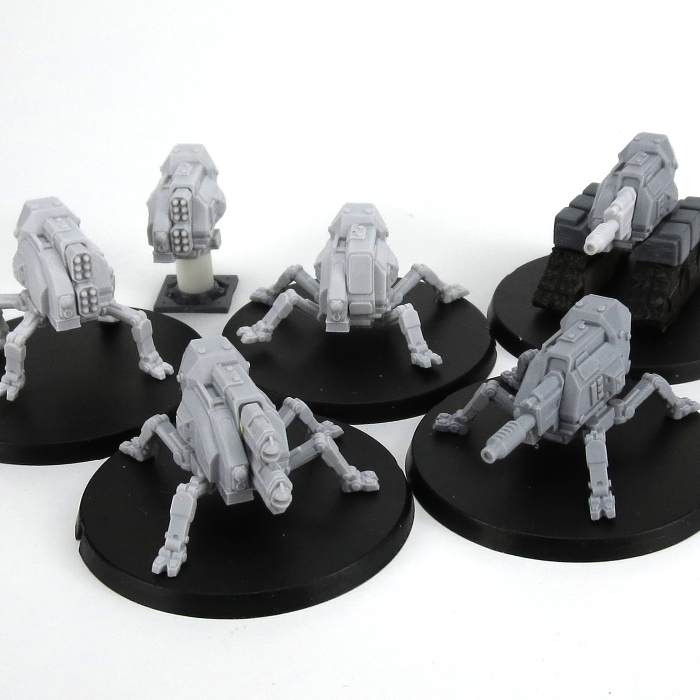 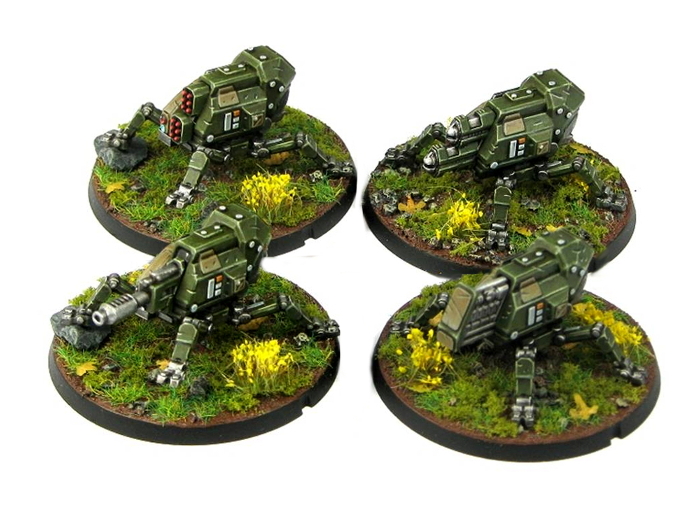 While sharing a superficially similar configuration, the Contractor Drone is a distinctly different model from the Spider Drone, with a chassis that is bulkier and taller. It also has weapon mounts situated beside its off-centre sensor unit as opposed to the Spider's side-mounted set-up. The drone's legs all fit into any of the four shoulder sockets, with a barrel pivot allowing them to be positioned through a wide range of movement. The equipment options slot in with a large locator tab. If you want to keep your options open, you can use a small piece of blu tac or similar re-usable adhesive to temporarily fix them in place and swap them out as you want. 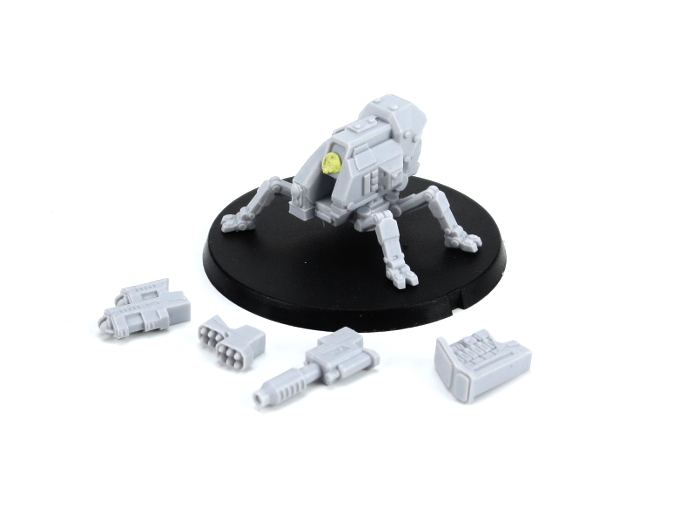 Since I have problems assembling things the way they're supposed to be, I couldn't resist taking a knife to the kit to see what I could do with it. For a taller profile, I repositioned the feet on the below drone by soaking the legs in hot water and then bending them. I also cut through the legs right beside the shoulder assembly and glued them back on at a shallower angle. One of the weapon options - Strike Missile Pods - didn't make it into the kit for the initial release. There are a couple of fairly easy ways to get around this problem if you want Strike Missile-equipped drones. For this one, I took a pair of Strike Missile pods from the Hunter Warmech kit, trimmed them up a little to fit onto the Contractor Drone front and glued them together. If you don't have a Hunter kit to hand, you can also take the Cluster Missile pods, trim the missiles flush with the front of the pods, glue a 1.5mm hole into the front of each pod and glue in two pieces of 1.5mm plastic rod trimmed to points. For a closed version of the Resupply drone, I cut through the supply cache directly behind the front panel using a razor saw, and then glued the panel directly to the front of the drone. Legs are all well and good, but sometimes a more stable platform is called for. On the below drone, I replaced the legs with a skirt made from sections cut from a lintel piece found on the Maelstrom's Edge terrain sprue. Under that, I added some tracks purloined from an old Mechwarrior tank model. The Contractor Drone chassis also makes a nice, solid foundation for a remote turret assembly, to be installed on fortification walls or vehicle hulls. In place of the legs, I added a mounting column cut from a length of plastic tube, and inserted that into the small pipe fitting from the Maelstrom's Edge terrain sprue. You can pick up the Contractor Drone along with the rest of the Maelstrom's Edge model range from the webstore here.

You're viewing a weblog entry titled Modeling Spotlight: Epirian Contractor Drones. If you like this entry you might want to: