Way back in the day, the original version of Games Workshop's Necromunda game came with a small table's worth of industrial-styled terrain that was constructed from printed cardboard and held together with plastic bulkheads. Many battles were fought over my set of this terrain, and so when a friend and I started talking about revisiting the original Necromunda rules, I thought it would be fun to put together an updated set of terrain inspired by that original battlefield. This week I put together the first of the large platform structures. 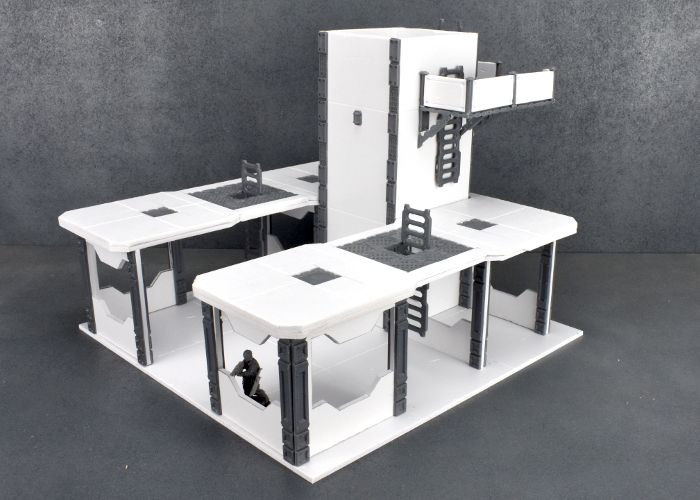 I started this build by sketching up a rough design for the structure. The aim wasn't to duplicate the original version, but to create something similar to it, with an eye towards making the structures look a little more like actual structures with some sort of purpose rather than just random platforms. 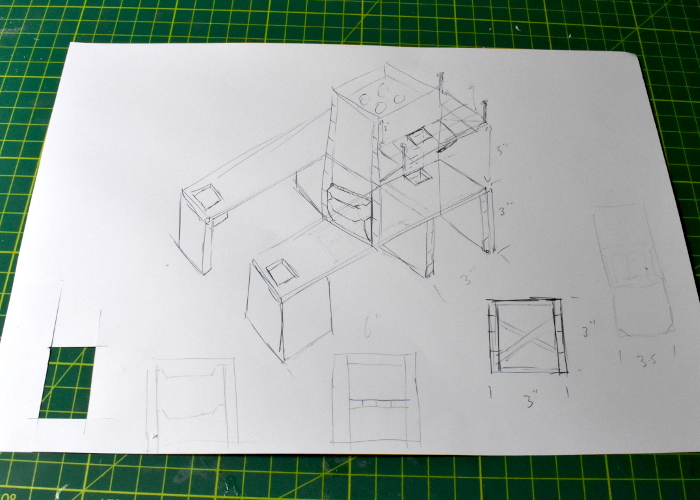 3mm foamed PVC has become my go-to for buildings, as it's easy to work with and lightweight, but quite durable. So to kick things off, I grabbed out the PVC and some support struts from the first Maelstrom's Edge terrain sprue, and put together eight bulkheads. These were made from a single piece of PVC cut to shape, with two support struts running vertically up the sides of each face. 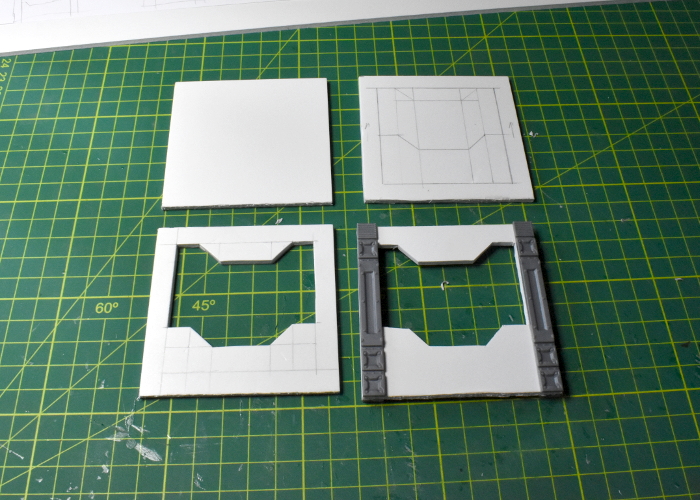 Four of the bulkheads were left as standalone pieces, while the other four were joined into corner pieces for the front of the structure. 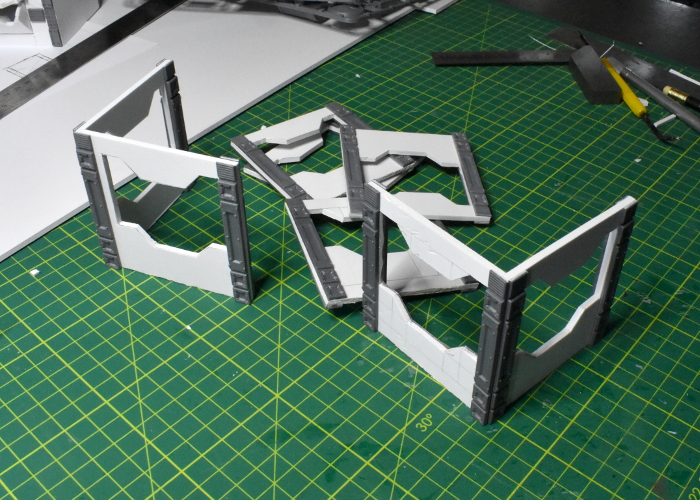 I used some more PVC to put together a box shape for the tower. The cutaway at the bottom of the front wall would be used to add a trash receptacle - my thought was for the tower to be some sort of trash processing unit. 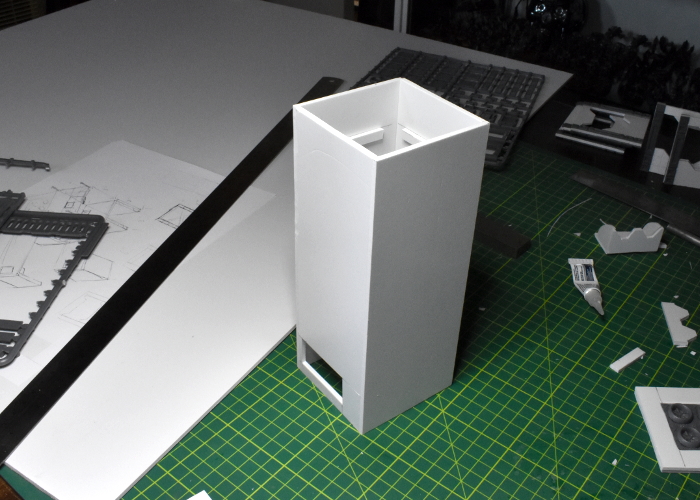 The roof of the tower has four exhaust fans, taken from the second terrain sprue. I mounted these onto floor panel pieces, just shaving off a little around the bottom edge of the fan to make them fit neatly inside the bracing pieces on the panels. 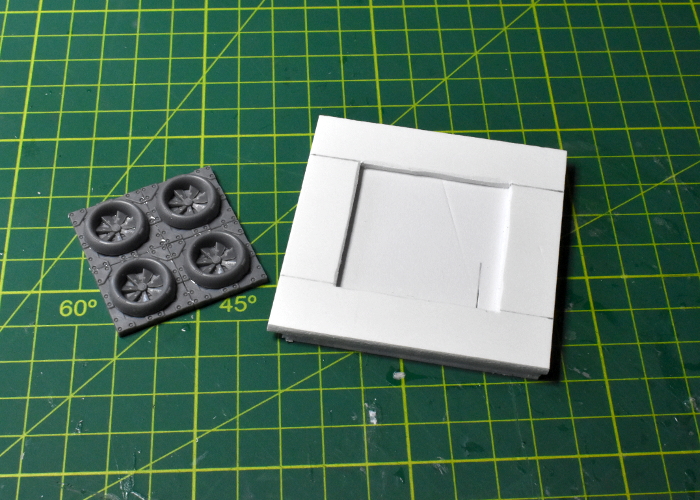 The door for the trash unit was made from pieces of foamed PVC, cut to fit neatly into the opening to look like it's jammed open. 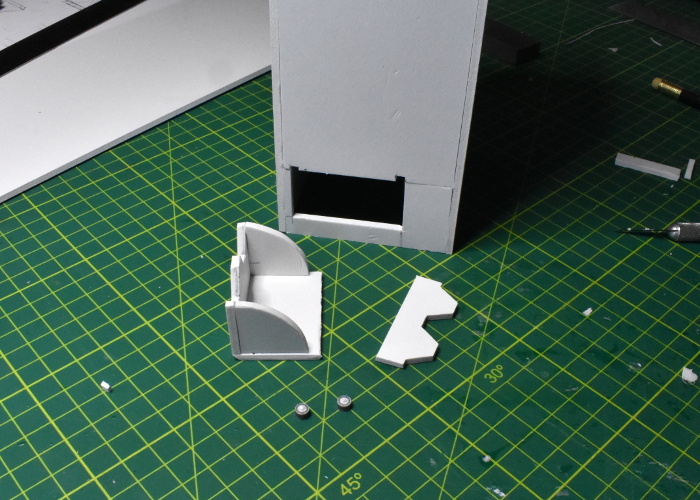 To conceal the joins on the tower walls, I ran a strip of support struts from terrain sprue #2 up each joint on the front and back, and then glued on the roof and a control panel for the trash unit. 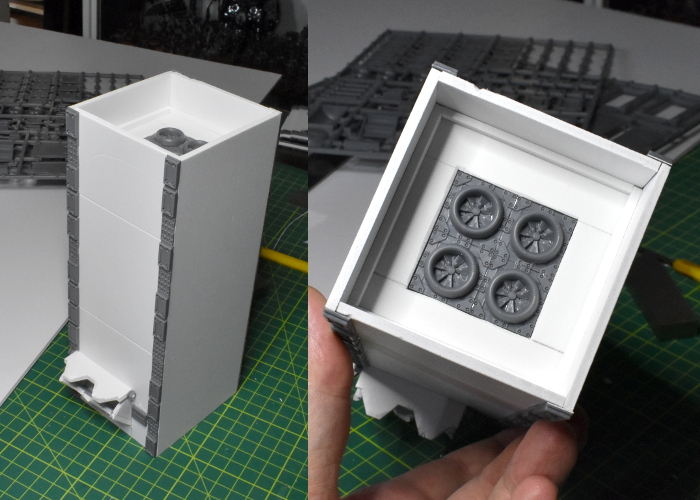 For the floor of the first level, I used two layers of PVC, with some holes cut in to insert some floor mesh pieces from terrain sprue #2. 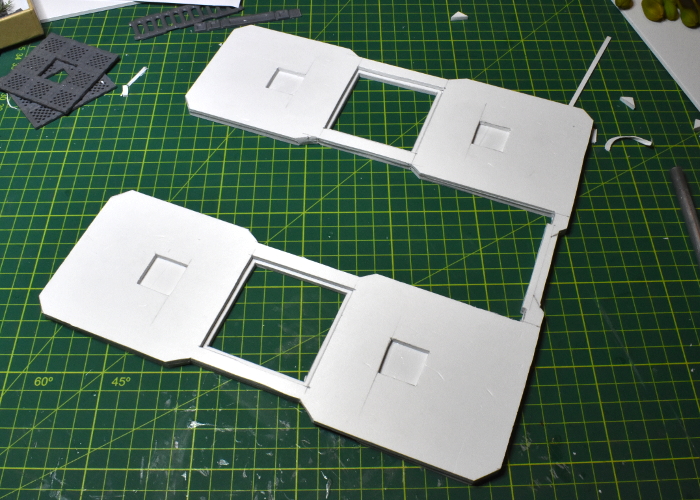 I glued the bulkheads onto the underside of the floor piece, and glued the plastic floor panel pieces into the holes. With a very minor bit of trimming, ladders from terrain sprue #1 fit neatly into the central hole in the grating sections, hanging down to about an inch above ground level - low enough for someone (or at least, someone with upper-body strength!) to grab the lower rungs and haul themselves up. 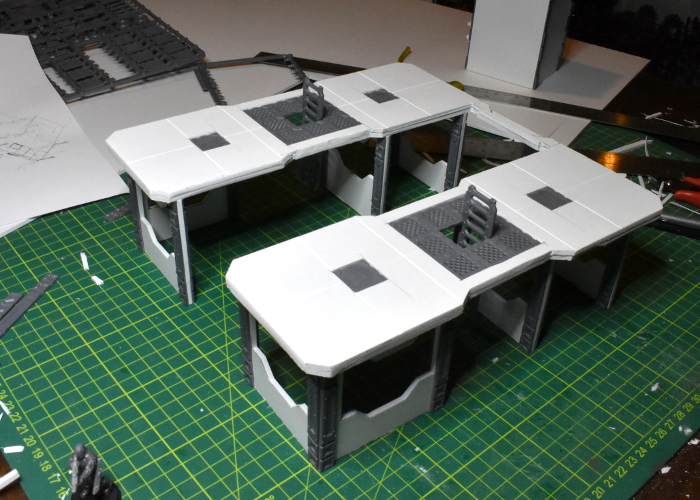 On the back of the tower, I added a generator piece from terrain sprue #2, bulked out with a little PVC to make it protrude enough to provide a neat little covered firing point. 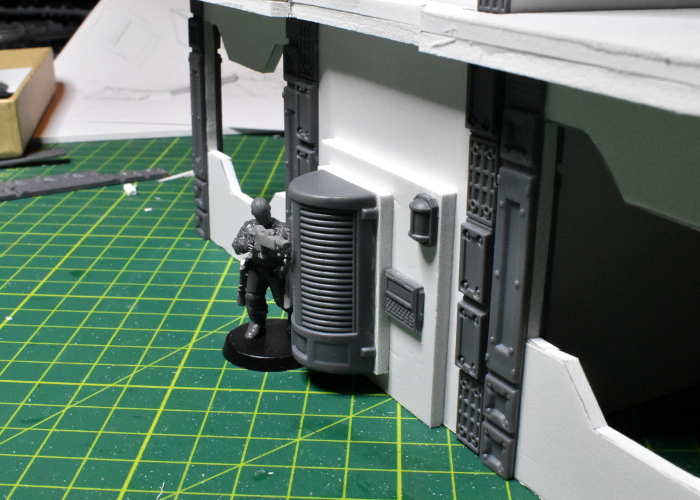 For the upper level, I put together a catwalk using floor mesh pieces from terrain sprue #2. 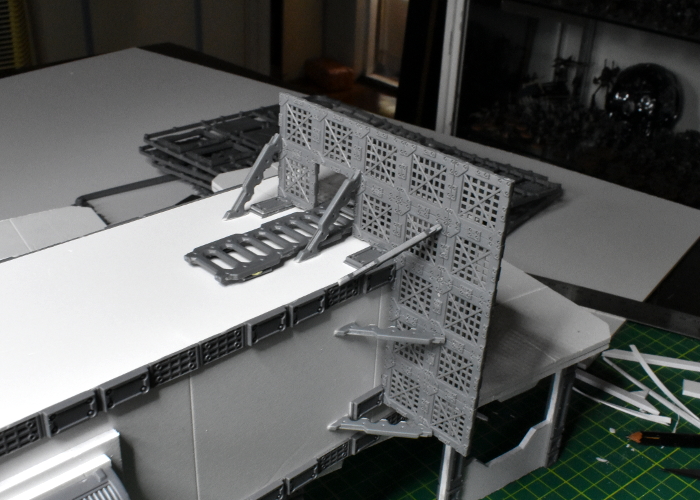 The support braces for the catwalk were cut from the sides of a ladder. The ladder up to the catwalk has some of the rungs leftover from cutting the supports glued to the back, to space it out from the wall slightly. 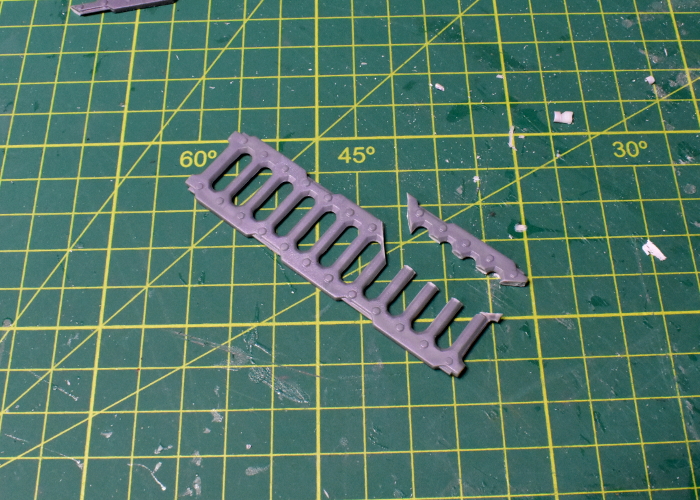 High catwalks aren't very pleasant places to be in battle without some cover, so I added a balustrade using posts from terrain sprue #2 and some offcuts of PVC. A trimmed down ladder added some access to the roof level. 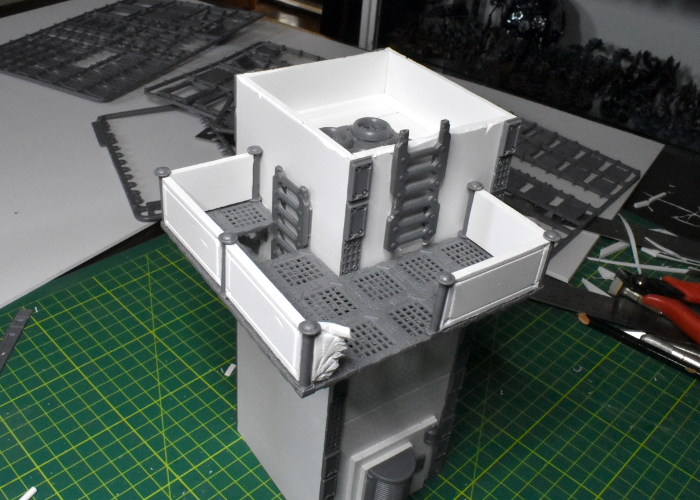 The other side wall needed some detail, so I grabbed the junction box from terrain sprue #2, and some aluminium rod and installed some exposed wiring. The clamp pieces were made from short sections of plastic rod and some sections cut from the support struts from terrain sprue #1. The lower end of the thinner cable will drape over the first level floor, having been severed from wherever it was originally attached to. 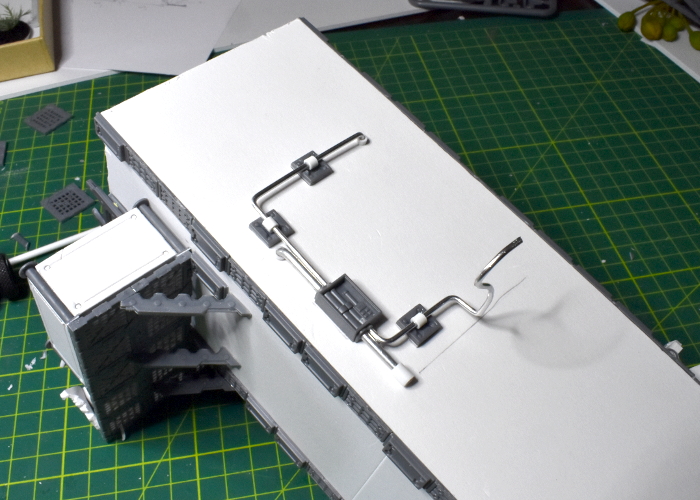 Finishing up by adding a light to the front wall and an access hatch to the bottom left wall of the tower, I also added a 10' square of PVC as a slab base for the structure. At the moment, the base, first level and tower are all separate pieces, and the ladders are all similarly unglued. I will glue the base onto the bottom of the bulkheads after painting the underside of the first level, and glue the tower and ladders in place once they are painted. I'll probably also add a larger piece of hardboard under the whole thing for some extra rigidity and also to give it some more weight on the table - better to prevent it sliding around. 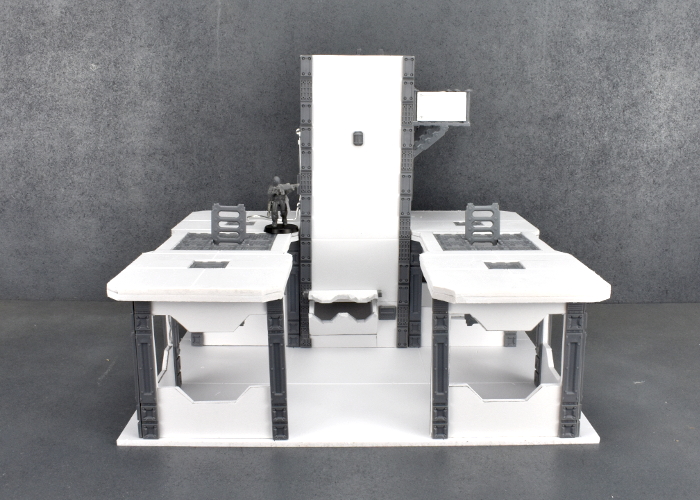 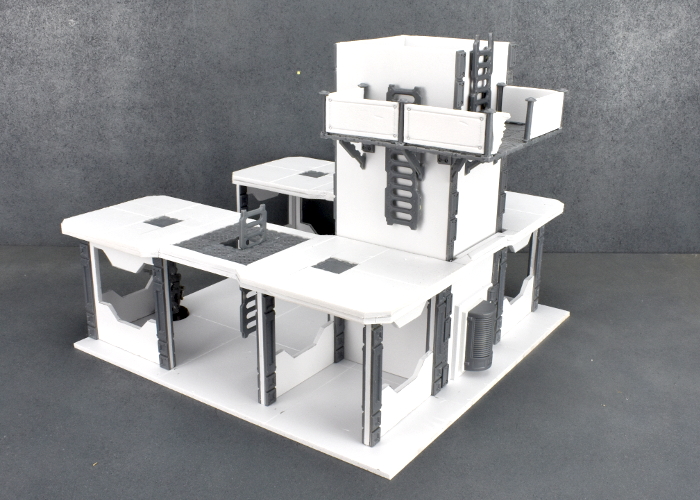 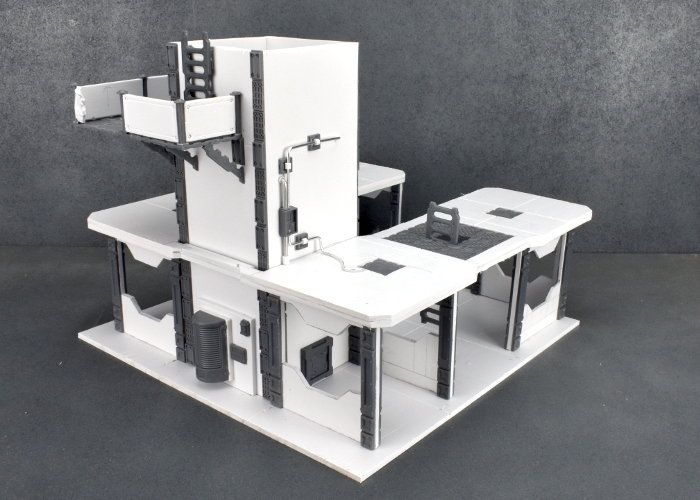 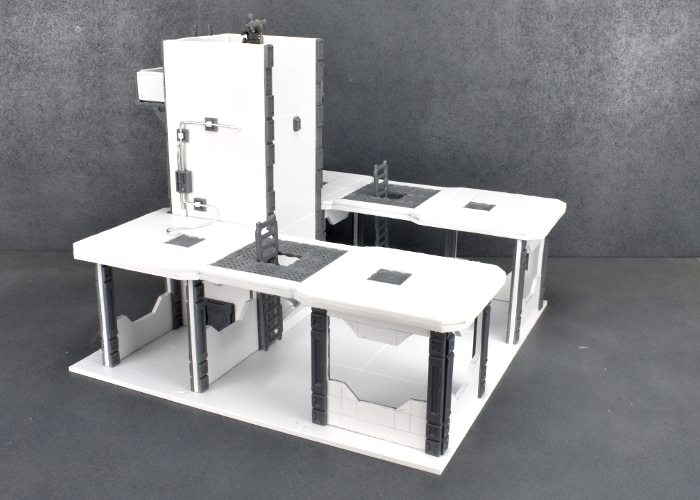 Painting will come later - I'll get a few more structures made up over the coming weeks, and then go through painting everything together!

You're viewing a weblog entry titled Terrain Spotlight: Trash Processing Unit. If you like this entry you might want to: