On one of my periodic rambles through the plumbing department at the local hardware store (because how else would I spend my weekends?) I came across some pipe fittings that I thought would be just perfect for some different line-of-sight-blocking terrain to break up the sea of square buildings on my urban table setup. With the addition of a couple of old computer fans and a few components from the Maelstrom's Edge terrain sprue, I had a trio of cooling towers ready for the table. 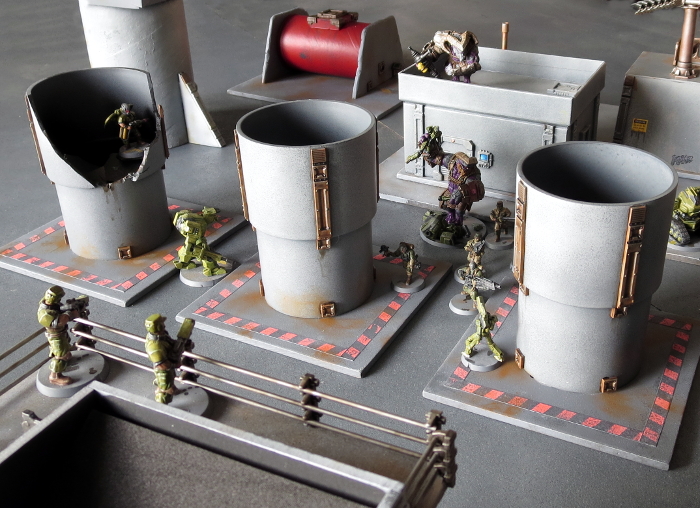 The part that I used for the main body of the tower is a 'round socket downpipe' intended for rain guttering on a house. 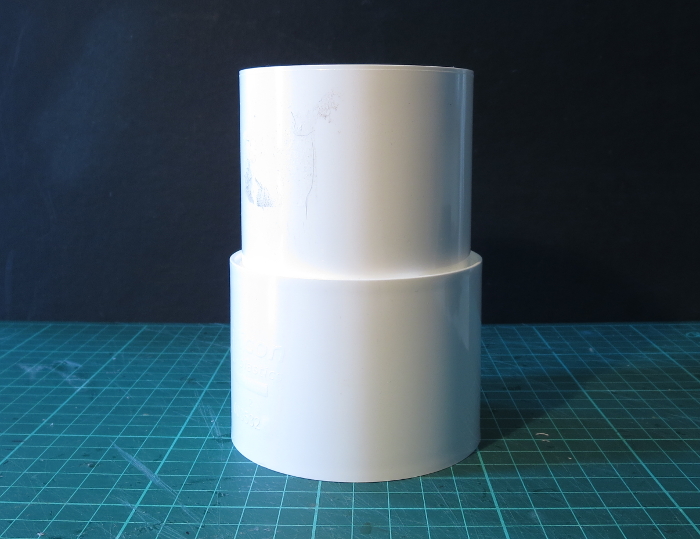 As the downpipe is made of PVC, and is quite shiny, I started out by giving it a light sand with some fine grade sandpaper. This provided a better surface for glue and paint to adhere to, and also allowed me to remove the embossed manufacturer logo on the side. 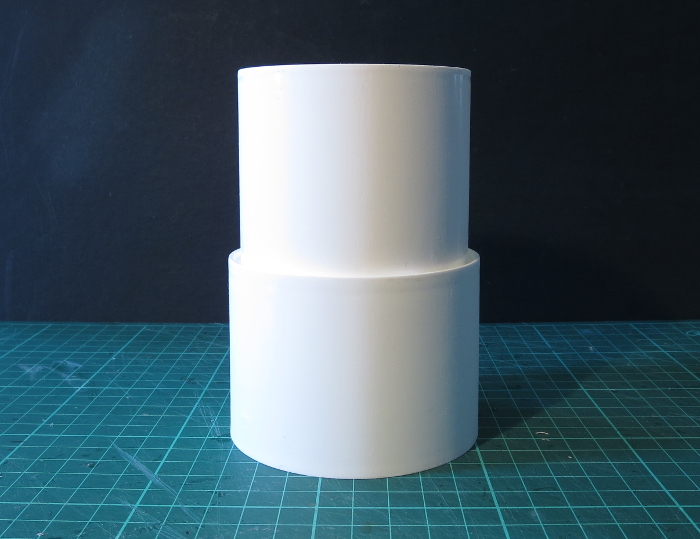 Cooling towers tend to be largely featureless constructions of plain concrete, but that's a bit boring for a gaming table. So I grabbed four reinforcing struts from the Maelstrom's Edge terrain sprue, and chopped off the two square sections from the end, so that the remaining length would fit neatly onto the wider portion of the downpipe. Then I glued the pieces on using an 'all plastics' superglue, which is a two-part superglue that has the normal glue plus a 'primer' that goes on first to help strengthen the bond. For a more flush fit, I could have sanded down the side of the downpipe where the strut pieces would sit to form a flat strip on the curved surface, but the struts are narrow enough that the gaps that result from gluing them straight to the curved side aren't really noticeable, so I didn't bother. 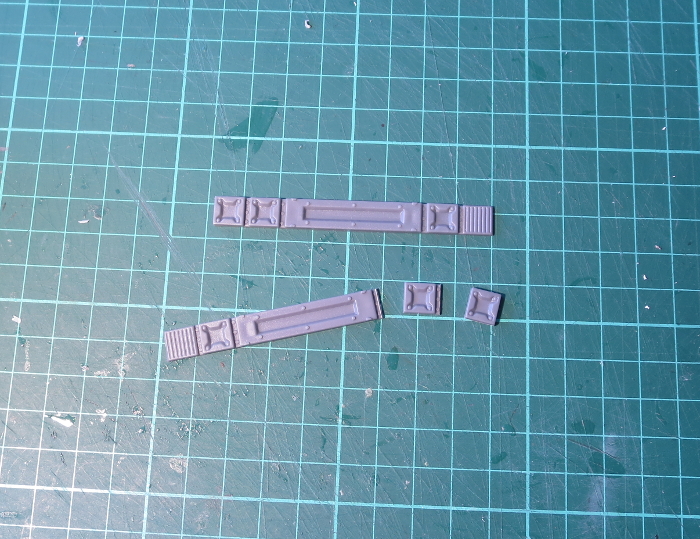 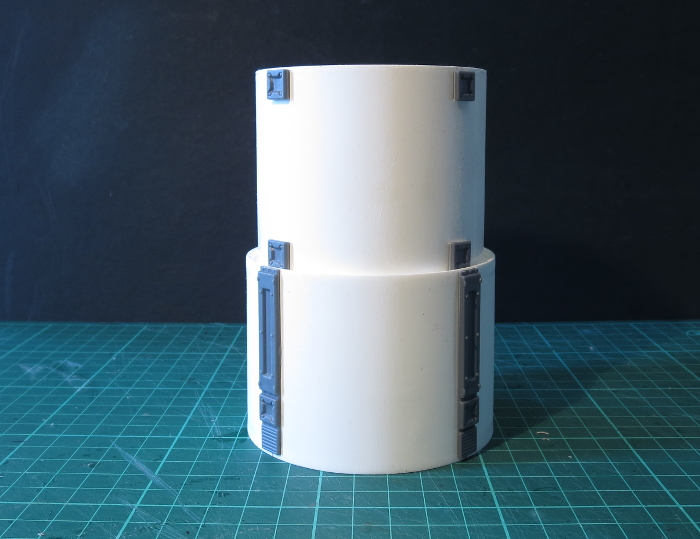 To add some detail to the inside of the tower, I dug out an old computer fan from my box of assorted 'probably use this for terrain one day' rubbish hobby material. Using a pair of heavy-duty clippers, I snipped through the struts that held the case on the outside of the fan. 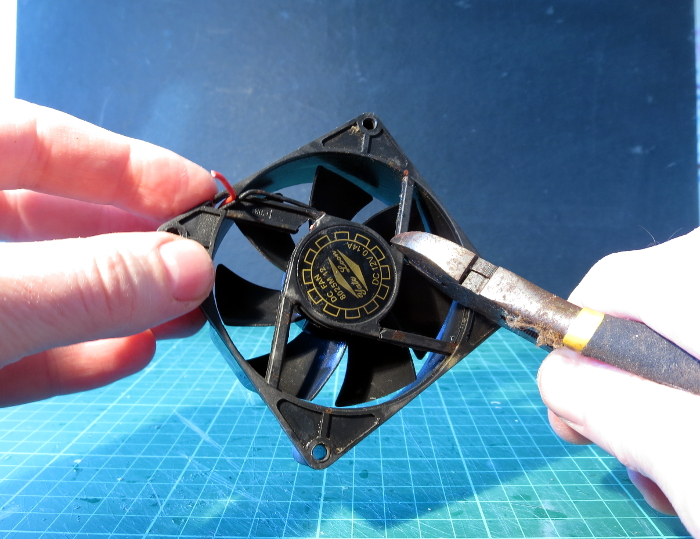 On the inside of the downpipe, there is a ridge where the thinner and thicker sections meet. I cut a piece of 2mm thick plasticard to fit neatly onto that ridge, providing a platform for the fan to sit on. I glued the plastic strip in place, but left the fan unglued for now, to make painting easier. 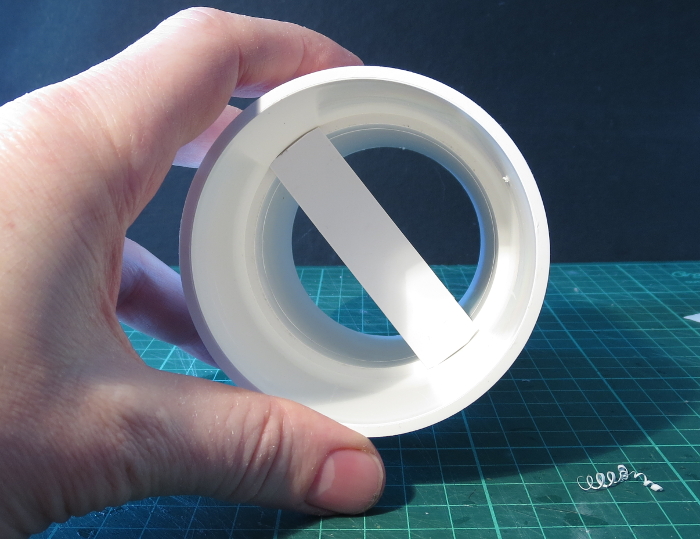 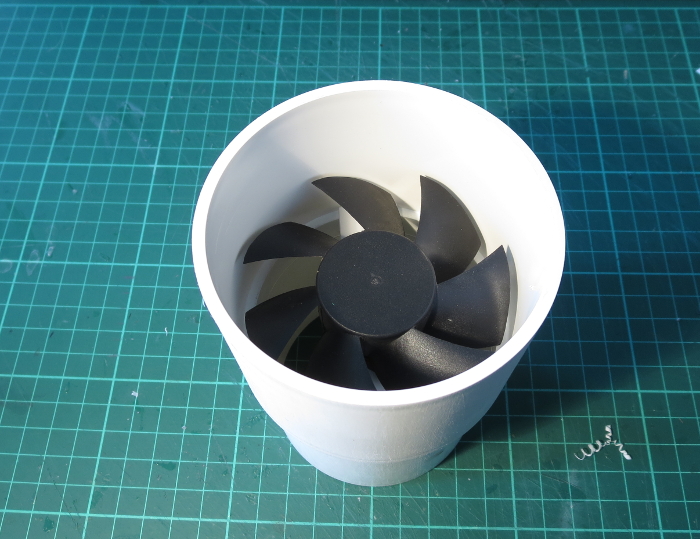 Painting went through a process that is probably familiar to anyone who has been following these articles. I started by undercoating with flat black spray. 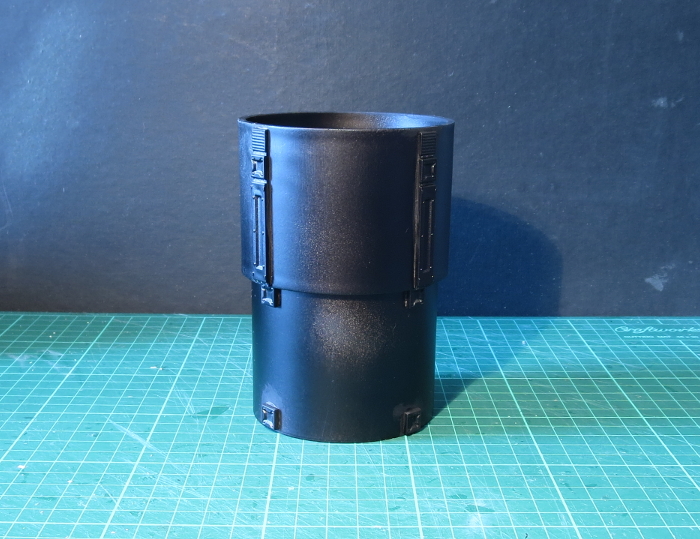 Next I sprayed with a medium grey, and to add some texture to the flat surface added a light spray of light grey while the first coat was still wet. This creates a nice, dappled, concrete-like effect. As I only had gloss grey sprays on hand, once the grey was dry I gave the tower a generous coat of Testors spray lacquer. This both kills the gloss and protects the paint from scratching off the PVC as easily. 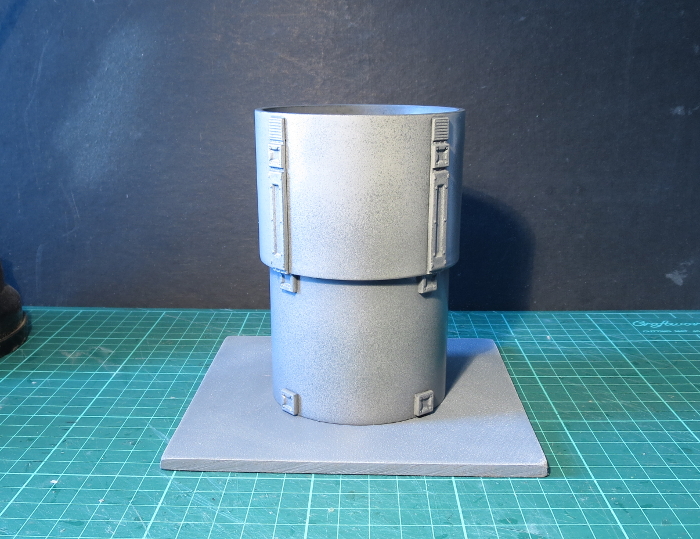 Next, I gave the strut pieces a coat of Vallejo Beasty Brown... 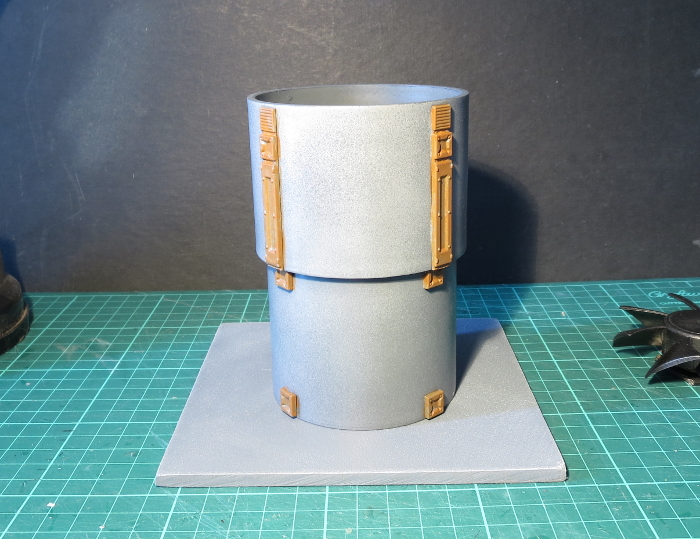 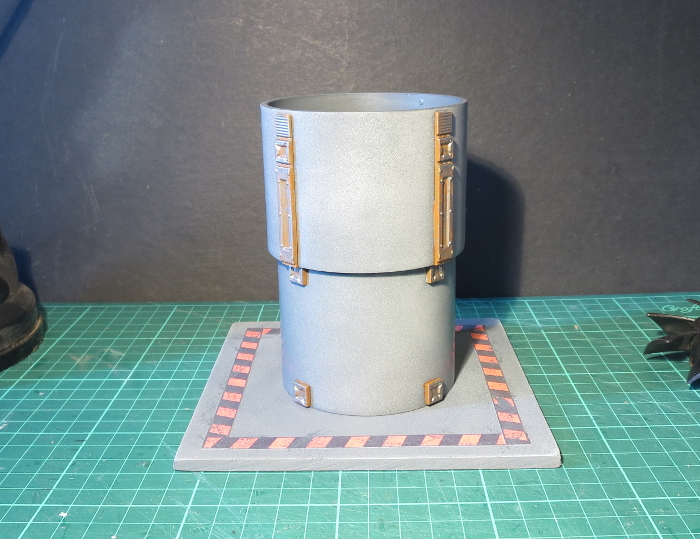 ...and finally a wash of Army Painter Strong Tone. While all of this was going on, I also cut a square of Masonite for a base, sprayed it grey, drybrushed with light grey and white, and added some hazard stripes that I created in Gimp and printed out. These were glued in place with PVA glue, and then weathered with a sponge and some medium grey (you can find a tutorial on sponge weathering here). 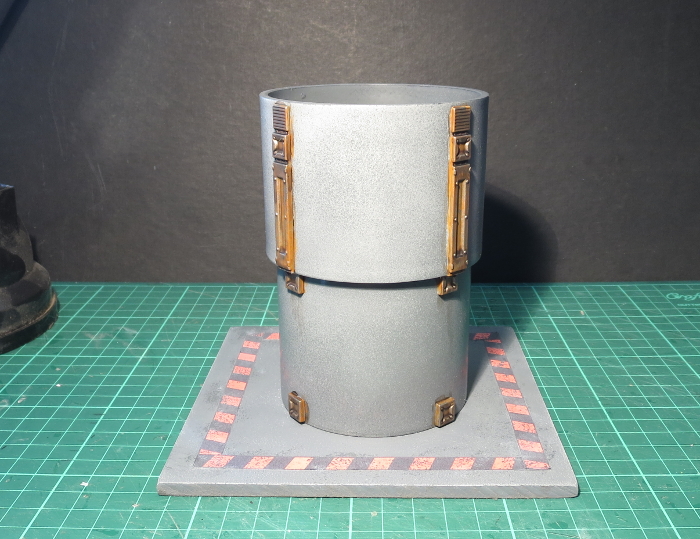 The fan was sprayed with some Rustoleum Aged Brass, and then given a light drybrush with Pig Iron, before being glued in place inside the tower. 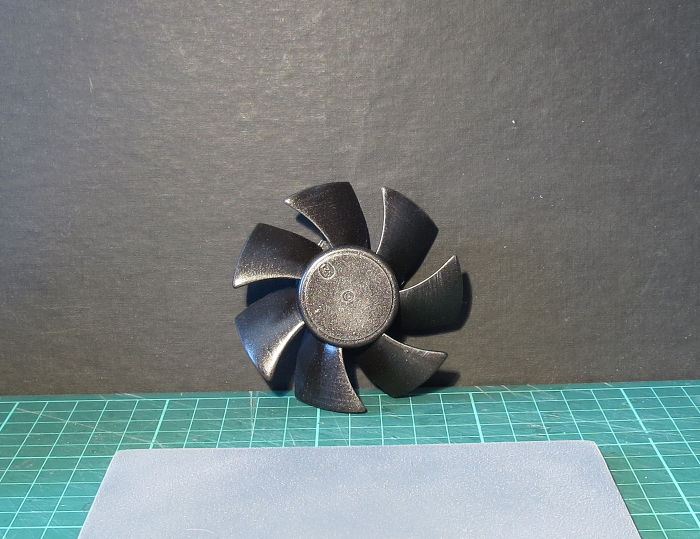 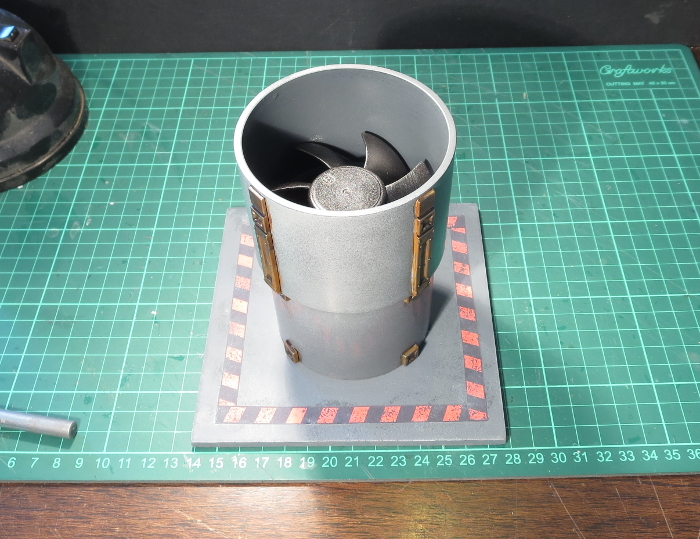 The tower was glued onto the base - I lightly sanded the bottom of the downpipe to remove any spray paint, and then used the 'all plastic' superglue again. Finally, some weathering was added with a large drybrush and some more Beasty Brown. 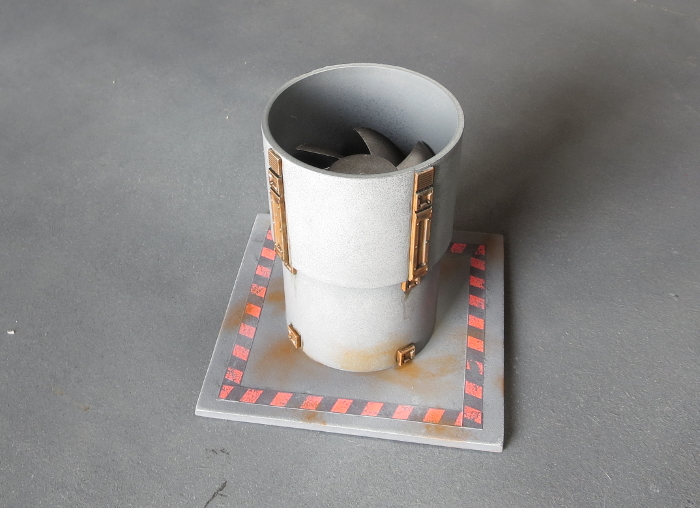 I had bought three downpipes, but found that I only had two computer fans that matched. Rather than use a mismatching fan in the third tower, I decided to make one battle-damaged by cutting away a chunk of one side. I left a part of the fan platform to provide a place for a model to stand, and glued the pieces of the tower side inside and underneath the platform to give it some support. Obviously the tower was hit with some sort of implosion device, or a cleanup crew sorting out the damaged tower just threw all of the rubble inside to get it out of the way until the tower could be replaced. 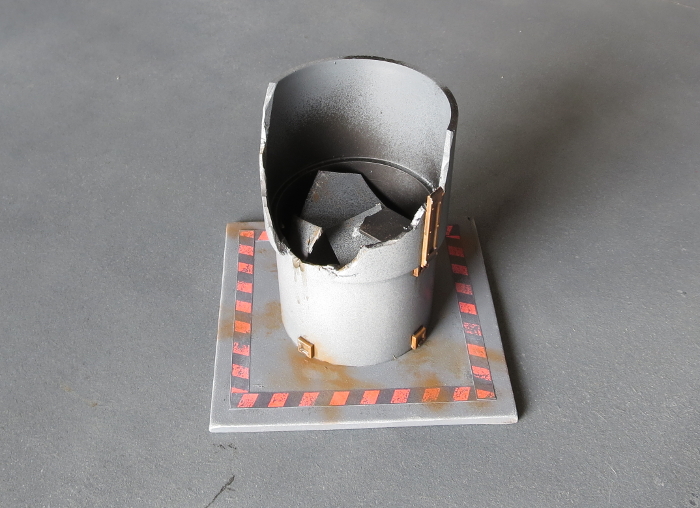 The three towers together, ready for gaming: 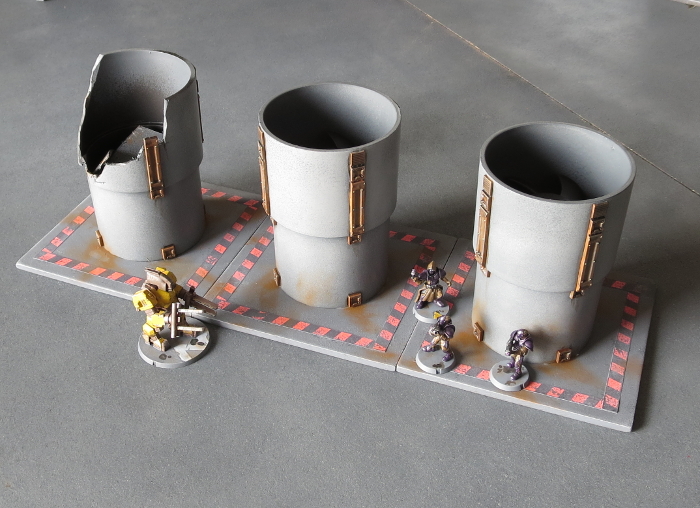 You're viewing a weblog entry titled Terrain Spotlight: PVC Pipe and PC Fan Cooling Towers. If you like this entry you might want to: