I'm rolling into the new year with another building for my ongoing underhive table project. The Necromunda Outlanders supplement came with a nifty tower that had a (more or less) functional lift on it, for speedy access between floors. The original cardboard lift piece clipped into the side of the bulkheads that made up the side of the building. For this build, I decided to make use of the magic of magnets instead! 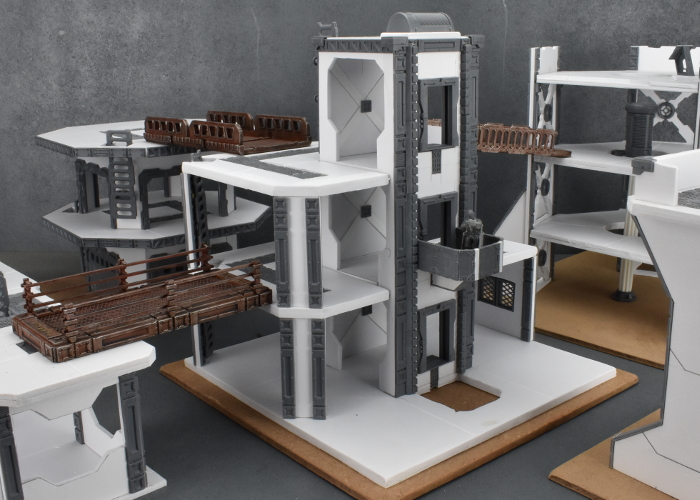 As I've done for most of these buildings, I started with a rough sketch, to get an idea of what I was aiming for. The final structure actually wound up a mirror-image of the sketch, but the basic idea was there. 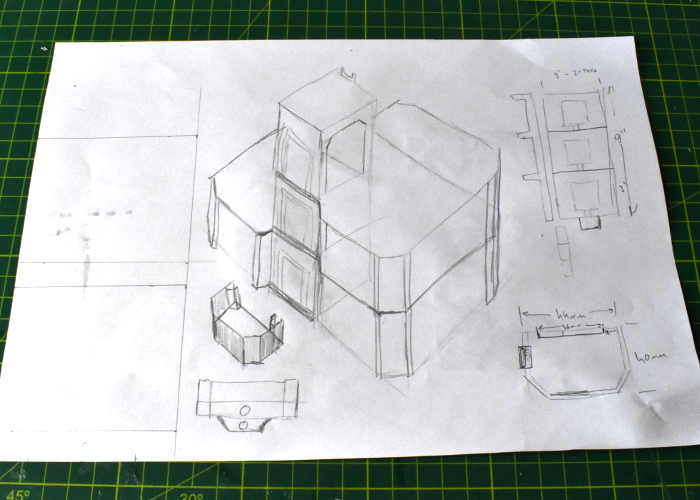 The lift tower would be three levels, with doorways onto each level. I wanted to use a doorframe on both sides of the wall to keep things looking pretty, so used a strip of 3mm foamed PVC sheet for the main bulk of the wall, and padded it slightly with some 1mm sheet to make the doorframe holes deep enough to accomodate the inset flanges from both door pieces. The doorway pieces were taken from Maelstrom's Edge terrain sprue #2. 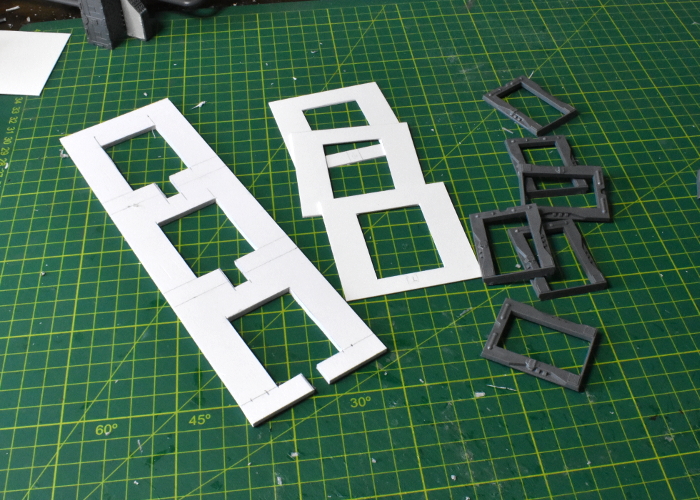 I cut the other walls of the tower from some more 3mm foamed PVC, and added some detailing to the back wall using some more of the 1mm sheet and some plastic offcuts from previous projects. 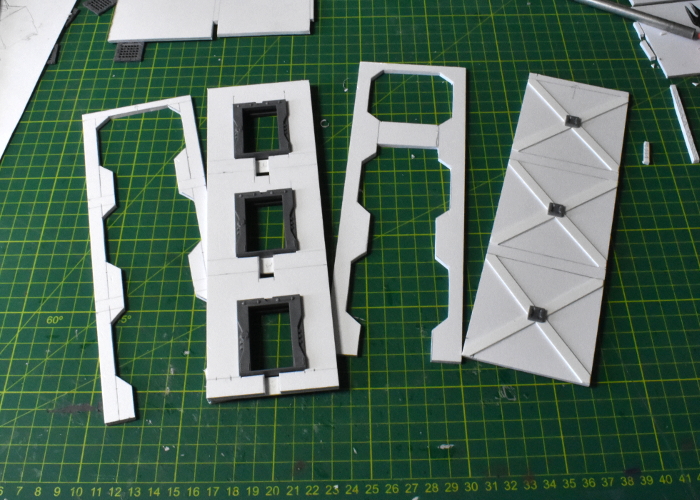 Under each doorframe, on the outer facing of the wall, I cut recess for the magnetic lift attachment. Into these recesses, I glued a piece cut from the terrain sprue #2 support struts, with two neodymium magnets superglued to the back. The magnets are facing opposite ways so the poles don't interfere with each other while sitting side by side. 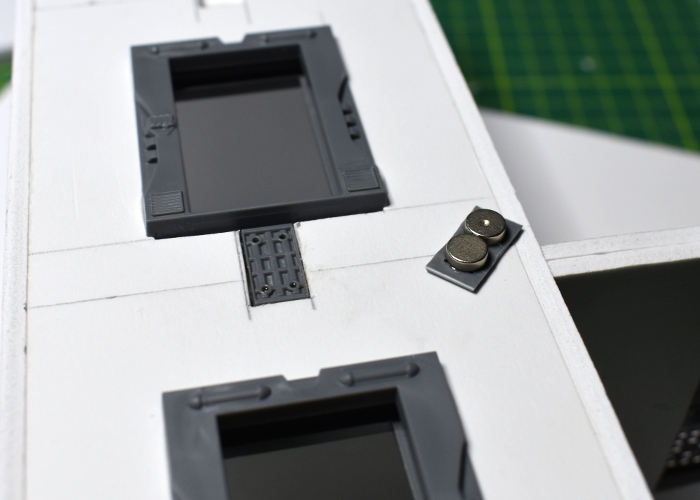 The lift was made from grating pieces from the terrain sprue, with a PVC support beam on the bottom. Into the end of the support beam, I drilled two 6mm holes and glued in another pair of magnets, making sure to get them the right way around to match the wall magnets! 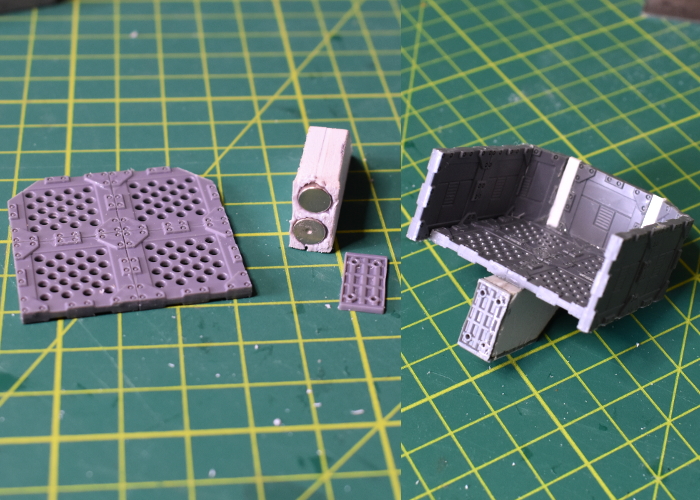 With the tower walls all glued together, I added some strips up the front edges of the lift wall using support struts and lintels taken from Maelstrom's Edge terrain sprue #1. These had been carefully factored into the wall dimensions so that the lift fit snugly in between them. 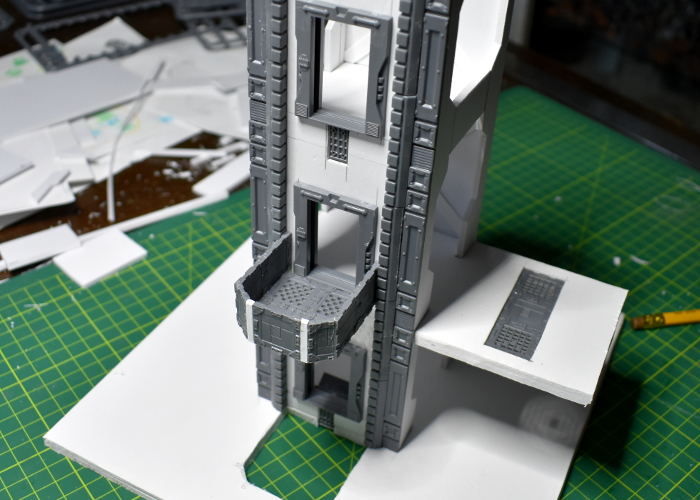 For the floors, as with most of the previous structures, I used double thicknesses of 3mm foamed PVC for rigidity, adding some strips of floor grates from terrain sprue #2 down the middle to break up the flat expanses. 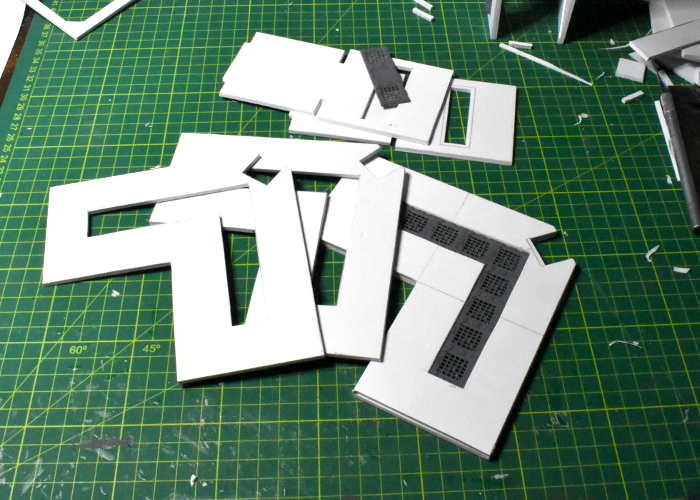 To support the outer corners of the floors, I cut some 30mm strips of PVC and added support struts from terrain sprue #1 up the edges of each facing. 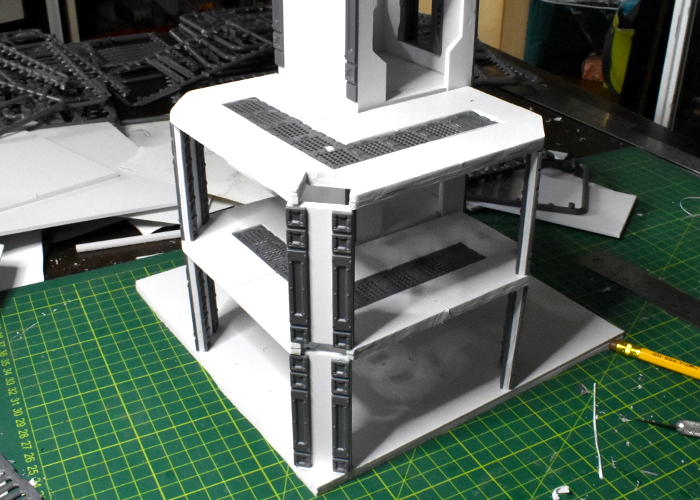 A couple of windows from terrain sprue #2 added to a square of PVC made for a nice cover-generating wall on the other side of the building, to support the small 1st floor platform. 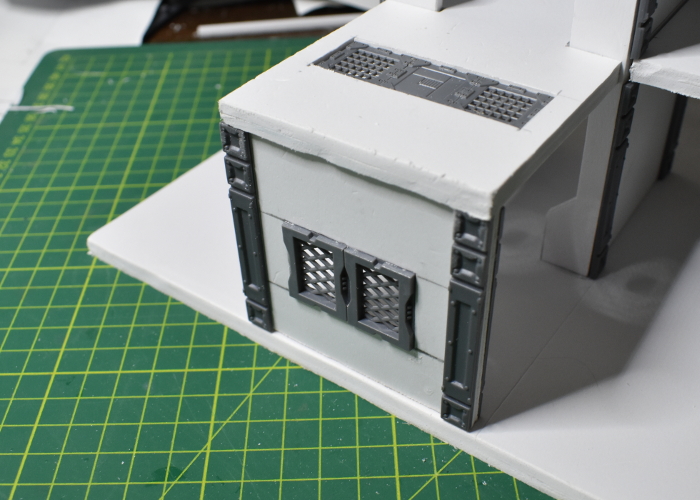 The lift doors wound up slightly above the floor on each level, in order to avoid having to lift the bottom floor up far enough to accomodate the magnetic strut on the underside of the lift. A set of stairs from terrain sprue #2 glued in under the interior doorframe on each level sorted out the step. 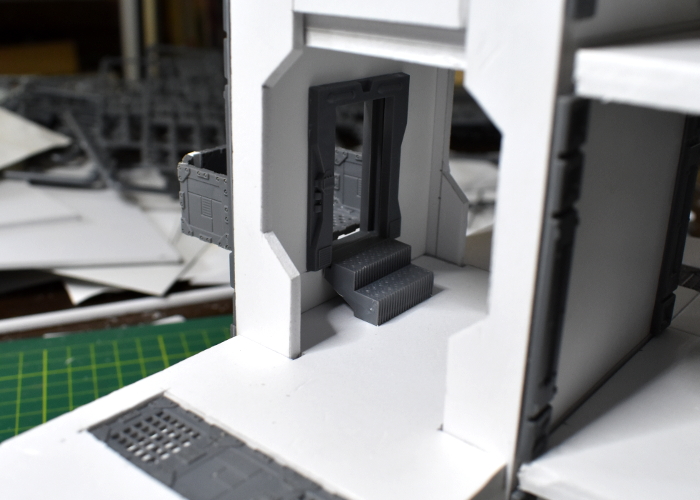 The roof was looking a little sparse, so I took a generator from terrain sprue #2, glued it to a rectangle of PVC for just a touch of extra height, and stuck that along the lift side of the roof to provide some low cover. 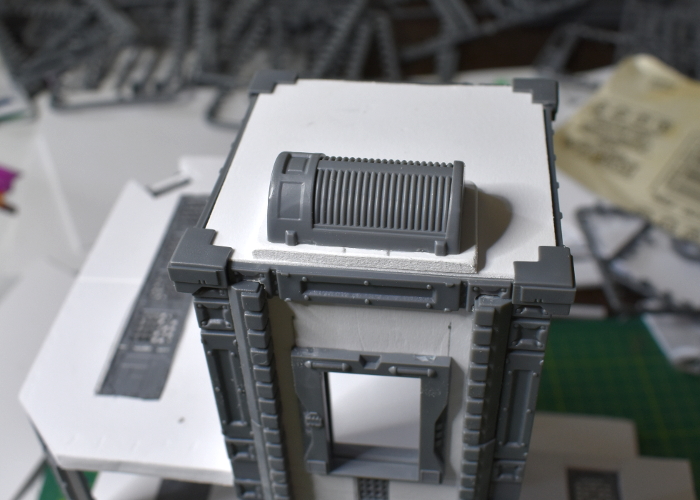 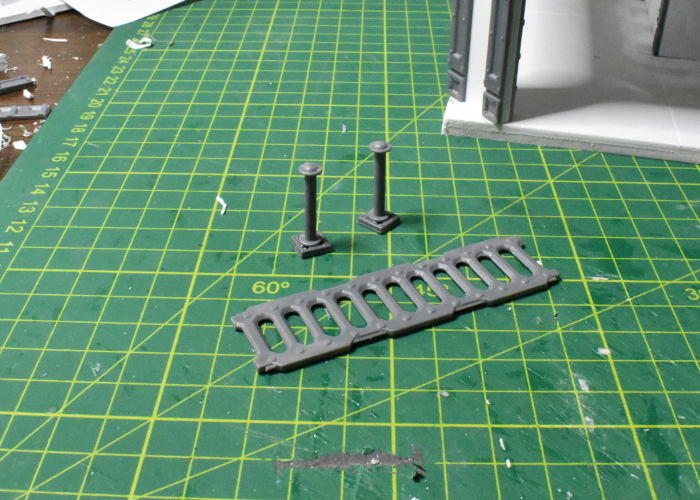 Finally, I cut a square of hardboard to sit under the whole thing for strength. At this stage, the floors are still unglued, for ease of painting. 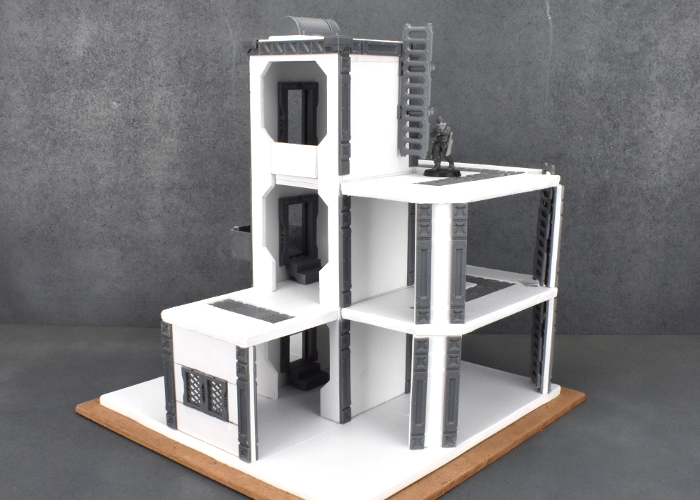 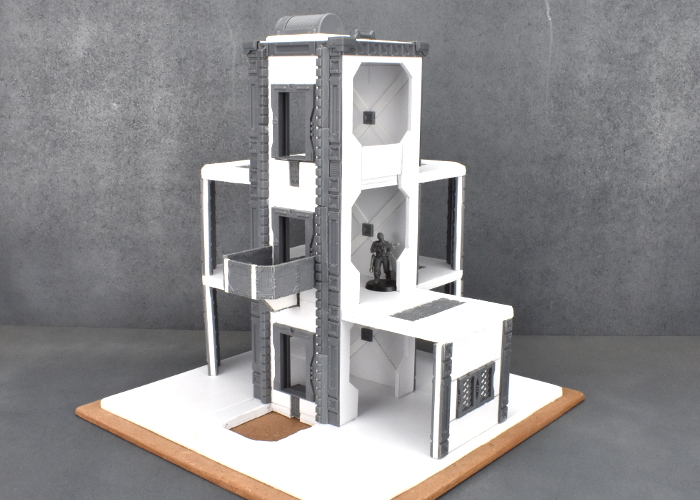 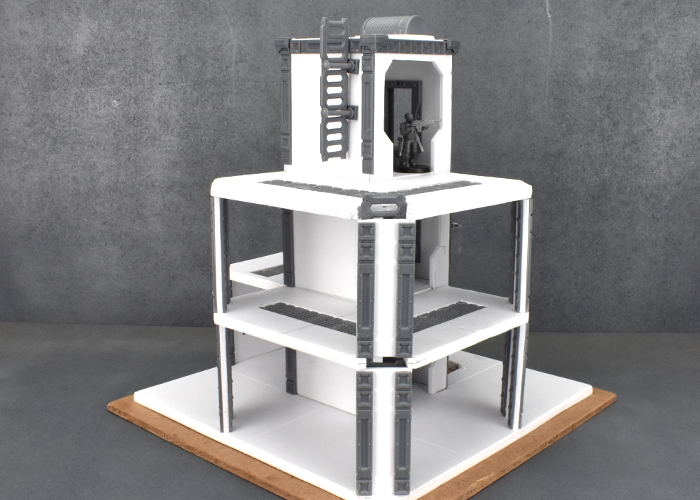 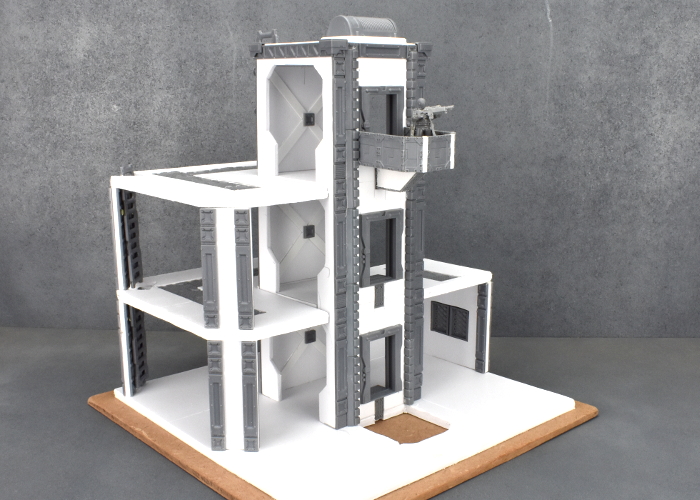 The whole collection so far, with some catwalks made for a previous article a while back: 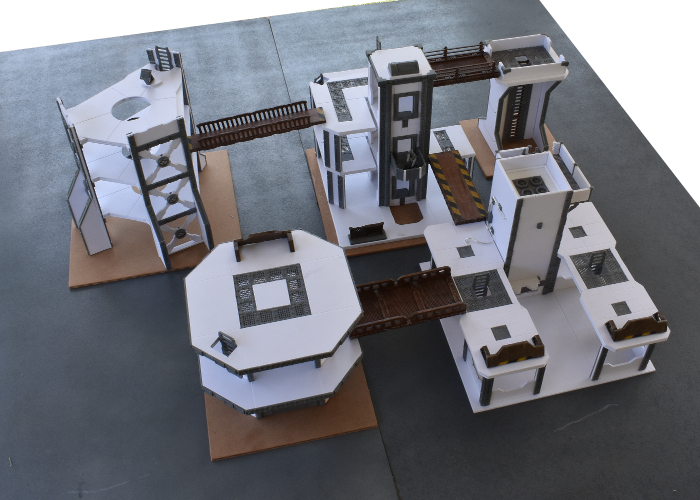 Looking at it all together, I think it might be time to get some paint on this lot, and then work on expanding out to a full table from there. Stay tuned!

You're viewing a weblog entry titled Terrain Spotlight: Lift Building. If you like this entry you might want to: