The addition of resin models to the previously all-plastic Maelstrom's Edge collection has allowed for factions to receive some new and characterful unit options to their ranges. Working with resin is a little different to plastic, though, and so I thought it might be helpful to run through some basic pointers on how to build and assemble these fantastic new models. 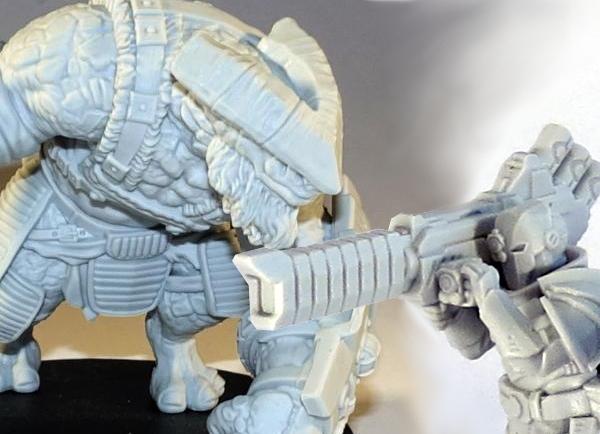 Resin looks a lot like plastic. With good reason: It is plastic!

In the miniature modeling world, though, we tend to use the term 'plastic' to apply specifically to High Impact Polystyrene, which is a particular type of plastic used in injection moulds. The raw plastic is melted and then injected at high pressure into a metal mould. This sort of casting is fast, but the moulds are expensive and require specialised machinery. 'Resin' instead refers to polyurethane, which is a two-part compound that is mixed together and then poured into rubber or silicone moulds. Resin produces crisper detail than polystyrene and the moulds are cheaper and easier to create, but is more labour-intensive to cast and the moulds wear out with use. As a result, resin tends to be used for smaller runs of miniatures, while polystyrene is used for models that are cast in high volume.

So, where to start?

Clean ALL the things

Resin models can sometimes have a bit of an oily residue on them from the casting process. This can affect how well the paint adheres to the model, so it's a good idea to remove it before you start painting. The easiest way to do this is to just wash the model in soapy water, lightly scrubbing with an old toothbrush to clean out the creases. 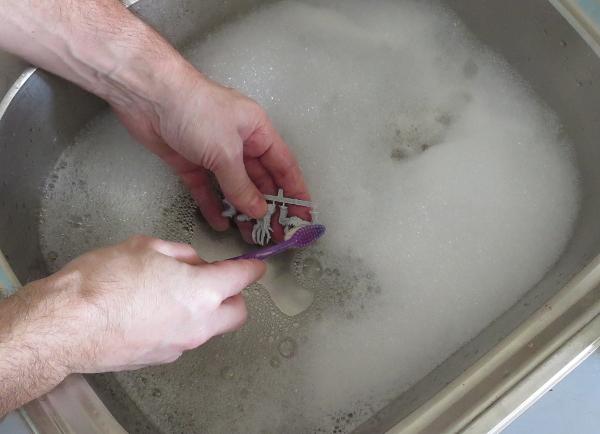 Flash may be the saviour of the universe (if just a man), but it's also a side effect of the casting process that can spoil an otherwise great paintjob. The moulds used for Maelstrom's Edge's resin models are replaced regularly, and so mould lines are minimal and are often minimised even further by running along edge detail rather than flat surfaces, but you should always go over the model before undercoating to catch any that might get in the way later. As with plastic or metal models, you can use a small file or emery board for this, but I find a sharp exacto-style knife blade does the best job, and works well for getting into creases and following detail. Just scrape gently along the mould line to flatten it out. 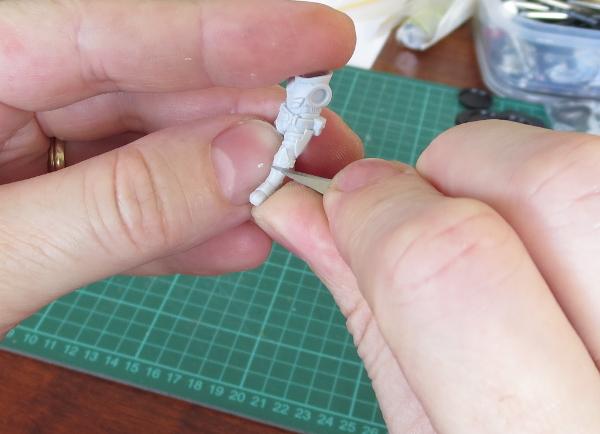 Nothing to get bent out of shape about...

During the casting process, resin will shrink slightly as it cures. This can cause thinner parts to develop a slight bend if one side cools faster then the other. With plastic or metal, you can often fix warped parts by just carefully bending them back into shape, but resin needs a little extra preparation to avoid having the part snap. Luckily, resin softens with heat, so the easiest approach is to dip the part in some hot water until it is warmed through, and then carefuly shape it to how you want it. Then dunk it into some cold water to 'set' the part again - resin has some 'memory', so will try to revert to its original shape while it's still soft. Cooling it quickly helps to avoid this.

Note that you can also use this method to reshape models to change their pose. It's particularly useful for organic shapes, like the tentacles on Karist Angels. 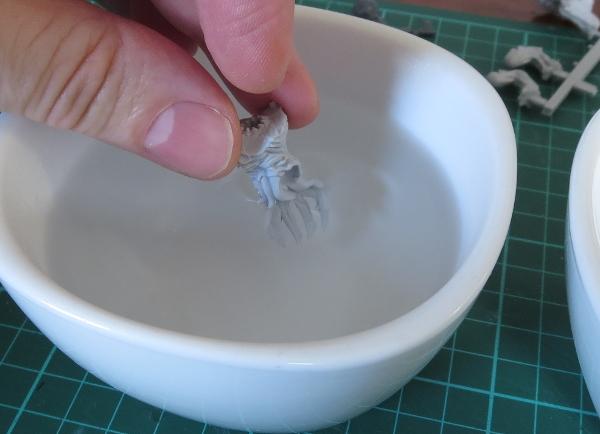 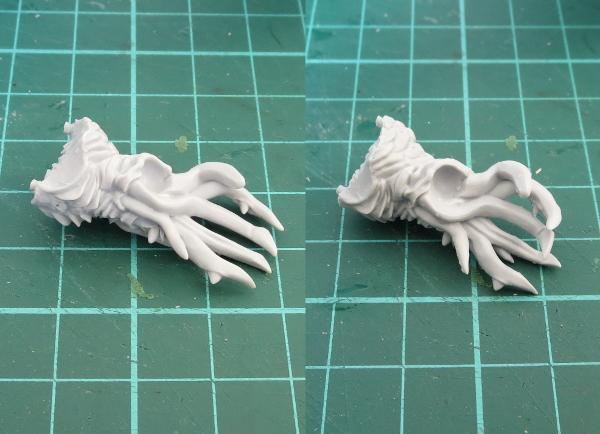 Maelstrom's Edge resin is a little harder than plastic, but is still quite easy to cut with a hobby knife or clippers. For larger parts, or to get a nice, clean cut, I recommend a razor saw. This has a super-thin, flat blade that is just perfect for slicing through models while minimising the loss of detail from the cut. 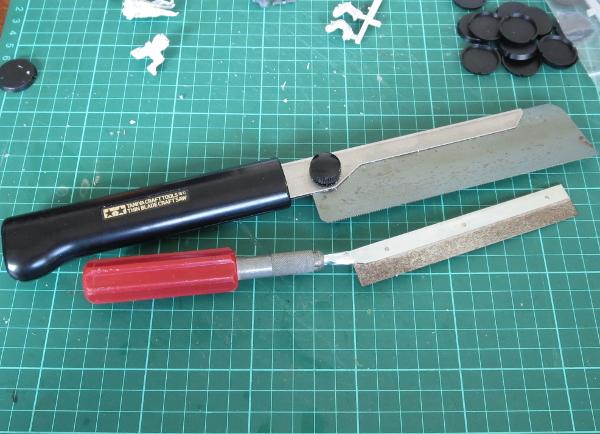 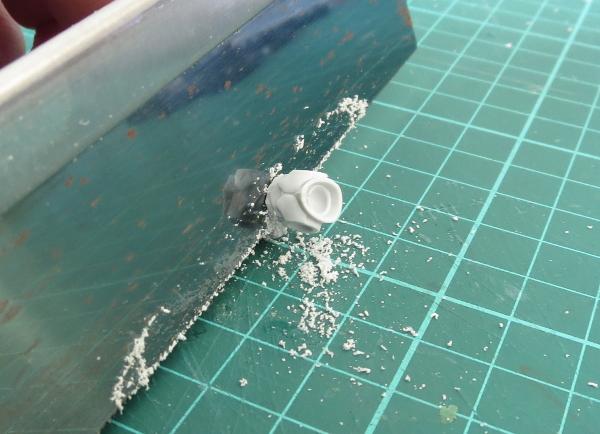 It's worth pointing out that if you're doing a lot of sawing, sanding or filing, it's best to do it in a well-ventilated area. That's not really specific to resin models - it's always a good idea to not fill your lungs up with rubbish!

Stick with me, kid!

Plastic glue, also sometimes called poly (or polystyrene) cement, doesn't work on resin models, as it's specifically designed for polystyrene. You will need superglue or a quick-setting epoxy glue for the best bond. Epoxy, even the quick-setting kind, can be a bit of a pain to work with due to needing to mix it and having a longer 'grab' time, so I prefer to use a superglue with a plastic primer. The primer is used to prepare the surfaces to be glued, and helps the superglue to grab tightly to plastics that superglue on its own doesn't adhere to as successfully. 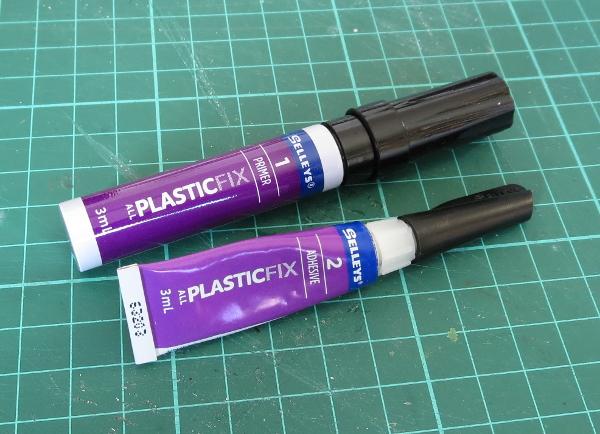 Use the same glue for sticking resin parts to plastic or metal. Wherever possible, make sure that the surfaces being glued are smooth and flat. There's a common misconception that scoring or roughing up the surfaces gives a better bond, but superglue actually works better the thinner it is. Having surfaces as close to flat as possible ensures that the glue spreads out super thin between them - thicker glue just creates a brittle bond. 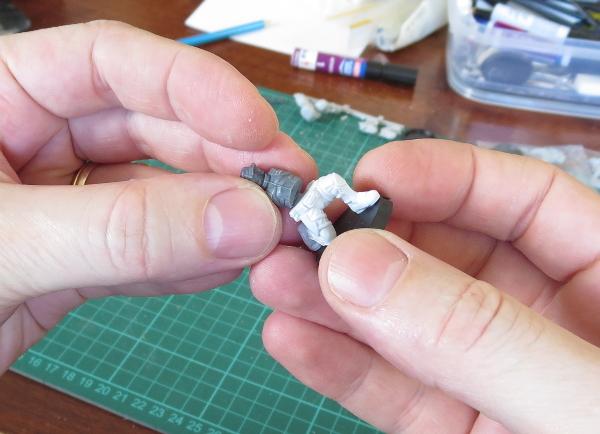 You're not pinning that on me!

If you are concerned about larger parts going astray with use, you can use thin wire to pin them into place for some extra durability. Use a pin vice to drill matching holes into the parts to be glued, add a piece of wire that fits snugly into the drill holes and glue in place. 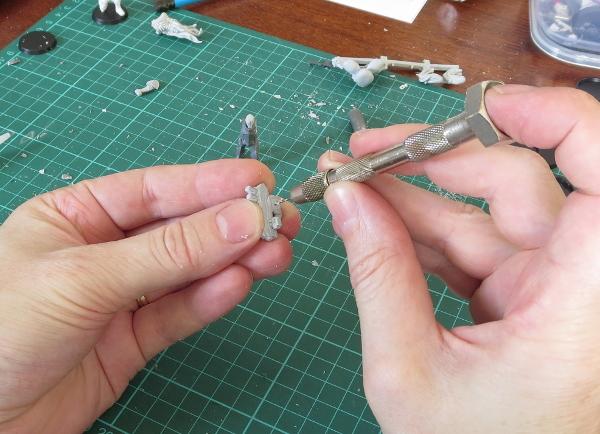 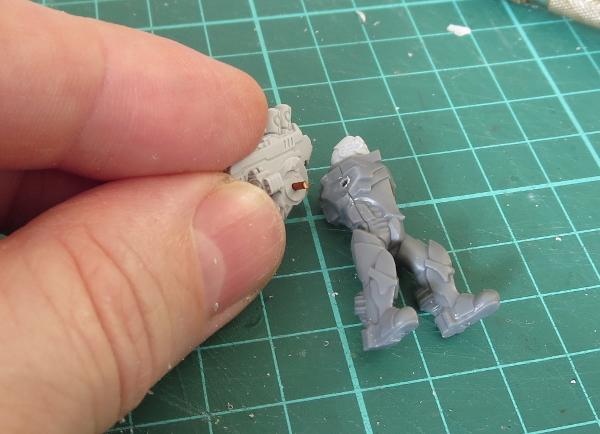 Some people like to use paperclips as a source of wire for pinning. I wouldn't recommend this, as superglue tends to stick rather poorly to stainless steel. Thin copper or galvanised wire, or brass rod are the best options for a secure bond.

With well-maintained moulds and some clever part break-ups, the resin models for Maelstrom's Edge go together with no real need for gap filling. If you're converting models, though, you can sometimes wind up with the odd gap or slip of the saw that needs some filling in. Kneadatite (usually referred to simply as 'Green Stuff') is your friend here. This is a two-part modeling putty than comes with a blue part and a yellow part. You mix together equal parts of each colour and then use the resultant green goo to fill in holes or sculpt extra detail. This is all a little more involved than will fit into this article, but I'll put together a 'Green Stuff Basics' article in the near future. 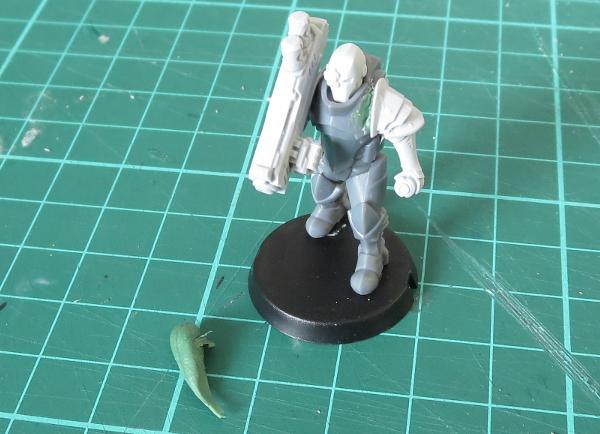 All the pretty colours...

There is no particularly special treatment required for painting resin models. Normal acrylic model paints will do just fine. A light spray coat of primer will help the paint adhere, and gives you a flat base colour to work with, which is particularly important when you have a mix of resin and plastic models (or converted models with mixed components or green stuff involved) and want to keep your army colours consistent. You may also want to finish with a coat of sealer to protect your paintjob, although resin tends to hold the paint about as well as plastics, and so isn't as prone to the edge wear from handling that tends to be a feature of well-used metal models. 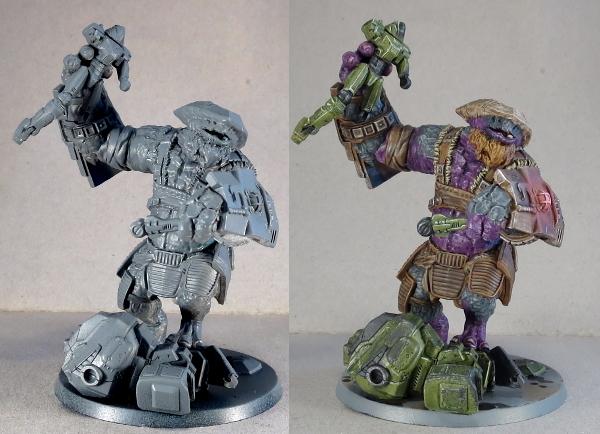 You're viewing a weblog entry titled Modeling 101 - Working with resin models. If you like this entry you might want to: