Wargames Atlantic have been releasing a steady stream of assorted plastic miniature kits over the last little while, and amongst their recent releases was a box of 'Einherjar' - space dwarves! I couldn't resist picking up a box to have a tinker with, and while most of them will probably be built as intended just because they're great models, I thought it would be fun to build something from them that fit in a little better on the Edge, and so came up with these: Trogyl Scouts! 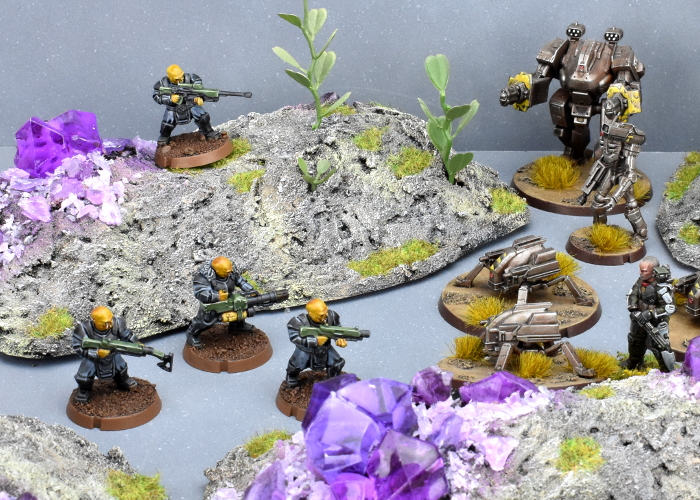 As mentioned above, the base for this conversion was the Einherjar kit. The kit comes with several weapon options, and different (suitably Dwarfy) head designs, but I wanted something alien, instead. Turning to the Maelstrom's Edge Broken kit, I chose the fanged head, which has an open and closed mouth variant, so they don't all wind up identical. 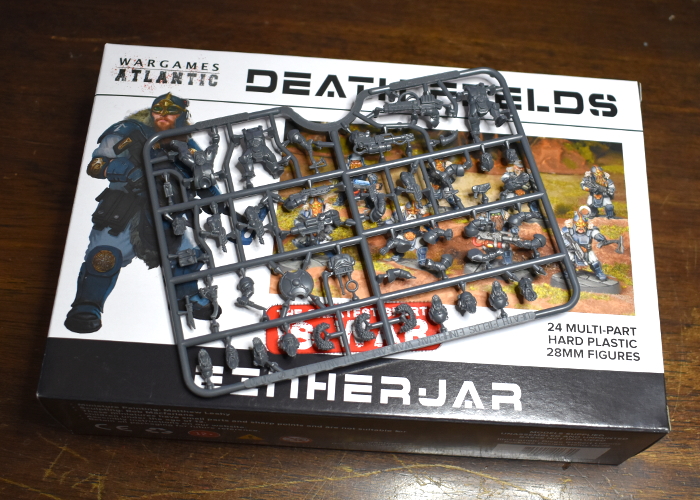 I didn't bother documenting the assembly, as it was pretty straightforward: Everything except the head was assembled as normal. The necks on the Broken models have a longer ball joint and a deeper socket on the torso for it, so I had the choice of either trimming down the necks on the alien heads, or drilling out the necks on the Einherjar torsos. I went with the latter, using a 2mm drill bit to make a deep enough hole for the alien heads to slot in neatly. 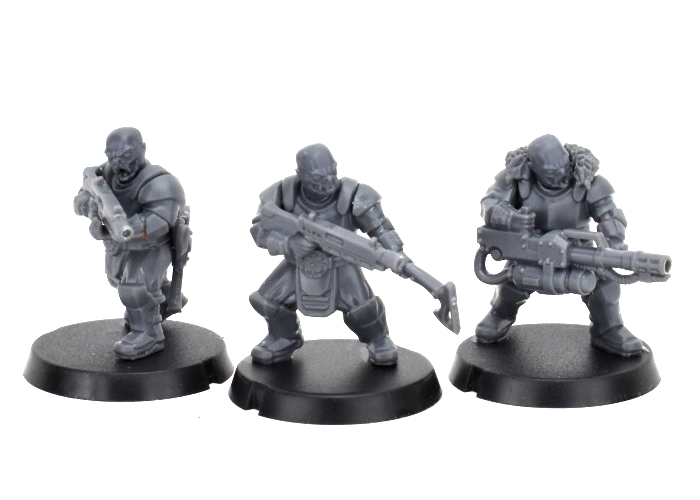 For comparison, here's a scale shot with Drinky McStagger of the Broken, and Trooper Anonymicus of the Epirian SecDef: 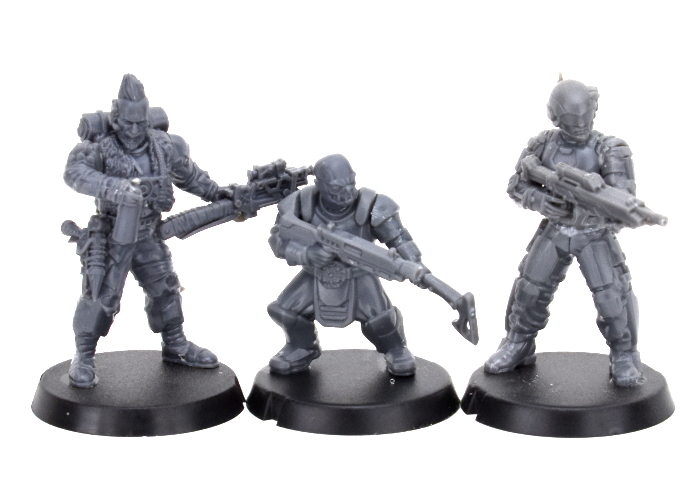 I envisaged this unit as being fairly stealthy, so wanted their uniforms to be nondescript. I started out with a basecoat of Army Painter Wolf Grey, then went over the exposed skin with Citadel Iyanden Darksun, weapon casings and pouches with Army Painter Army Green and armour plates and other metal areas with Vallejo Basalt Grey. The green was then washed with Army Painter Military Shader, and the grey areas with Army Painter Dark Tone. Over the yellow, I added a coat of P3 Cygnus Yellow, and then added a light drybrush of the yellow mixed with some white over the face and knuckles, before adding a layer of Army Painter Flesh Wash. The armour plates then received a light highlight with Vallejo Light Grey on upper edges, and the green areas a similar treatment with Coat D'Arms Putrid Green. 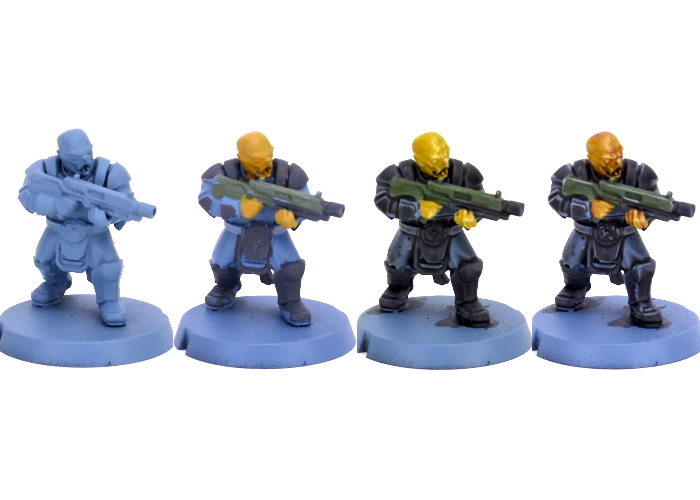 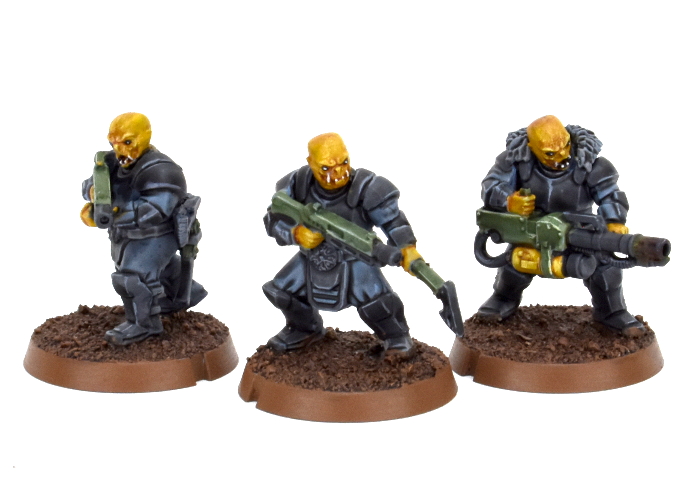 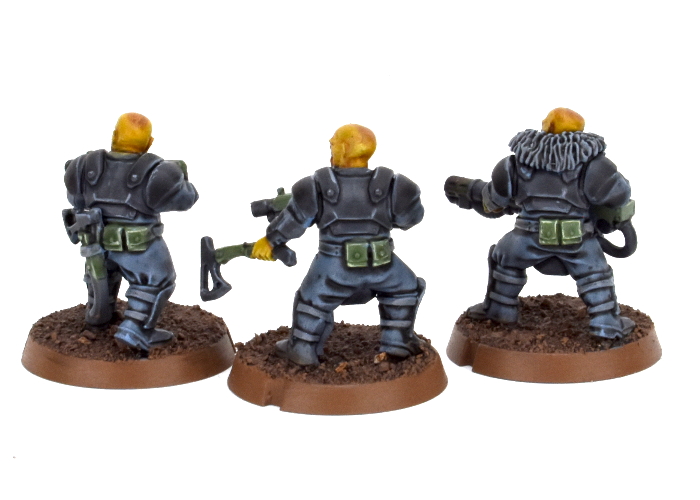 Since they're intended to be a scout unit, I couldn't resist adding in a sniper option as well, either to replace the flamethrower or as a unit-wide upgrade (I haven't decided yet!). I used a rifle from the Epirian SecDef kit, trimming off the shoulder stock and gluing it onto one of the Einherjar rifle arms with the weapon trimmed off just in front of the stock. 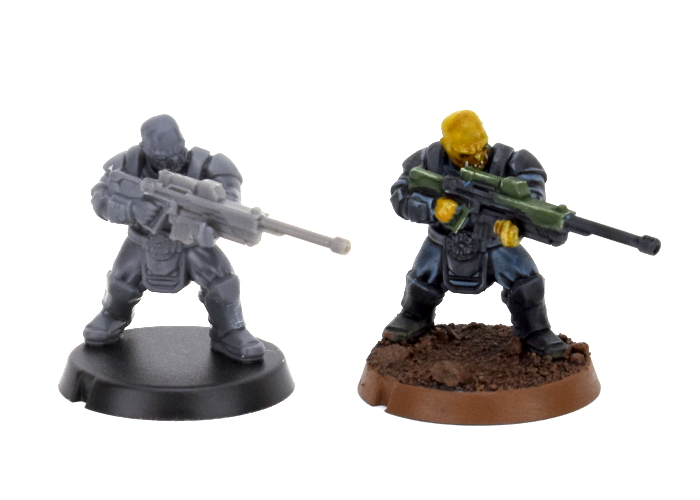 The next step will be to work up some (unofficial, obviously!) rules for these chaps. I'm thinking of a Mercenary-type faction, that can be 'hired' by any of the other factions, possibly using up two non-Core slots for the privilege. More on this once I can get something written up and tested on the table a little!

If you're running short on plastic fodder, you can pick up the full Maelstrom's Edge range from the webstore here.

You're viewing a weblog entry titled Kitbash Spotlight: Trogyl Scouts!. If you like this entry you might want to: