Metal and concrete buildings are all well and good, but I thought it might be fun to build something a little shinier for a change. Nothing says 'futuristic city' quite like mirrored-glass-wall buildings, after all!

I've had a play in the past with some clear plastic and mirror-effect sprays, without managing to achieve the effect I was after. Then I came across some lovely, shiny silver card in a discount store, and an idea was hatched. 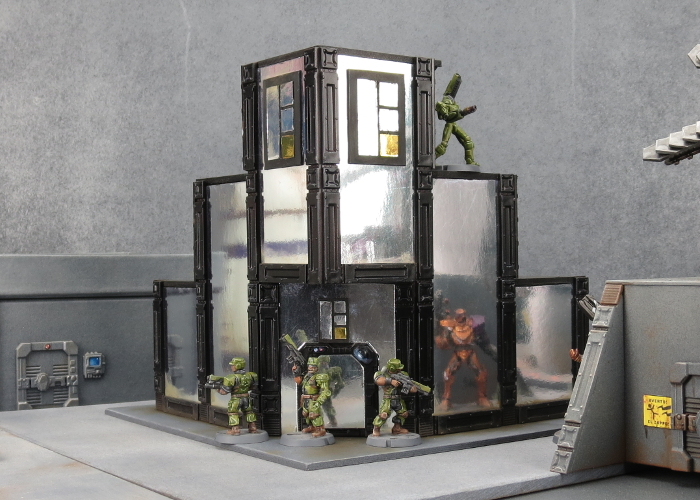 The basic idea was to make a structure out of 5mm foamcore, using the support struts from the Maelstrom's Edge terrain sprue to form a framework to hold the cardboard. I started by plotting out a rough design using a bunch of struts trimmed to appropriate lengths, so I could get the foamcore dimensions correct. 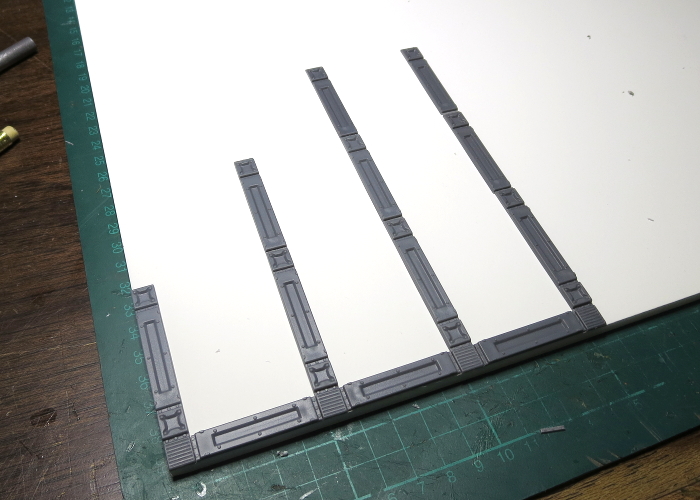 After marking out the wall dimensions on the formcore, I cut them out using an exacto knife and a steel ruler. 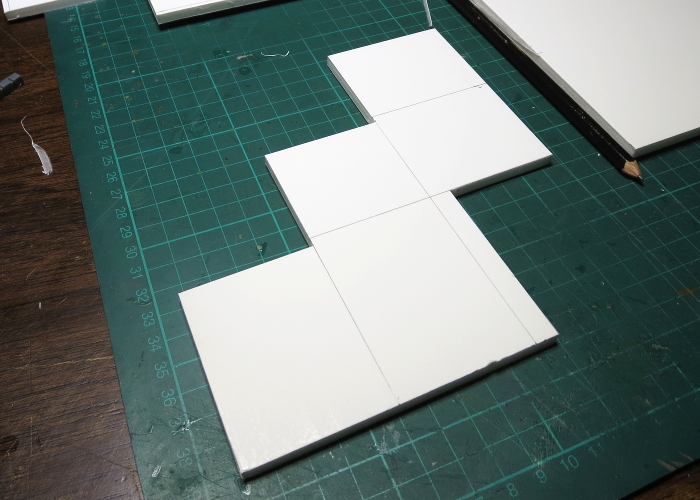 I made a base for the structure from two stacked squares of 2mm foamed PVC. The upper, smaller square created a framework for the foamcore to sit up against, to ensure the building was square and give it some extra strength. 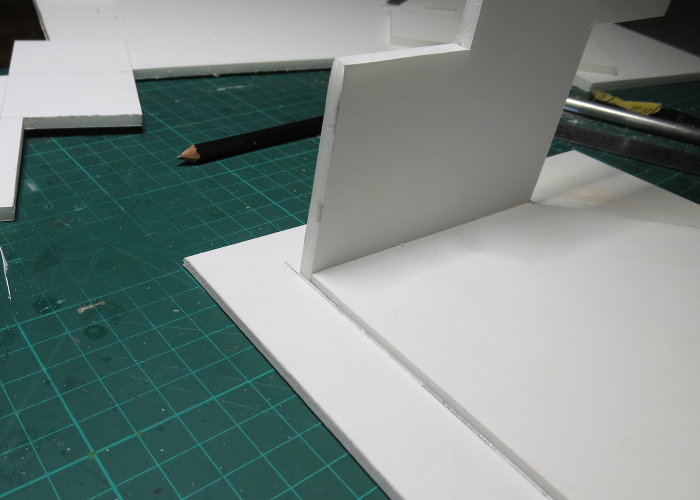 With the outer wall constructed, I added some reinforcement on the inside corners using some offcuts of PVC. 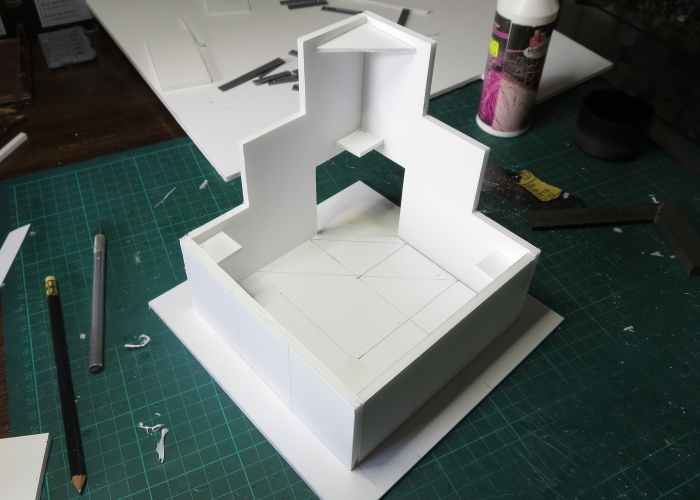 To create the framework for the card to slide into, I glued 5mm plasticard strips onto the walls, tracing the pattern of the support struts. 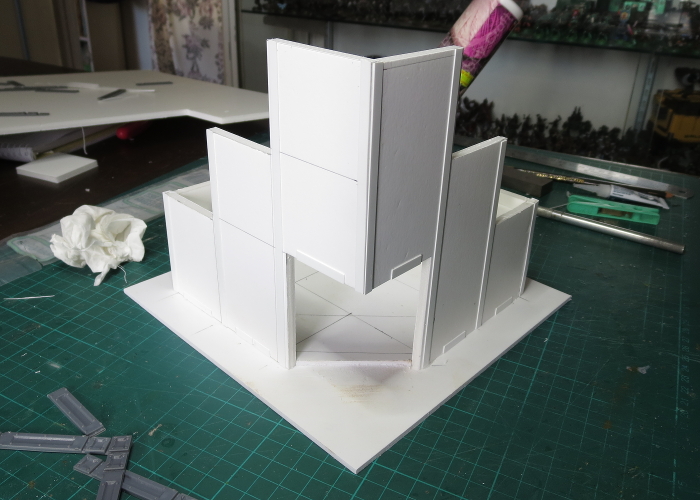 The strips are narrower than the struts, so with the strut centered on the strip a 1mm overhang was created on each side. 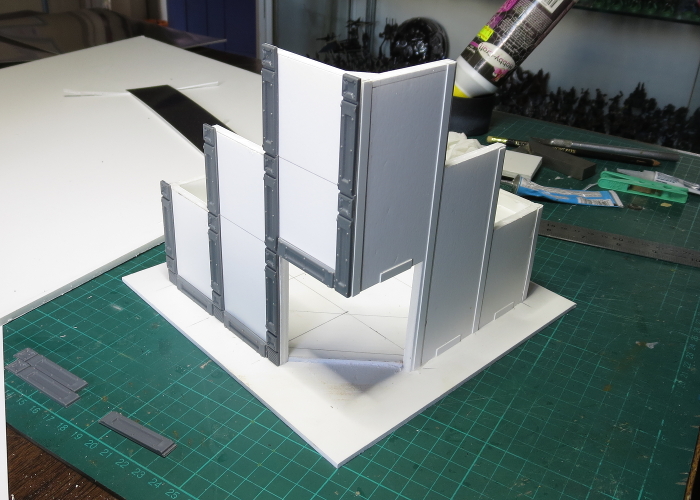 To help avoid the building just being a boring, square box, I left a cutaway to allow for an angled doorway. To fill this in, I cut a square of foamcore to fit across the opening, and cut a rectangle out for a door from the terrain sprue. 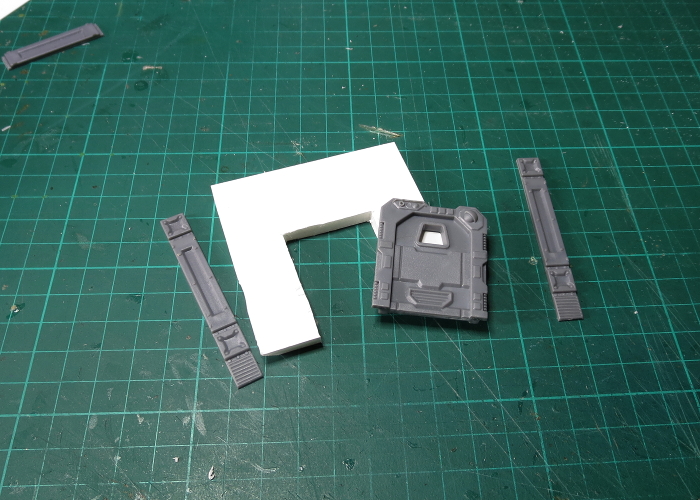 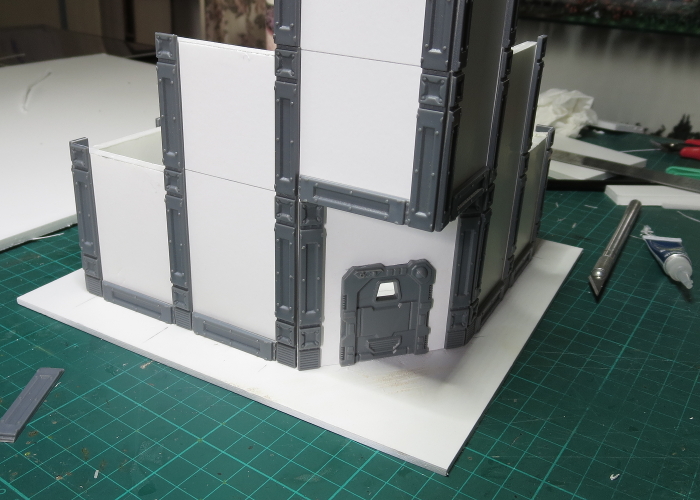 With the wall structure complete, I started building up the roof layers with some more PVC, cut to overhang the walls just slightly to close off the tops of the card slots. These weren't glued in place yet - that had to wait until the card was in place. 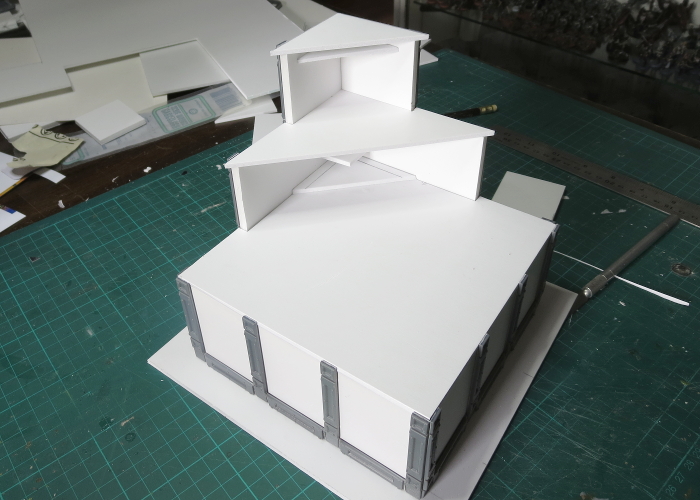 I joined the three roof levels together using angled pieces of PVC. This served the dual purpose of giving the roof an interesting shape, and also making the whole roof structure into a single piece that could be lifted on and off, which would be easier for painting than separate pieces. 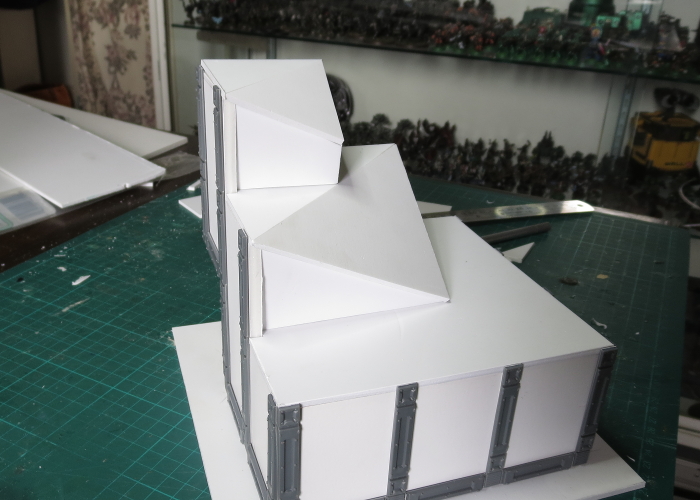 At this point, it was time to paint! I decided to keep it fairly simple, as the main focus on this building was going to be the mirrored walls. I gave the whole exterior a base coat of AK Interactive Rust spray, and then a layer of a satin black spraypaint, leaving the rust in the crevasses for some natural weathering. 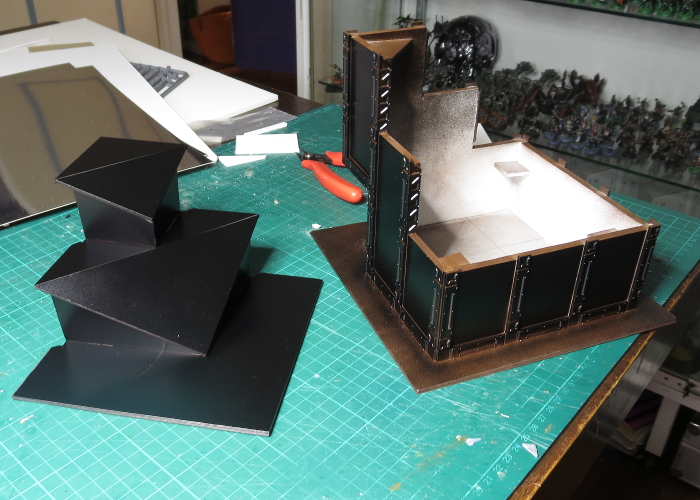 When the spray had dried, I cut strips of the silver card to fit into each of the wall slots. 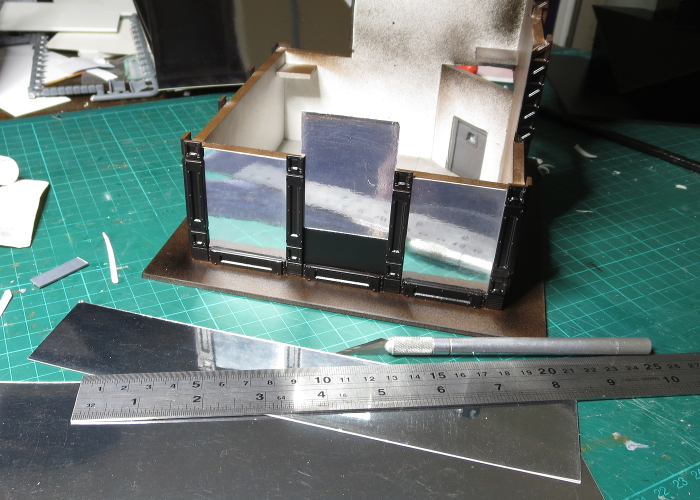 Once all the strips were in place, I glued the roof on top. 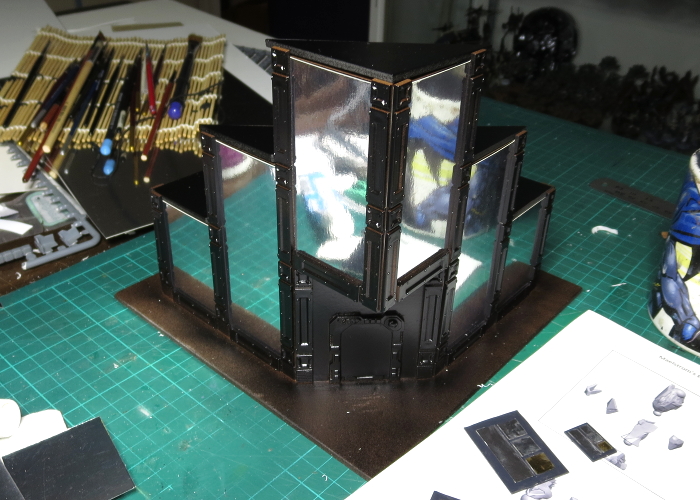 For the final detailing, I painted the base with Vallejo Neutral Grey, drybrushed with Vallejo Light Grey. I also gave the black a light drybrush with the light grey, and then added some dirt weathering with Vallejo Beasty Brown. I also added some signage, with Epirian logos made from strips of the silver card and some gold card from the same pack for the 'yellow' lower squares. All ready for the table! 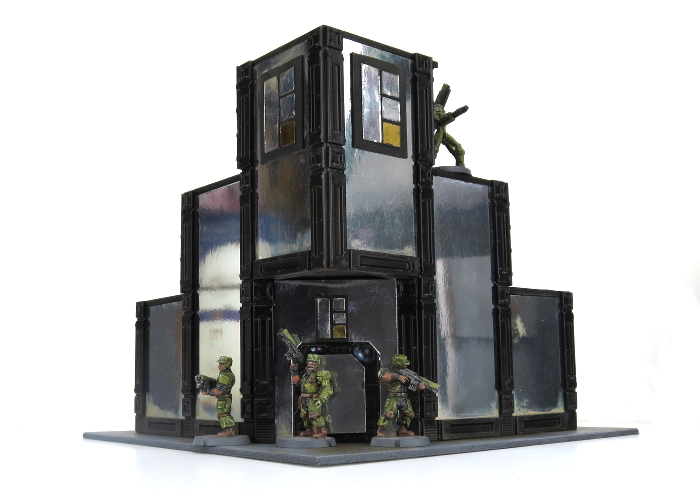 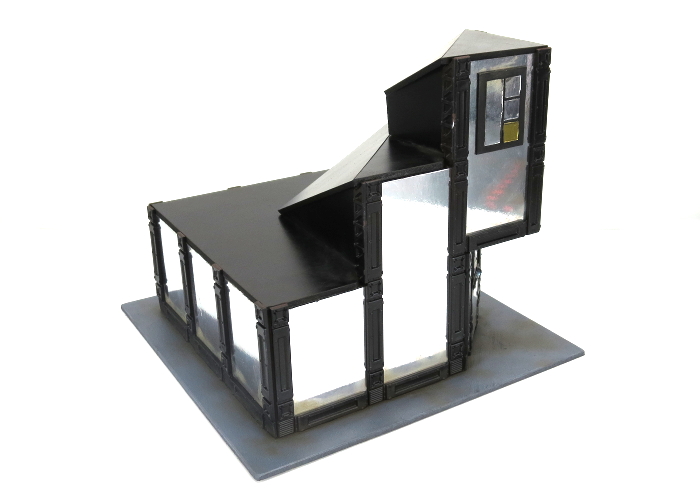 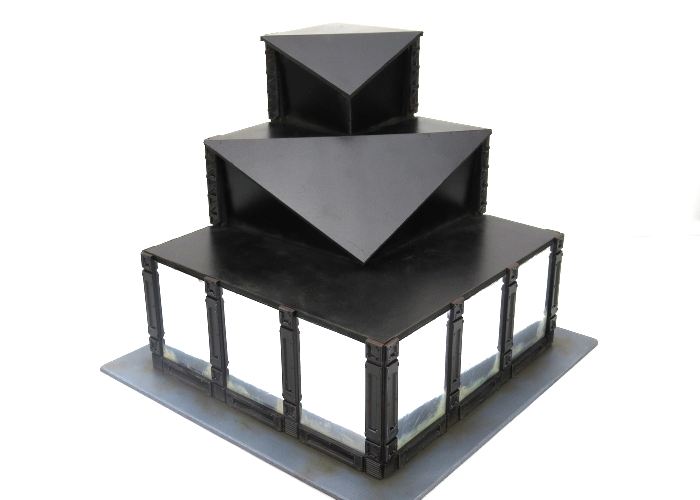 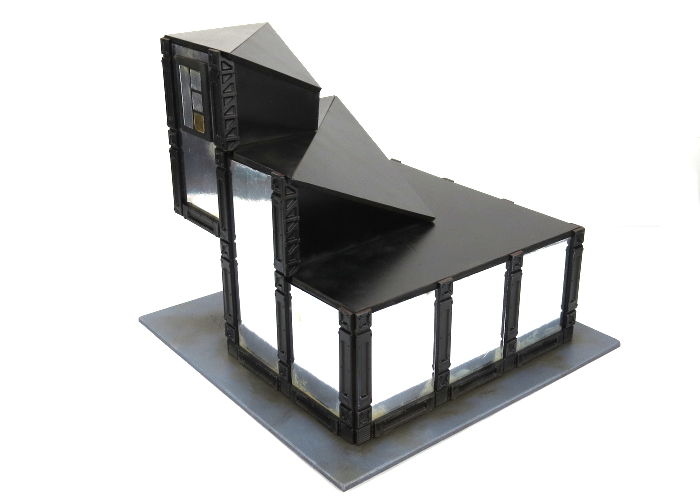 You're viewing a weblog entry titled Terrain Spotlight: Mirrored Glass Building. If you like this entry you might want to: