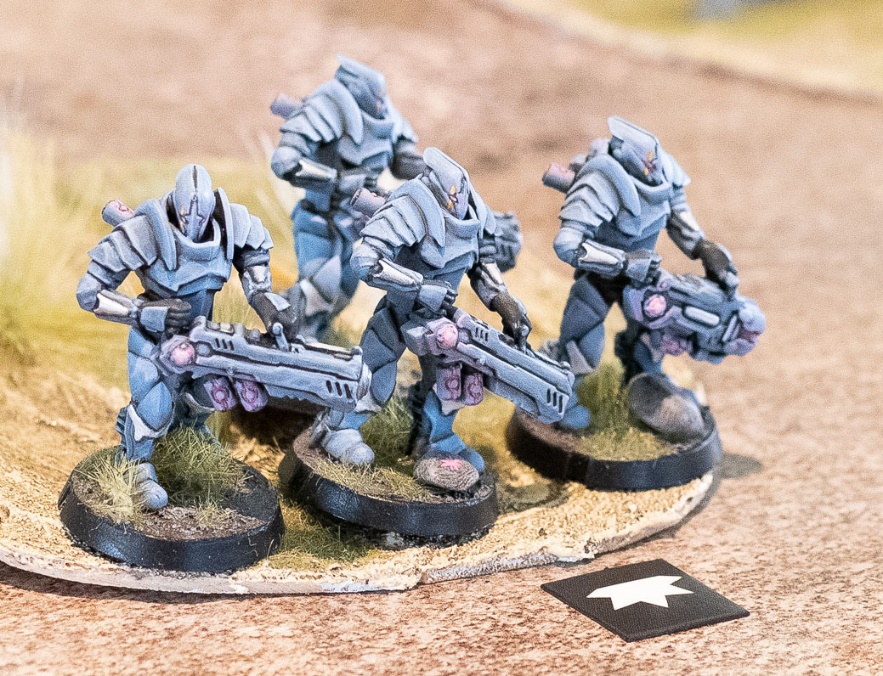 No one saw them coming: the warriors in their smooth armoured plating, accompanied by the beautiful yet horrible Angels. They took the abandoned and dilapidated production facility at Argos, killing the few patrolling Contractors without mercy. A hastily assembled Epirian contingent, including a powerful Hunter Warmech and a squad of elite SecDef, arrived on the scene the next day to root out the zealot strike force. These Maelstrom-worshipping crackpots were about to pay dearly for their boldness.

This game sees an Epirian force commanded by Iain take to the field against a Karist incursion led by Jon. The mission is Groundfall, which has the Alpha Strike and Territories objectives. Points are gained by destroying enemy units and by capturing the 5 territory markers scattered across the board. Deployment was determined to be in opposing L-shapes: Karist bottom right, Epirian top left. The Karists have easy access to 3 of the 5 territory markers. Uphill battle for the Epirian side?

The Epirian commander wastes no time: Firefly drones zoom up the compound to take stock of the situation and drive out the Karist vanguard. Immediately they spot the biggest threat in the Karist force: a mature Angel. The huge beast seems all but immune to their laser attacks, however. 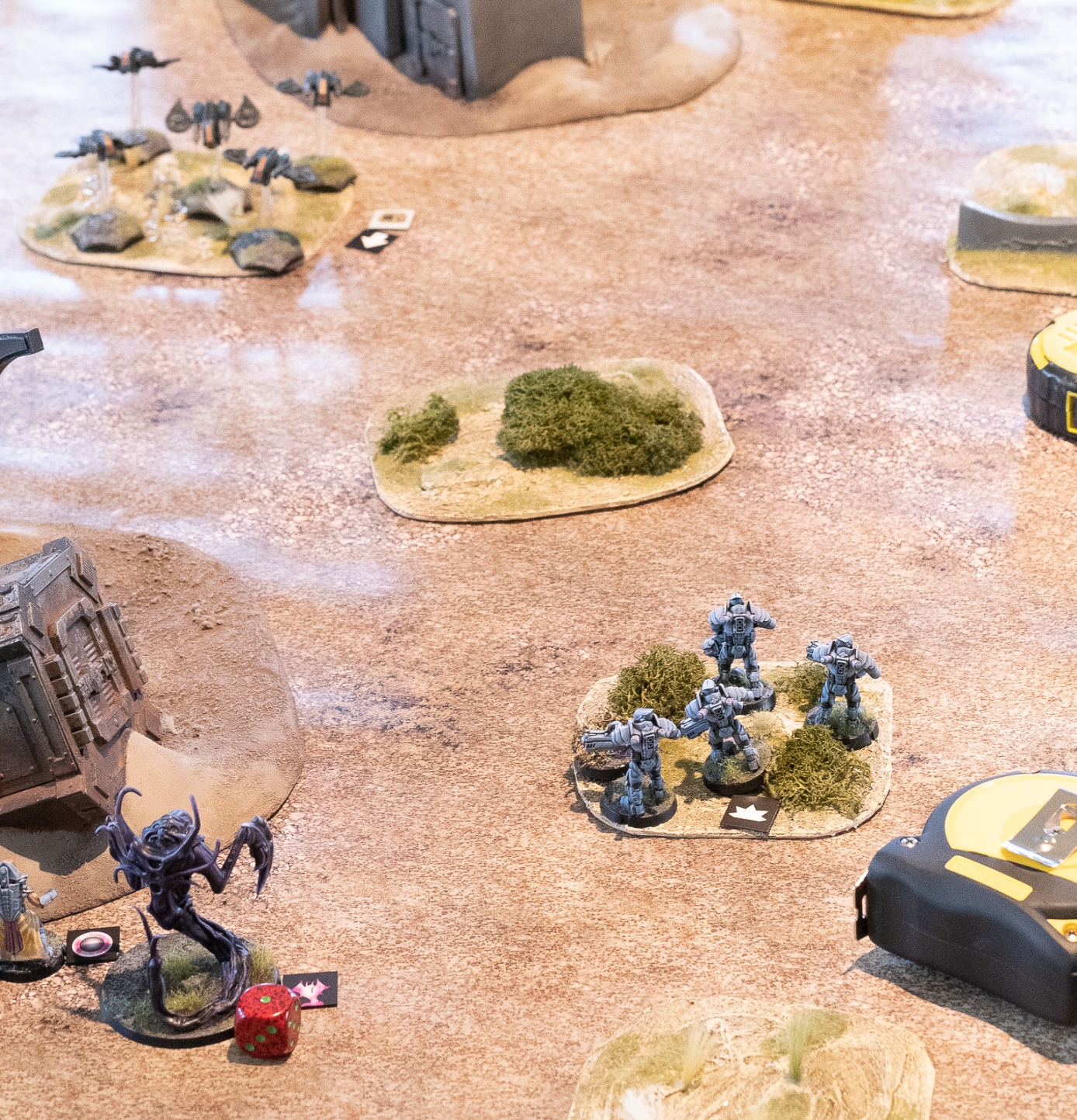 The Firefly Drones fly up the field but only manage to suppress the Mature Angel.

Elite Karist Tempests respond immediately, heavily damaging the Hunter Warmech with their Ravager Vulcan Pulse Cannons. The Angel also responds to the Epirian attack, taking cover whilst destroying two of the Firefly Drones with her tentacles. 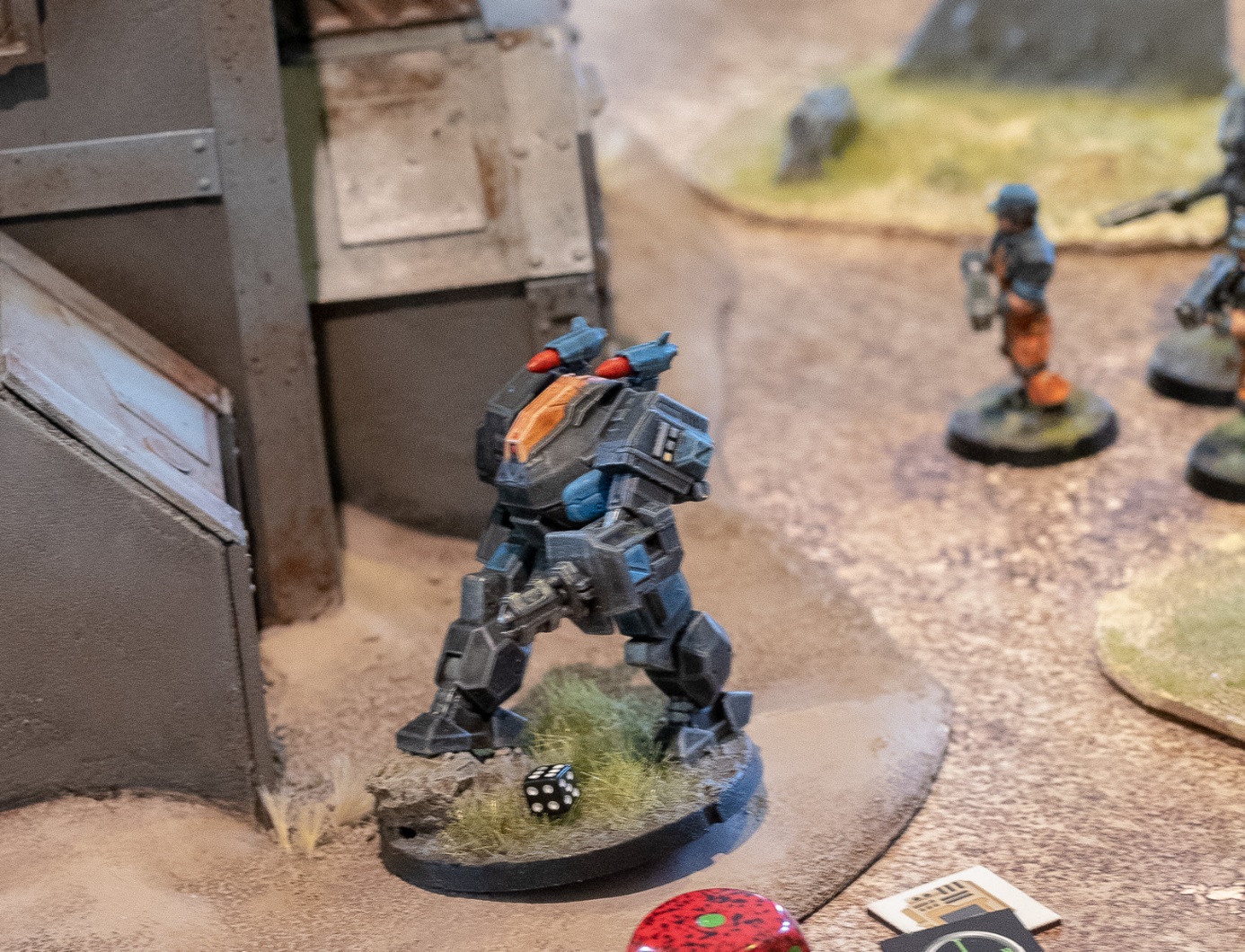 The Hunter takes heavy damage from the Tempests.

Realising the Karist resistance was much stronger than anticipated and finding himself in a bit of a pickle from the get go, the Journeyman projects his mind into the Hunter's damaged shell and returns fire at the Angel in her position of cover. The shooting is ineffective, and the Angel remains unperturbed. 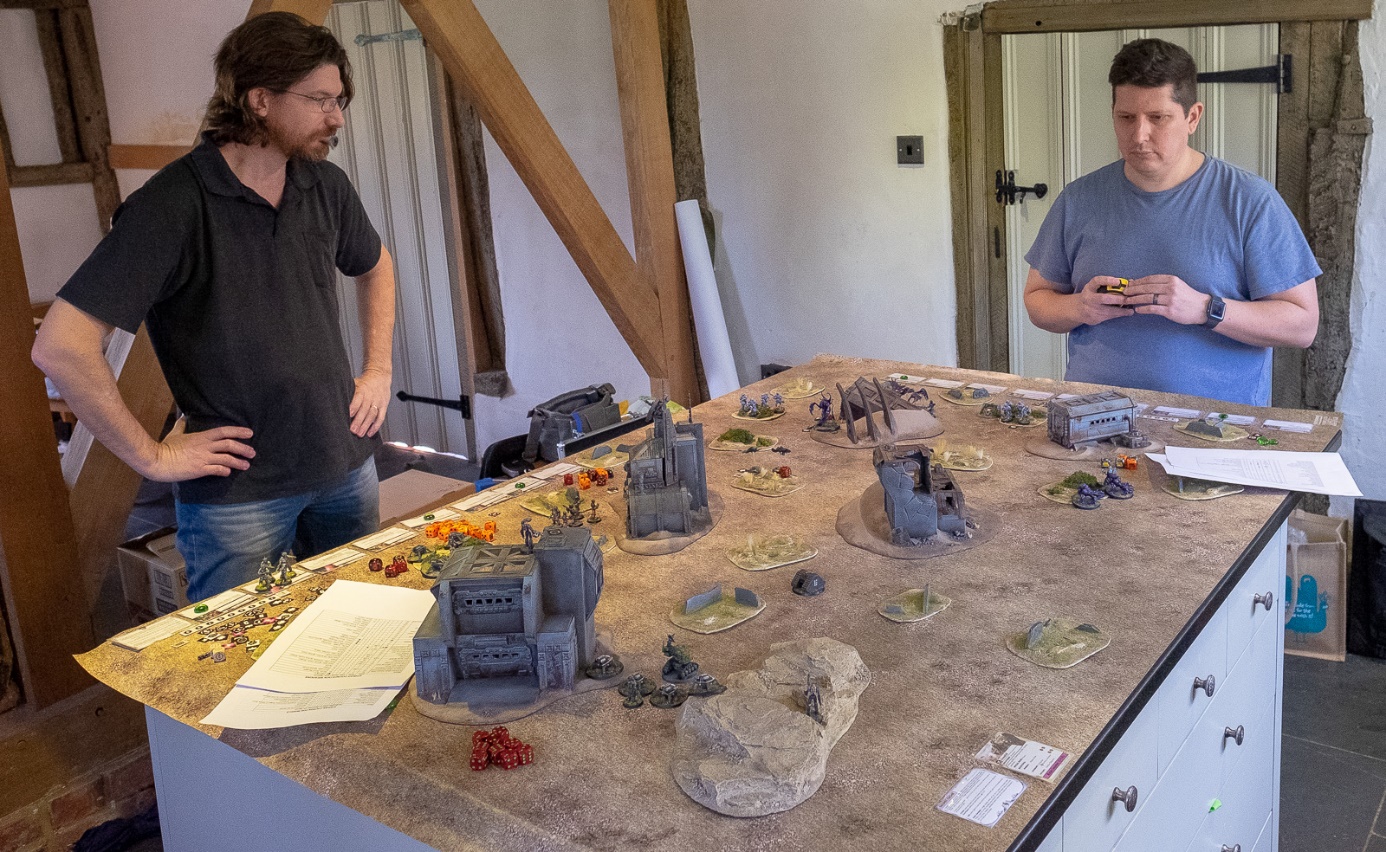 With his toughest asset is compromised, the handler quickly switches to one of his Scarecrow Snipers. The lone bot looses a precision round from its Railrifle into the Angel, hitting the mark this time and visibly hurting the creature. 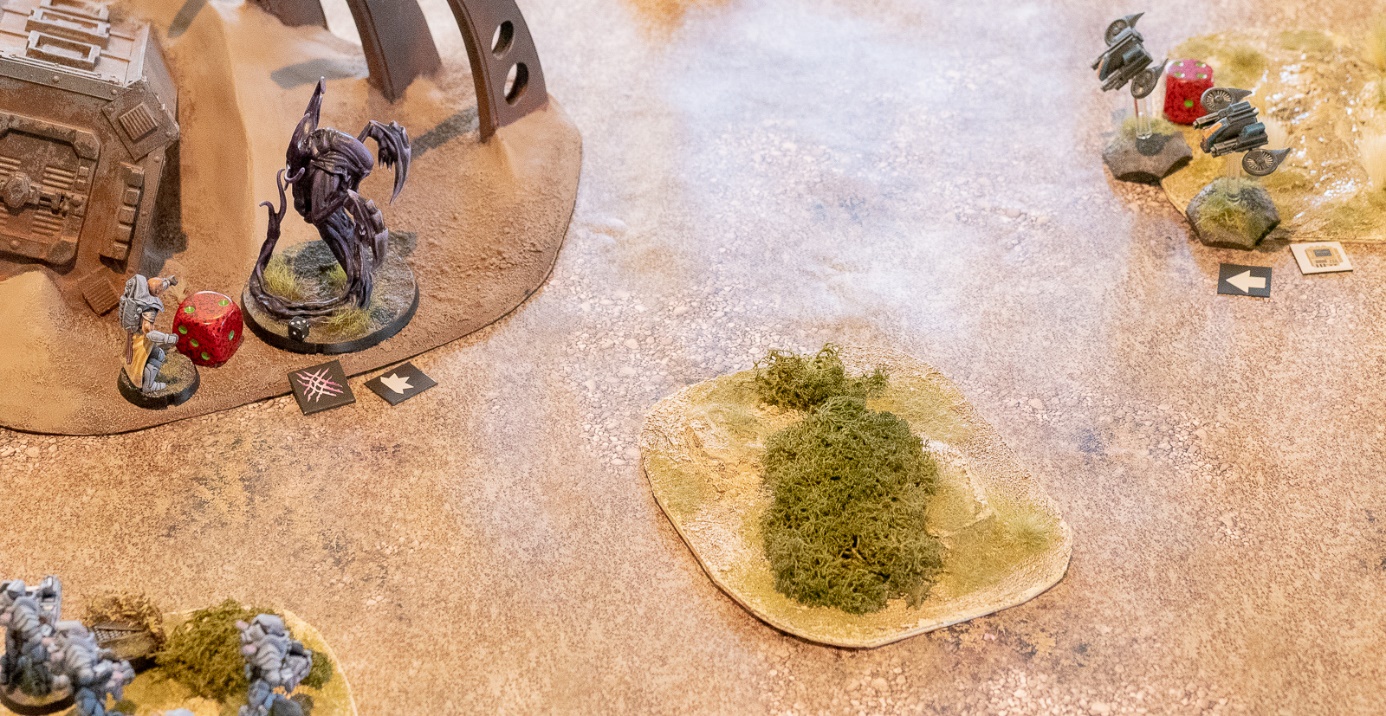 The Angel finally takes damage from the Scarecrow. Their low-shot sniper weapons can literally be hit or miss, but they have huge damage potential.

The Karist Kaddar Nova, witnessing the opening rounds of the engagement, chooses to maintain the momentum and attempt to finish this quickly, dashing out from his position on his own and taking down another Firefly. His troopers nearby follow suit and down another of the now completely hammered squad of Fireflies. His Angel, meanwhile, takes another Railrifle round from a second sniper robot in the distance, and is now badly hurt. The Karist troops need to act fast, as more bots are fast approaching their position and laying down fire on the juvenile angels on the other flank. 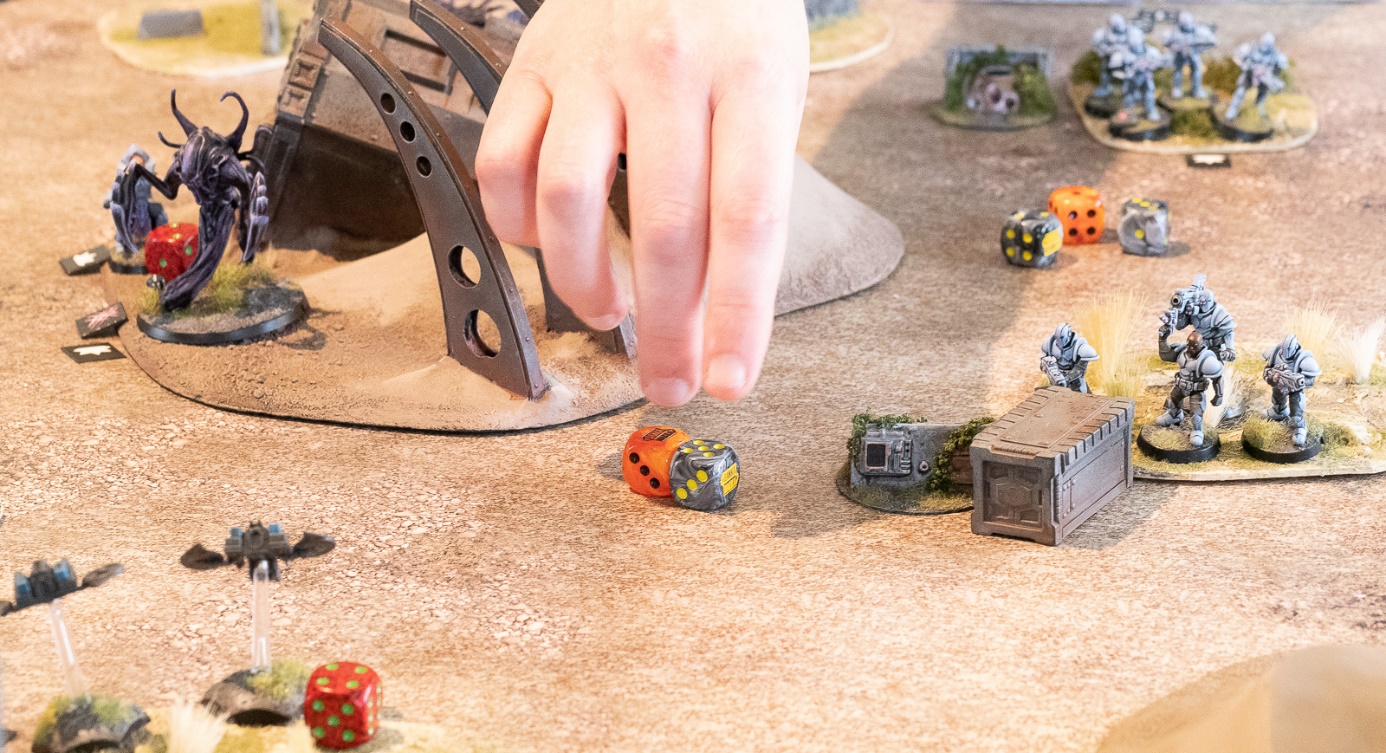 The Karist commander exposes himself, but downs a Firefly, and the nearby troopers destroyed another one. In the Groundfall mission, getting the first kill of the turn is worth a lot of points.

The last Firefly crashes and burns after more Karist troopers lay down a hail of suppressive fire, giving the Enclave the first kill. 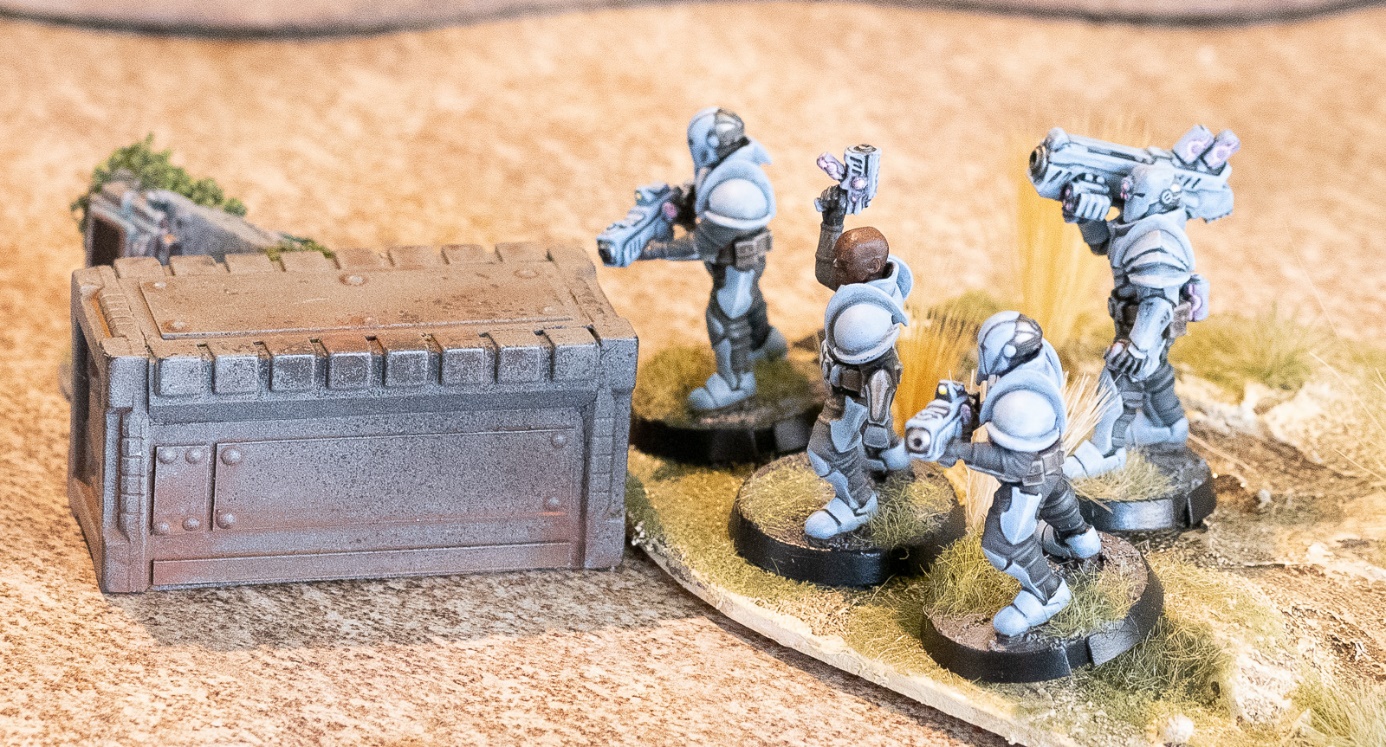 Troopers finish off the fireflies, giving the Karists the crucial first kill.

The Foundation commander, witnessing how the Karists are holding a strong firm and his own forces struggling to get in a dominating position, carefully moves up his remaining force through the compound. The contractors launch a few grenade shells into the Karist line to suppress their fire and buy their robotic comrades some time. 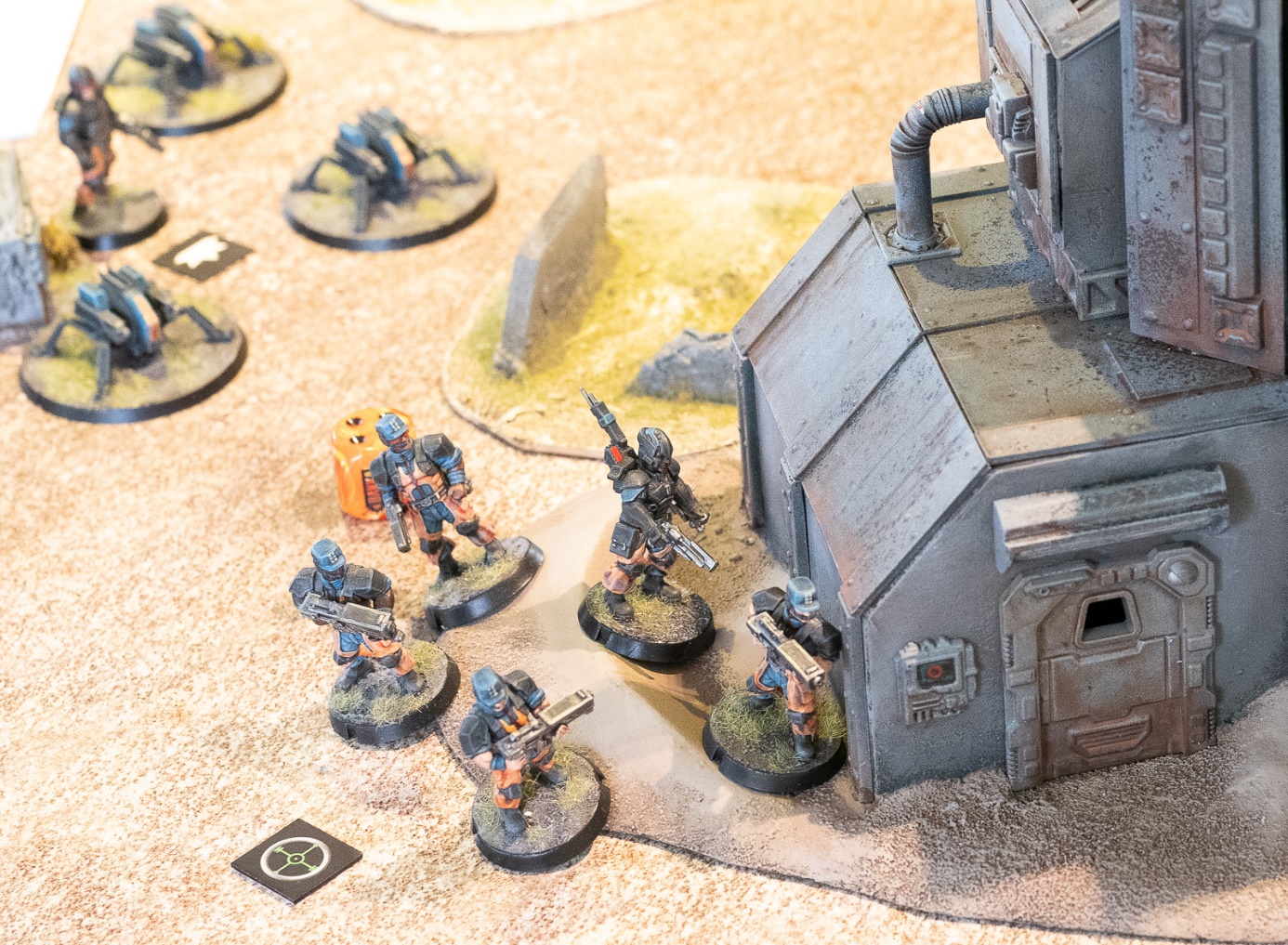 Meanwhile, an enigmatic Shadow Walker rifts into hiding near the Epirian flank, with an eye to neutralising the sniper threat. The Angel Keeper assigned to the contingent of Angels in the force has his Juvenile beasts rain down cybel energy on the advancing Drone force, keeping all eyes off the sinister agent stalking up the flank. 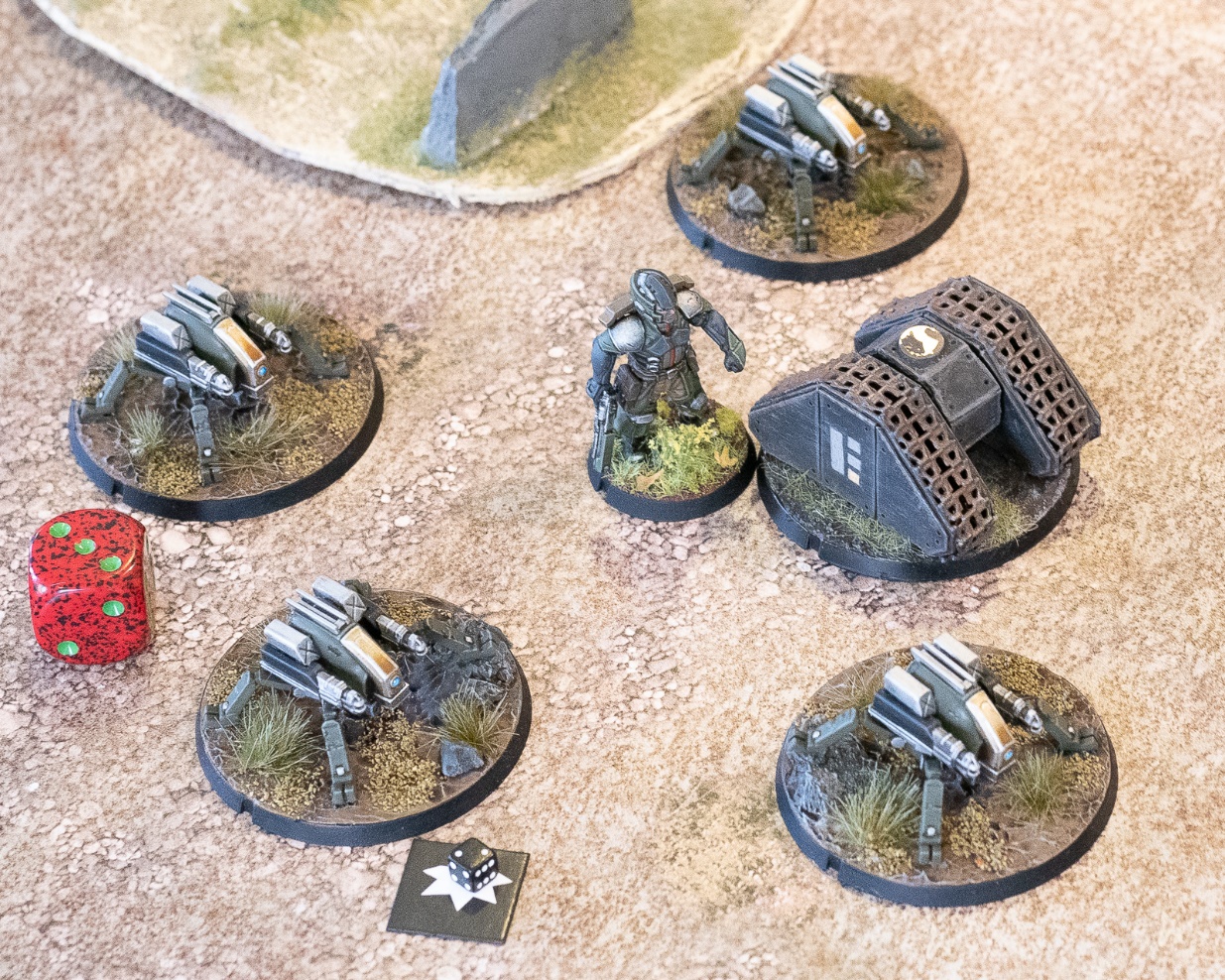 The Spider Drones equipped with flakk guns are too far from the action to contribute, and the Angel Hellblasters aim to keep it that way by suppressing them.

The SecDef sergeant, watching the assault unfold on his transport's screen, sighs deeply as his opinion of robotic forces is once again confirmed. Deciding he needs to show how it's done and he'd better do it now, he signalls for his squad to drop right into the Karist position. Landing with guns blazing, he is pleased to see the nearby Karist Troopers turn their heads in surprise and duck down. 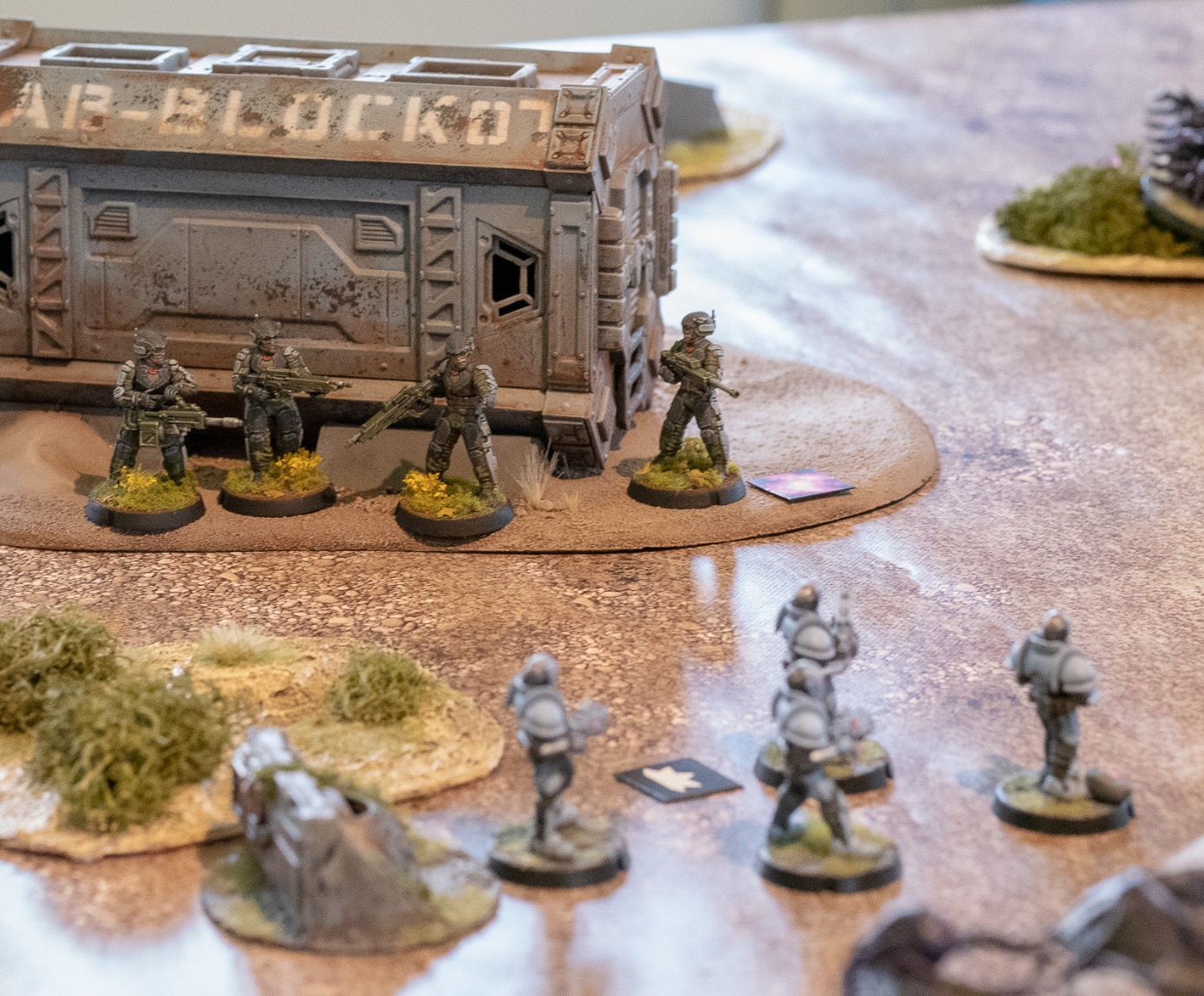 Out of nowhere, though, appears a flock of dark fluttering creatures: Angel minnows on the hunt. They frenziedly fire their cybel pulses at the SecDef landing zone. Even though the SecDef had taken up a safe position in cover, they lose one soldier to this alien assault from above. 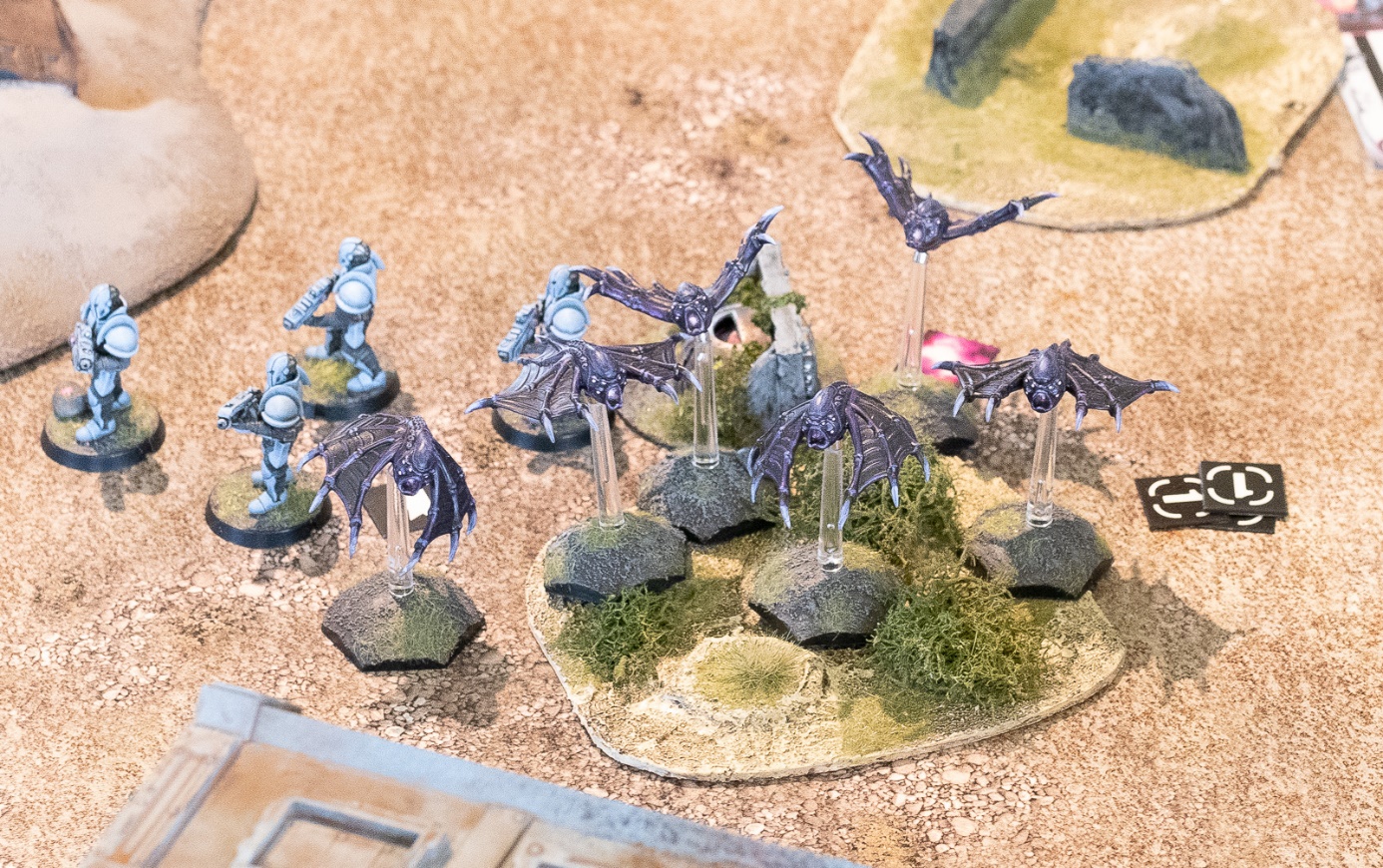 The Minnows move towards and target the SecDef squad that just dropped behind both trooper squads.

The larger Angel, severely weakened by the merciless sniper fire, seems to lose form and suddenly disappears from the fight just as the Hunter's guns ready for another salvo at this most dangerous foe. Moments later the Hunter explodes in a cloud of shrapnel as the Tempest Elites continue their barrage. 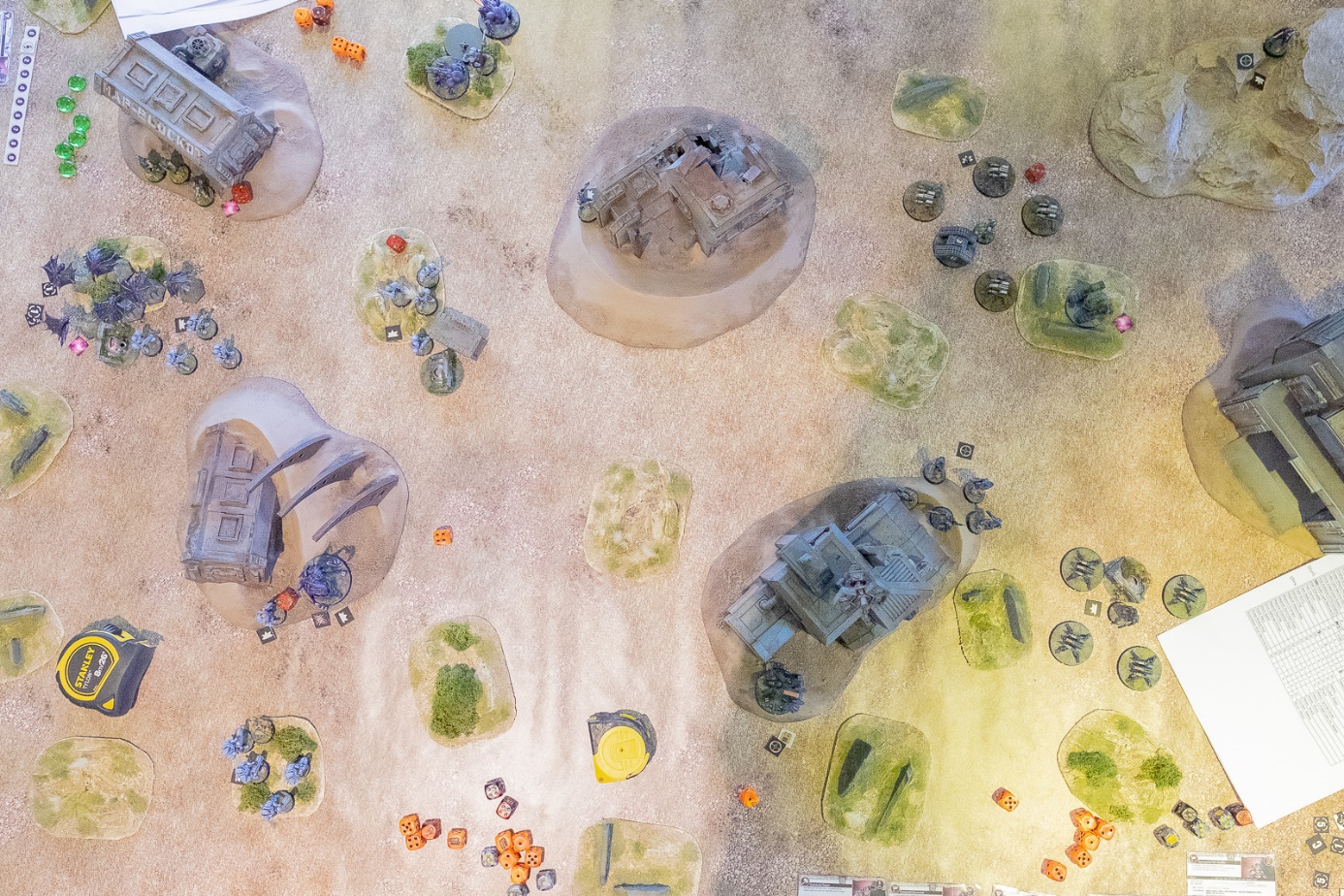 End of the first turn: Jon elects to remove his dangerously wounded Mature Angel in order to deny the Epirians an easy first kill in the coming turn. The Karists hold 3 out of 5 territory objectives, whilst the Epirians have the other two. Iain, having left his damaged hunter on the table, immediately regrets this as the Tempests destroy it in the first action of the second turn and score those valuable first kill points again.

The SecDef realise something needs to happen now. Ignoring the smaller Angels spewing death onto their position, they take aim and down two Karist Troopers, hoping to break the Karist line from the rear. 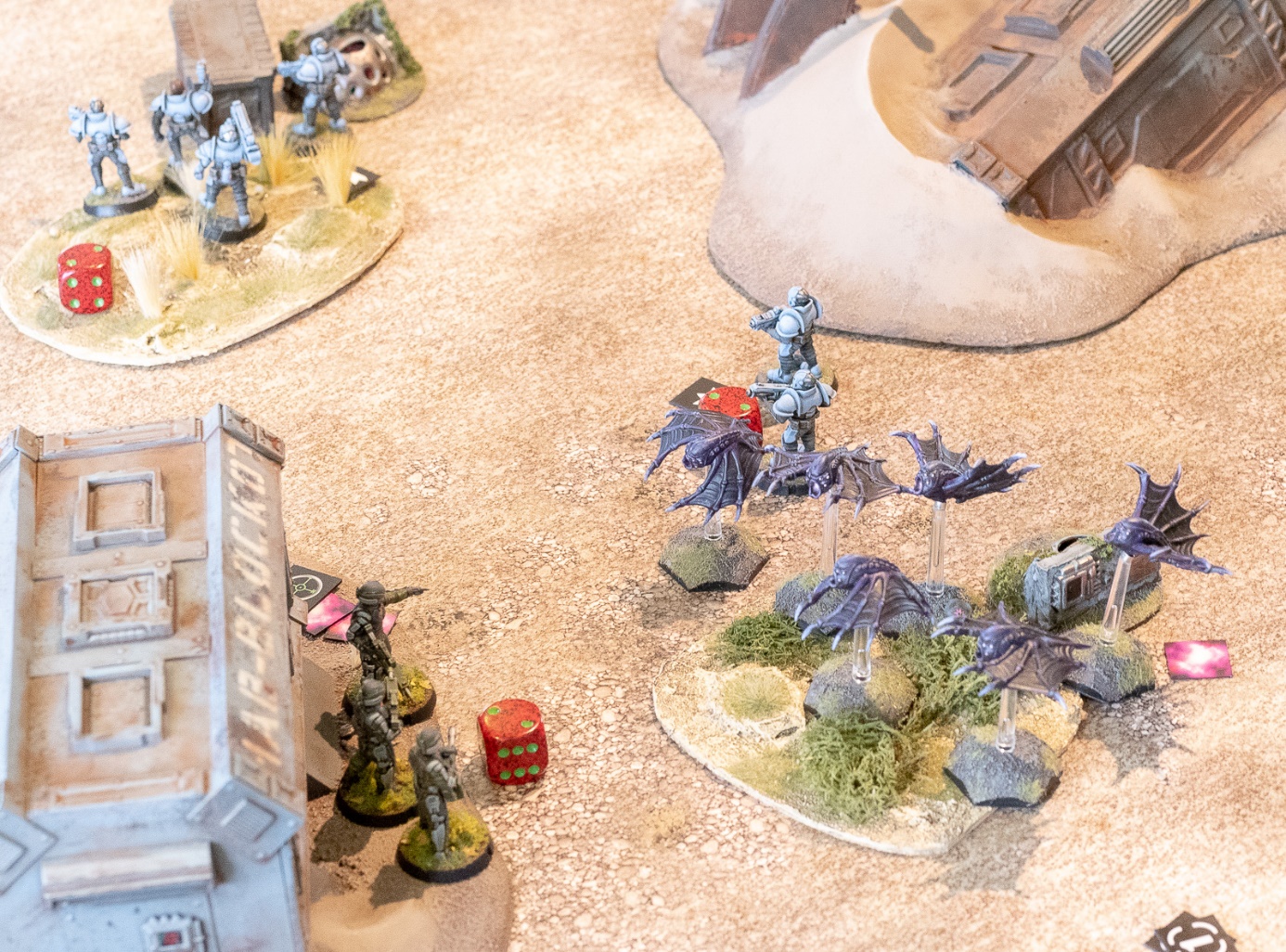 The SecDef are in position to damage various Karist squads, taking advantage of their assault from the rear, but they are in turn dangerously surrounded.

The Journeyman Handler, taking the SecDef's cue, coordinates the fire of his Scarecrow Sniper with the SecDef squad, catching the Karist Troopers in a crossfire that wipes them out. The tables seem to be turning. 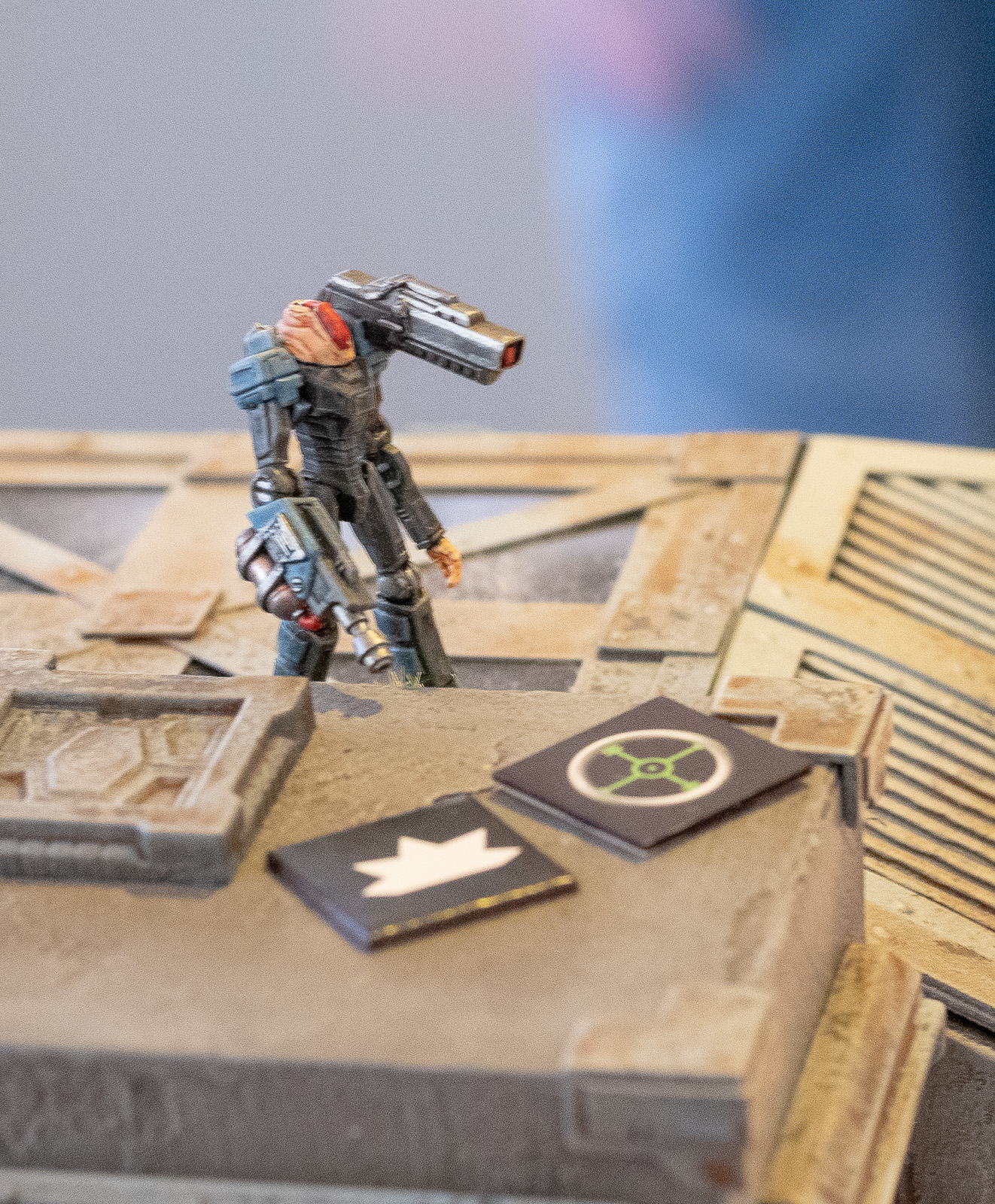 The Scarecrow again shows its potential as it wipes out the remains of a Karist squad.

Ignoring the little Angels would prove a costly mistake, however, as they now came down on the SecDef position. Despite killing several of the flying beasts, the SecDef lose two more soldiers to the pulsing cybel energy, leaving the Sergeant alone to escape the Angel threat and run for cover. 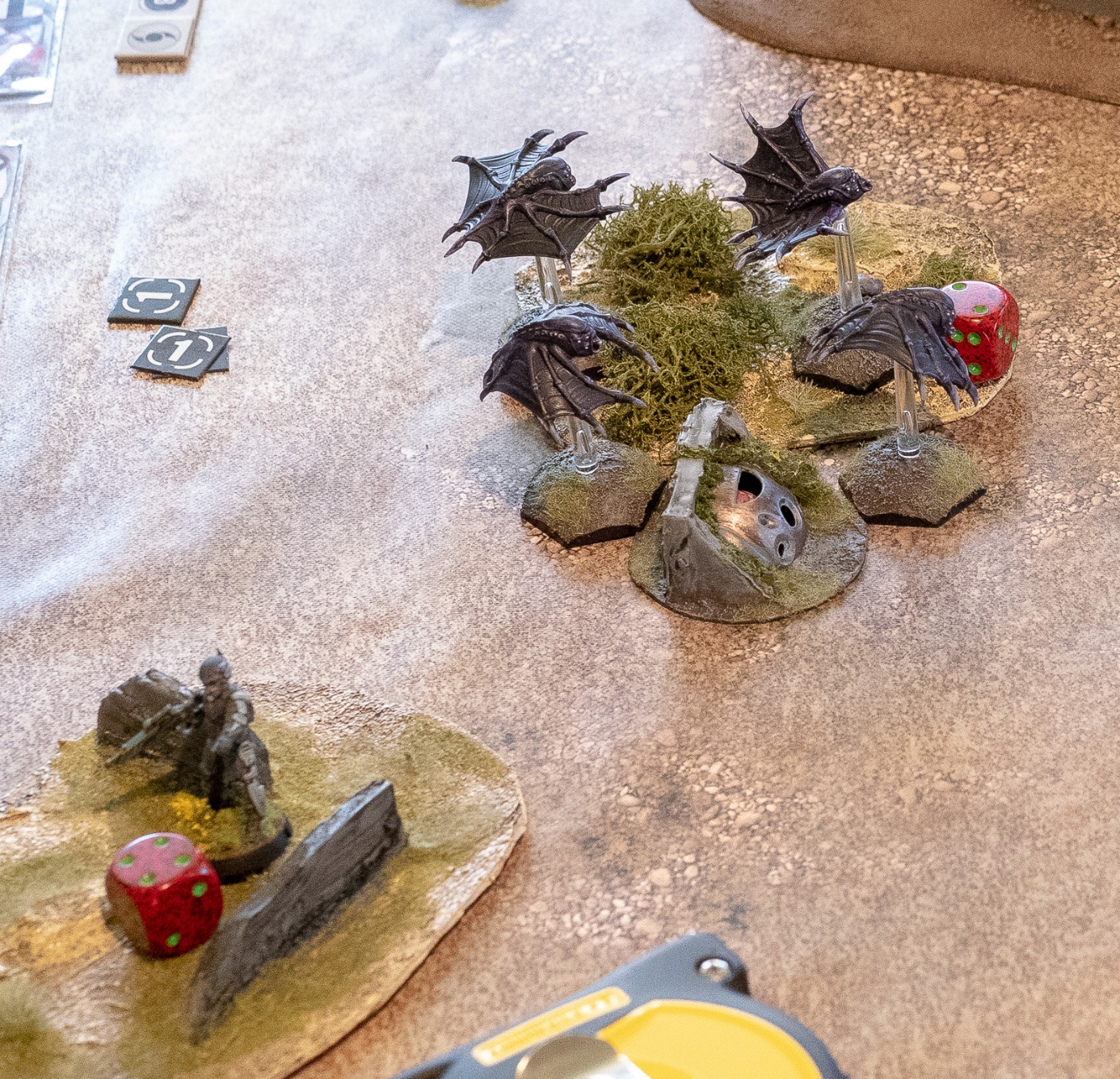 The SecDef sergeant flees from the angry Minnows. Aerial insertion is a powerful ability, but dropping in the middle of the enemy lines comes with certain risks...

The larger Angel Hellblaster also takes a heavy toll as another cybel salvo immolates all of the approaching Spider Drones. The Kaddar Nova, sensing victory and eager to lead by example, dashes forward, emerging from the Karist lines to personally end this heretic assault. 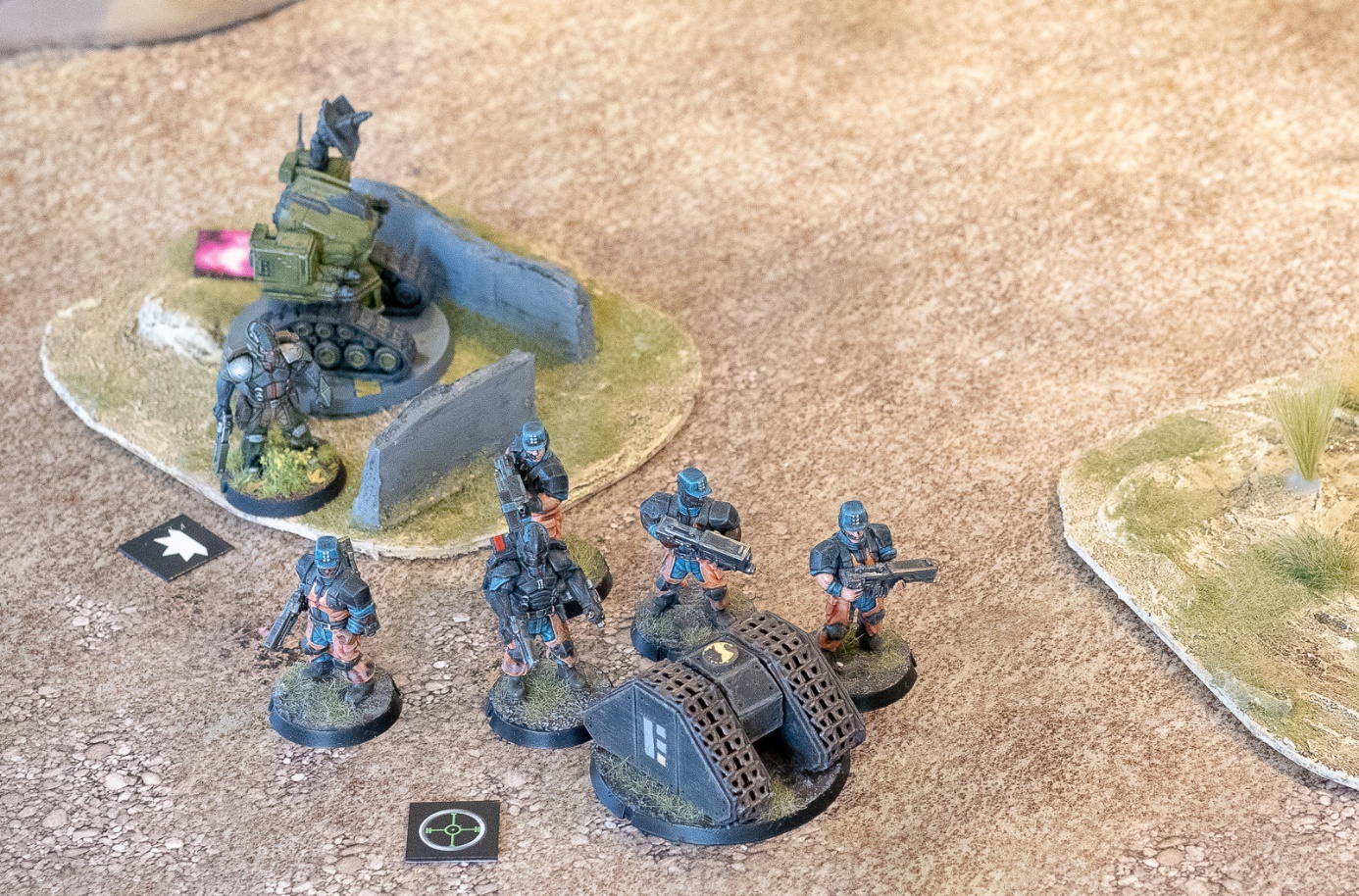 The powerful blasts from the juvenile Angels reduce the Spider Drone squad to just their handler.

Seeing the Karist leader run out and resolved to capitalize on the hole punched in the Karist line by the SecDef's assault, the Journeyman Handler links again to one of the Scarecrow Snipers, dangerously overloading its circuits, in a desperate attempt to deal the deciding blow to the enemy. A precision shot hits the Kaddar Nova square in the chest, ending the priest's heroic ambitions immediately. Surely this would break those crazy zealots! Meanwhile, the contractors move up to secure their end of the compound and open up on the Angel Hellblasters, with little effect. 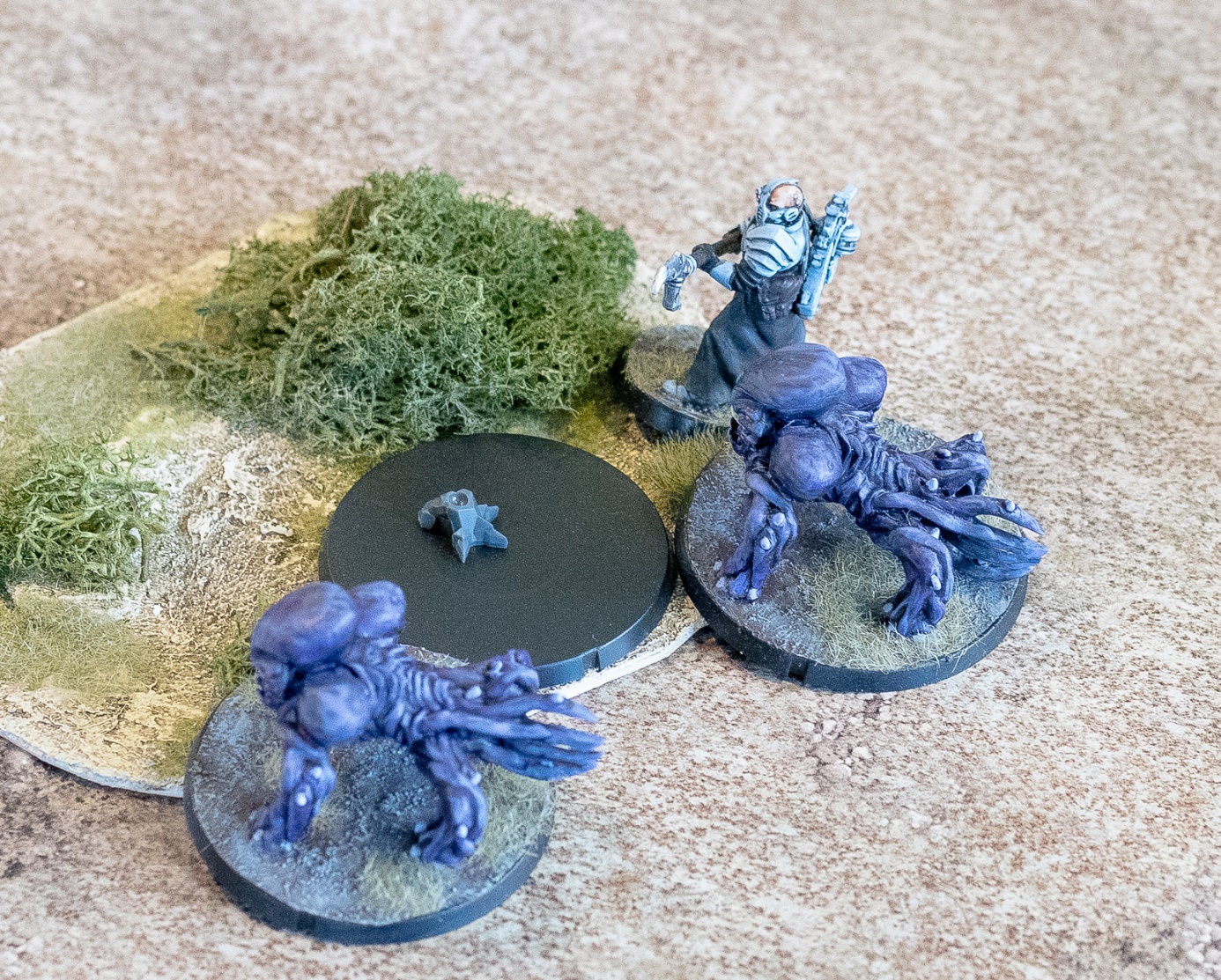 Hellblasters with their Angel Keeper in their position of cover, guarding one of the objectives.

The Shadow Walker rifts up the field once more, cursing the Kaddar Nova's poor timing, but intending to take down the Sniper bots that were wreaking such havoc on his compatriots. His pistol shots glance off the nearest bot, however, as its position is well protected.

Registering this new close-ranged treat, the nearby bots all respond: the flakk guns on the Relay drone opening up and the Sniper bot quickly taking a shot at the advancing enemy agent. The nimble Shadow Walker, however, manages to dodge unscathed through the hail of incoming fire.

Suddenly the terrifying shape of the Mature Angel reappears at the edge of the compound, immediately bearing down on the lone SecDef sergeant. The veteran soldier stands no chance against this alien monster and quickly falls to its slashing attack. 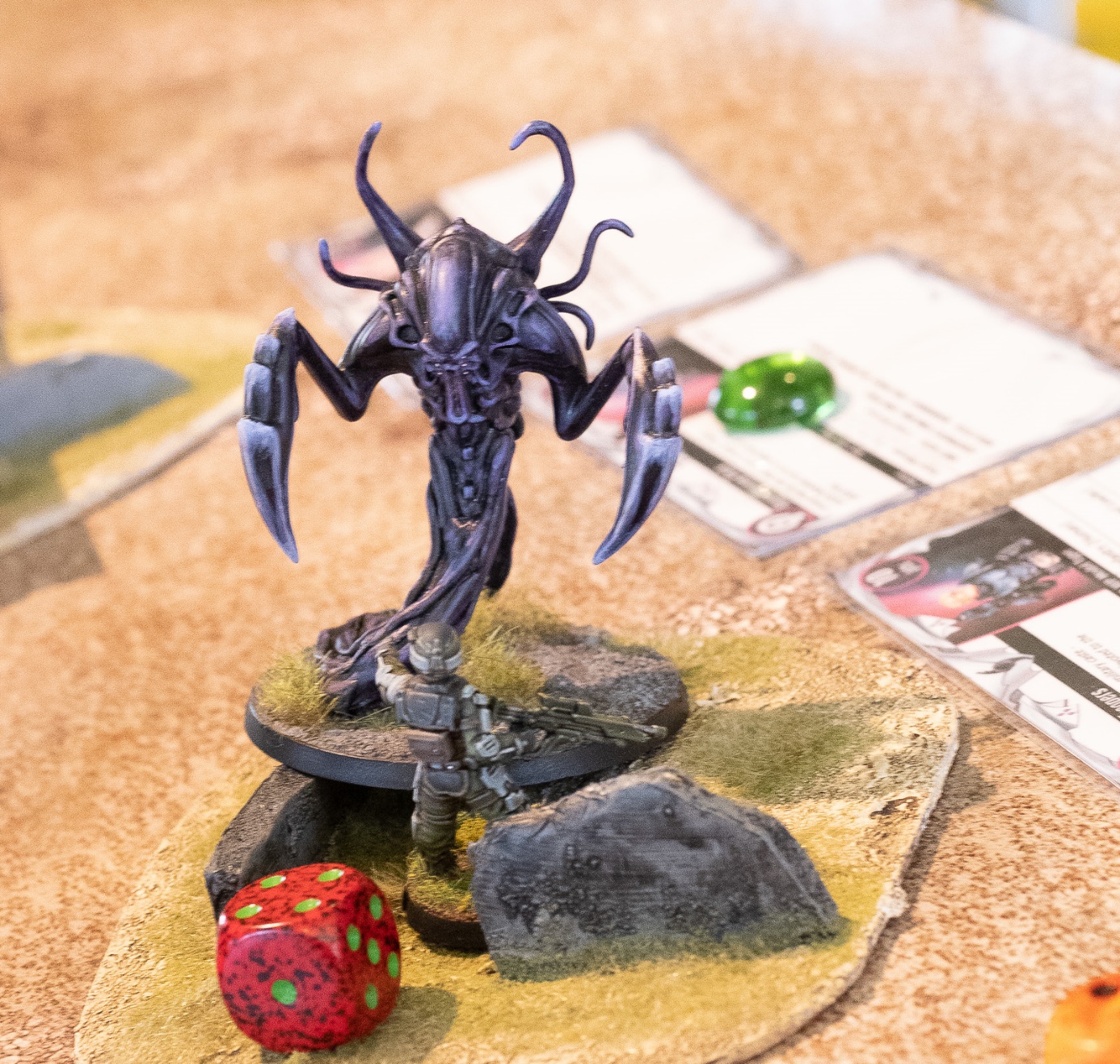 By voluntarily removing the badly damaged Angel earlier in the game, Jon ensured he would have a strong reinforcement to bring on later. She can now come back to finish off another unit, grabbing the Karists enough points to finish the game.

Realising his situation, the Journeyman Handler orders his force to retreat into cover and await further reinforcements. The Karist force remains in control of the compound, for now.

Epilogue: Iain's decision to keep his Spider drones back to hold objectives rather than sending them after Karist targets, combined with essentially sacrificing his Firefly unit by sending them out into the open unsupported allowed Jon to make the most of the mission with his more aggressive Karist units. While the Scarecrows did their best to even up the playing field, the rapid casualties inflicted on the Epirian force allowed Jon to very quickly rack up enough VPs for a turn 2 victory.

You're viewing a weblog entry titled Battle Report - Karists vs Epirians. If you like this entry you might want to: