As we've mentioned before, we're currently beavering away on the second edition rules for Maelstrom's Edge, and over the coming months will be showcasing changes and refinements, and asking for feedback on different directions for the rules. Previously, we had a brief look at the change to model characteristic profiles. This time around, we're looking at weapon profiles!

In V2, suppression will have a much bigger impact on how your units perform on the table (more on that later!). As a side effect of that, being able to suppress enemy units becomes much more useful. We have allowed players to capitalise on this by intruducing a 'Suppression' (SUP) stat to the weapon profile. 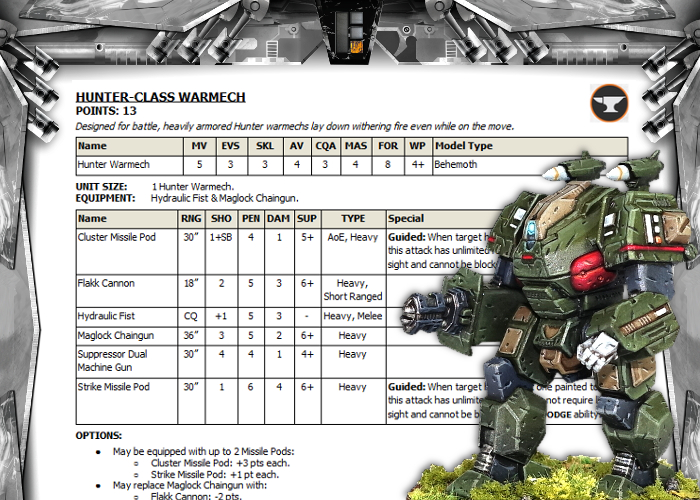 You will now be able to choose between two different types of shooting attacks. You can fire normally, which applies suppression to the target unit if it is hit and/or damaged similarly to how it works in V1. Alternatively, you can choose to use 'Suppressive Fire', which doesn't cause direct damage like normal shooting, but allows you to roll against the weapon's SUP stat and increase the target's suppression for each successful roll. This represents your unit spraying the enemy with fire to force their heads down, rather than taking carefully aimed shots.

This gives you some tactical choices when you are electing to shoot with a unit, and also means that units armed with low powered weapons aren't necessarily completely useless against tougher opponents - you might not have much chance of wounding them with regular shooting, but you can potentially still use suppressive fire to soften them up for other units, and if their suppression goes high enough they start taking automatic damage!

If you want to know more, you can join in on the discussion of the new rules, and download a copy of the current draft rules for V2, in the development thread on the DakkaDakka forums here. You can also post any feedback in the Comm Guild Facebook group here.

You're viewing a weblog entry titled Maelstrom's Edge V2 Rules - Help, I'm being suppressed!. If you like this entry you might want to: