One thing that we see quite frequently is a misunderstanding around cybel energy - the energy which Karist Angels feed upon, and which is harvested from the cybel tunnels at the network's irising gates. The Maelstom's energy is similar and related to cybel, but is highly volatile, unstable and unusable, with far too much volume to be contained in any way. 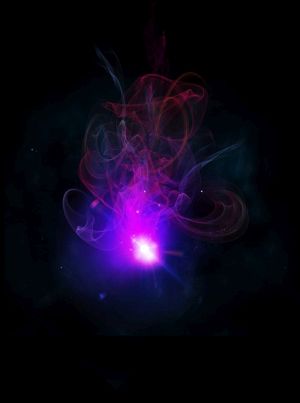 The energy that forms the cybel network is known as cybel energy, and is naturally occurring. Until gateways into the cybel network were first opened, cybel energy was rarely found in real space, but the first travellers through the maze of tunnels between stars soon learned that the medium of the tunnels was a powerful energy source, and today there are few space vessels that don’t use cybel energy in their shields and engines.

Natural cybel energy will annihilate with conventional matter and energy, ultimately eliminating both in a burst of heat energy. The more cybel energy and conventional matter interact, the greater the resulting explosion. A few litres of cybel losing containment creates an explosion large enough to raze a city block. It is for this reason that cybel energy is carefully controlled and typically not allowed planetside without refinement.

Cybel energy is sometimes classed as ‘Raw’ in the wild and ‘Refined’ after magnetic processing. Raw cybel energy can be harvested from the cybel network, contained or repelled by electromagnetic fields. The refinement process uses a series of concentrated electromagnetic fields to align the energy, in a similar fashion to the polarisation of light. The refining does not change the energy itself, but reduces its volatility, allowing it to be used as a fuel source when contained in various shielded vessels from small battery sized objects to huge drums for industrial and starship use, and lowering the risk of accidental discharge.

In appearance, natural cybel has purple and blue hues with a wispy texture, appearing to the naked eye like tendrils of nebulous smoke or mist. When pinched in an electromagnetic vice inside a fuel source or reactor, the energy of small reactions can be amplified and harvested as heat, driving more conventional engines and devices. Spaceships also use magnetically contained shields of cybel energy to protect their hulls, both whilst travelling through the cybel tunnels and in space combat.

The Karist Enclave, obsessed with the nature of cybel energy, have taken to using it to power their weaponry. Due to the long-term detrimental health effects of exposure to the energy this is frowned upon by other societies, but there is no denying its effectiveness as a weapon, burning into its targets and annihilating any mass it hits with devastating effect. Although cybel energy has been known by galactic civilisations for millennia, another type of cybel energy has only recently been discovered by the founders of the Karist Enclave during their escape from a Maelstrom-infected collapsing cybel tunnel. The wispy, pink energy has a peculiarly unreactive nature, allowing non-lethal physical contact with little more than superficial burns, although it also seems to interact with the human nervous system. Most who experience contact with na-cybel have euphoric feelings, a narcotic like high, and out-of-body experiences. The Karist priesthood claim that this is a glimpse of ascension, whilst others dismiss it as a dangerous drug addiction.

To clarify the above rulebook excerpt further, there is 'raw' cybel energy - that which can be harvested from cybel tunnels, there are various grades of 'refined' cybel energy, which have differing levels of volatility, with a mid-level refined version being the type which is fed to Angels, and the least volatile being 'na-cybel' - used in Karist rituals, and finally the energy of the Maelstrom which is like a super volatile form of raw cybel energy, unusable and exploding forever outwards.

You're viewing a weblog entry titled Background Fiction - Cybel Energy. If you like this entry you might want to: